Tis the season for filing cards

I don't watch parades or college football. I don't make goals or start new diet plans. I don't curl up in a corner and moan with a hangover.

Mostly what I do is organize and file cards.

This is the season for that. I usually start putting away the previous year's cards in November or December. I got a late start this year so I'm still doing that now. I'm in the middle of filing 2017 Topps flagship with Update, Allen & Ginter and Heritage still on the horizon. Everything else has been filed and stored.

When I file cards I first record them in my favorite archaic filing system, an ancient Microsoft Works Spreadsheet that will likely die with this computer. I don't like the fact that I am risking the disappearance of my filing system, but I am already about two-thirds of the way into finishing it and I don't want to restart now.

My fear in recording cards online is along the lines of what happened to Zistle. If the site disappears or stops working then now what? I like relying on myself when it comes to my cards. I've often thought about adding part of my collection to Trading Card Database, maybe something like my non-baseball cards. That way if anything happened, it wouldn't be quite as crushing.

So anyway, what is my very dated system for filing my cards?

It's pretty simple and rather boring. I have basic notations for each kind of card. I grabbed a card that I just filed. This is a base card from a flagship set. These are the easiest cards to note and file. For Teoscar Hernandez's 2017 Topps flagship card, I simply note ...

This is the way just about all flagship sets are noted, regardless of manufacturer.

The '90s started complicating things, but early on it wasn't too difficult. For Pacific and Pinnacle, it's:

But subsets need special notation. And spin-off sets (like Fleer boxed sets) need special listing, too. And, of course, all those inserts complicate recording as well. 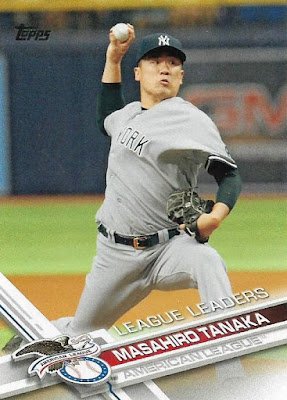 This one is pretty straightforward. It's a subset in 2017 Topps for various league leaders. Masahiro Tanaka's card would read: 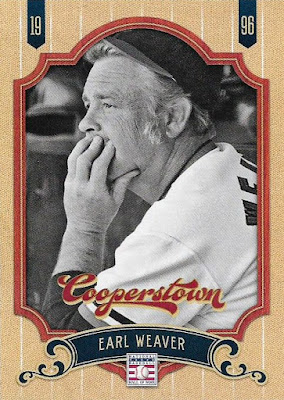 I differentiate a card company's various brands with a capitalized abbreviation within parentheses. The above Earl Weaver 2012 Cooperstown card from Panini looks like this:

I'm always looking to further abbreviate notations because the longer the listing, the bigger pain it is to update the spreadsheet. So, often I'm tempted to write: "12Pan(C)," but then I get concerned that Panini will put out another "C" set and create mass confusion on my spreadsheet (as if anyone besides myself will look at it).

The biggest pain-in-the-butt cards are the further subsets of subsets cards. Think parallels of inserts for example. There are reasons why items such as this should be abolished and one of them is the havoc it creates in my filing system. 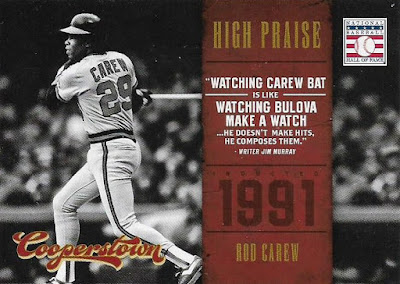 This one isn't too bad. It's a simple insert from Panini Cooperstown. So it is listed as: 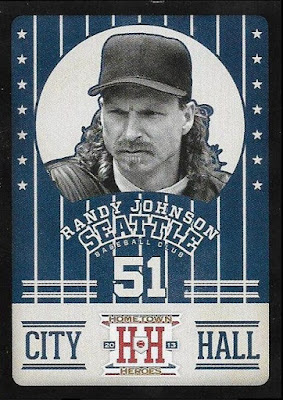 This Randy Johnson insert from 2013 Panini Hometown Heroes is a bit more complicated.

See how much modern card-making has complicated our lives?

Card back variations are pretty lengthy as well. 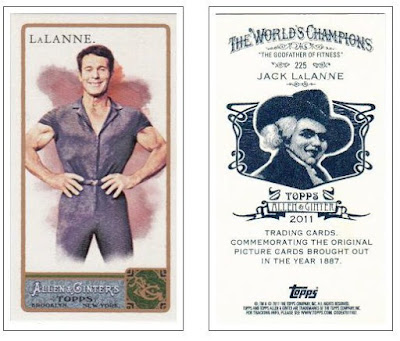 This fine specimen from 2011 that resides in my frankenset mini-binder reads:

This makes for pretty tedious updating, but it's what I've got.

And I do know up to this point that I have 51,941 different cards recorded (with many more to go).

Since I don't work in a profession that makes regular use of filing via computer (such as accounting or programming), I don't have the knowledge of how to make even my outdated filing system work for me.

But at this time of year I keep pressing on in hopes I can get it all finished and somehow transfer the entire thing to something more current in as smooth a process as possible.

Or maybe I should delete the whole thing and start from scratch on Trading Card Database.

Laurens said…
I use Google Sheets to list out cards in my collection - I figure Google will be around for longer than any us will be and if there comes a time where they aren't offering the services anymore, they will let me know in advance so I could save my files offline.
January 1, 2018 at 9:01 PM

Brett Alan said…
I'd suggest just occasionally emailing your spreadsheet to yourself. That should be easy to retrieve if needed. Old MSWorks spreadsheets should still be readable by newer programs (Excel or Open Office or what have you).
January 1, 2018 at 9:09 PM

Billy Kingsley said…
I keep my collection records on paper...and Excel, which I have saved in four places including on Google and Amazon drives...and the Trading Card Database. I learned my lesson from the "olden times" of floppy disks, and losing everything when the disk holding my only copy corrupted. I only have baseball and football and some hockey and multi sport on the Database. I plan to get them all on paper and Excel some day. The abbreviations you use would drive me insane in less than a week, lol. I'm not an abbreviation person. I don't even say or write Chevy, it's ONLY Chevrolet to me, for example.
My excel lists will be a topic of several posts through the coming year, I have a couple of screenshots coming up this week. I'm going to be doing a lot of excel work over the next few months, but I really enjoy doing it...I can type about 1500 cards a day. I have about 140,000 left to type.
January 1, 2018 at 10:28 PM

Fuji said…
I would love to see how you would distinguish all of the different 2017 Topps Aaron Judge cards. Glad you didn't wake up moaning with a hangover. You're off to a great start in 2018. Happy New Year!
January 2, 2018 at 12:50 AM

Nick said…
One day I hope to go through my collection and do an inventory along the same lines as what you described in this post. My memory is fairly good when it comes to remembering what I have and what I need, but it's far from perfect. At the very least, I'd like to catalog some of my bigger player collections -- which I was starting to do when Zistle crapped out.
January 2, 2018 at 1:51 AM

Anonymous said…
If Works allows this, I'd also save a copy in CSV (Comma Separated Values) format. You'd lose any formatting you might have, but the data would at least be in a fairly universal file format... just in case whatever comes next is not able to read MSWorks files. Microsoft isn't going to be backwards-compatible with Works files forever, at some point they're going to say "Too bad, so sad".
January 2, 2018 at 7:21 AM

BobWalkthePlank said…
What you are doing is really the next big step for me. I'm not quite sure how I'm going to get there, but I hope one day to at least attempt a detailed record of what I have.
January 2, 2018 at 8:00 AM

GCA said…
My inventory is mostly in my head too. Thought I've passed the point where I remember everything I have. I now find stuff I don't remember getting. I've wanted to put it all down in some form even if just for insurance purposes. (They don't comprehend the idea of complete sets - "Just put down your big money cards"). The toughest part would be my player collections too.
January 2, 2018 at 9:01 AM

Bru said…
I’ll throw a vote in for TCDB here. I do keep a spreadsheet for parts of my collection though - autographs and PCs mainly. I’ve got that saved in a folder that is in my Dropbox, so the latest version is always synced and stored online. I use Google Sheets for my wantlist. With the mobile app I can access it anytime, which is handy if I am ever lucky enough to be at a show or shop.
January 7, 2018 at 9:11 PM