First thoughts on who's first 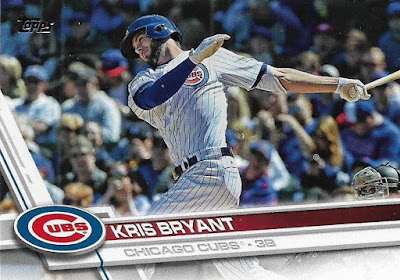 Here is a topic that I don't care about at all, but it involves making a list -- or rather, updating a list -- so it automatically makes it interesting to me.

Topps' Twitter site has begun stirring about the 2018 flagship set, showing a couple of very uninspiring images, in advance of the release date, which I believe is January 31st.

Before the first cards hit shelves, Topps will announce who will appear on card No. 1. The honoree will be the player who received the most votes in Topps' annual exercise, which has been going on for the last three years.

I've never voted in this because I don't care. I'd actually rather have Topps pick their own card No. 1 without having the masses get their runny noses all over the thing. But, either way, we're probably going to get Aaron Judge as the No. 1 card. I'd be stunned if anyone else is there.

I hope the Judge card will look better than the 2017 No. 1 card. In recent years, the first card has looked fairly decent, but the Kris Bryant flagship card (the first horizontal since 2010) is kind of a cropping disaster.

Judge's selection will be the 36th player to receive a solo card at the No. 1 Topps spot.

Here is a list of the first card in each year of Topps flagship:

That John Lackey selection still looks out of place. Also, how about that three straight years of Brewers from 2010-12?

Alex Rodriguez still has the most solo cards at No. 1 and has appeared at No. 1 more times even when you factor in players who shared space with another player on a No. 1 card.

I come from an era when the first card was a specific reference to something that happened during the previous season, a record-breaking feat or league leaders. I prefer that over a base card of a particular star.

If Aaron Judge's No. 1 card could be a record-breaker card, then I would enjoy that quite a bit.

Come on, Topps, there's going to be a dozen Judge cards in flagship anyway. Make card No. 1 a record breaker.

Mike Matson said…
It's funny you mention the likelihood of multiple Judge cards.
I saw a debate on Facebook about the value of Judge's autographs. Basically it was "they're worth big money, whoever says otherwise must hate him and the Yankees"
I think it's more a case of Topps hitching their horse to him and beating that money horse to death until those "valuable" cards are worth about as much as Kevin Maas..
January 5, 2018 at 8:57 PM

Old Cards said…
Unlike you and Nick, I prefer a player as the number one card, preferably a player that made an impact the previous year. As far as I am concerned, a card is a chance to see a player up close. Not in action, but standing still by a batting cage or a dugout. League leaders, record breakers, highlights, team cards, World series cards, etc. are a waste of cardboard. As a kid, I hated ripping open a pack and seeing these cards. I want player cards. In my mind, that is what the hobby is all about.
January 5, 2018 at 9:49 PM

Billy Kingsley said…
I think they should be sorted in jersey number order with each team listed alphabetically. So whoever has the lowest number on the Arizona Diamondbacks, would be #1.
January 5, 2018 at 10:09 PM

Once a Cub said…
Playing devil's advocate, throw in a scrub at #1. Whether its first in your box, or the first one in your binder page near the rings, its more likely to get dinged.
January 6, 2018 at 2:22 AM