The race to complete my first Fleer set 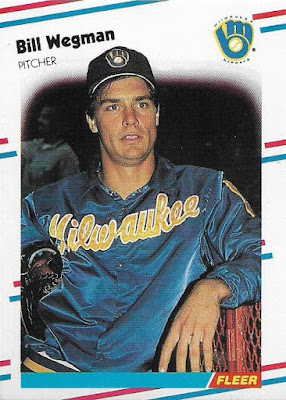 Believe it or not, I have never completed a Fleer flagship set during my 40-plus years of collecting.

Much of the reason for that is growing up during the time of the Topps monopoly. I didn't know Fleer existed until I was 15 years old.

Even after the arrival of Fleer and Donruss, I kept a bias toward Topps. Topps got my money.

Awhile ago I said I was open to receiving Fleer cards from the 1980s. Nothing from 1989, mind you, but everything else was fair game. And I announced that I would specifically try to complete Fleer sets from 1981, 1984 and 1988.

You just saw a stack of 1981 Fleer that I received from ARPSmith's Sportscard Obsession. Hopefully I'll get a want list up for that next week. Meanwhile, the 1984 and 1988 bids are coming along even better, thanks to this package and that package, respectively.

After the dust had settled from those two monster sends, I was down to needing just two 1984 Fleers and just under 100 1988 Fleers to finish off both sets.

Two compared to just shy of 100 seems like no competition, right? Surely I would complete 1984 Fleer first, right?

Ah, but on the availability meter, 1988 Fleer registers exponentially higher than 1984 Fleer. It's only a four-year gap, but the increase in cards issued per set had to multiply by a thousand times in that span.

The race was on. 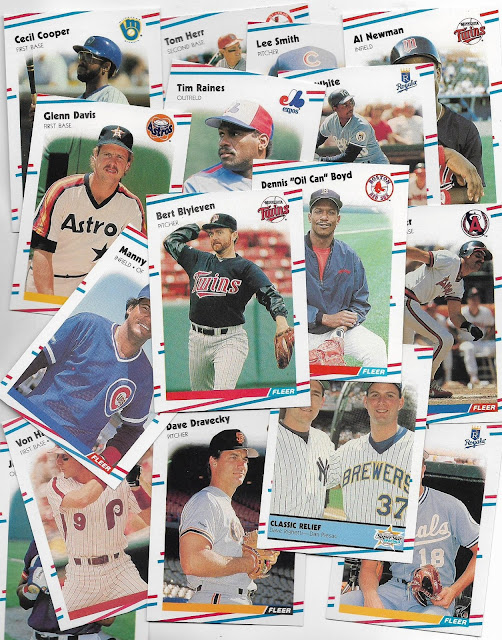 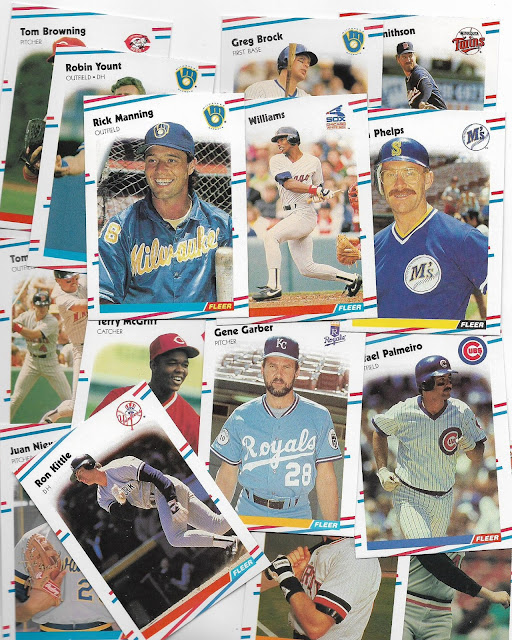 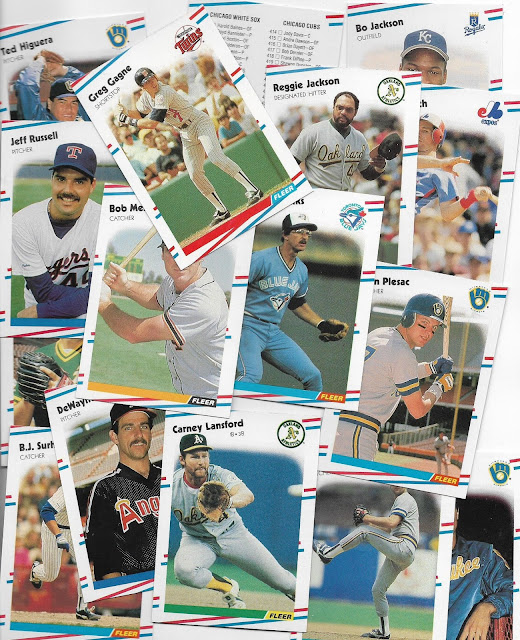 I was now under 50 needed cards to complete 1988 Fleer and '84 Fleer was still stuck on two cards.

Then, not even a couple of days after the first '88 Fleer salvo, a package arrived from Cards On Cards.

Guess what was inside? 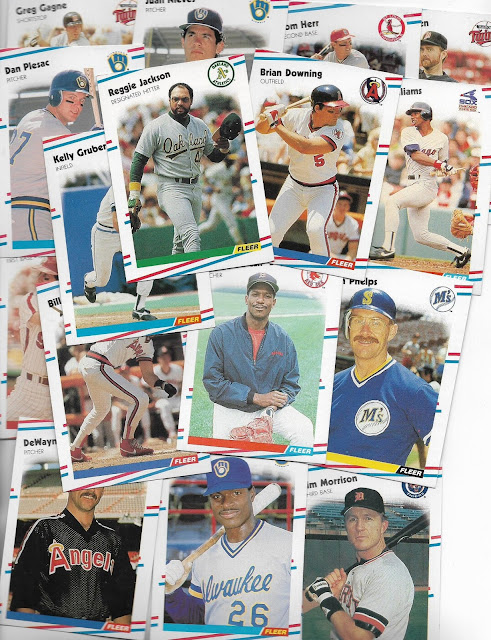 More 1988 Fleer. And they were already multiplying! 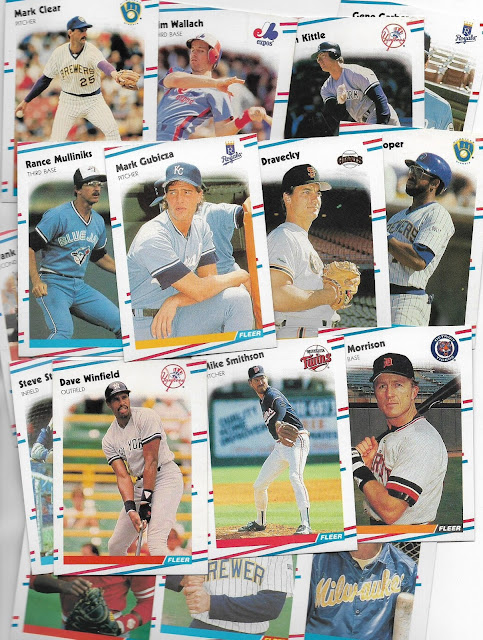 After the dust had settled again, I determined that I needed just six more cards to finish off the 1988 Fleer set.

Everyone let 1984 Fleer think about that for a few days. It was many hours of uncomfortable silence when suddenly, this afternoon, I heard the repeated blast of a trumpet. I think it was the theme to Duddely Do-Right.

Only this time, Duddely was truly coming to the rescue, in the form of a package from gcrl.

Out from that package arrived ... 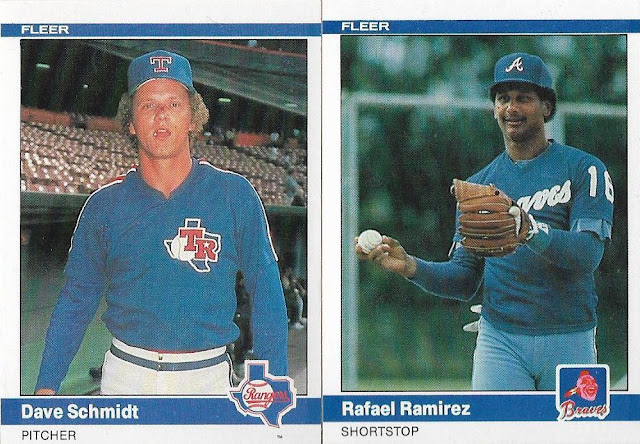 I finally had completed a Fleer set after these many years. Dave Schmidt is absolutely aghast about it.

Completing the 1988 Fleer set won't be far behind. In fact I can hear people scurrying among their junk wax-infested bedrooms to find those last six cards.

Section 36 and Cards on Cards may have failed in their mission to make 1988 Fleer the first Fleer set I completed, but they added some notable Dodgers cards to their packages. 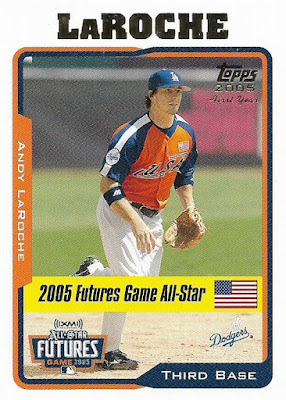 I'm partial to this 2005 Topps Updates & Highlights card of Andy LaRoche because who knows how years it would've taken for me to be aware this card existed. 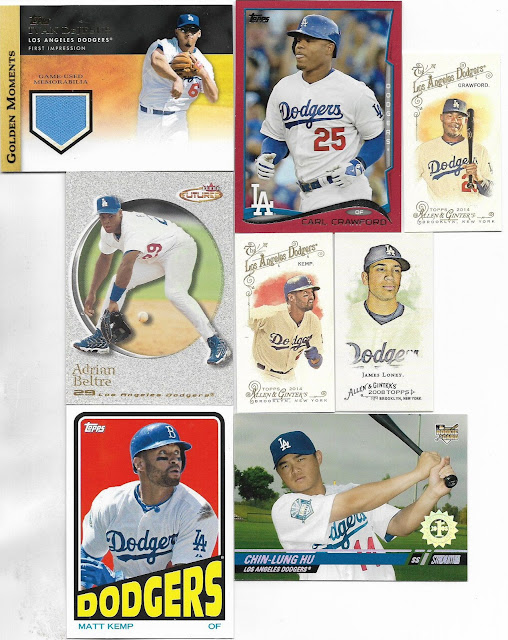 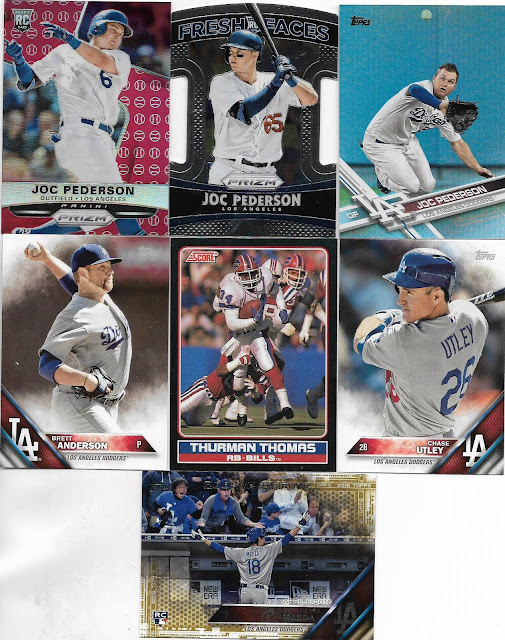 And here are some items from Cards On Cards. That Thurman Thomas card really stands out, not only because it's the only football card, but it's the only traditional card among all of the modern-card weirdness.

I also received some Dodgers cards from gcrl, naturally, because he's a Dodgers fan. But I'll save those for a later post.

Anonymous said…
Congratulations on completing 84F! At first I was surprised that you'd never completed a Fleer set, but then again I like 1980's Fleer and I've only completed 1981 (and bought several factory sets later in the decade, but those don't count).

I've been meaning to write a "1981 Fleer Appreciation" post for a while, this is lighting a fire under my butt.

Billy Kingsley said…
Congratulations! I always considered fleer my favorite company while they were in business. I think that's swung around to Topps now, even though I don't get much from them anymore. There's still plenty of older releases that I need to chase cards from.
January 27, 2018 at 1:45 AM

I mean, THE GREATEST CARD EVER MADE is in the '89 Fleer set. I don't even have to tell y'all what card that is, even though it shows up 3rd for me in Google auto-complete these days, behind Griffey and Michael Jordan.

It's also got your 1988 World Champion Dodgers in it (though I've no doubts that you've got like 8 of that team set).

And don't get me wrong, I know you're of the mind that rookie cards can go scratch, but Griffey, Smoltz, Johnson, Biggio, Sheffield, and yes, even Ramon Martinez for your Dodgers (see above comment on how many of this card you probably have, and I get it) are all in there.

It's not an awesome design, but there are certainly worse ('93 Fleer comes to mind; we don't talk about how utterly boring that set is often enough), and maybe even worse that year (I don't really love '89 Topps).

Ultimately, it's still your collection, and if you wanna give '89 Fleer the finger, you absolutely can. I'm just curious why, and I can't remember you ever really going off on it on this site.

night owl said…
I don't like sets that use gray as a dominant color in their design and '89 Fleer uses that color like no other set. It dominates the card. It's ugly. You're right, I have all the Dodgers I need from that set (thank goodness Fleer made a different design for the World Series set that year). You're also right, I don't care about rookies, and anything notable about cards from this time (think Ripken, think Griffey) has been so overdone that it kills my interest. I don't really hate '89 Fleer, but I need some sort of interest in a set to try to complete it. It's not there for '89 Fleer.
January 27, 2018 at 3:05 AM

acrackedbat said…
Your pursuit had me looking through my cards. I own ZERO cards from 88 Fleer. Not sure how this has happened. My feelings towards this design are somewhat ambivalent yet 92 Fleer has been wooing me. STOP IT FLEER!
January 27, 2018 at 9:45 AM

Section 36 said…
Congrats on completing the set! Glad I was able to help you inch closer towards your second.
January 27, 2018 at 7:16 PM