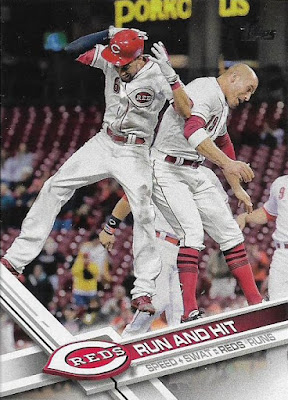 You would think that it would be quite easy to find night cards in new products these days. Most games are at night, it's not difficult to shoot them anymore.

But actually, it's not that easy to find them. Or, rather, it's not that fun. My guess is at least half or even a majority of the cards that appeared in 2017 Topps flagship are night cards. But that's all it is, a guess.

That's because for several years now, Topps has issued cards with closely-cropped images. You get the player and that's it. I've discussed this many times prior. Backgrounds are in short supply. And backgrounds are what makes a night card.

For night cards, I look for lights, the night sky, tip-offs, but also the aspects that make a night card fun. I could determine night cards from closely-cropped images based on the lighting on the helmet or the uniform, but that's not fun and doesn't really announce itself as a night card.

So I haven't bothered much with night cards for the last couple years of cards. The night card binder is suffering a bit, too.

There are a few night cards here and there, the few cards in which Topps actually zooms out. And I pounce on those when I see them. The "Run and Hit" card in 2017 Update is one of those cards. On that card, Billy Hamilton and Joey Votto are celebrating at the end of a night game under a sign advertising pork goodies of some sort. (I'm hoping that reads "Porkos R Us"). 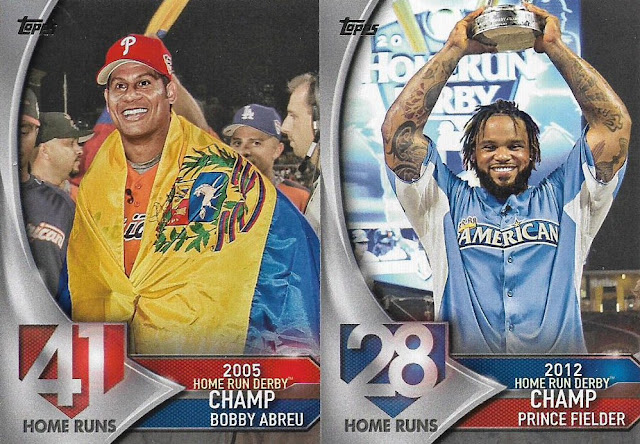 These are the most likely modern day night cards: An insert recognizing a known night event, in this case, the Home Run Derby.

The stunning part of these two cards is that they are inserts and they actually make the Night Card Binder. Competition for the first 20 or so slots in the binder is fierce because of all the inserts numbered 1-20. 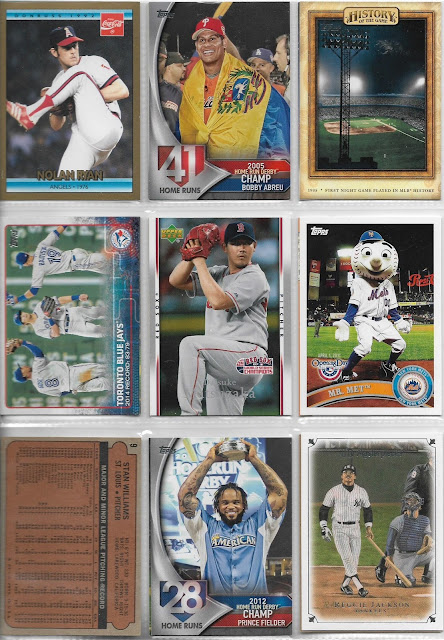 Abreu and Fielder slide right into empty slots at cards 11 and 17!

Lots of fun cards on this page. The only ho-hum one is the Blue Jays card at 14, but at least there's a scoreboard in the background.

I still need a night card for No. 16 on this page.

Here's hoping it's something that actually shows a night game in all its splendor.

Adam said…
The sign on the concession stand in the background reads "Porkopolis", a ode to the 1800s when Cincinnati was the chief hog packing center of the country and there were literally pig roaming the streets. All the concession stands at GABP have funky names like that.
January 8, 2018 at 8:04 PM

Fuji said…
I've got your back. I hate closely cropped photos too. By the way... that Reggie UD Masterpieces card is amazing. I already left this comment on Corky's blog... but damn I miss UD having an MLB license.
January 8, 2018 at 11:40 PM