April 06, 2016
I've mentioned a number of times that I barely collected cards between 1995-2005. It's my dead period, my "stone age" of collecting. At most, I picked up 3-6 packs some of those years but they didn't stir the urge to collect again.

I've never had a name for that period, but now I do.

I call it The Rusty Greer Era. 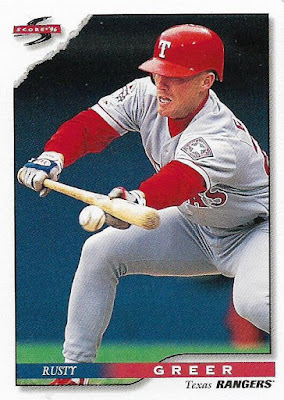 I recently finally finished organizing and recording all of the cards that Johnny's Trading Spot sent me a little while ago. One of the benefits of receiving random cards of little connection to your collection is you end up with your first card of players you should have owned cards of a long time ago.

The card you see above is my first Rusty Greer card. Greer played 1,027 games and this is my first card of him.

That is because Greer's career, from 1994-2002, landed smack in the middle of my dead collecting zone.

For years I've been aware that I didn't own a card of Greer, just because I knew he was a fairly prominent major leaguer and it was odd for me -- someone who has been a set-collector virtually all of his collecting life -- not to own a card of a fairly prominent major leaguer. But I was never inspired to get a card of Greer. He wasn't the only one. There were just too many players from that time period for which I lacked a suitable number of cards.

But turning up this Greer card made me want to do some research. What players had the most games between 1995-2005, the period in which I didn't collect, and how few cards do I own of those players?

Here is the top 20 in games for that period:

For most of those players, I own a fair amount of cards, particularly for anyone who was a Dodger (boy, do I ever). But there are some players there who jump right out because of their relative scarcity in my collection. 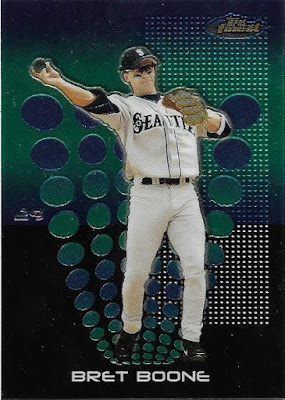 Bret Boone in particular. He totaled 1,530 games during this period, 1,780 for his career, and I own seven cards of him. That could be the worst games-played-to-cards-owned ratio in my collection.

The highest players on the games list featured careers that extended well beyond 1995-2005, so they roamed into strong collecting periods for me, either early in their careers or late in their careers.

There are other players, whose careers weren't as long but were still notable, who don't fare nearly as well in my collection. 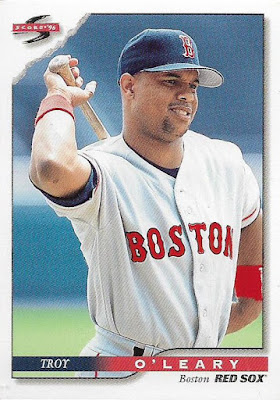 Until this card also arrived from Johnny's Trading Spot, I did not own a Troy O'Leary card. O'Leary played in 983 games between 1995-2005, which is 128th on the list. Meanwhile, Rusty Greer had 897 games (151st) during that period. So maybe I should be calling this "The Troy O'Leary Era."

There are other players with productive careers from this time period for which I own precious few cards: 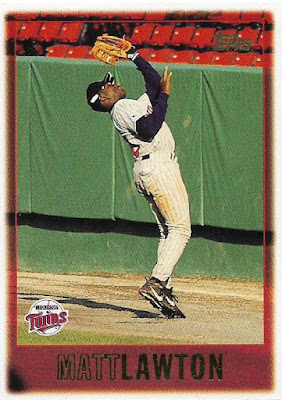 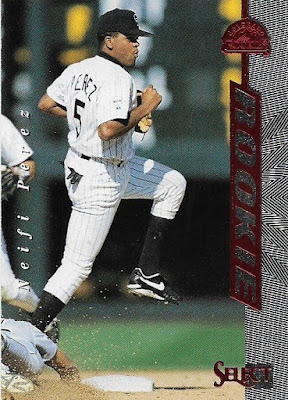 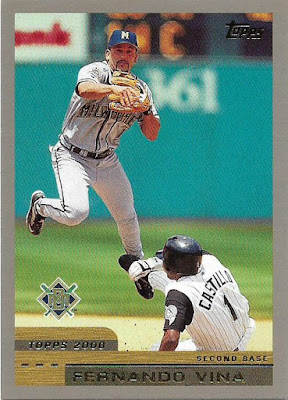 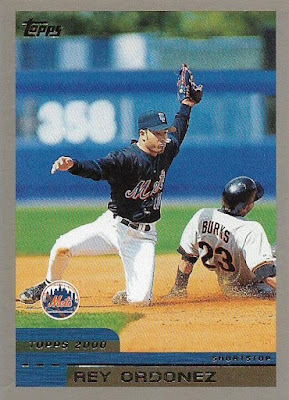 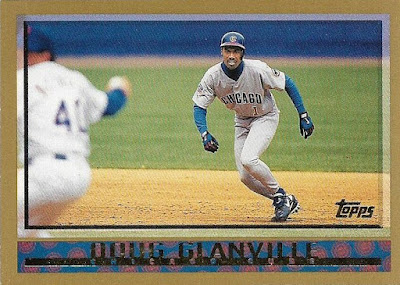 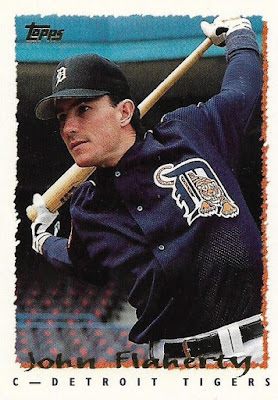 
This may not mean a whole lot to player collectors or to people who simply collect one team, but for set collectors, part of the joy of set-collecting is having a wide representation of the major league season each year, which means your collection reflects most of the players of each period.

I was a little freaked out last year when Kelly Stinnett was suddenly named the manager of our little podunk independent league baseball team here and I didn't know whether I owned a card of him. This would have been a big disaster in the event I ever got to talk to him (I didn't).

I did manage to scrounge up one card of Stinnett: 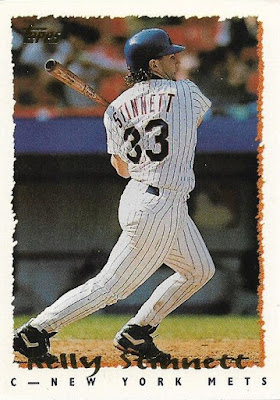 But that didn't seem like an adequate representation for someone who played 14 years in the majors.

The No. 1 question I had with this research is which player totaled the most games between 1995-2005 and is NOT in my collection?

That player turns up in the 146th position.

I can't show you a card of him because I don't have a card from him.

Here is a short list of the semi-notables from this period for which I don't own a card:

You may say, "so? Shane Halter was a part-timer player, I bet he's missing from a lot of collections."

But this set-collector knows that I without a doubt own cards of Marv Foley, Elrod Hendricks and Carlos Lopez -- all of whom had fewer games than Halter -- because they played between 1975-1985, as fertile a collecting period for me as 1995-2005 is fallow.

Now, I am certainly not looking to add any cards of players from the 1995-2005 period to my collection, although somebody somewhere is going to dump a bunch of Einar Diaz cards on me now, I just know it. They think they're so funny.

I didn't collect cards during 1995-2005 for a lot of reasons. But one of the reasons is it's not a pleasant period of baseball history for me. Yes, it's the steroid era, but it's also a time period where the Dodgers weren't all that fun, and a lot of teams that I despise did well.

I don't need reminders of that on my cards, and that's why my collection lacks players from this period, even while I've retroactively added plenty of 1995-2005 cards for my Dodgers collection.

This was just a little exercise for this set collector. I thought it was pretty interesting. And if any other collector went an extended period without collecting cards, it might be fun to see who is missing from their collection.

At the very least, I got a name for that era, other than "those years when I didn't collect cards."

I'm so glad I'm out of The Rusty Greer Era.

Commishbob said…
Well darn if your 'dead period' doesn't dovetail with mine. Looking at your first list I thought Garret Anderson was a basketball player. Of the guys whose cards you don't own I know Richard Hidalgo because I saw him in Houston but the other guys are mysteries to me.

Were you following baseball but not collecting or, like me, just quit the game for awhile. I gave up with the lockout and I've still never really returned to being the fan I once was.

John Bateman said…
Something is wrong here, Palmeiro had at least 5000 at bats - it appears the list should he HITS. I think everywhere the word At Bats appears should be replace by the word hits or could this possibly be GAMES
April 6, 2016 at 8:53 PM

night owl said…
Yeah, it should be games. I did this research several weeks ago and didn't mark down the category so I'd remember. It's all fixed.
April 6, 2016 at 9:04 PM

night owl said…
I still followed baseball, although a lot less than I did before, during that time. I probably follow baseball now as much as I did in the early '80s, but it's not as fun as it was then, for a few reasons.
April 6, 2016 at 9:12 PM

Unknown said…
I halted card collecting somewhere around 2002. I have nor completed a Topps set from 2003-present. I lost interest with the circus like parallels and variation cards. I still like to piece together the older sets. I have no idea who most of today's players are unless they show up on a game I am watching.
April 6, 2016 at 9:24 PM

SpastikMooss said…
Man, your dead period is my falling in love with baseball period. I saw Troy O'Leary hit a game winning homer for the Expos. I loved Quinton McCracken for the Rockies. Bret Boone was a family fave. Tony Batista was just a beast. Matt Lawton was similarly a fan fave since we saw him play on a business trip of my Dad's to Minnesota. And Rusty Greer was a toughnosed OF who ran through walls for balls - I always thought he was going to be something great.

So if you ever decide to change it, you could call it the SpastikMooss era lolol.

Additionally, do you (or anyone) remember the dude who used to supercollect Richard Hidalgo? He was one of the first bloggers I talked to a lot, and he's gone now, but he had a crazy high number of cards of the guy, and I always thought that was a fairly interesting collection.
April 6, 2016 at 10:45 PM

Community Gum said…
Geez. I'm impressed that you can pull those card stats so easily. I can't imagine how your card inventory system works that allows you to say that with such certainty. I don't even know how many Maddux duplicates I have, let alone how many cards I have of some random players stored in boxes.
April 7, 2016 at 12:45 AM

Stubby said…
The thing about your "dead period" is that it was right in the heart of the Oprah Winfrey era--which is what I call it because..."You get a card, and you get a card, and you get a card...everybody gets a card!" You have one Rey Ordonez card, but he had almost as many cards of him as he has games played (and, as a Mets fan, I've got hundreds of them). Even players who played no major league games got cards (heck, there are guys who played no major OR minor league games with plenty of cardboard). In one way, I think that's great. There are lots of players from the 50s and 60s who never got a card (or only got one belatedly from SSPC or Fritsch's One Year Winners). Where do you go to get a card of Rich Puig (other than that crappy little WIZ card)? On the other hand, when I go through my Mets binders and have endless pages of some guy who pitched maybe 10 games for us (if that), its a little tiresome. And someone like John Franco practically needs his own binder. OK, he was good, but c'mon.

When I was doing tribute cards last year, I thought the story of Tyler Sash (football Giants) was rather sad so I made him one. I figured here's a guy who wasn't a top draft pick who played a non-glory position and pretty much only played special teams for less than two years before his career was over. He probably never got a card. Then I checked the TCDB. He had at least 114.
April 7, 2016 at 1:01 AM

Brett Alan said…
This is a dead period for me, too. I really haven't been an active collector since the 80s, but I have a fair amount of junk wax and now I'm buying a little bit of current stuff. But I have very little from that era. I don't even have an Edgardo Alfonzo card, and he's one of my all-time favorite players! Gotts do something about that. B^)
April 7, 2016 at 1:26 PM