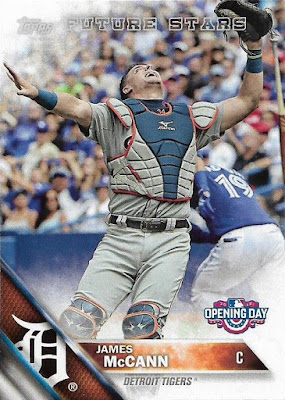 Although I far prefer cards to any other kind of collectible and generally discourage people from sending me memorabilia, I admit that memorabilia can stir a conversation like cards can't.

Bring up a card with noncollectors and their first question might be "how much is it worth?" Either that or they're bored instantly by whatever you have to say. But memorabilia? It seems to naturally hold the attention of the noncollectors and even nonsports people. I don't know what it is. Maybe people can relate to clothing more than cardboard? Or using equipment?

I don't get it. Because to me, a card with a photo on it tells many more stories than a hat or a glove. But it's apparent that memorabilia draws a wider interest.

I received just such an example from Rod of Padrographs recently. I admit it's very cool and a definite conversation-starter. And it's one of those memorabilia items that I will hold onto forever. And there aren't many noncards that receive that kind of treatment in my collection.

But first, let's see some cards that Rod sent along with that memorabilia piece. 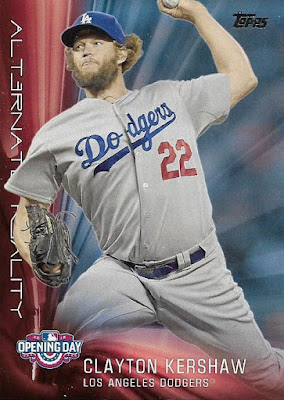 Believe it or not, the only mass-produced Dodger card in the package. You'll see a couple slightly more exclusive Dodgers in a moment. 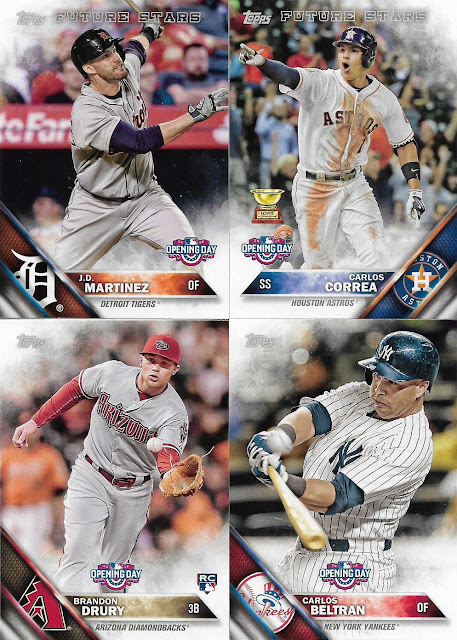 The Kershaw came with a handful of Opening Day base cards, including these four night cards. Or at least I think they're night cards. There's so much smoke in the way. The players better get out of there before the stadium fire short-circuits the lighting. 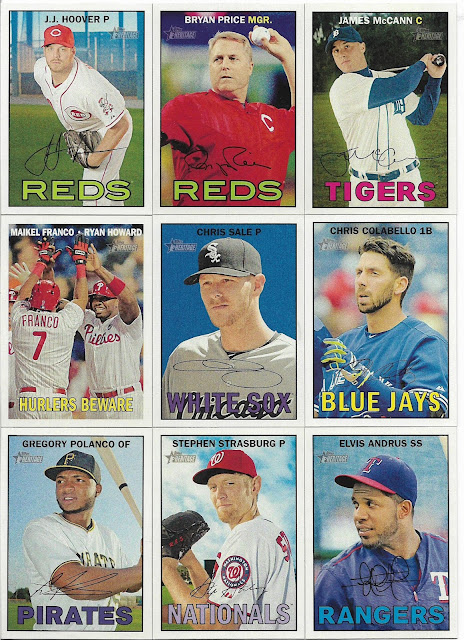 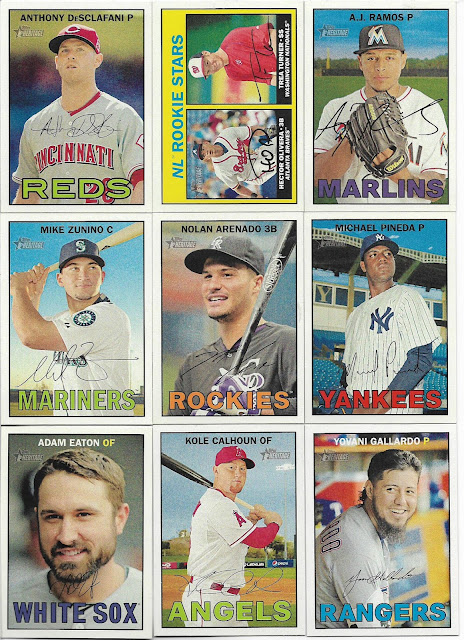 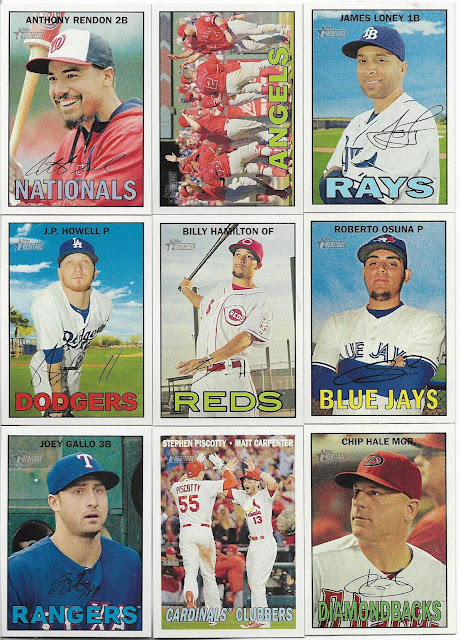 Rod apparently read about my interest in 2016 Heritage. He sent a healthy stack. That's not even all of them. (Yeah, I guess there was another Dodger in the package, but Howell is going toward the set, not the Dodger binder).

These look very nice all together. Still not going to attempt to complete it. But I did buy a hanger box today, so I'm invested just a little. 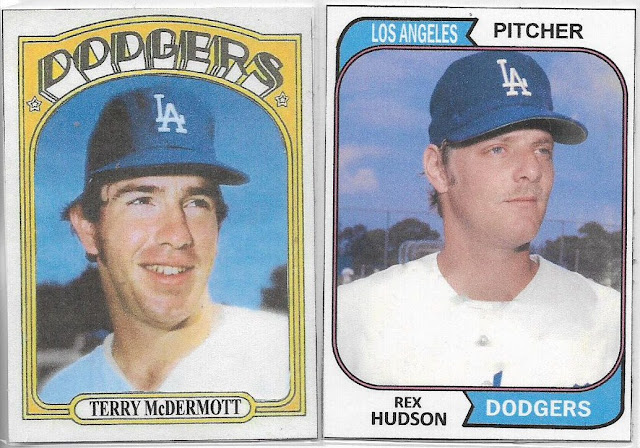 These are two custom-made cards of a pair of '70s prospects who played only a handful of games for the Dodgers. In Rex Hudson's case, it was just one game.

I especially appreciate the Hudson card because he's a legendary '70s Dodgers cup-of-coffee guy and you don't see many pictures of him.


Hudson, who was nicknamed "Billy Jack" because of his taste in cowboy hats like the movie character, tore through the minors and was the guy the Dodgers called up when Tommy John famously hurt his arm. Hudson pitched in one game for the Dodgers, against the Braves. He got through a couple of innings, then fell apart, giving up homers to Hank Aaron and Dusty Baker. He never got another shot.

There's Billy Jack in the 1975 Dodgers yearbook. I've known about him since my teenage years. It's about time I have a card of him. I was about ready to cut this photo out and make my own.

The Hudson custom card is probably my favorite part of the package, which is saying something because now I'm showing off the memorabilia. And it's pretty great.

This is what showed up in a big ol' box: 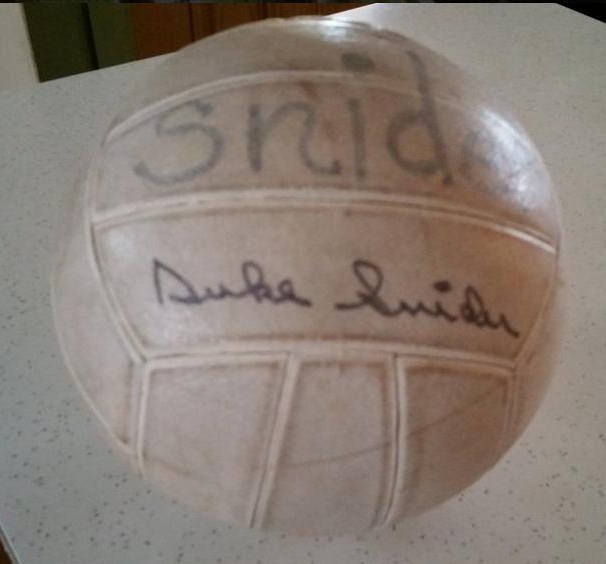 That is a volleyball. And it's signed by Duke Snider. I'd recognize his signature anywhere.

Even my wife took a look at that.

Rod was kind enough to send a certificate of authenticity with the back story on how this ball happens to feature Snider's signature.

In short form, Rod became friends with a man, who was friends with his wife's family. The man once lived next door to Duke Snider and his family in Fallbrook, California. Snider's youngest daughter (Rod spells it "Donna" but it's actually "Dawna") was coaching a high school volleyball team at the time and the man's daughter was on the team. The man asked Snider to sign something and when Duke asked what he wanted signed, the man suggested a volleyball. Duke apparently said it was the only volleyball that he ever signed. Rod later confirmed the info with Duke's daughter through Facebook.

Rod said he's had the volleyball for quite awhile, but thought a huge Dodger fan should own it.

Well, I fit that description.

This ball will eventually cause me to revamp my upstairs collectibles area so I can have proper shelving for stuff like this. Right now it's two shelves packed with signed photos and figurines.

But that doesn't mean I'm not still all about the cards.

steelehere said…
One of the more interesting things about Duke Snider to me is that he was Straight Outta Compton having attended and played his high school baseball at Compton (California) High School.
April 25, 2016 at 8:32 PM

Nachos Grande said…
That's pretty cool! You don't see a signed volleyball every day. Maybe a sequal for a Tom Hanks movie is in the works?
April 25, 2016 at 9:19 PM

Angus said…
I have many fond memories of listening to Duke Snider with Dave Van Horne on Expos radio broadcasts when I was a kid. Great autographed ball!
April 25, 2016 at 9:35 PM

The Lost Collector said…
That's pretty cool! I can hear Tom Hanks yelling "Snniiiiiiiiiiderrrrr" instead of "Willssssoooon!"
April 25, 2016 at 10:00 PM

Stealing Home said…
I'll see if I can find a Koufax autographed grapefruit for you.
What a great gift. I would treasure that one forever as well.
April 26, 2016 at 3:04 AM

Stealing Home said…
Almost forgot to mention...teenaged me remembers Dodger Rex Hudson as well. I didn't remember the details of his cuppacoffee, but I sure remember he was a big name at the time.
April 26, 2016 at 3:06 AM

BobWalkthePlank said…
That is unique. Seems like something that would pop up on Antiques Roadshow or something of the like.
April 26, 2016 at 8:07 AM