April 08, 2016
(Today is "Draw a Picture of a Bird Day." I hope everyone knows what kind of bird they should be drawing. My scrawled-on-a-post-it-note-in-10-minutes contribution is below. But first, Cardboard Appreciation. This is the 238th in a series): 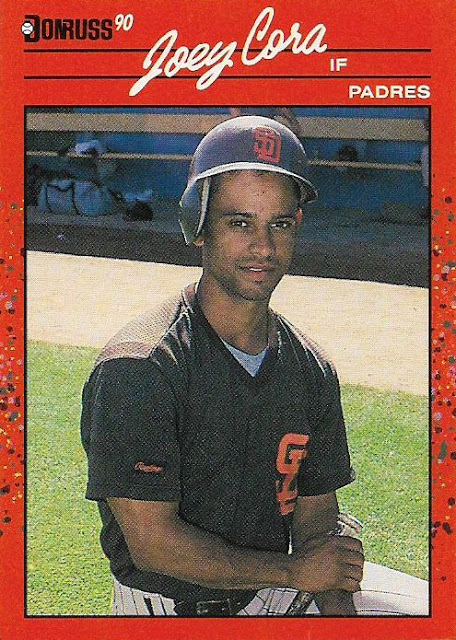 To me, 1990 Donruss is one of the most boring card sets that has ever been made. You can enthuse over the abundant error cards or the Aqueous test cards for a lifetime, but with the exception of the Bart Giamatti card, all I'll ever see is one boring photo after another enclosed in that same oppressive red frame.

So, with the very little time I have today, I made it my mission to find one interesting thing to write about from the 1990 Donruss set.

I shuffled through the 1990 Donruss cards that I own -- they are in order by team, but I care so little for the set that I noticed cards just dropped in there indiscriminately, a stray Pirate amid the Indians, for example -- and became more desperate as I came almost to the end without even a hint of anything interesting.

At the Padres, I stopped on Joey Cora. I noticed his helmet wobbling on his head, as if it's two sizes too large. I remembered a co-worker recently calling Cora "the Great Gazoo," which apparently was a common reference to Cora's helmet while playing. "Well, that might be something," I thought.

I turned the card over in hopes that the back mentioned something about Cora getting beaned and wearing oversized helmets because of it (we writers are not the nicest people sometimes). 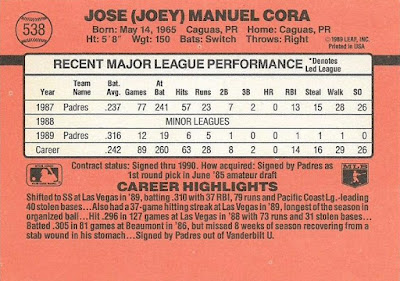 I started scanning from the top:

After doing a brief bit of checking around, I realized this information is likely common knowledge to Padres fans (as well as fans of the other teams with which Cora is associated -- the Mariners and White Sox). But I had never heard it. And the blurb just drops you off in the middle of nowhere. Stabbed in the stomach???? How? Why? Was Beaumont the toughest locker room in history? Am I the only one curious, Donruss?

I found out that Cora missed a good chunk of the season after he was stabbed by a bunch of guys looking for a fight. Cora was playing for the Padres' Double A team at the time, and they were playing the Dodgers' Double A team in San Antonio. The game was over, Beaumont had lost, and some of the Beaumont players were waiting outside of the stadium for the team bus (why the team bus wasn't already there is something that was brought up). Some loudmouths went by and shouted some stuff at the players, which also included Sandy Alomar Jr. Cora answered back, and after a little shouting, the loudmouths left ... and came back with some more loudmouths. They tried to engage Cora again, and he answered back. Then they attacked him and stabbed him in the stomach and arm. Depending on which account you read, if Cora had been stabbed just a little bit higher or lower, he'd be dead.

Cora decided from that point on that he was done getting into fights. He was in the majors the very next year and enjoyed a productive 11-year career.

Cora went into coaching after his career and was the interim manager for the Marlins after Ozzie Guillen was suspended for his remarks on Fidel Castro. Cora is now back in Double A, as the manager of the Altoona Curve. I just viewed his Opening Day press conference, which happened just three days ago. He kept talking about developing "not major league players, but major league men." I don't fully know what "major league men" are, but I'm guessing Cora believes they're guys who don't get into fights after the game.

But, of course, the biggest lesson in all of this is the lesson I've preached over and over on this blog:

Even in 1990 Donruss, there's something to learn.

Now, everyone, please remember to draw a picture of a bird before the day is done. 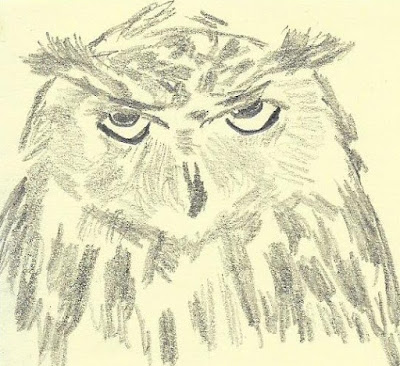 I guess it's a self-portrait.

Tony Burbs said…
Well, that was a new story to me. As a resident of the Southside of Chicago, surrounded by White Sox fans, I'd have thought I'd heard that one before. Yikes.

G J Brewer said…
Glad you shared. I hadn't heard the story before but definitely remember that little guy and his 90 Donruss card. Crappy card. Nice sketch.
April 11, 2016 at 11:35 PM