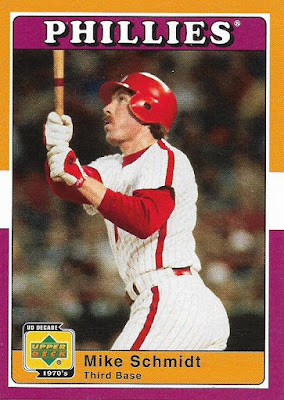 I have lots of priority completion tasks when it comes to this hobby, sets that are right at the top of favorites I want to finish. But I don't do a heck of a lot about them sometimes.

I need you people to help me.

The Mike Schmidt night card here is part of a great selection of cards from the set from The Chronicles of Fuji. Thanks to supertrader Fuji, I'm back on track to completing the set. After receiving 32 cards toward the set, I need just 16 more base cards, and 13 insert cards.

As I've mentioned several times, I like the set not only because it features star players from when I was a kid, but also because it blatantly borrows its look from my all-time favorite set, 1975 Topps.

But I've already done it for you with these cards from Fuji. Here are the combinations: 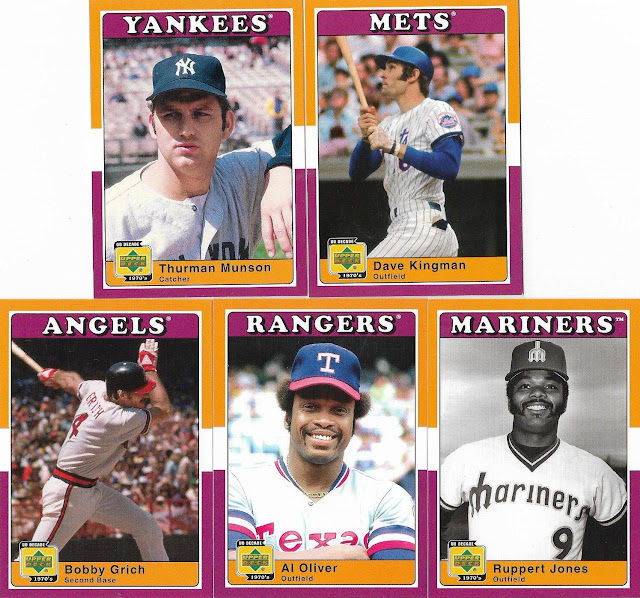 These five, along with the Schmidt card, show off what I consider "the base combination" of the set. The orange-purple combination also makes up the back of every individual player card in the set, regardless of the border combination on the front. 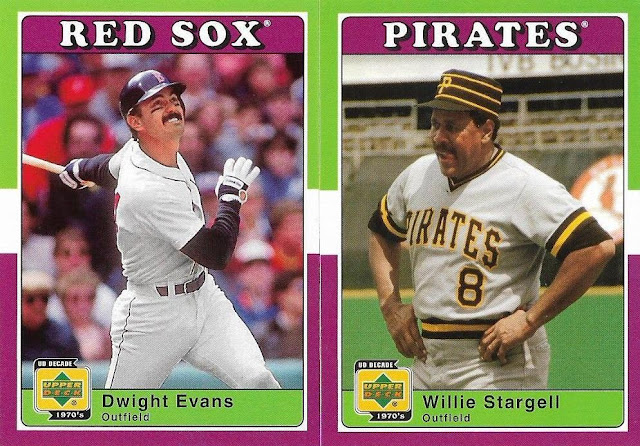 Just two cards in Fuji's selections of this combo. Willie Stargell is looking at Dwight Evans like he's a hamburger.

There is also a green-purple combo in the 1975 Topps set. I called it the "Incredible Hulk" combination back on the 1975 Topps blog. You can see how over-the-line Upper Deck was with copying Topps' designs here, but it at least copying the look got UD to produce a set I would actually buy. 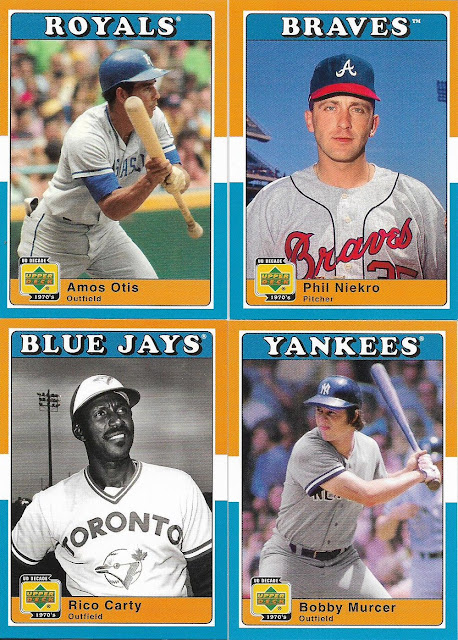 I think these are good-looking cards ('75 Topps features a blue-orange combo, which is also one of my favorites). I particularly like the Amos Otis card. Oddly, I don't like the '81 Topps Royals orange-bordered card for a reason that we'd have to go to the psychiatrist to figure out.

I like this combination, too. It's an improvement on '75 Topps' blue-green combo, which doesn't work for me because of the pale blue color. 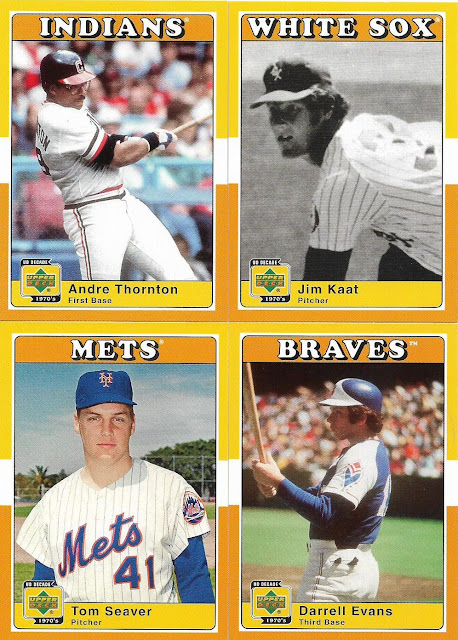 Probably the most '70s looking border colors in the entire set. These borders are two-thirds of the kitchen in my house when I was a kid. Again, UD turns a '75 Topps border combo on its head. 1975 Topps featured orange on top and yellow on the bottom.

Another twist on a '75 Topps combo, which was green-yellow. Two outstanding cards here in the Eckersley and Santo. 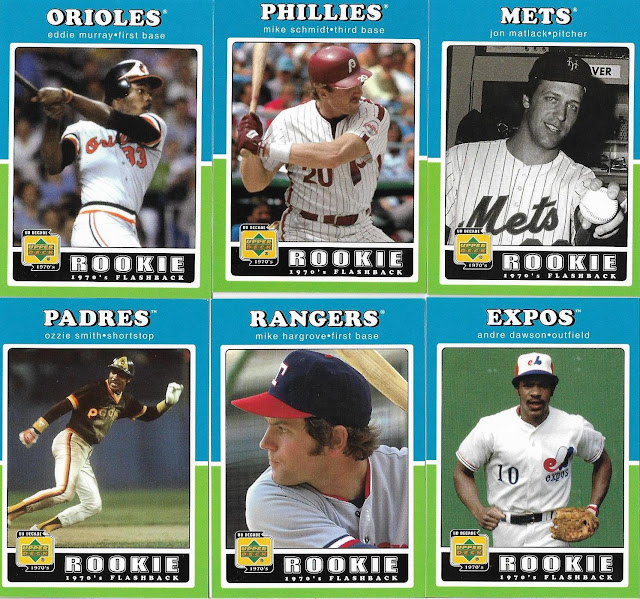 We're into subset territory. This is the only one of the subsets from Fuji that is two-tone. You can see two other night cards here in Eddie Murray and Ozzie Smith.

Probably my favorite subsets in the whole set. 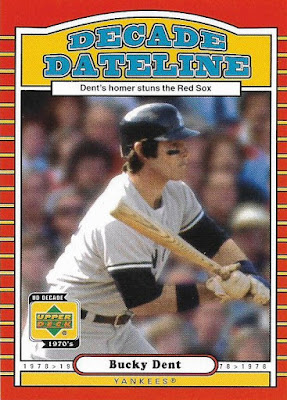 
Also, Fuji padded the package with a few random Dodgers: 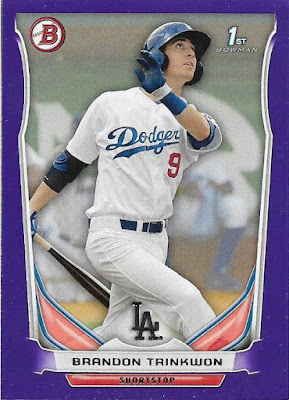 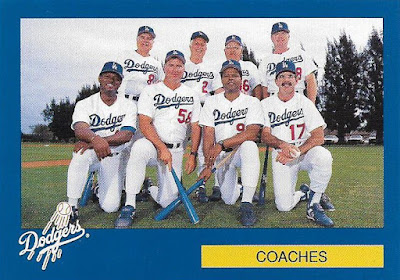 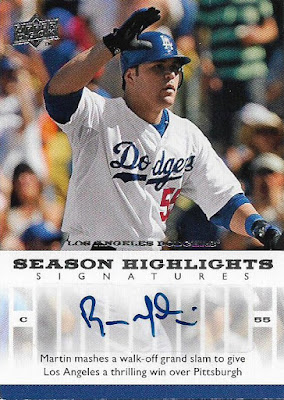 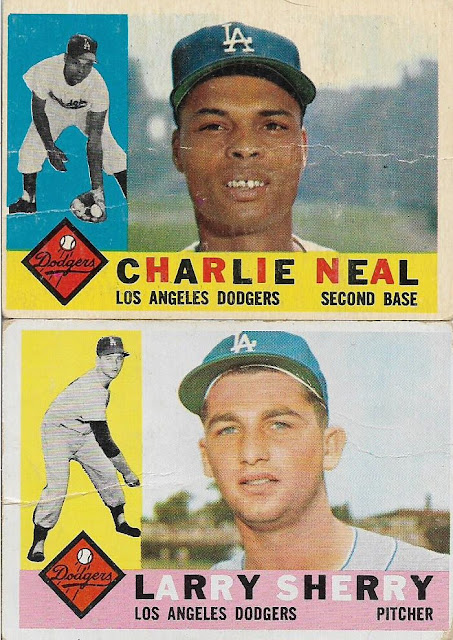 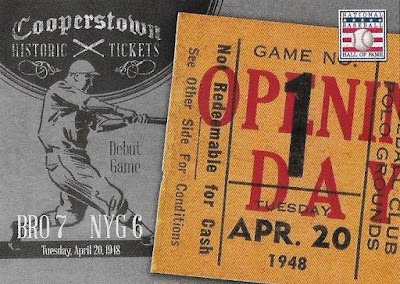 That's a wide swath of quality there. You might be surprised that out of that selection, I get a kick out of the Panini Cooperstown Opening Day card most, which commemorates the Dodgers' win over the Giants in Roy Campanella's debut.

And the fitting final card: 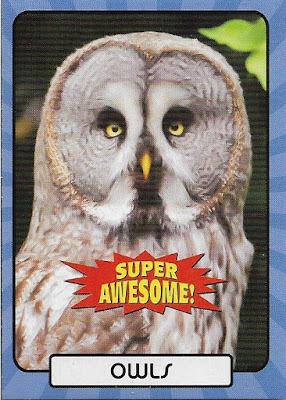 Of course they are.

But if you need reasons: 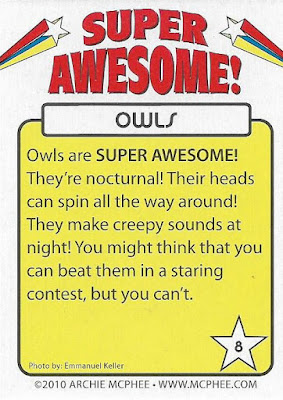 AdamE said…
I think the most 70s looking thing in your post (besides the original 75 card) is the back of the owl card. I know I've seen those colorful shooting stars somewhere before. I can't decide if it's from Saturday morning cartoons or ads inside comic books.
April 16, 2016 at 9:50 PM