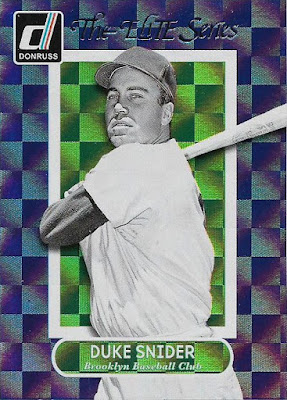 I had to do a little bit of research for this post, only because I am so clueless about cards that others of a certain age treat with such reverence.

I recently received a supertrader package from P-town Tom of Waiting 'til Next Year. The package was filled with super variety, everything from oddballs to junk wax to shiny stuff to a couple of autographs. But when I trimmed it down to the cards I needed, a lot of what was left were cards I am not familiar with at all.

Included in that were several Panini Donruss cards and the brand's tributes to the exclusive cards that Donruss made back in the '90s, when I wasn't collecting.

The above card is Panini's recognition of the 1992 Donruss Elite Series (again, I'm not an expert on this '90s stuff, so if I mess something up, let me kn ... oh, who am I kidding? You'll let me know). You can see how shiny and refractory it is with squares going off everywhere.

Looking up a few Donruss Elite Series cards from back then, I was able to confirm that the player featured on the cards in '92 was not in black-and-white. This is the flaw in this card (there's always a flaw with Panini). These cards need color! 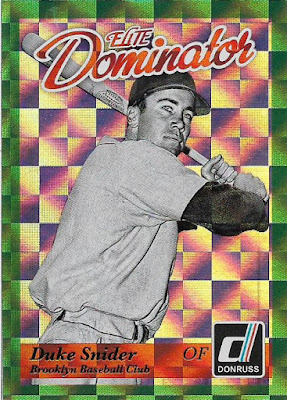 More Duke, more black and white. But how can I complain when I'm so delightfully dazzled?

This is also from 2014 Panini Donruss and it's a take on the 1993 Donruss Elite Dominator cards, which I have to admit are nice-looking cards. The '93 cards have pretty color pictures and a more pleasant kind of green for the border. But considering how much those '93 cards go for (particularly the Piazza that I still need), this is a good substitute. 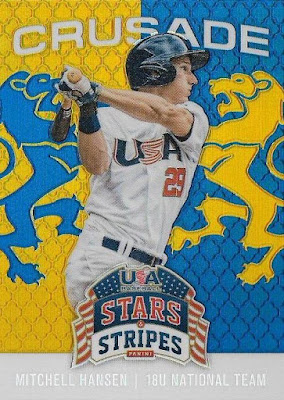 Now we're moving onto another tribute to a '90s Donruss exclusive, the Crusade cards, specifically from 1998.

It took years for me to actually appreciate what Crusade was all about, but now I know these are fantastic-looking cards. I have maybe one in my collection, and I should have more.

This card is from the 2015 Panini USA set. You're probably asking yourself who the hell Mitchell Hansen is. So was I, because I make it a rule not to pay attention to baseball players under the age of 18.

But Hansen was a Dodgers draft pick last year, supposedly a top 40 prospect, and played rookie league ball for L.A. last summer. I'm pleased to say he is now 19, which means I should probably at least acknowledge his existence. 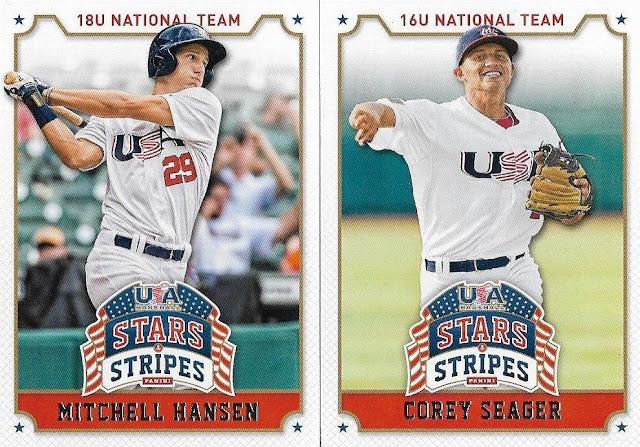 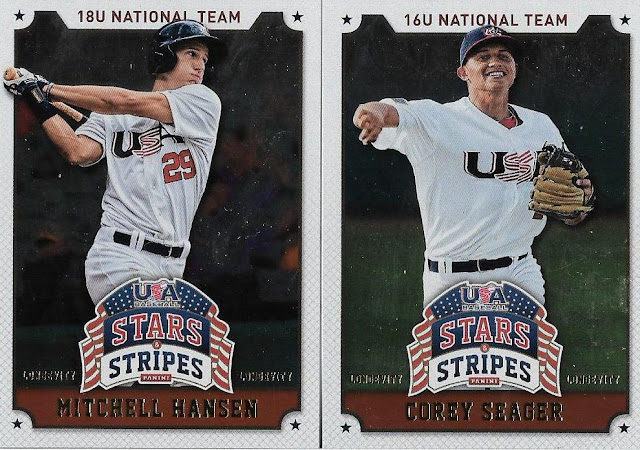 And here are the mirror parallels, or whatever the hell they're calling them. I have around 20 separate Seager cards already, which is very weird for someone who is as old as me. 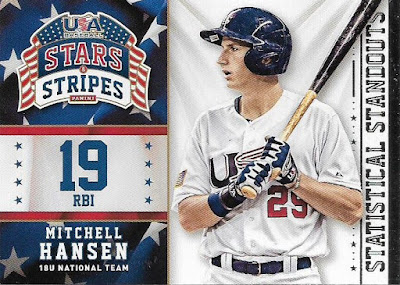 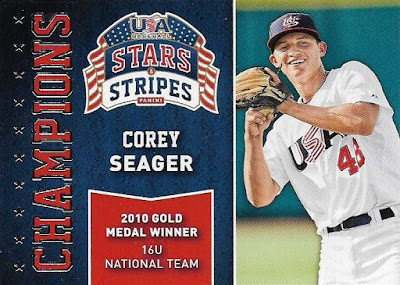 This Hansen kid better do something or he's booted from the binder.

Tom apparently is big on prospects and unlicensed cards, because I added a lot of both to my collection here. 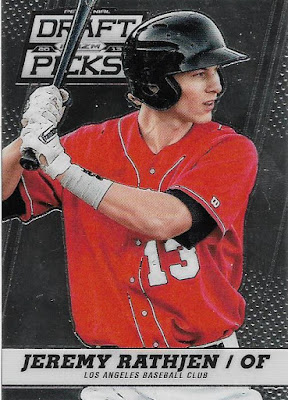 Here's the last Panini prospect card I'm showing on this post. This one in particular finally forced me to look up who Jeremy Rathjen is. Turns out he's trying to get above .200 in high A/double A. OK, let's get back to guys I know. 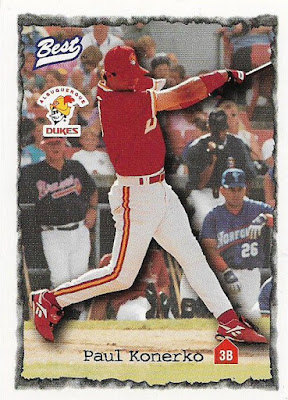 Another prospect/minor league set, this time from the '90s. Someone should have shipped this card to the Dodgers before they traded Konerko. Look at that swing. Who would trade anyone with that swing? 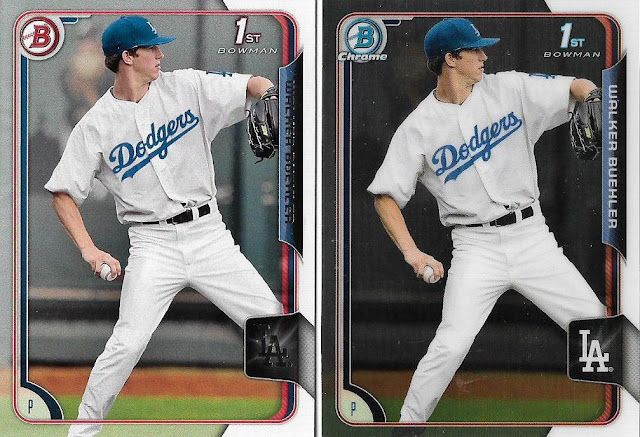 And now the card brand that makes its money off of prospects. Here are a couple Bowman cards from last year of Dodgers' top pick Walker Buehler. His arm is working a lot better here than it is now. 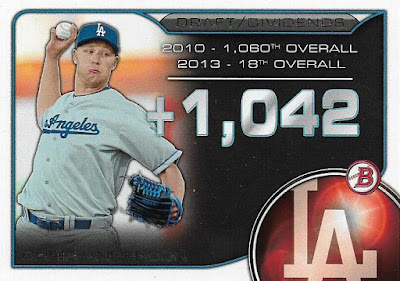 Dodgers' 2013 first-round pick Chris Anderson is in Double A now. This insert set focuses on players who were drafted twice and drafted higher the second time. Anderson was drafted the first time by the Cubs. 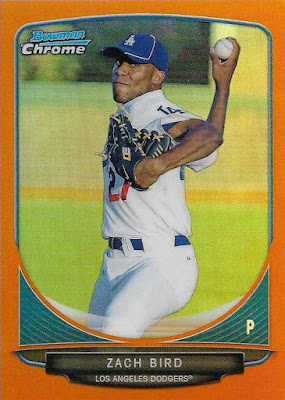 Orangey Zach Bird is now with the Braves, as he was exchanged in the 3-way deal with the Marlins last year. Bird is now in Class A for Atlanta, but this card is numbered 23/25, so weeeeeeeeee! 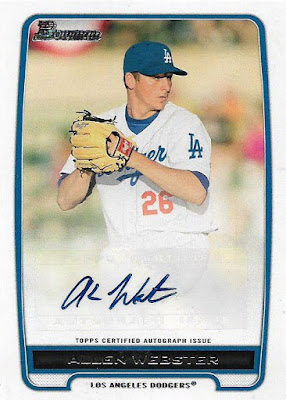 Auto alert! I know that looks like this is "Al Wat," but it's actually Allen Webster. I now own a dozen cards of Webster and two different autographs. Meanwhile he got knocked around in the majors in his brief stints for the Red Sox and Diamondbacks and is now pitching in the Korean League. 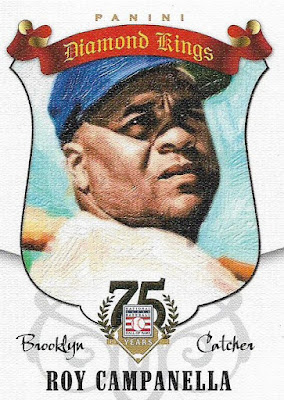 Sick of prospects who didn't make it? OK, here's a 2014 Panini Diamond King card of Campy. I'd make some sort of crack about how Campy is searching for the rest of his head, but, come on, it's Campy. 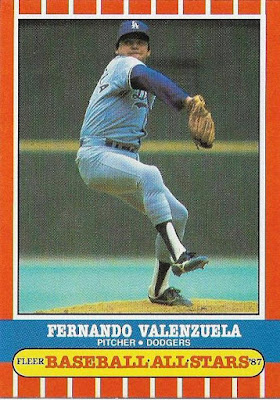 There were several Fleer Box Set cards from several different editions. I love these cards. I've got most of the Dodgers already, but these were in pristine shape and good for a few upgrades.

And there's one that had escaped my clutches all this time. 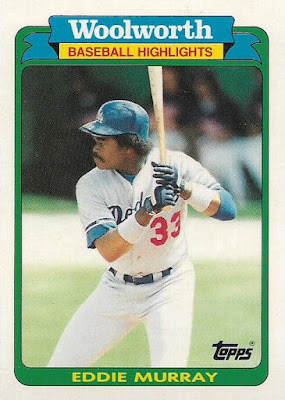 Now that Eddie Murray Woolworth is rounded up, it's time to land that elusive 1990 Kmart Batting Leaders Murray card.

Tom sent a few other cards that I think I'll save for another post. Mostly because I've got to do more research on those.

My brain is worn out from research right now.

But it's a good kind of worn out.

Tony Burbs said…
Apparently all the Seager cards can be found in Illinois this year - seeing as both Tom and I seem to be pulling lots of them.
April 19, 2016 at 9:42 PM

Anonymous said…
The Konerko card has a Richmond Brave and a Norfolk Tide in the background, both were International League teams. Looks like the photo might be from the AAA All-Star Game, or maybe the corresponding home run derby (if they had one at the time).
April 19, 2016 at 11:00 PM

P-town Tom said…
"Tom apparently is big on prospects and unlicensed cards..."
Something of that ilk will probably wind up on my headstone. Glad I could fill some gaps in your collection.
April 20, 2016 at 7:10 AM