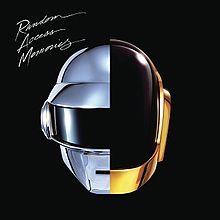 I can't say I'm a follower of electronic music. I'm more of a rock n' roll guy, who gravitated toward new wave (which actually isn't that far from electronic music) and alternative in the '80s and is now back to reliving the rock of his younger days.

In fact, I like just about all of the music of my younger days -- from easy listenin' '70s pop to 25-minute stadium rock anthems to "we got the funk" disco jive. I think some of the dance songs from that time are fantastic (don't you ever say a bad word about the long version of Taste Of Honey's "Boogie Oogie Oogie").

And that's why I've suddenly become a big fan of "Random Access Memories" by Daft Punk.

There are millions of people who can tell you more about the two French dudes who make up one of the most popular acts of all-time in the electronic scene. But what I like about this album, far above the group's elaborate stage shows or promotional roll-outs or robotic themes, is its tribute to the music scene of the late '70s/early '80s.

That's my era right there. And to see two modern-day guys pay homage to a period that has been ridiculed infinitely is fantastic. Daft Punk may be dance music of the day, but it's also funk music from 1976. As evidence of that, the group employed musicians like Nile Rodgers and Paul Williams to work on the album.

In interviews, they have said this LP is a tribute to things like: disco legend Giorgio Moroder, the Doobie Brothers, ELO precursor The Move, Fleetwood Mac's Rumors album, Michael Jackson, Steely Dan and Dark Side Of The Moon by Pink Floyd. And they purposely employed less sampling, etc., to pay homage to that time period.

The LP also has two staples of that era of music -- super-long songs (there are a couple of 8- and 9-minute songs on the album) -- and a concept. Concept albums were a necessity for bands that came out of the '60s and '70s. I miss them. But Daft Punk has brought it back with RAM.

But that's about as much as I want to babble about that (and there are a zillon sites that will talk for much longer about this LP if you're into that kind of thing), so let's get to the exercise at hand. I'm going to find a card that fits the song title of each song on Random Access Memories.

As usual, this wasn't easy. Songs about love and music and computers and space are hard to translate into baseball cards. But I think I did OK. 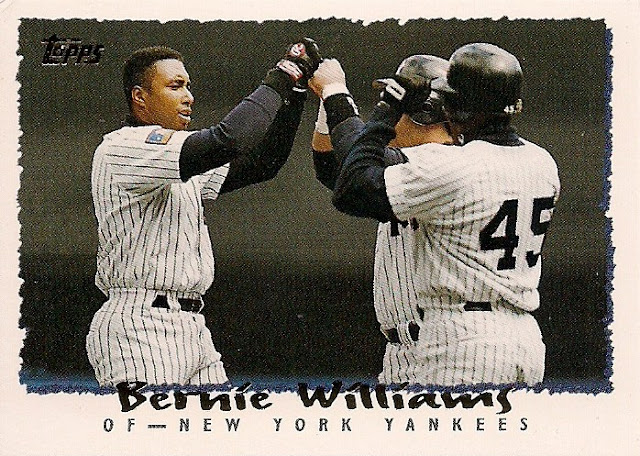 Track 1: Give Life Back To Music. This is one of the Nile Rodgers songs and if you can't hear "Good Times" by Chic on it, then you weren't born back then.

After thinking a little bit, I remembered Bernie Williams and his interest in playing the guitar, which is what he does now that his baseball career is done. He's given his life to music.

When Williams was playing baseball, everyone everywhere mentioned that he played guitar. It got annoying. "HEY, did you know Bernie Williams plays guitar really well?" It was like ballplayers can't walk and chew gum at the same time.

I could have found one of those cards where Williams actually has a guitar, but that would mean collecting Yankees cards. And I refuse to do that. 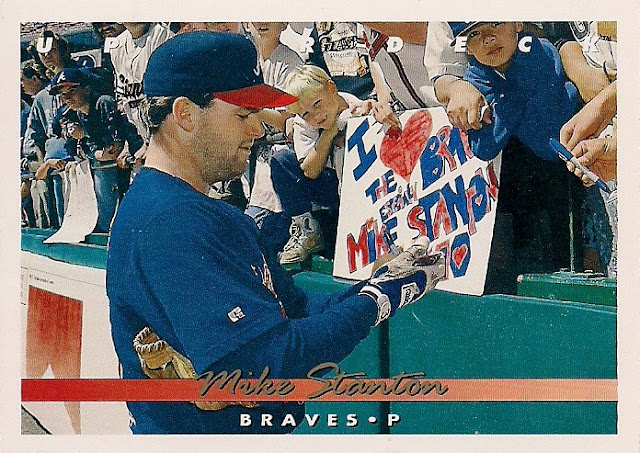 Track 2: The Game Of Love. OK. What card is going to reflect THAT? Then that heart poster popped in my head. Some Braves fans really liked Mike Stanton in 1992. Wonder who they love now?

I admit the vocoder voices on some of the songs take a couple of listenings. But I've read that they wanted to show that a robotic voice could express emotion and it does work. 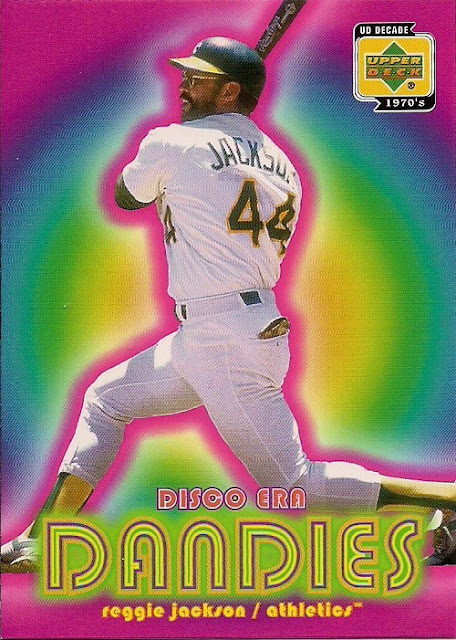 Track 3: Giorgio by Moroder. A song that pays tribute to synthesizer king and the man behind Donna Summer's I Feel Love, including Giorgio Moroder himself speaking about his life. So I think a card from the marvelous 2001 Upper Deck '70s Disco Era Dandies insert set is fitting. I'll bet Reggie made a trip to Studio 54. 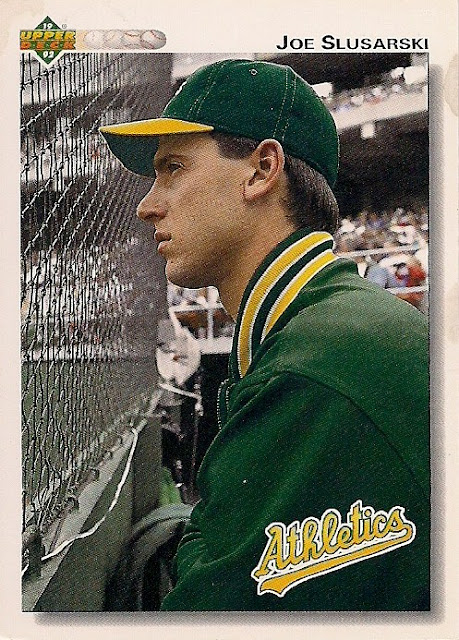 Track 4: Within. I didn't have a lot of time to find the perfect reflective card. But I wanted a pitcher, because he's the most introspective guy on the team. This works (despite the card stains, which I discovered when I scanned it -- stupid repacks!) 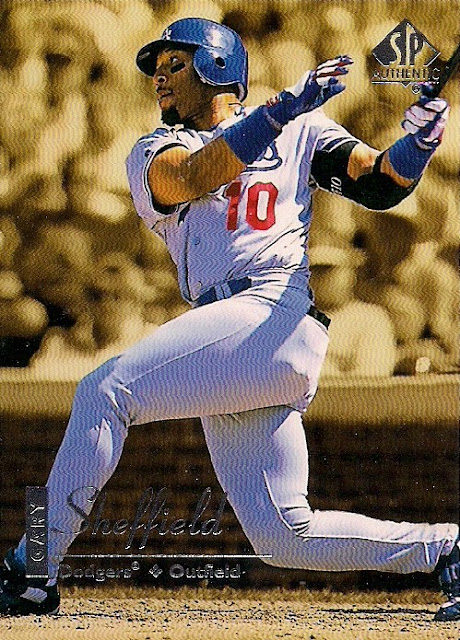 Track 5: Instant Crush. My favorite song on the album. It's a Strokes-tinged robotic rock song that features Julian Casablancas. Sheffield's bat swing was the most vicious I've ever seen. If anyone could instantly crush a ball, it was him. 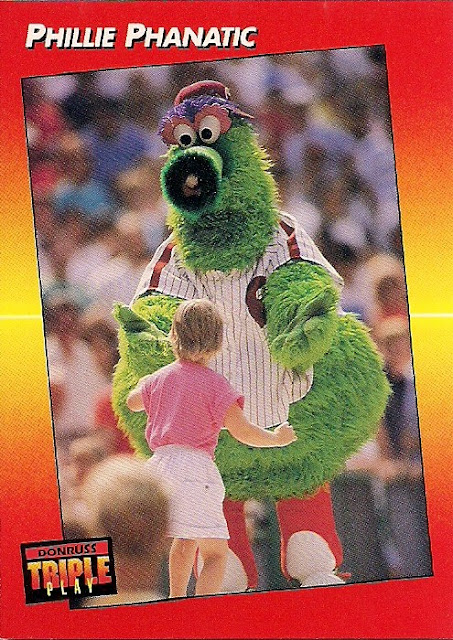 Track 6: Lose Yourself To Dance. The most difficult card to find. How are you gonna find a card of a player dancing? I definitely didn't want to rely on that horrible clinch of the double play turn as the ballet of baseball. Ugh. Fortunately, I didn't have to because the Phillie Phanatic. Perfect.

Oh, and this is phenomenal. And pretty much sums up the album. 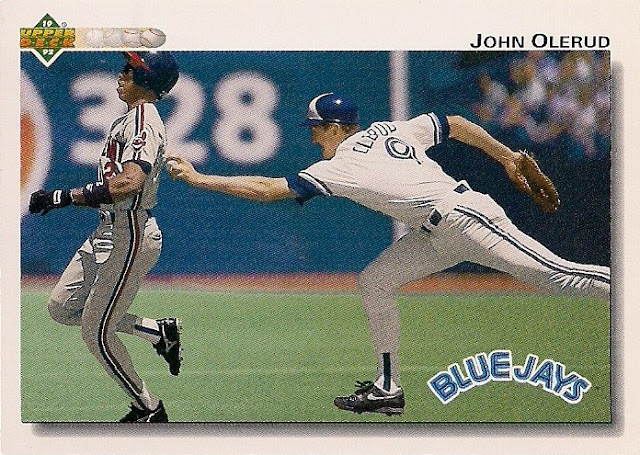 Track 7: Touch. Easy one. This song is sung by Paul Williams, who was everywhere in the '70s. His "Phantom Of The Paradise" freaked me out as a kid, and you can hear that movie in this song, along with Dixieland and a hundred different other genres. 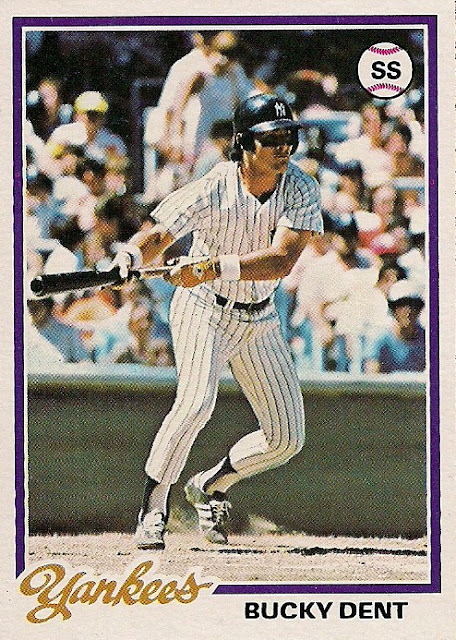 Track 8: Get Lucky. All you gotta do is say "like the legend of the Phoenix" and this song is my head for three days.

If I may editorialize for a moment (like I need permission), Bucky Dent was the luckiest son of a gun of the entire 1970s. 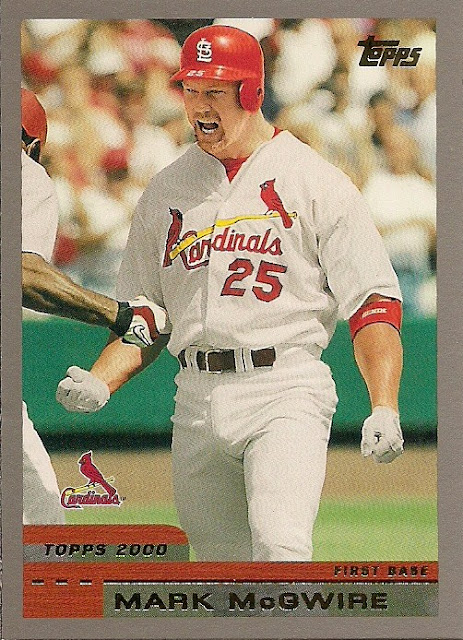 Track 9: Beyond. Baseball amazes me with its excellent performances almost on a daily basis. There was only one time when I thought I wasn't prepared for the level of excellence that it was producing. That was during the HR battle between Mark McGwire and Sammy Sosa. As amazing as it was at the time and as caught up as fans were in it, there was a part of me that just couldn't process it and was a little uneasy about the whole thing.

That's not to say I predicted steroid use. It's just how I felt at the time. That this was "beyond" what I was ready for. 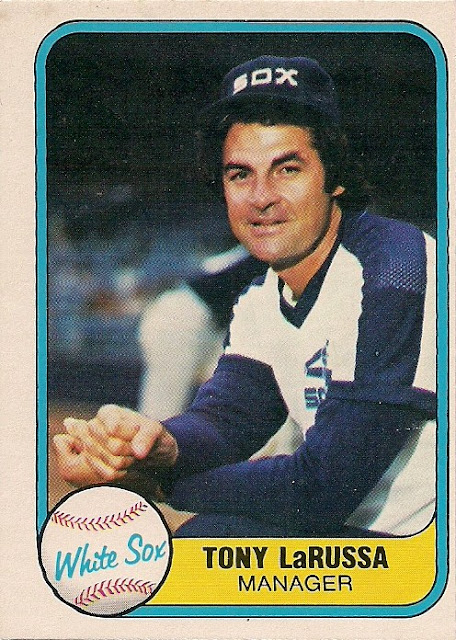 Track 10: Motherboard. Even I know that the motherboard makes all the components of a computer work together. A good manager is supposed to do that. And LaRussa was known for his reliance on computers. I thought an off-center card of LaRussa in his early manager days would be much more fun than something from where he carved out his fame. 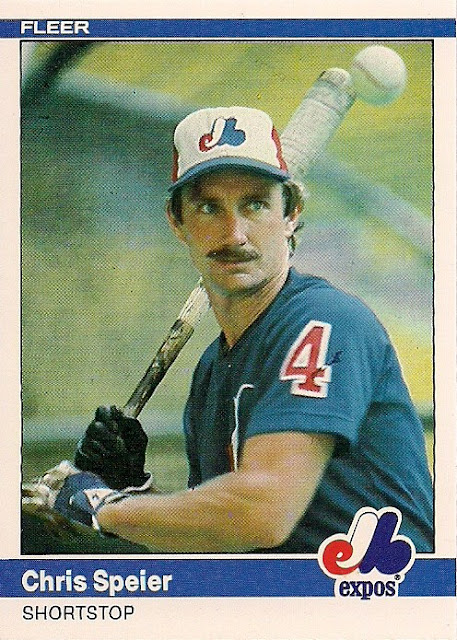 Track 11: Fragments Of Time. Much as present-day Topps wants you to believe with its cards of players striving and straining and expressing, that baseball is all action all the time, it's not. Baseball is filled with little snippets of time of players standing, waiting, practicing, sleeping, whatever. I like the suspended ball on this card. A fragment of time. 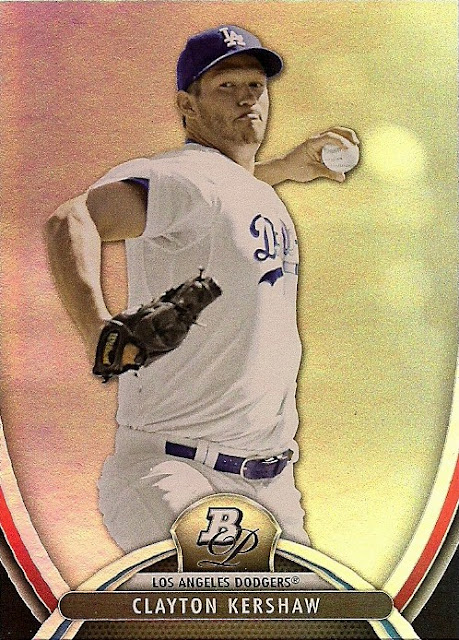 Track 12: Don' It Right. Best pitcher in baseball. Don't be throwin' Felix or Matt Harvey at me. Best. Pitcher. 1.88 ERA. Doin' It Right. Both on and off the field. 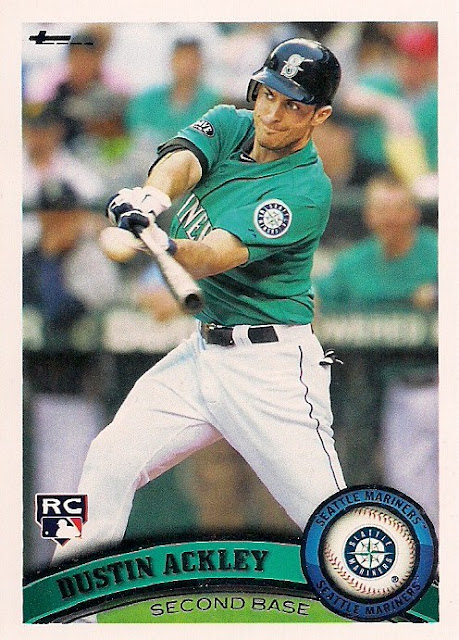 Track 13: Contact. This song is AWESOME. It reminds me of Boston or whatever '70s group you want to mention that liked to employ spaceship imagery (there's only about a hundred).

Unfortunately, this was the best I could do -- Ackley connecting just below a disappearing Topps logo. I wish I had more time.

But then this LP is over 74 minutes long.

And this is where the needle comes off the record.

For you old-timers (and remember, I'm in my late 40s), this may not be for you, but I think it's about as good of an album that anyone is putting out these days. The fact that Daft Punk thinks the music of the '70s and '80s was a time of infinite creativity is enough for me to appreciate it.

But don't worry. The next LP will be from the '90s or '80s. Maybe even something your wallflower speed.

Drew said…
Such a cool post! I love the connection between Daft Punk and baseball! Random Access Memories has been my favorite release this year by a longshot, such a nice piece of work.
August 14, 2013 at 9:31 PM

Commishbob said…
I'm an old timer that happens to be a big fan of electronic music in general and Daft Punk in particular. I love this album, almost as much as the Tron Legacy soundtrack they did. Here is a fun site for exploring the genre.
August 14, 2013 at 10:41 PM