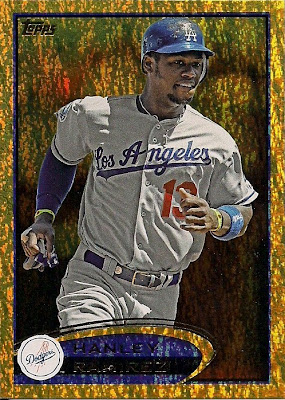 I'm not the most positive person. I suppose a slight negative bent is a common character trait for a writer. Inward thinking tends to highlight the pitfalls and road blocks along the way. That's why you hear a lot more about writers drinking themselves to death rather than meeting their demise when the rip cord fails on their parachute.

This mind-set trickles into the hobby a lot and you've heard me whining in the past about how I don't have a decent card shop, how card shows are few and far between, how new product doesn't hit here first the way it seems to in certain other spots. I can't help but feel a tinge of jealousy when someone misses a card show because, hell, there's another one next month.

But although I'll never be what you would call "perky," I'm not morose either. And I work very hard on seeing the positive side of things. Infrequent card shows create greater appreciation. Lack of a card shop helps me find better deals online. Stuff like that.

Really, I'm pretty fortunate in this hobby. And most of it comes from the fact that the number of people who send me cards compensates quite nicely for living in the middle of nowhere.

I might not get to card shows too often, but other people who send me cards do. And those other people also go to other exotic places, too ... 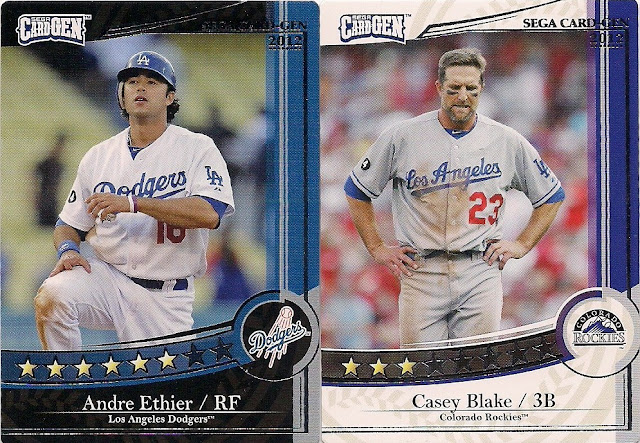 I received these cards from Kenny, aka Zippy Zappy, who I know used to live there. I've seen these cards -- which are connected to a video arcade game, sorry I don't know more -- on other blogs. And I instantly wanted some for myself, not having any idea how to acquire them.

I don't know why one has a black border and one has a white one. Maybe it doesn't matter. But you can see how sad Casey Blake is that he's become a Rockie. 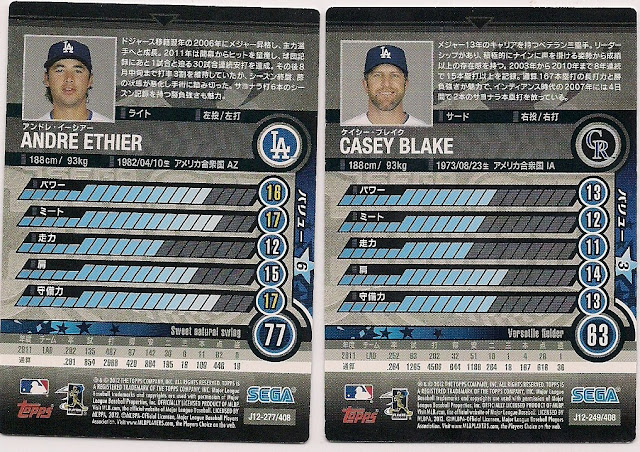 Those are the very video-gamey and very Japanese card backs. I'd interpret it for you, but I'm lazy and I'm going to let Kenny do it for me. Here is what each says:

"Made his MLB in 2005, the year after he was traded to the Dodgers, and emerged as a power hitter. From 2011's opening day onwards, he collected hits on a daily basis and came one game away from beating the franchise record for most consecutive games played with a hit with 30 games. After that he maintained a batting average over .300 until mid-August but fell to injuries near the season's end. A fierce competitor who has 6 walk-off hits to his name."

"A veteran third baseman with 13 years (as of 2012) of experience. Has great leadership skills and makes his presence known by bringing the best out of his teammates. Between 2003 and 2010 he hit 15-plus home runs for 8 consecutive seasons. He has 167 HRs (as of 2012) and is a fiery competitor who hit 2 walk-off home runs back in 2007 when he was with the Indians."

Very cool that he sent those translations along because actually ... shhhhhh .... I know zero Japanese. 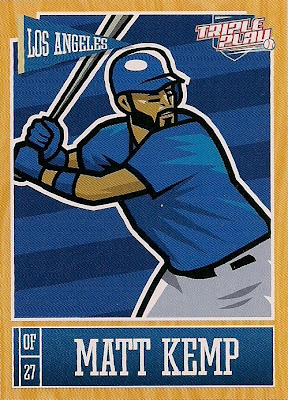 The trade actually came about because of this year's Triple Play. I gladly rid myself of a Derek Jeter for this Matt Kemp. I haven't gone back for anymore Triple Play and don't see myself doing so, so this is how I'll have to get the rest of the Dodgers. 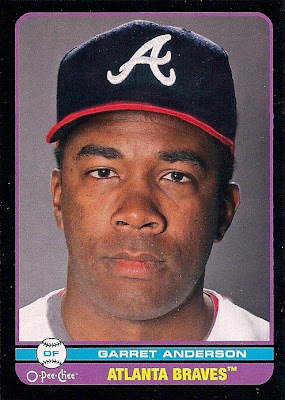 Speaking of stuff I'm collecting although I refuse to devote any time toward it, here is a black-bordered card from 2009 OPC.

It's from Nachos Grande. I am fortunate enough to get cards from people by just leaving a comment that says something like, "hey, I think I'm supposed to be collecting those."

By the way, Garret is displaying the look of every Dodger fan every time he came to the plate for L.A. in 2010. 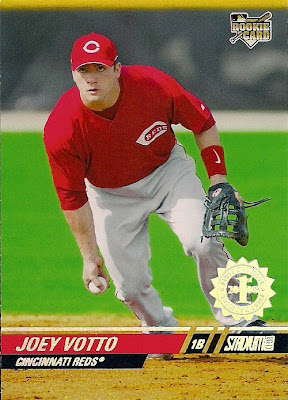 Another set that I'm neglecting.

2008 Topps Stadium Club is almost done, but there are still some of those pesky "divisible-by-three" cards that I'm missing. I've pretty much been ignoring the set because I don't think Topps should be rewarded for its behavior with Stadium Club.But this card that was featured in a post by madding at Cards On Cards peaked my interest.

Once again, I left a comment that said something calm and rational like, "I don't believe I've ever witnessed that particular card before, good sir."

But because I refuse to actually go look at my collection to determine whether my brain is right, and because '08 Stadium Club is the diabolical set that it is, we run into situations like this: 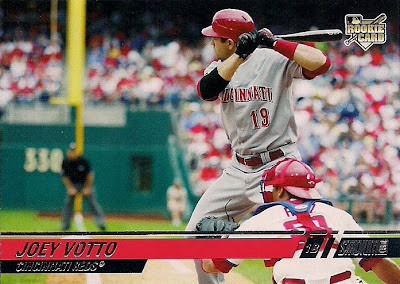 I have a 2008 Stadium Club Joey Votto card already. The one I saw at Cards On Cards is not a divisible-by-three card but one of those rookie two-for cards that are also part of this over-the-top confusing set.

I'm not really collecting those, but, hell, I like Votto, so I'll keep him. And scold my brain. 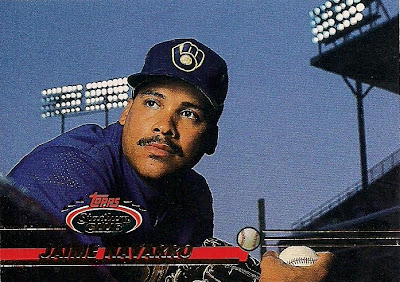 This card is from another guy who seems to find a lot of card shows. Robert from $30 A Week Habit is always good to me, and he grabbed a few cards that covered almost all of my interests.

First we have this very key night card of Jaime Navarro. Absolutely love night cards with lights in the background (perhaps this is a dusk card, but I'm not going to argue it). 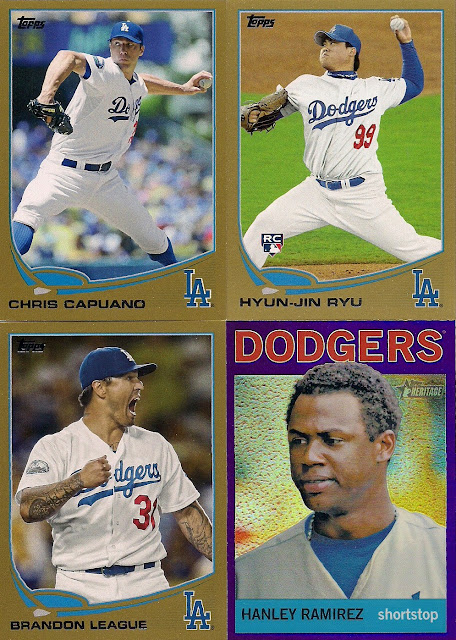 Then Robert sent some current Dodgers in parallel form. Because he knows I sure do love the parallels even as I curse them because that's the negative nelly that I am.

It's very nice of him to do this, considering his Serial Insanity Project. Hope he's got enough Dodgers. 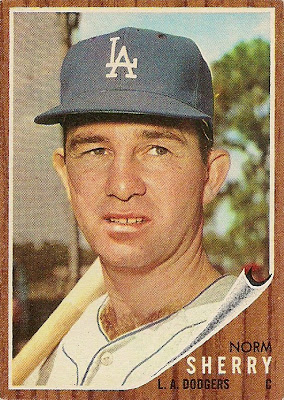 But this is super-nice. A tip-top shape want-list need off the 1962 team set. Norm Sherry -- the man credited for steering Sandy Koufax toward a Hall of Fame career -- has been very elusive for a "common." Quite pleased to cross this off. 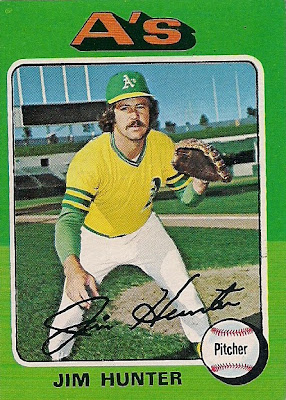 You're not covering all the bases with me if you don't send a '75 mini (trust me, it's a mini). Robert's the man. And Catfish was the man when I was first starting to absorb baseball.

Finally, I'll end this tribute to my fellow collectors with someone who was at the Card Show Of Card Shows.

Matthew from Number 5 Type Collection was among the very fortunate to go to the National a little over a week ago. And he brought home something for me! 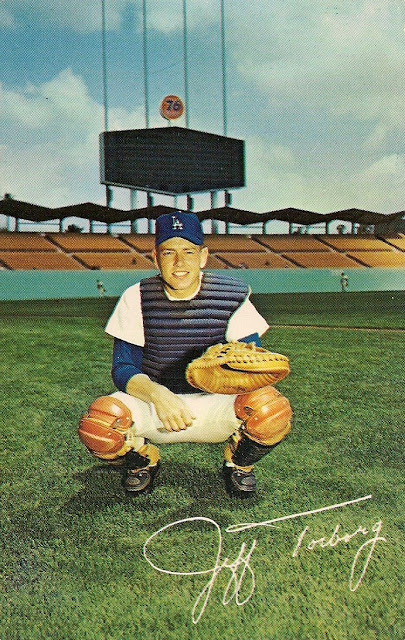 I have a few of these and have featured them before. But I'm finding out there a lot of different ones and I don't have any time to differentiate between which ones were issued when.

I just know that Torborg stopped playing for the Dodgers in 1970, so this is very cool. Old-school catcher equipment, the outfield pavilion at Dodger Stadium, just tremendous. 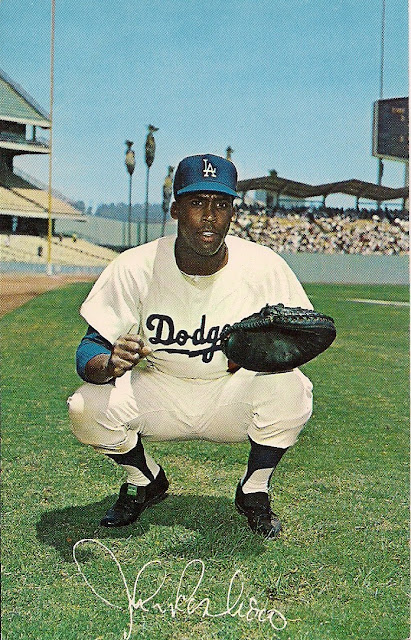 Roseboro stopped playing for the Dodgers after the 1967 season, so I really love this one. Even the back looks delightfully oldish. (Matt pointed out that Roseboro's name is misspelled on the back as "Rosboro").

You can see the outfield stands feature fans. Makes me wish that we could see more of the scoreboard, so I could see the opponent, etc. 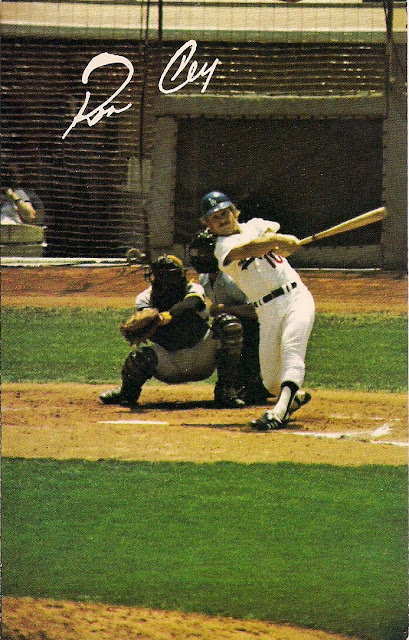 I have a few postcards of my favorite player, but none of them look like this. Cey -- and what looks to be Manny Sanguillen, fantastic!! -- seem very isolated in this shot, but it might be one of my most favorite postcards now.

All of the above is quite a haul for someone who isn't close to nearly as many card outlets as a lot of other bloggers.

And that's why I consider myself fortunate.

So remember, if you read about me whining about "I don't have this and I don't have that," just know that I really am grateful and fortunate.

Zippy Zappy said…
Regarding the black border and white border thing, if a player has 5 (or more) stars their card has a black border. Players with less than 5 stars have white borders.
There are some exceptions though but it's too complicated to explain/doesn't involve the Dodgers so I'll leave it at that.
August 11, 2013 at 9:23 PM

Robert said…
The Sherry and the Hunter were two cards I couldn't leave at the show, even if you didn't need them, because they both had a very reasonable price tag. I also wasn't sure what you would think of the Navarro, but I took a chance and sent in anyways...

BaseSetCalling said…
I would have to think that is a very rare Dusk Card. A stadium-lights-still-coming-on card, as the bulbs on the left end are still getting fully lit up, which takes a little while per bulb.
August 12, 2013 at 11:43 AM

Matthew Glidden said…
Glad those postcards arrived safely! Pretty sure that Ros(e)boro is a 1959 or 1960 issue, as the dealer is very knowledgeable about team issues and mentioned those years, even if they aren't dated as such. Torborg would've followed soon after. (I liked the varied catcher's equipment visible in all three. :-)
August 19, 2013 at 1:25 PM