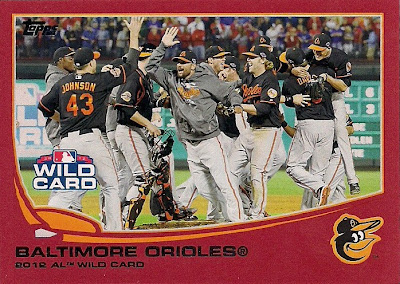 There's a lot of talk in sports about "peaking at the right time," being able to put all the elements together -- or finding that key element -- to save a team's season or win it a championship. You know, kind of like what the Dodgers are doing right now.

But this can apply in lot of other areas in life. A well-timed comment, last-ditch effort, sudden discovery can change the outcome for the better and sometimes forever.

As you know, I hadn't planned to collect much of 2013 Topps, or any current set, because of various tinkerings that made me turn more and more toward older sets. But then Topps went and did something to make me buy much more than I intended.

It came up with the best base parallel I have ever seen.

I've always been partial to color parallels. The best ones for me are the cards in which the entire background is paralleled. Think '08 Baseball Heroes (the parallel meter will fill you in on where I stand). Colored-border parallels are cool, too. But border parallels depend on the design. How much of a border is there and what kind of border is it?

Some consider 2013 Topps to have too much border. I disagree. More border, combined with the different color border, makes the parallels simply stellar. Perhaps that was the plan. But I like the 2013 base color parallels better than any base color border parallel that I've ever seen. I particularly like the Target red ones.

This Orioles wild card parallel is the perfect example. I love it. I'm sorry, Orioles fans, I'm not giving it up. There is even something about this card that evokes some sort of childhood memory of being inside a cozy, cabin-like restaurant. Yeah, I know it's crazy. But Topps really struck a nerve with me with this thing.

If I had more money, there's no doubt I'd be chasing at least the red parallel set, and probably more. But instead, I buy a pack of 2013 Topps here and there, whenever I have a little extra cash, with the hope of getting one of those parallels.

Just as Topps planned all along.

This kind of parallel came along at the right time, just when I was considering keeping my pack buying down to a couple a year.

Will I do the same next year? I doubt it. I've seen the design and I'm not impressed.

A lot of it comes down to taste, I realize.

I wasn't always enamored with parallels. 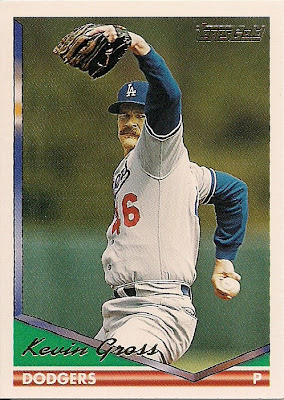 I remember these cards well. I was still collecting in the early '90s.

I particularly remember the 1992 Topps gold-stamped base cards. 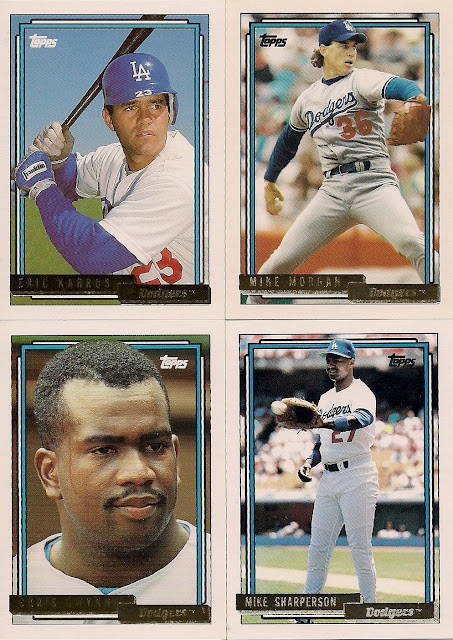 I know collectors went crazy for these and there are some present-day collectors who get nostalgic about them.

But I am not afraid to say that these did not impress me in 1992.

I was interested when one came out of a pack. I probably raised an eyebrow and thought "that's different." But it didn't seem special, something with extra value, or earn a special place in the binder or shoe box. 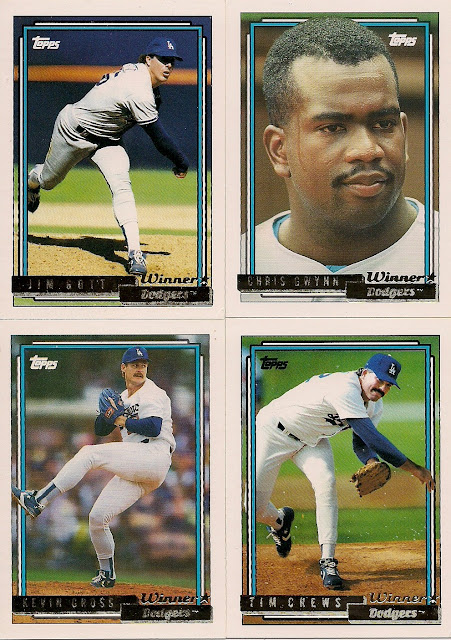 I'm pretty sure I knew about the "winner" versions of the cards, too. But whatever you had to do to obtain them, I never did.

It didn't draw my attention. 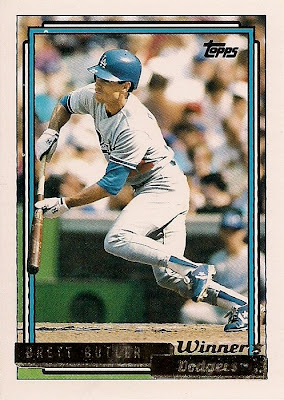 Part of this is probably because I was still so attached to the collecting habits created for me in the mid-1970s. Collect the base set, 1-660 or 726 or 792, and you're done. Everything else is distracting you from your goal.

I still like that philosophy. It's a philosophy that I'm trying to get back to -- fully and completely.

But because I've become a little bit addicted to color parallels, and because these 2013 Topps version are so IN LINE with what I like about them, I'm afraid that for now, purchasing parallels is here to stay.

Does that mean that Topps has found the key element to keep me buying its cards? Was this the last-ditch effort that won me for good?

After all, we all know how difficult it is to put together back-to-back championship seasons.

Night Card Binder candidate: Baltimore Orioles AL Wild Card, 2013 Topps, #317
Does it make the binder?: No. This double-sided night card has it beat. But that's OK. I know I'm going to want a page of Target red parallels in the binder this year, and this will be a great addition.

petethan said…
Kinda surprised that it's the red border, not the blue, that strikes your fancy, given the Dodgers thing. I get excited about blue-parallel Kershaws, myself.
August 24, 2013 at 8:12 PM

Do you have a list of red parallels that you have or need? Don't have any Series 2 but I have quite a few Series 1 I'd be happy to send if you need. Drop me a line at shanediaz82 at yahoo dot com if you're interested.

night owl said…
I don't have a list because I'm not really collecting them. I just like them a lot. But I do need the red parallels of Kenley Jansen, Matt Kemp and Brandon League if you have them.
August 24, 2013 at 8:51 PM