From grand to bland 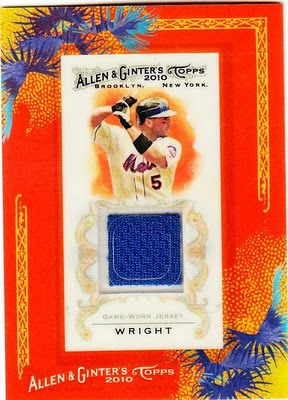 Depending on your perspective, 2013 Allen & Ginter is either here, imminent, dependent on when your bloody Target gets it, or just plain nonexistent.

A&G will never be nonexistent for me. I'll always like it. But I'm coming to terms with the fact that I'm probably not going to complete the set after five straight years of doing just that.

This doesn't mean my heart no longer goes pitter-pat when I first see it on the store shelf. You can't completely remove the fan boy from the smell of fake, retro-style cardboard.

And, to me, one of the many great parts of A&G each year is the framed relics.

I know, I know, relics are sooooo 2002. But I'm talking about the design of the relic card, not what the relic actually is, because we all know they're just cutting up carpet samples now.

I like the framed relics because they are -- or at least were -- colorful and stand out. Even if you pulled a boring gray swatch, you at least had the bright jungle boogie frame to scream out to everyone "HEY! I GOT A RELIC!!!!!!"

What I don't like is the trend of A&G relics the last couple of years.

If you haven't noticed they're getting more and more boring.

And, yes, it's retrospective time. Here is the debut year of Allen & Ginter relics from 2006. Note the Polynesian-like design. The border is white and the look is evocative of some early 20th century island paradise fantasy. I don't know if that's what Topps was going for, but that's what I get out of it. In short, I like it. 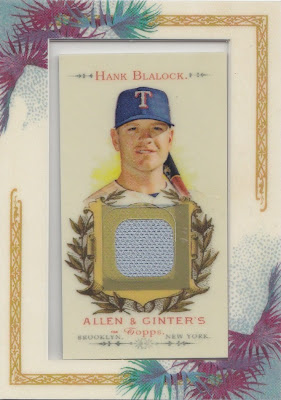 In 2007, the relic borders changed very little. Purple plant life was added and that's about it. I prefer a little more change than that, but I can see going with what works. These still look good to me.

(By the way, I do not own any of the preceding three cards. I did pull the fantastic David Wright but that was swept up in a trade long ago). 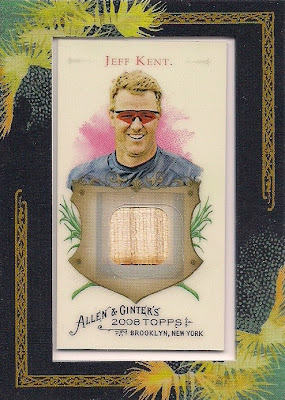 In 2008, I received my first look at Allen & Ginter and my first look at the relics. Truth be told, I didn't like the design that much at the time, especially in comparison with 2006/07. But I've since come around and appreciate the change while staying with the whole jungle theme.

Also, this Jeff Kent relic gets more and more awesome every year. I can't say I ever really liked Kent or have watched Survivor, but his appearance on that show makes this card a keeper forever. In 2009, A&G brightened up the plants on the borders. (I know I'm showing an autograph instead of a relic but back then A&G used the same borders for both relics and autos). It's almost a combination of the 2006 and 2008 borders. I enjoyed the look a lot.

Also, 2008-10 A&G did something I appreciate. It put the issue year on the front of the relic. 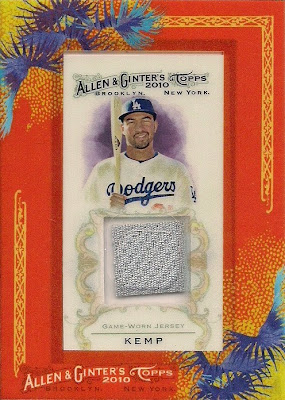 And now, 2010. The year A&G really got into the spirit of the island culture. I know some collectors didn't like these particular relics. But I like them a lot. A WHOLE LOT. I especially like them if you're getting a gray swatch in the middle there. It brightens your whole day. Sure, I got a gray swatch but look at all the orange and yellow and purple and blue!!! 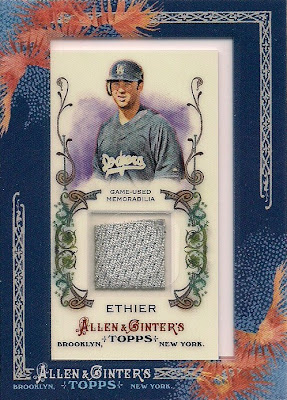 In 2011, A&G went with a more muted look. But it's still colorful, and I certainly enjoy the deep blue approach.

For those of us who liked the look of the relics, we had been lulled by A&G's pleasing island music rhythms for six straight years. Plants. Bright colors. Intricate patterns. What did it all mean? I don't know. But it sure looked good, year after year. Now pour me another Blue Hawaiian. 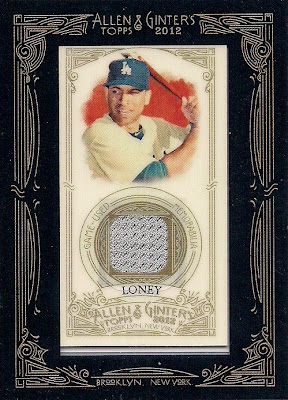 I know some folks like this, and they'll probably inform me of that shortly. I don't. For one, the scan looks a whole lot more vibrant that the actual card. Those etchings -- although they continue the theme of the base cards -- don't stand out nearly enough on the actual cards.

And where'd all the color go? Perhaps A&G wanted to place an increased emphasis on the card (and the gray swatch), but it doesn't stand out to me any more than any of the other years. This card is so boring that I haven't been inspired to even look to see if there are other Dodger relics for this year.

But at least we got the year back on the front ... heh.

My hope was that 2012 was just a one-time blip, that Topps would see the previous borders were much more exciting and revert to those for this year.

And then I got a glimpse of the 2013 design on Topps' Twitter page today. 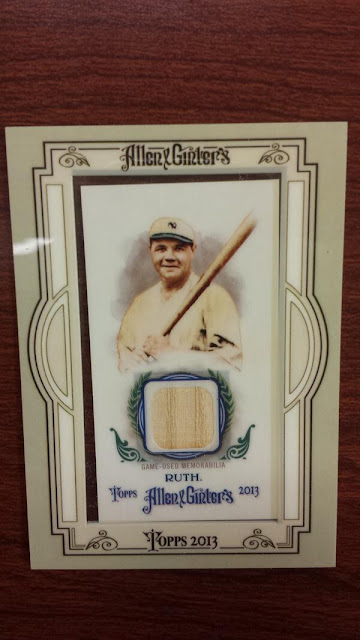 Granted, it's a Babe Ruth relic, so why am I complaining about the border?

Well, if I pull a Babe Ruth relic I promise I won't complain. But until then, good golly, that border is as lifeless as the atmosphere in the hospital cafeteria. Am I looking at taupe???

I'm not sure what this means. I know when we look back at cards from the '50s, '60s, etc., we note how the designs of the past reflect the artistry and ideas of the time.

What do the last two A&G relic borders say about us? We're dull as potatoes?

I want my island music.

I want my girls in grass skirts.

First with the August release date and now this.

UPDATE: There appear to be two different kinds of frames for relics this year. 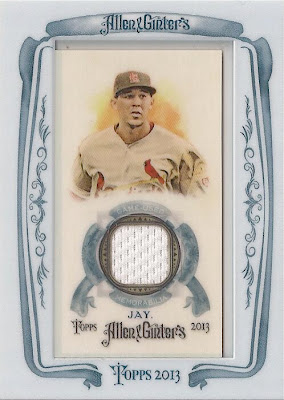 JediJeff said…
I think I am most shocked by the drastic change from 2011 to 2012, more than the whole 2012 look. I don't mine it. I just would have thought it would continue to evolve, instead on a huge leap in border change.

The thing with the early year frames - I really didn't like them. I thought they failed to come close to matching the design of the card within. Sort of a mish mash of color, design, and stuff. But with each passing day, they endear to me.
August 6, 2013 at 9:30 PM

View From the Skybox said…
The first of the two 2013 borders is definitely an ode to the Great Gatsby popularity. In fact, I think the whole set is now trying to be unapologetically Art Deco.
August 7, 2013 at 1:30 AM

Ana Lu said…
Topps are tying to pull A&G even closer to the GQ set style or what?
I only pulled a 2011 relic which are my favourite set, not only the relics frame but the base cards desing too.
Thia year design looks...aseptic.
August 7, 2013 at 10:26 AM

Commishbob said…
I hadn't thought about it (I only have A&G from the last two years) but when you line them up like you did the change is obvious. I certainly agree, the 'floral' look is so much better.
August 7, 2013 at 10:49 AM

AdamE said…
I hate, hate, hate the framed relics. Not just this years, every years. To me they would be soo much nicer without the borders. Just a mini relic or auto card.
August 7, 2013 at 1:50 PM

the sewingmachineguy said…
Those Ginters framed cards were cool.
Hope you're well.
Peace, Larry the smg
August 8, 2013 at 2:24 PM