Celebrating a mail off with a mini-off

August 30, 2013
I broke through August austerity to mail off a select few (re: three) packages today. I really shouldn't have done it. It looks like August austerity will stretch half way into September now. But sometimes you gotta live mas, as the TV zombies say.

To celebrate, I pulled out the other half of the package that Robert sent me. It was several minis from this year's Allen & Ginter, which I really appreciate because it's been too long since I've added anything to the frankenset binder.

Just a few hours ago, I had great fun going through the binder and holding a mini-off, deciding which minis get to reside in such exclusive company and which will be destined for trades or eternal box banishment.

I'd like to relive that for you now. But before I do, I want to say that I think the minis with this year's A&G design (horizontal cards excluded) look terrific. Possibly the best-looking A&G minis ever.

First, the minis that gain entrance because there was no one blocking their path. 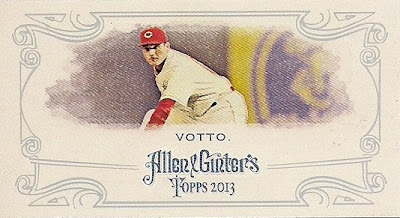 Not a great card at all. But I'm happy to have Votto join the party. 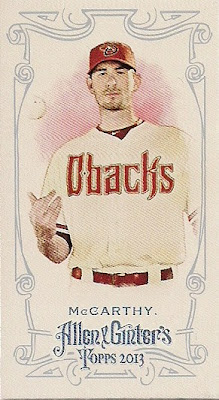 McCarthy gets lucky because he's a short-print. I don't take kindly to snakes. 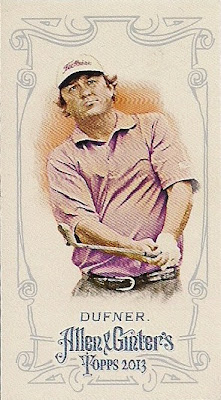 Another short-print, of the PGA champ.

I gladly give Dufner a place of honor, not just because of his title, but because of his lovely betrothed. I'm not the first one to say this in regard to the Dufners' recent marriage, but as a somewhat dopey-looking person myself who managed to marry well out of his league through apparent charm -- holy, smokin' smokin' daaaaaammmn! 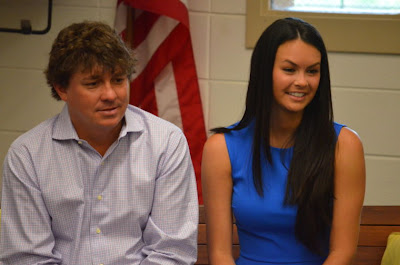 You rock on, bud.


OK, now for a little competition. 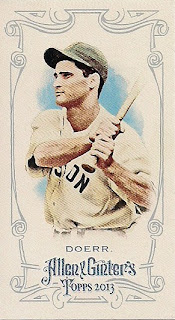 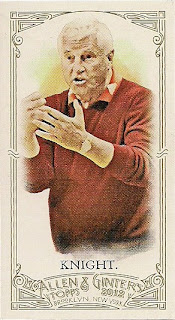 In a battle of the Bobbys, Doerr wins easily. First, he's a ball player and Knight is a coach. Secondly, Doerr is an old-time ballplayer who doesn't appear on a lot of modern cards. Third, I can't get myself to not see Knight choking someone in this photo. Fourth, well, I'll just say it, Knight's a jerk. 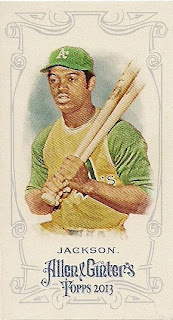 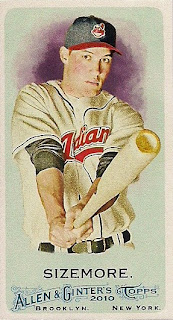 
This is not the most flattering photo of Reggie Jackson. Speaking of dopey, Reggie looks like a Fat Albert cartoon character on this card. But I do appreciate him being featured as an Oakland A. And that is more than enough to defeat Sizemore, who could be working in construction now for all I know. 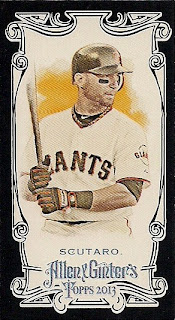 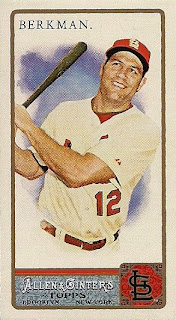 This is not a difficult choice, I don't care what you say. Scutaro is the luckiest baseball player in at least 30 years for what happened last year. Think Bucky Dent, 1978. And for selling his soul to the devil, he and the Giants are paying for it this year. I don't even see the black border (which I might add aren't as nice as I thought they would be. I'm all for the return for the solid black border -- I missed it these last couple of years -- but the art-deco design makes it look cheapish to me). 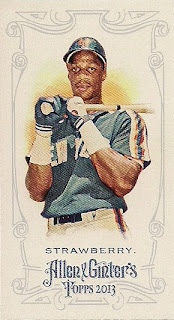 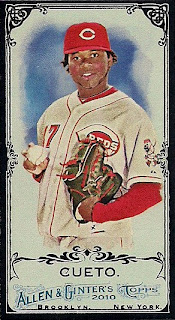 
I'm going with Cueto. This one hurts a little. But just a little. I like my players from the '80s much better than I like present-day players. But if you knew how much heckling I gave Darryl back then, there's no way you'd want me to forget that. And then that whole fiasco with the Dodgers. Plus, I can find a Strawberry card in my collection in half a second. His cardboard isn't exactly rare.

Besides, I got to send mini Strawberry to Max today. 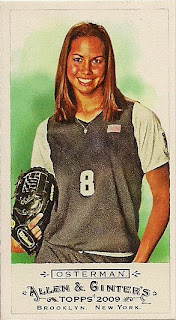 Again, I have lots of Eddie cards (he played for the Dodgers, too, you know). This is my only card of the lovely Cat, a very sought-after card in 2009, by the way. I wish to goodness Murray could replace one of the stupid Yankees I have in this binder, but the frankenset never shows any mercy.

So, Eddie will probably be on its way to my good buddy Commish Bob someday when mailing is back in full force again. Scutaro is ready to head to Adam's new residence. As for Sizemore and Knight, I'll save them for mr. haverkamp.


Thanks for celebrating my mail-off with me.

I can't wait for the day when a trip to the post office is drudgery again.

Nachos Grande said…
The mini frankenset is so much fun - I almost want one too, though this round of choices wouldn't have been nearly so difficult for me.
August 30, 2013 at 7:47 PM