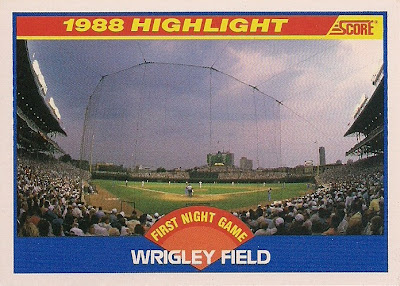 Today is another one of the holy days in night game history. It's the 25th anniversary of Wrigley Field's first scheduled night game.

Unfortunately, the game was called off because of thunderstorm in the fourth inning and the first official night game at Wrigley Field didn't actually occur until the next day, Aug. 9 against the Mets. In true Cubs fashion, they even botched completing a game under the lights.

I've never been a fan of the Cubs, and I don't even understand their fans. Their allegiance to a franchise that has been inept for so long baffles me. I suppose that's more of a commentary on me than anybody who roots for the Cubs, but I just can't see following a team that's been such a drag for 100 years.

Yet, there are the Cubs fans at every game. Singing away. Drinking away. So damn happy for a team that disappoints every year.

Even though I wouldn't care if the Cubs were contracted tomorrow, I'm actually ticked off at the franchise for robbing fans of their cash all these years. Why does such incompetence deserve such faithfulness?

Through it all, Cubs collectors have been some of the most pleasant and generous in their trades with me. I'd be pretty cranky if my team was on a 100-plus year losing streak. But I haven't seen that at all from the Cubs collectors I know.

Just a couple of days ago, out of the blue, Tom from Let's Play 2, who I haven't heard from in probably more than a year, wanted to know if I wanted some Mike Piazza cards.

So giving. So good-hearted. Even though their team is below .500 AGAIN.

I don't know, if my team was so bad for so long, maybe I'd be sending emails to everyone announcing I'm giving away cards, too. Then I'd cancel my cable and internet connection, burn all my baseball books, stomp on the Ken Burns "Baseball" DVDs, and live in the attic.

But I don't think Tom did that. I don't know, maybe he did. I kind of lost track after I received thirty-two different Piazza cards.

He even sent some Mets Piazzas, which will come in handy, I'm sure: 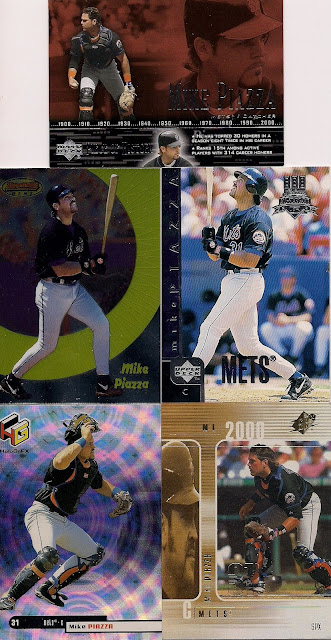 But here are the Dodgers Piazzas, which is what really counts: 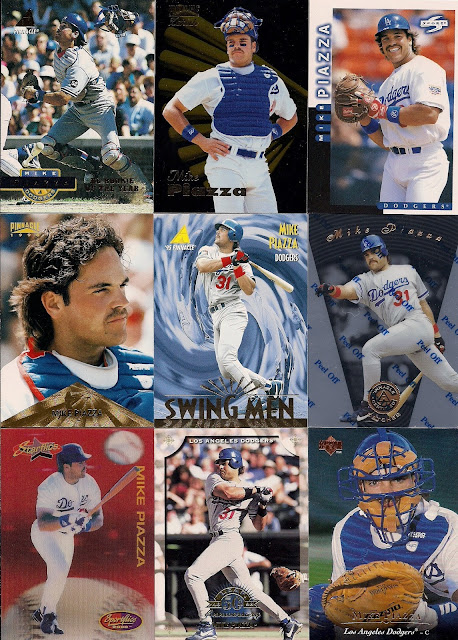 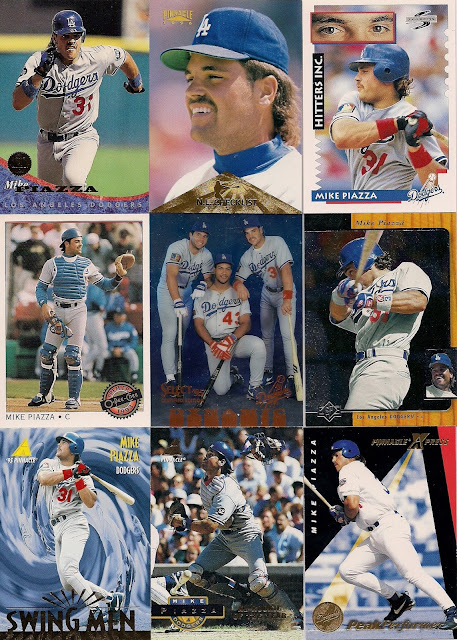 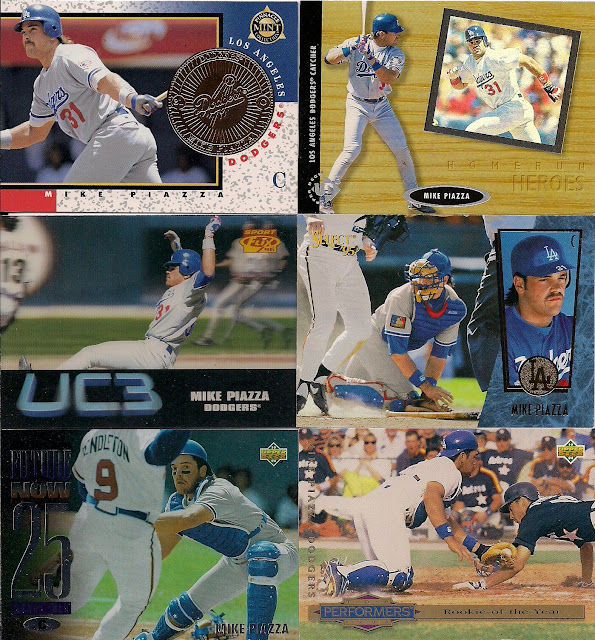 Sadly, even though I am missing many cards from the 1990s, I own all of these Piazzas already.

These precious three managed to fill a hole: 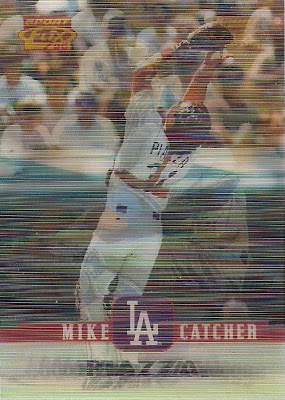 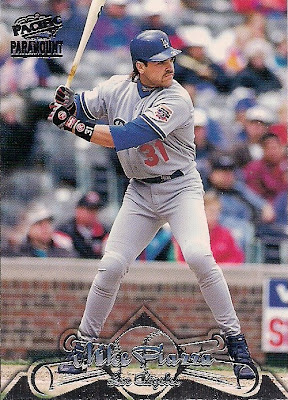 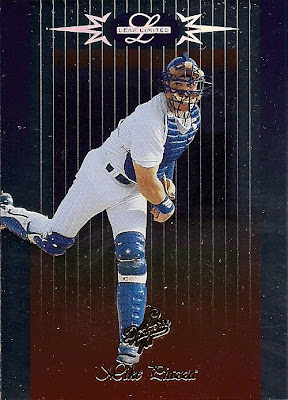 Three Piazzas that I need is fantastic, no matter what the ratio. 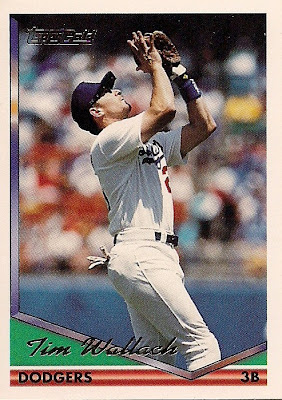 This was once one of the many gold parallel '94 Dodgers that I still needed. 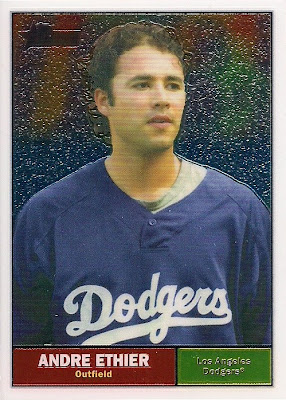 This cuts down the 2010 Heritage Chrome Dodger needs down to one. 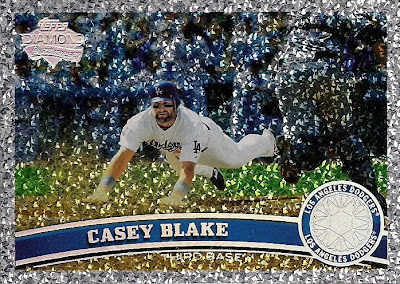 So, once again, a Cubs fan delivers when his team can't.

That's not to say that the Dodgers have done so hot these last 25 years.

Tom recognized this, too, by sending me this: 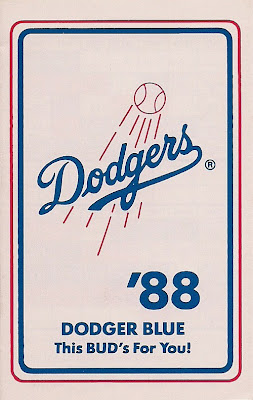 That's the pocket schedule handed out that year. 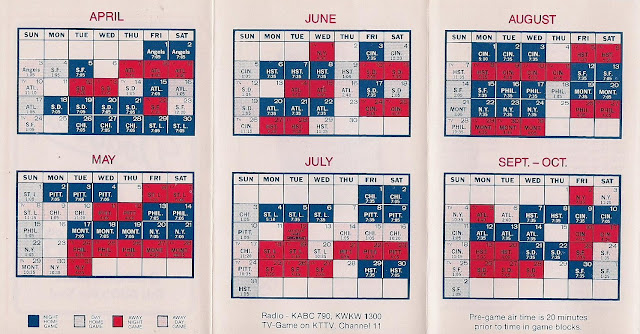 Those are the dates that added up to history. The Dodgers' sixth world championship.

Tom also sent the 1989 pocket schedule, which may seem a little strange, until you see what was featured on it: 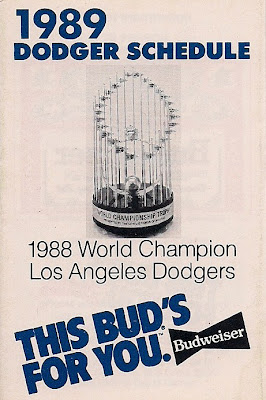 Even a Cubs fan knows what the World Championship Trophy looks like.

So, yeah, I'm having a little fun with Tom and the Cubbies today on their 25th anniversary of a night game attempt. I really do appreciate this card package and I do appreciate my Dodgers having someone to sweep on their schedule.

I'm certainly not one of those fans who changes their allegiance just because of a few bad years. And I know how fans can get if your team wins repeatedly over the years. Remember, I live in Yankees country, and not far from Red Sox country.

But as for the Cubs, I think I might have become a White Sox fan by now.

Yeah, I know what their record is this year, too.

Night Card Binder candidate: Wrigley Field, First Night Game, 1989 Score, #652
Does it make the binder?: Yes. It's not very nighty, but at least the lights are on.

runfore!kelloggs baseball cards said…
I went to that game, but I didn't seem to get onto the back of that card. The game would have been completed, but Rick Sutcliffe was the starting pitcher and he was more of a human rain delay than Mike Hargrove.

Since Cub fans have few good memories I could be wrong on this one. The highlight was the Cub players sliding on the tarp like it was a slip n' slide.
August 8, 2013 at 8:16 PM

Wrigley Wax said…
We Cubs fans have to be nice---you can't be obnoxious when your team is in a 105 year slump!

And yes, there was some slip and sliding thst night. in fact, one of the tarp sliders was Greg Maddux.

Commishbob said…
I made it to Wrigley this year. I think my favorite thing about it was the fact that every one of the ushers seems to be old enough to have seen the last Cub championship.

Wrigley is a pit. It's falling apart, and the people that live around it are mostly jerks. They whine about wanting a good ball club, then complain when the Cubs want to generate revenue to get said ball club with advertising.

Rosemont made an offer to build an exact duplicate of Wrigley for the Cubs to move to - they really should have taken up the offer.
August 9, 2013 at 10:10 AM

GCA said…
Sat in the bleaachers at Wrigley on Friday Aug 2 to watch them against your beloved Dodgers while on vacation. Puig had a nice game and the Blue won 6-2 over the bearlets.
I have pictures of Kershaw shagging flies, Ethier and Puig in the field and other misc shots of pre- and game action.
August 9, 2013 at 3:20 PM

togh said…
Glad to hear that you needed several of those cards. Since I just collect Cubs I am always looking for fellow collectors that need cards of their favorite. I now have a stack of Frank Thomas that I am looking to find a home. Then about the general Cubs comments.....I beleive that we are on the way back now and just think how big the party will be when it does happen.
August 9, 2013 at 4:45 PM