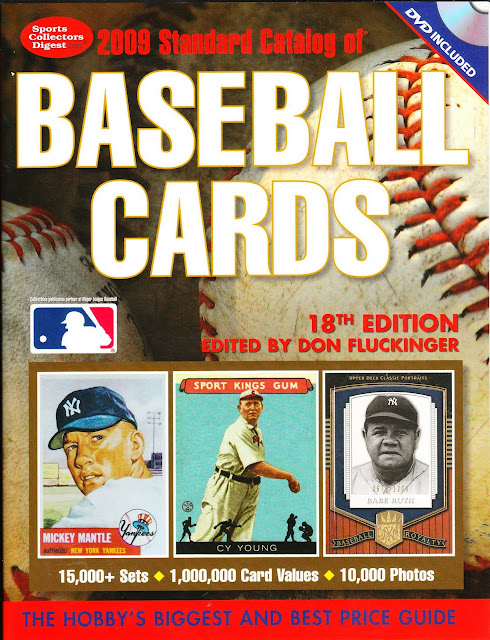 I am about to let my card-collecting geek flag fly here. Not that I don't fly it proudly every other day on this blog. It just will be especially apparent this time.

Both sides of my family know that I collect cards. They can't help but notice. If they visit the house, cards are out in plain view. If I go to visit them, I often bring some sort of card-collecting identifier with me, part of my collection or a book or stray packs or something. Cards are almost my security blanket.

But even though both halves know that I love cards, only one half really does anything about it. And it's not the half that I lived with for the first 18 years of my life.

That's a killer because my parents enjoy the auction scene. They're there to bid on something besides cards, but every once in awhile they'll see cards at the auction. And they'll wonder if it's something I'm interested in. But that's as far as it goes. There are no bids, no phone calls to me or anything. Three weeks will go by and one of them will bring up the fact that there were cards at the most recent auction, in the most casual way possible: "There's soda in the back hall and ice tea in the refrigerator and we saw some baseball cards at the auction last month."

Meanwhile, my brain is screaming "AND YOU DIDN"T DO ANYTHING??!!"

So, they're no help at all.

But the other half, my wife's side of the family, are proving to be pretty accommodating. That's funny because there isn't one person on that side who ever collected a card. I'm pretty certain none of them have even seen one baseball game all the way through. But I love them because they try.

My brother-in-law and sister-in-law will stumble across cards in their travels and get some for me. They once turned up a couple of boxes of product from about 10 years ago. All of it was new to me. I was very grateful.

And yesterday, I found out that my mother-in-law picked up the item you see at the top of the post.

It's the Standard Catalog of Baseball Cards, the most epic card catalog ever. It's six inches thick and features more then 1,800 pages and just about every card set since Teddy Roosevelt was a rug rat. It is the most fascinating thing I have ever seen. From 1977 Topps Proofs to 1899 Chickering Studio Boston Beaneaters Cabinets to  a 1980 3-card set of Reggie Jackson's hot rods. It's all in there.

It'd be nice to have all the stuff in the catalog, but I'm a simple guy. If the book can clear up my constant questions over 1990s cards, then it has done its job.

I would see this giant volume in the bookstore and drool over it, never being able to throw down the 45 bucks to take it home. Leave it to my mother-in-law to buy it, not even knowing whether what she had was anything I would want.

Even funnier, the catalog was sent home with my wife, who kept it stashed away for a couple of weeks, completely forgetting to tell me that she had it. Finally, reminded by her mother again, she wondered if it was something I'd be interested in having.

I think the grateful puppy dog look on my face told her "yes."

And goody, it comes with a DVD. 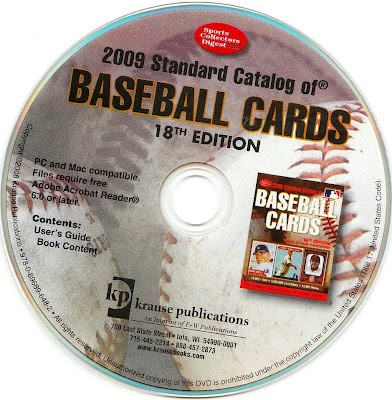 The whole book is on this little item. Pictures and all. Awesome.

You may wonder when I'm going to get to the part about the price guide.

It's true, each card listed is also priced. But if I cared about prices, I would have told my mother-in-law to go back and get the 2010 version. I don't plan on looking at the prices other than to remark, "holy smokes, I'll never have THAT card."

But the rest of the catalog is fantastic.

And you can look forward to me being a know-it-all in my comments. Even more than I try to be now.

On the other hand, I guess I can't say "I have no idea what set this is" ever again on the blog.

Thanks a lot, mom. I've got to do work again.

Cardboard Icons said…
That's awesome. Gotta love others who think of you when they see anything card related. On the other hand, my in-laws have no clue what it is that I am doing with all of these boxes. To them it is just junk.
May 3, 2010 at 3:17 AM

My family, specifically my dad, knows what I like because we're all in the antiques and collectibles biz. So, now and then he'll bring me home some neat stuff... And sometimes he'll bring me home junk wax. S'all good though. :)
May 3, 2010 at 10:44 AM

Captain Canuck said…
my dad gave me that very volume for xmas '08, under strict tutelage from my darling wife.
he still smiles every time he sees me pouring through the pages, feverishly looking up something of which he has no idea...
May 3, 2010 at 12:29 PM