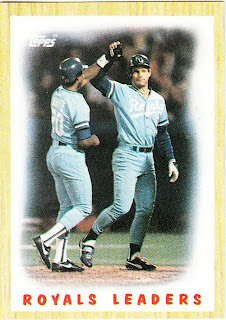 Thanks for the advice on storing the gigundo cards. I will probably search out some of those massive top loaders and store them in pages and a binder because I like the idea of how that looks. I may frame one or two, but there just isn't a lot of available wall room in the house, if you know what I mean.

Anyway, that's not why the night card is here. It's here because I was having trouble getting back to sleep the other day.

Normally, when I wake up in the middle of the night and can't get back to sleep, I switch on the TV or computer, or open a book. After an hour or so of that, I'm ready to drift off again.

But because of my wacky work schedule, my "middle of the night" often lands around 7 in the morning. If I wake up then and can't get back to sleep, there's no use in heading for the TV or computer because the rest of the house is running around like headless chickens getting ready for work and school. It's way too hectic and frenzied an atmosphere.

So on those occasions, I try to stay in bed, clear my mind and hope it works. Counting sheep and that kind of thing doesn't usually do it for me.

I decided to figure out which past player and which current player I think of first for each major league team. In a way, those two players symbolize each team for me. I left out the Dodgers because I think of too many players when I think of them. So, this is what I came up with:

For the past: some of these names are obviously influenced by my childhood. You could probably pick better representatives for the Astros, Cardinals and Twins, but childhood memories are strong. Also, I'm not crazy about the fact that I think of Ryan first with the Rangers. He was in his prime with the Angels and Astros. I consider his attention with the Rangers a little bit of a media creation, although he was still exceptional for someone his age at that time.

Some players, like Babe Ruth and Willie Mays, I never saw. But their history is just too overwhelming not to think of them first.

For the present: Wow, there were some teams that really made me struggle. For the A's and Pirates, I kept thinking of a name and then going, "no, he's not on the team anymore." I must've done that 3 or 4 times apiece for each team. It's a wonder I ever got back to sleep.

Oh, and I couldn't tell you one thing about Howie Kendrick. It's just the first name that popped in my head.

So, I suppose you're wondering, how did this work as a sleep aid? (and I don't mean the post, smart-ass).

It worked great. Feel free to use it.

Dennis said…
As someone who's sleep was once greatly affected by working the grave yard shift, I appreciate & enjoy these sorts of sleep aids.

Anonymous said…
Did you set out to leave a team behind fom the NL Central at the Concepcion of this? Or did you call Geronimo, jump in, and just forget about someone? I know you aren't a Johnny come lately sitting on the Bench, but for Pete's sake, you Rose to the occasion for every other team. I hope I've giving you a big enough Klu as to who you forgot. By George, I know you Foster a dislike for the team, and perhaps you Drew a blank, Stubb-ed your mind, and couldn't keep Rolen with the entire major league? I know their history only spans a Vander Meer 141 years. Barry the hatchet, say "It's a Larkin," and finish the job.

Unknown said…
How can you not think of Clemente when you think Pittsburgh Pirates?
May 8, 2010 at 2:11 AM

Anonymous said…
Actually it didn't take that long at all. Neither did your response, which makes you a pearl in the Ron Oester.
May 8, 2010 at 2:12 AM

Play at the Plate said…
I'm with you on the Stargell reference for the same reason. Ryan fits the bill for me with three teams:Angels, Astros and Rangers.
May 10, 2010 at 3:15 AM