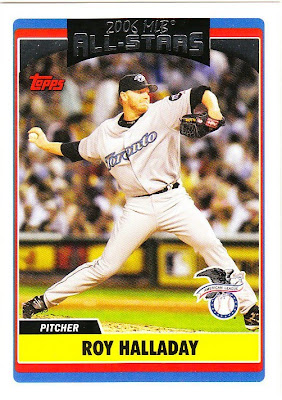 I admit that I have favorites when it comes to baseball. I don't mean just a favorite player or team. I mean a favorite type of player.
I favor pitchers. And I don't try to hide it. I like pitchers more than hitters. I relate to pitchers more than hitters. I think pitchers are smarter than hitters. Generally speaking.
The players that I hold in the most awe, regardless of era, are pitchers. Among my favorite players of all-time are Sandy Koufax, Bob Gibson, Pedro Martinez and Greg Maddux. The 1978 season by Ron Guidry, the 1971 season by Vida Blue, the 1988 season by Orel Hershiser inspire more appreciation in me than the greatest home run performances of all-time.
When I go to the ballpark, I want to see 1-0 masterpieces. Leave the 14-13 trainwrecks to the ADD crowd, the rubberneckers who can only pay attention when it's FAST and LOUD. Give me Don Drysdale against Juan Marichal in 1966 when the average runs per game was something like 2.7 per team.
So, yes, I freakin' love what Roy Halladay brings to the game. A low-key master who will pitch as many innings as it takes and is so good that managers will suspend their knee-jerk reaction to yank any starter who might venture into the sixth inning. Halladay dares you to take him out.
Halladay is so good that he has legions of collectors. I can't keep Halladay cards in stock. And considering he spent the vast majority of his career in Toronto, not exactly the center of major league baseball, that is flat-out amazing. That's how good he is.
Halladay's perfect game on Saturday night against the Marlins was the third no-hitter this year, and a lot of people believe it won't be the last.
That is my hope, too. Remember 1990? There were seven no-hitters that year (one was a combined no-hitter by the Angels' Mark Langston and Mike Witt). The number was so remarkable that Score featured a subset in its 1991 set that included a card for every no-hitter. I loved that subset.
Here were the no-hitters that year:
April 11: Mark Langston/Mike Witt
June 2: Randy Johnson
June 11: Nolan Ryan
June 29: Dave Stewart
June 29: Fernando Valenzuela
Aug. 15: Terry Mulholland
Sept. 2: Dave Stieb

What an ass-kicking group of pitchers that year. Four in one month and two on the same day!
In fact, if you remember the Score subset, there were actually TWO MORE no-hitters that year, pitched by Andy Hawkins and Melido Perez. Hawkins lost his no-hitter after giving up 4 runs in the eighth inning, and Perez's was a shortened six-plus inning affair. MLB no longer recognizes them as no-hitters.
The following year, 1991, there were five one-man no-hitters, two three-man no-hitters and one four-man no-hitter. Here they are:
May 1: Nolan Ryan
May 23: Tommy Greene
July 13: Bob Milacki/Mike Flanagan/Mark Williamson/Gregg Olson
July 28: Dennis Martinez
Aug. 11: Wilson Alvarez
Aug. 26: Bret Saberhagen
Sept. 11: Kent Mercker/Mark Wohlers/Alejandro Pena

Aside from those two years, the only year there were more than 6 one-man no-hitters was 1884 when there were eight.
So are we going to get eight no-hitters this year?
I doubt it. But I certainly wouldn't think it was a bad thing.
Chicks may dig the long ball. But I ain't a chick.

Two Packs A Day said…
Sucks that Halladay is a Phillie. He's been my favorite pitcher for the last several years. I used to snag certified auto cards for $4-5 when he was a blue jay. I haven't bought any certified auto cards of him since because card prices have risen since he moved on to a higher profile market and into a higher conscience of those that are not die-hard baseball fans.

I wish he stayed in Toronto so I could continue accumulating his auto/relic cards when almost noone knew who he was.

He's still my favorite pitcher so I congratulate him on tonight's effort and the season so far and it'd be okay if he won a world series ring as long as the phils don't have to deep-six the Dodgers in the playoffs on the way to a WS.
May 30, 2010 at 3:56 AM

madding said…
I thought the Stewart and Fernando no-hitters in the same day was the most amazing thing. I was in high school. It was really painful to watch the Cards get no-hit by the Dodgers, though. I didn't get to see the Cards all that often back then, either.

Brian said…
Maybe now Doc will get the recognition as MLB's ultimate pitcher he so richly deserves.

As a staunch Jay fan, I've awed (?) at many of his masterful performances and, yes, I still "mourn" his passing to the Phillies. GOOD ON YOU, DOC!!!

Collective Troll said…
I'm with you Owlie, I aint a chick and I love a good pitchers duel. I have seen two no-hitters in person and hope to see another one day. The suspense when a pitcher has a no-no past the 6th inning is great. I would rather piss my pants than get up and miss one second...
May 30, 2010 at 10:04 PM