May 17, 2010
(Today, May 17th, is the day we honor pack rats. I'm serious. Today really is Pack Rat Day. I looked it up and everything. And you know what that means? It means I finally found CARD COLLECTORS DAY! Pack rats and card collectors are practically the same thing. So let's all enjoy OUR day. Time to appreciate pack rats, card collectors and cards. It's Cardboard Appreciation. This is the 65th in a series): 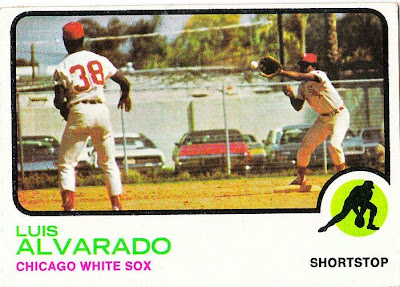 This is a first for me. For the first time since I started this blog, I saw a card on another blog, thought "I must have that card," and bought it right there and then.

I know that this is nothing for you avid ebay shoppers. But I'm much less impulsive these days. If I see a card online that I want, I often weigh the price and my budget before I get it. Even if it falls within the right parameters, it still may be weeks or even months before I pull the trigger. As you get older, there really are few "must-have" things in life.

Being practical is both good and bad. I miss out on lots of cool cards this way. But it also saves me from buying a box of 2010 Bowman and getting stuck with a pile of worthless players that will haunt me in my sleep for the next 20 years.

But this particular card I HAD to have. Now.

Fortunately, it met my very practical criteria. First, it's worth next to nothing. Second, it's an awesome card. My goodness, look at it. What a fantastic photo.

The 1973 set is filled with strange action photos. It's been mentioned here and many other places. One of those places is 1973 Topps Photography. That's where I saw the Alvarado card.

I am familiar with a lot of the '73 action photos. The Rudi card, the Crowley card, the Agee card. The Ellie Rodriguez card, the George Scott card, the Dave Rader card, the Frank Duffy card, the Bill Freehan card. They're all cool and strange at the same time. But I had never seen the Alvarado card until last week.

Chris, on his site, mentions how the photo makes it look as if the White Sox are playing in a municipal dirt lot. And he mentions the fantastic gas-guzzling '70s cars in the adjoining parking lot. Except for the players in uniform, it really has the feel of a playground ballgame in the 1970s.

And that's why I like it so much. It really takes me back to the time when I was a kid in the '70s. We played baseball all the time. Although I lived in a residential area with plenty of green around (and not a palm tree in sight, unlike this photo), we would also play on dirt lots periodically and even blacktop, which made sliding treacherous.

But the part that really draws me to the time when I was 10 are the cars. To younger folks, these may look like bizarre machines of the past, driven by less savvy people. But these were the cars of my childhood. They'd drive past me as I walked to school. I rode in some of them.

But most importantly, there is a connection between this card and my childhood because I was insane for cars when I was a kid.

My fascination for cars came before my fascination for baseball and baseball cards. I collected Matchbox cars like a peewee addict and couldn't wait to spend my allowance on the newest tiny vehicle with doors that opened or -- most fantastic of all -- a trunk that opened. I would count my collection. I believe I had around 125 cards, which is pretty good for someone who stopped collecting them around the age of 11.

I still remember how much they cost -- about 80 cents per car. (I nearly freaked when they jumped over a dollar) I also remember I had a bias against "Hot Wheels" cars. They didn't look realistic to me. I wanted cars that I saw on the road everyday.

I used to be able to name every make or model of car on the road or in my collection in the '70s. I can't do that anymore. I can't even tell you what those cars are in the lot, although I'm sure a lot of you could.

My interest in cars has completely disappeared. A car is now just a means to get me from place to place, and all I want out of it is something that will last for several years. It's still shocking to me that something that I had SO MUCH interest in I have zero interest in now. I sometimes wonder if that will happen to baseball and cards someday.

Anyway, this card has been purchased and has arrived. And because of it, I'm liking the '73 set a little more than I once did.

So I'm guessing this was a spring training roster player who didn't make the active roster in '73 or possibly changed his uniform number.

All in all, it's a tremendous card, and I appreciate that someone featured it on their blog. Because now it's mine.

Anonymous said…
It's funny you had that reaction to seeing this card, 'cause as soon as I saw this on your blog moments ago... I immediately decided I would own this card & possibly start a collection of unusual & supercool cards.
May 17, 2010 at 7:21 PM

gcrl said…
nice. i featured that card a while back as part of my take on some sweet 73's.

there are only a couple other cards i can think of with cars in the background - 1981 topps dave goltz and 2004 topps (traded?) jose hernandez. i think dinged corners posted some others.

finally, i have seen a few cards on your site that i have bought shortly after, such as the steve finley ultra card with fernando's image on the outfield wall.
May 17, 2010 at 11:54 PM

Anonymous said…
My mom used to drive a 1969 Chevy Chevelle Malibu. I felt like a champ when she would pick me up from elementary school in it. Unfortunately, it is currently rusting away beside their shed because she doesn't have money to fix it up (the inspection ran out in 1997) and she refuses to get rid of it. I think I've mention before on my blog about her OCD and hoarder tendancies.


I REALLY hope that doesn't happen to me and my 1992 Camaro Z/28. I bought it when I was 16 and still drive it more often than not. I just hope when it starts breaking down that I either fix it right away or have the nerve to sell it.

Bo said…
Wow, switch 1980s for 1970s and I could have written this post. I think people like us would prefer matchbox cars to hot wheels because the numbers on the bottom made them easy to collect, and figure out which ones you were missing, much like baseball cards.
May 18, 2010 at 1:27 PM

MCT said…
It's funny, the cars were the first thing that caught my eye. I believe the red car in the center is a 1970 Chevy Chevelle, and the white car to its left is a Dodge Challenger. It's hard to make out the others. Near the right edge of the picture, you can see part of the tailights/back end of a blue car; it looks like it could be a 1971 or 1972 full-size Chevy (Bel Air, Impala, Caprice, etc.).

I had both Hot Wheels and Matchbox, but I always had somewhat of a preference for Matchbox because they were more realistic. I remember how Matchbox had the 1-75 numbering, too.

My kids collect them now, and Matchbox is still the more realistic of the two. In fact, I believe they are now owned by the same company, which at some point decided to position Matchbox as the "exclusively realistic" brand, giving up any attempt to compete with Hot Wheels on models that go outside that principle (much as Matchbox was in the '60s before Hot Wheels came along). I am amazed at just how realistic both brands are today, though.
May 20, 2010 at 9:13 AM