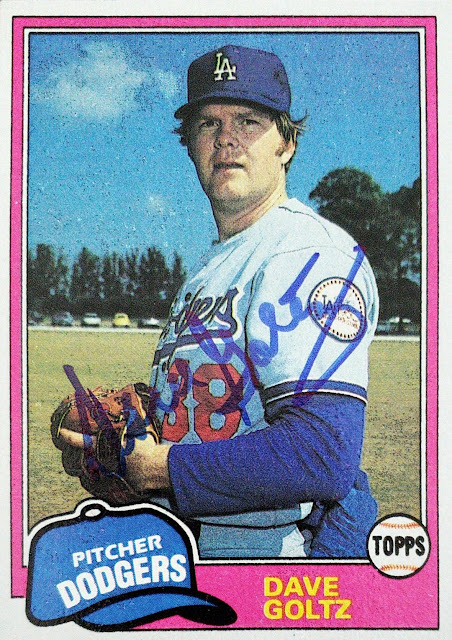 One of the best aspects of the hobby, something that keeps me coming to it again and again, is that it provides the best physical example, on almost a daily basis, that I'm making progress in SOMETHING in this life.
Success is all over my hobby, and I can't say the same thing for any other topic presently.
Whenever I add a card, when someone sends me a card, especially when that card is related to one of my main collecting missions, there is progress to behold. I stand up straight, put my hands on my hips, smile broadly at the brand-new card and chuckle smugly to myself.
OK, I don't do any of that. But I feel like doing that. SUCCESS! PROGRESS! I am doing things!!!
Bob from the best bubble has been sending me envelopes willy nilly lately. He is including cards that cover a wide cross-section of my card interests. I showed off the 1970 Topps Bills quarterback card a few posts ago. Some other cards helped me make a big leap forward in other card quests, none more so than this card: 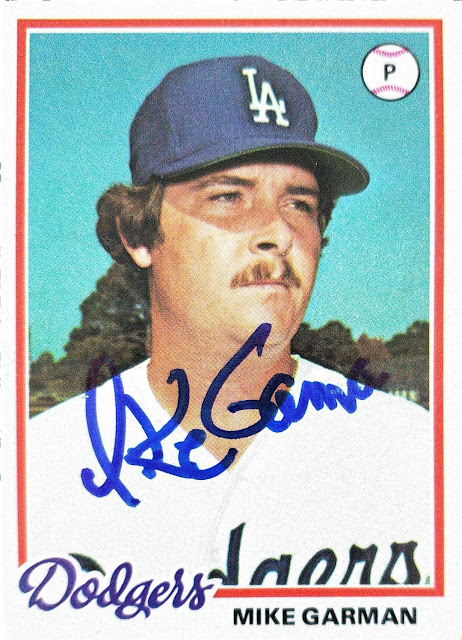 Yup, it's another Dodgers autograph that I didn't have, from Bob. But this one is special, because it's one of the needed cards for my signature collection that I addressed a little over a year ago.
I have been trying to obtain signed cards for the first Dodgers team that I truly knew. That team is the 1977 Dodgers squad that went to the World Series that year. While I collected Dodgers cards before 1977, this was the team I came to know as traditional fans know the team, watching the games, reading results in the newspaper, getting to know the personalities and how they work together.
My intent has been to hang all the signatures in one of those card display frames on a wall in my card room.
I haven't done a lot with it in the past year though for these reasons:
1. I need to buy one of those frames at Michael's and they haven't had them for a long time, probably because they freaked out when everyone became a card collector a couple years ago and scrapped any card-related product that could cause a riot.
2. I've been waffling about how to display them. The fact that the autos may fade while hanging on a wall is concerning and I think I'll just make color copies of my autographed cards and display those. But I have to get myself to do that, fighting with the printer and such.
3. I've committed to one of the 20-pocket frames because I like those better than the 16-pocket. And 20 pocket means I need autographs of more than 16 players from the '77 Dodgers. I need 20.
Mike Garman happens to be No. 17.
These are the options for No. 18-20:
Lee Lacy
Glenn Burke
Johnny Oates
Ted Martinez
John Hale
Ed Goodson
Vic Davalillo
Jerry Grote
Elias Sosa
Stan Wall
Bobby Castillo
Lance Rautzhan
There are others who played for the Dodgers that year, but I need cards of them wearing Dodgers uniform and they don't exist for those guys.
Some of the above would be easy to get, some not so much. Out of that crew, I remember Lacy, Oates, Goodson and Davalillo the most, and, of course, Sosa (Thank you very much, Reggie). So I'd probably focus on them, but I'm not too picky.
But that's some good progress!
Here's more progress: 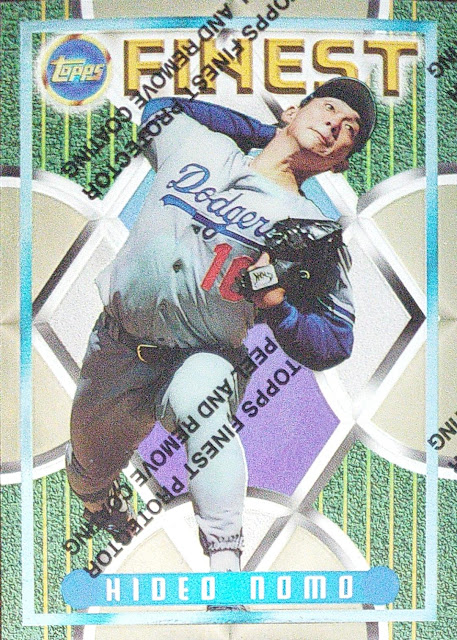 Bob found a card sitting on my Nebulous 9 for too long!
This is one of the many, many Hideo Nomo rookie cards. I have most of them, but this one stood out as one of the big elusive ones.
I need to rehaul my Nebulous 9 now, but that's always a good thing. It signifies PROGRESS! 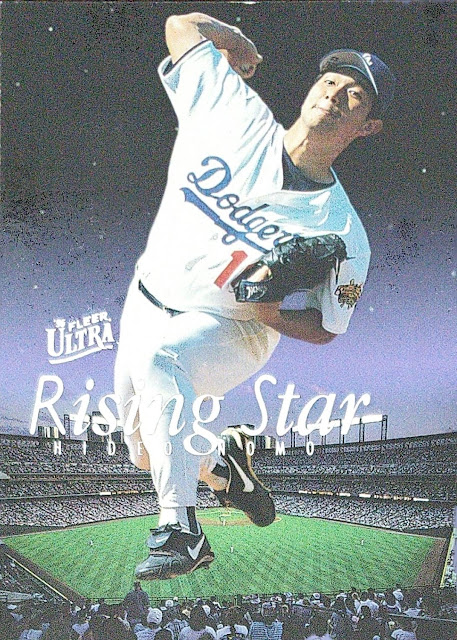 Here is another Hideo Nomo need. 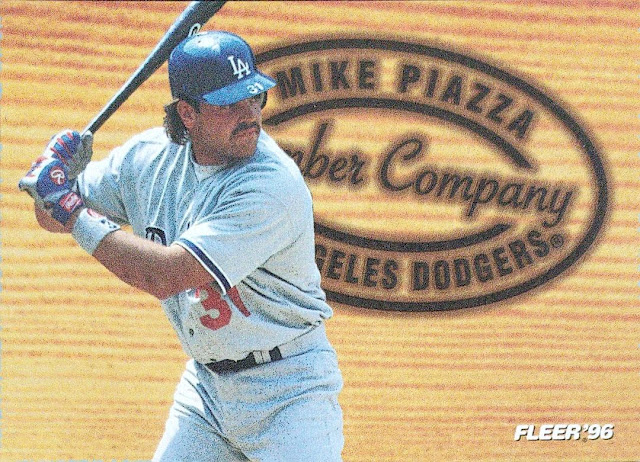 And that is a Mike Piazza need. It always feels like progress when I land a Piazza insert from the '90s. There are a crap-ton of them and I could throw away my entire collection and focus on acquiring only Piazza inserts from the '90s and still have plenty to do. 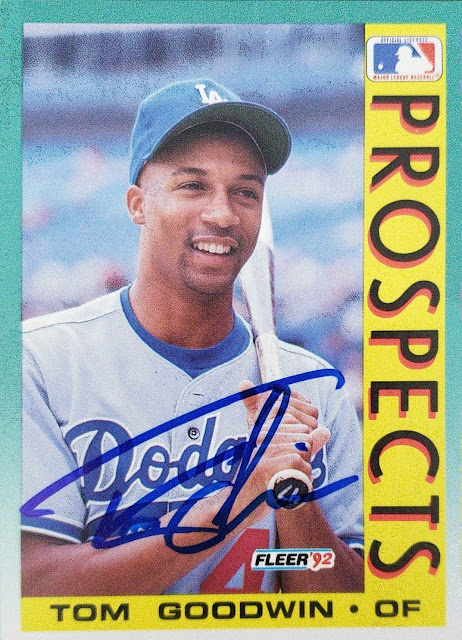 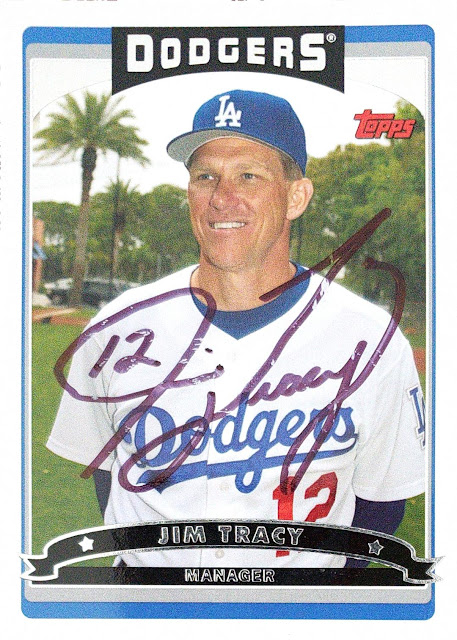 Bob just keeps pulling out these Dodgers autographs I don't have, he seems to have an unlimited supply. The Dave Goltz at the top of the post, I have his signature on an '82 Donruss card, but Goodwin and Tracy here are new. Throw in the Garman card and that is now 209 different Dodgers that I have in autographed-card form. Signature progress! 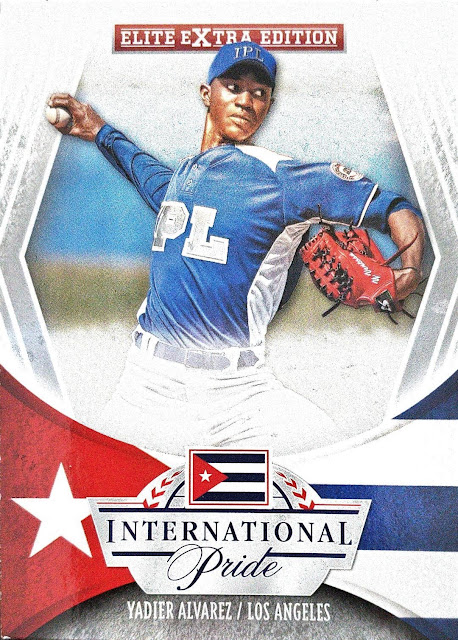 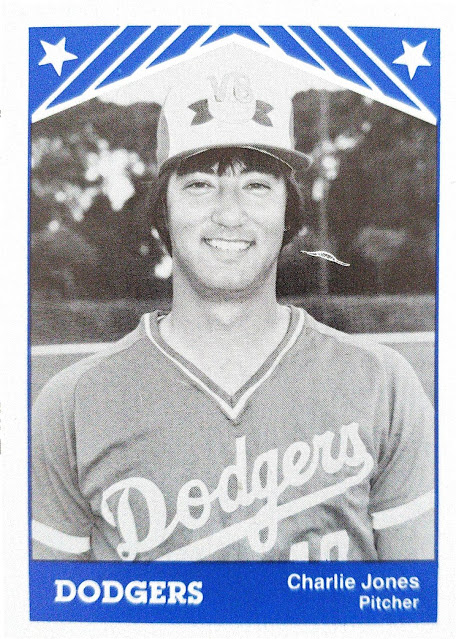 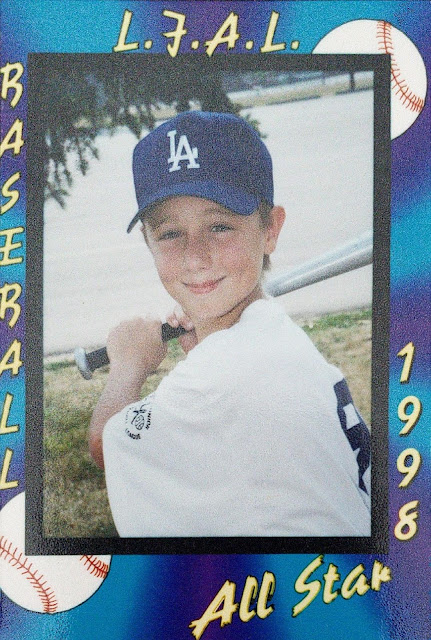 A few other cards from Bob that don't fit neatly into the Dodgers collection, especially the one of young Isaac Miller.
I don't think I want to start collecting cards of Little Leaguers, even if they are All-Stars. 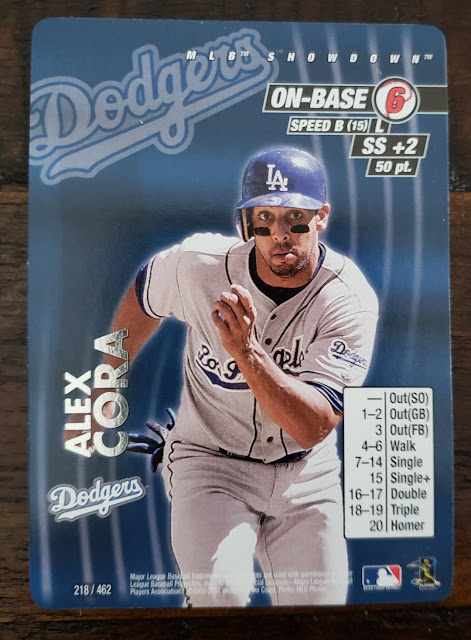 One last card to show of the Red Sox manager.
This card prompted me to get out my 2001 Dodgers binder, go to Trading Card Database, check off all the Dodgers I had from this set and realize -- I still need the Chad Kreuter and the two foil cards (Brown and Sheffield).
But now I have a want list on the blog and I feel like I've accomplished something, even if it is only MLB Showdown.
Progress!

Matt said…
The rising star nomo is sharp! I really need to update my want list and create one at cards over coffee
February 17, 2022 at 10:32 PM

Jon said…
If that one recent post of Jim's is anything to go by, Ed Goodson shouldn't be too difficult to get via a TTM request.
February 18, 2022 at 8:19 AM

Fuji said…
I like the idea of making colored copies of your autographs. I was one of those collectors that used a 20 card "Michaels" displays to show off signatures and most of those signatures faded within a few years... and my office doesn't receive a lot of sunlight. As far as those displays, it's a shame that we live on opposite sides of the country, because I have an extra laying around.
February 18, 2022 at 10:36 AM

RunForeKelloggs said…
That's a great idea for your the Dodger autos. I look forward to seeing how that turns out.
February 18, 2022 at 1:09 PM