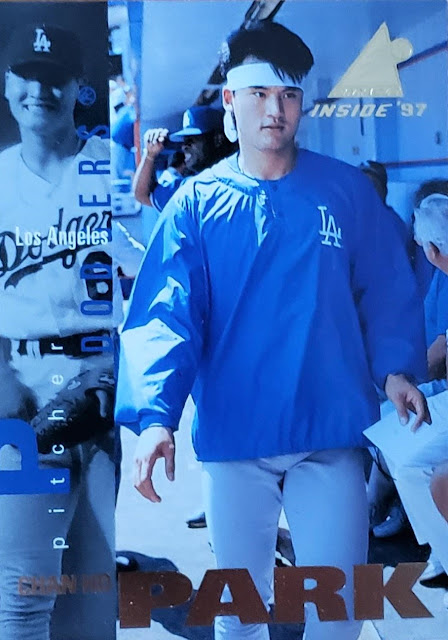 You guys have been holding out on me.
This is the final base card Dodger that I needed to complete the 1997 Pinnacle Inside team set. It wasn't Piazza or Nomo, as it traditionally is for this time period. It was Park and his wacky head band strolling through the dugout. 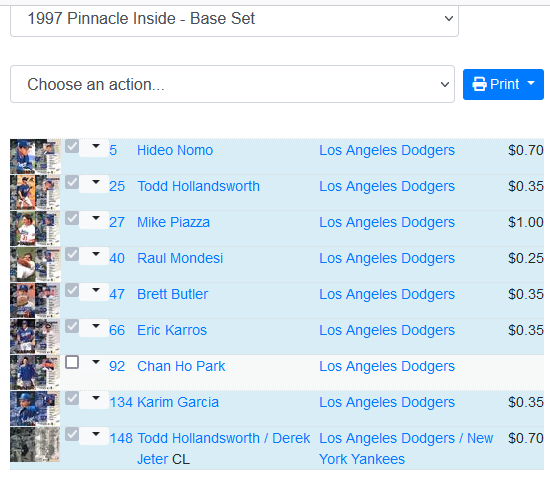 I didn't discover the card was the lone one missing until I was recently filing my late '90s Dodgers cards into Trading Card Database. I now have a much better idea of what I need from those sets from that very murky time period when I wasn't collecting cards and the industry was bleeding cards from every pore.
Since I didn't collect during this time, virtually all of the cards that I've received from the late '90s have come from other bloggers and other collectors who either did collect at this time or are doing a much better job of accumulating cards.
I've completed a lot of team sets through these means. But I do notice that I'm often not getting the full allotment. Beggars can't be choosers, but I've noticed this ever since my brothers and I received that grocery bag of mid-1950s cards way back when and all of the Yankees were missing.
It's just weird when a card of a player like Chan Ho Park is the one that is missing. This isn't 1994 Chan Ho Park, the latest sensation from overseas. It's three years later. So it's gotta be that head band, and type collectors who collect head bands, or wacky photos, or I don't know what. I just want my Dodgers.
So, I grabbed it recently for next to nothing and now the team set is complete. 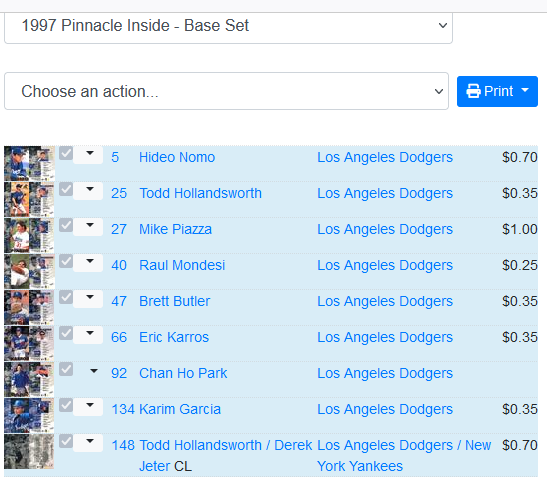 I've moved on to updating Dodgers cards from 2000 and 2001 on TCDB, which is still when I wasn't collecting.
I've noticed quite a few Gary Sheffield Dodgers cards that I need from that period, so maybe that's what I'll pursue next. I can knock off quite a few "just one card needed" team sets by doing that.
TCDB sure likes to remind you of what you don't have.

steelehere said…
Why is Raul Mondesi only worth 25 cents when all the other common players on the Dodgers are worth 35 cents?
February 22, 2022 at 8:02 PM

Crocodile said…
And I thought we were going to get a surgical look at the insides of Chan Ho Park. lol
February 22, 2022 at 8:58 PM

Fuji said…
I think this card deserves one more layer of appreciation... since it came from a pack that was housed in a tin can. Difficult to store? Yup. Wacky idea? Yup. But I'm that collector that appreciates card companies trying out new things like selling cans of cards.
February 23, 2022 at 10:09 AM

Bo said…
I've never seen this card; I'll put it on my own "wacky photos" wantlist.

night owl said…
I'm still working on inventorying my collection on TCDB. It'll be a long time before I get to making tradelists.
February 23, 2022 at 11:11 AM

Jason T. Carter said…
For polling options, you might look at Google Forms, although that would require one to click out of your site to vote. I don't think it is embeddable, but I could be wrong.

Jon said…
Wearing this headband might've been the last interesting thing that Chan ever did in the bigs.
February 24, 2022 at 8:34 AM