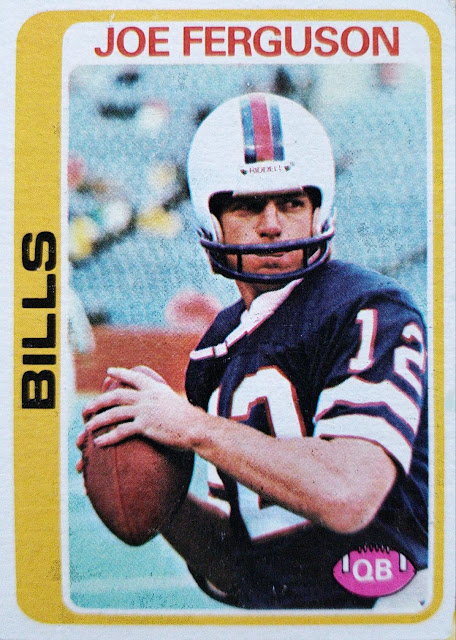 It's time for a football post since that's all I've been hearing about lately.
I'm sure that'll cause some baseball diehards to ignore this, but I don't think baseball is doing itself any favors right now, so I'll focus on a sport that's actually operating.
I was talking football to a co-worker and the topic of Bills quarterbacks came up. I'm pretty hazy on NFL history, even for my favorite team, and he was trying to remember the names of the Bills QBs between Joe Ferguson's retirement and Jim Kelly's arrival.
He started talking about Joe Dufek, who I don't remember at all, and then he was trying to remember the other barely-there Buffalo QB from that time. "Vince Ferragamo?" I offered. No, it wasn't Vince, he said. He never did figure it out.
I did later. My football cards told me. Cards are good like that. 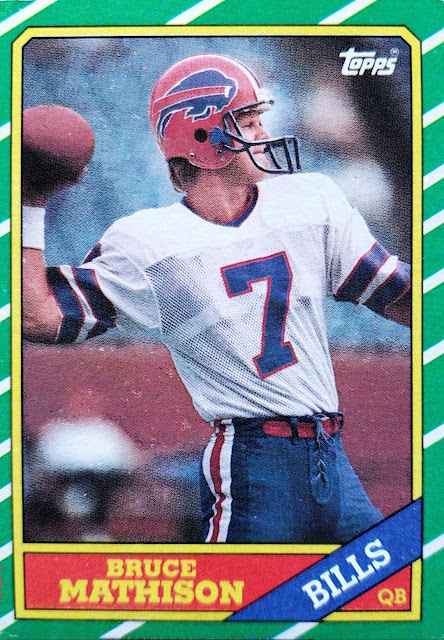 It was Bruce Mathison. He started seven games during the Bills' horrific 2-14 season in 1985. Ferragamo started the other nine games. Mathison was a well-known quarterback for Nebraska in the early 1980s but didn't translate much to the NFL.
That little card discovery caused me to wonder whether I had a card of every Bills quarterback who started the majority of the teams' games each year. I don't have an extensive Bills collection so this little exercise would allow me to figure out who I should add to the collection.
Mathison won't qualify because he was never the primary Bills starter in any single year.
OK, let's get some history on some Buffalo pigskin slingers.
1960: Richie Lucas.
The first quarterback for the Bills. I don't have a card of him but he's gettable, in the 1960, 1961 and 1962 Fleer sets.
1961: Johnny Green.
Again, no card of him but he's in the '62 Fleer set. Speaking of which: 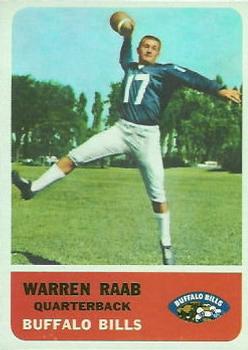 1962: Warren Rabb
I don't have this card. But I really, really need it. Not only is Rabb's little card dance nifty but his name is misspelled. 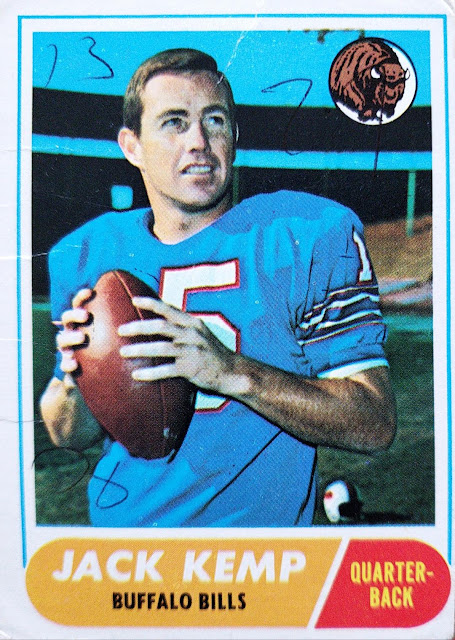 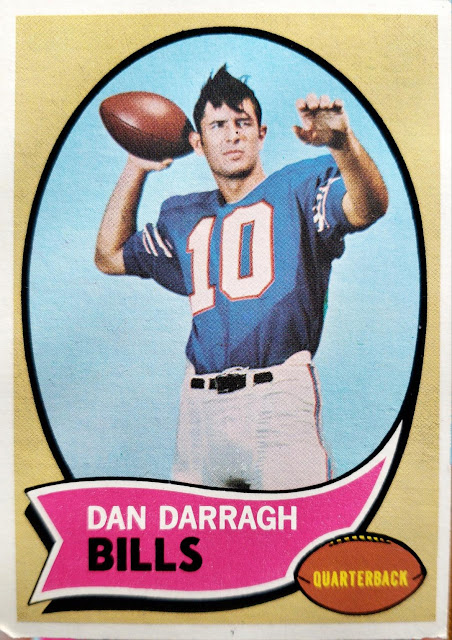 1968: Dan Darragh
I do have this card as well. It just arrived yesterday from Bob. It's in remarkable shape for a 1970 Topps football card. Darragh has the honor of holding the worst total won-loss record for any Bills quarterback in history as Buffalo went 1-12-1 in 1968.
1970-72: Dennis Shaw
I have no cards of Dennis Shaw. This is another quarterback my co-worker was talking about. He's older than me, so he remembered Shaw and I didn't have the vaguest idea. He said Shaw spent most of his time with the Bills flattened by a defensive lineman. 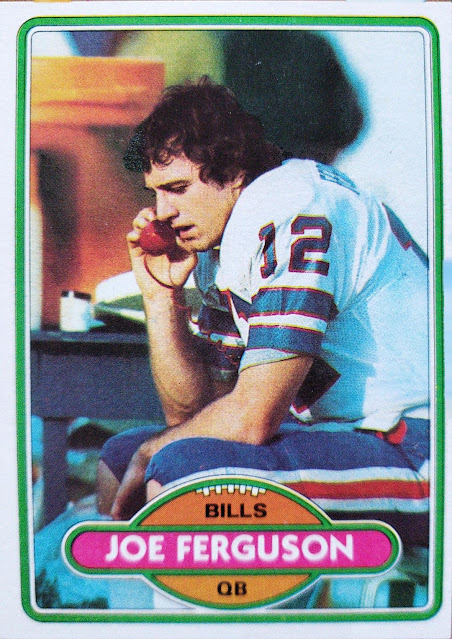 1973-84: Joe Ferguson
This was the Bills quarterback when I first became aware of the Bills. How wonderful is this card? As a baseball fan first, I thought how odd that the Bills had a player with the same name as a player, who I knew much better, on my favorite baseball team.
Also, I've mentioned before that as a youngster I'd make trips to Buffalo to see relatives. I'd read the Buffalo sports sections religiously like a good little future journalist, and I couldn't get over how much was written about the Bills. It didn't matter when I was in Buffalo, summer, spring, fall, there were always Bills stories. Crazy, I thought. Little did I know.
1985: Vince Ferragamo
I do not have a Bills card of Vince Ferragamo because THERE IS NO BILLS CARD OF VINCE FERRAGAMO. At least none that I could find. How could this be? Did Ferragamo refuse to be include in the Topps set because he wanted nothing to do with acknowledging his part in a 2-14 season? Certainly understandable but my quest is now pointless. I want a Bills Vince Ferragamo card! 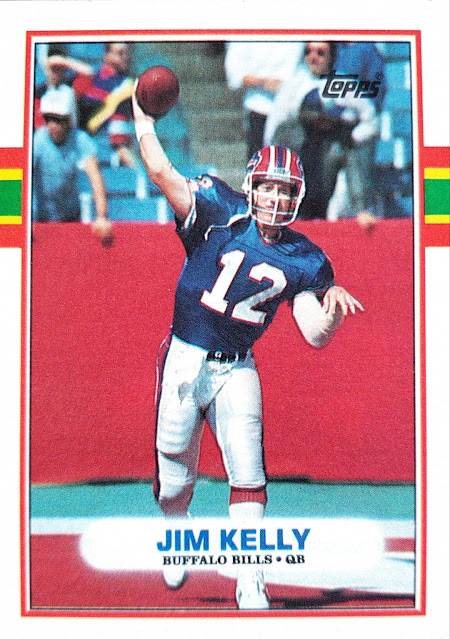 1986-96: Jim Kelly
No problem with finding Jim Kelly cards, in my collection or otherwise. Not only was he the quarterback during the most successful period in Bills history but his career coincided with a boom in football cards.
He remains the only Bills quarterback I have interviewed. 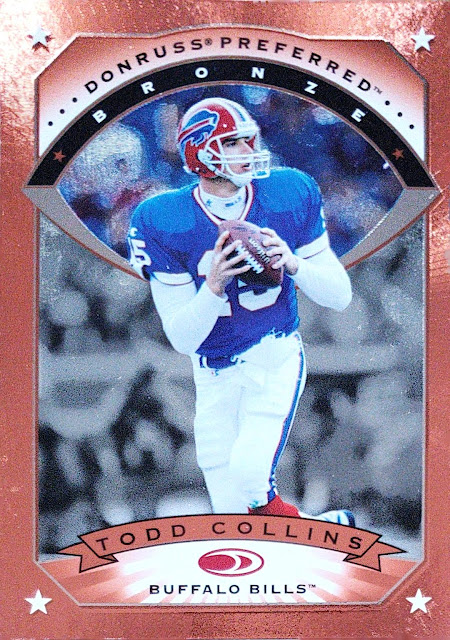 1997: Todd Collins
As Kelly's successor, there was a lot of pressure and a lot of talk. Then the talk disappeared because Collins started just the one season. 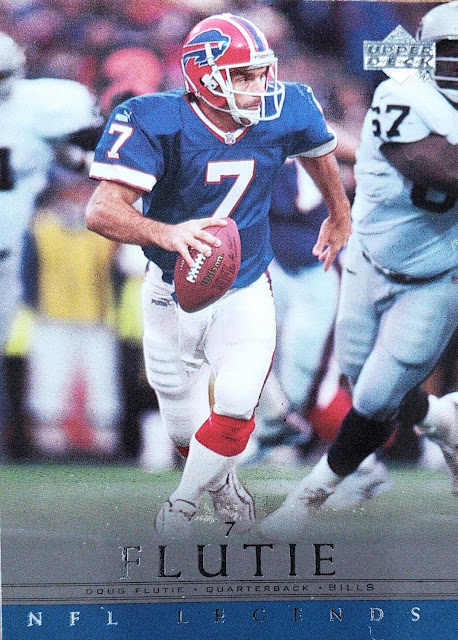 1998-99: Doug Flutie
This was a weird time for the Bills. Buffalo was successful in the late 1990s, reaching the playoffs each year that Flutie started. But you never got the feeling from the coaching staff that Flutie was really the starter. 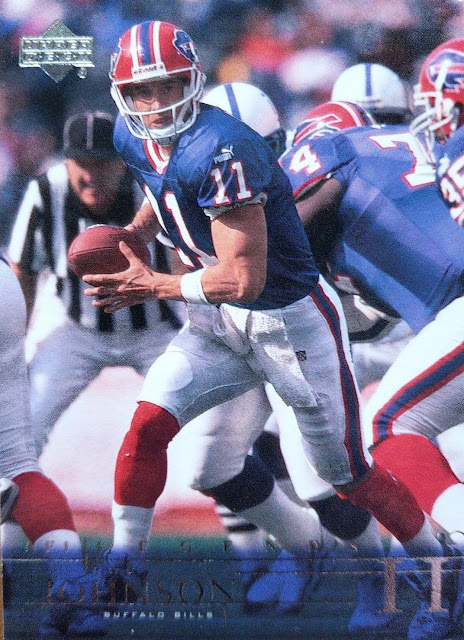 2000: Rob Johnson
This is who the Bills' decision-makers wanted to be the team's starting QB instead of Flutie. Johnson was ... not good.
2001: Alex Van Pelt
I don't have any Van Pelt cards. There are plenty of them. Pretty weird for someone who was the QB of a 3-13 team. 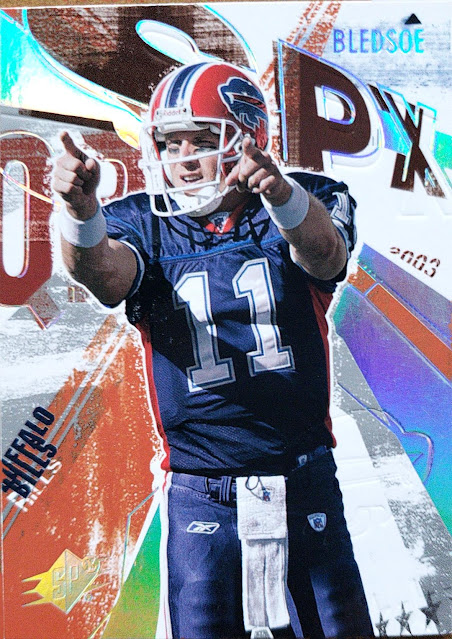 2002-04: Drew Bledsoe
"Holy heck, the Bills are getting Drew Bledsoe???? Sure, I can learn to love a long-time New England Patriots quarterback!" It was totally weird that Bledsoe was playing for the Bills the entire time he was doing it.
2005: Kelly Holcomb
Again, no card of Holcomb, but there are a bunch even though the Bills were 5-11. 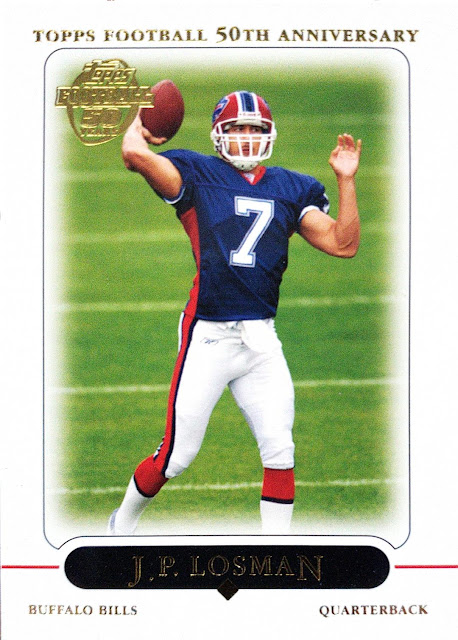 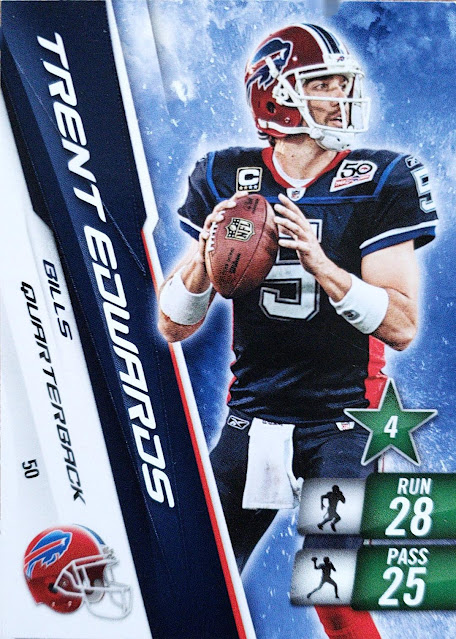 2007-08: Trent Edwards
By this time, I was starting to wonder if the Bills were ever going to have a decent quarterback again. I arrived as a football fan during a time when just two Bills quarterbacks started the vast majority of the team's games between 1973 and 1996 and what the heck was this junk? 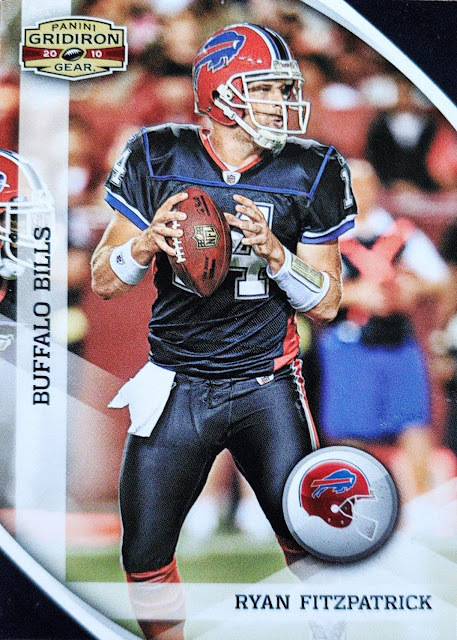 2008-12: Ryan Fitzpatrick
Somehow Fitzpatrick lasted four years as the Bills' primary quarterback even though in those four years the team never won more than six games in any season. Maybe the team was as sick of changing quarterbacks as I was.
2013: E.J. Manuel
I could've sworn I had a card of E.J. Manuel. There's no shortage of them.
2014: Kyle Orton
There are not a lot of Kyle Orton Bills cards. Most of them are high-end stuff, from National Treasures and Inception. 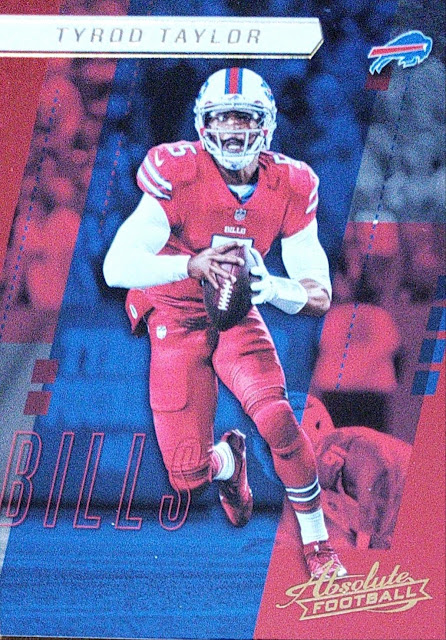 2015-17: Tyrod Taylor
I liked Tyrod Taylor. I thought he was going to die with that offensive line in front of him. But I liked him. 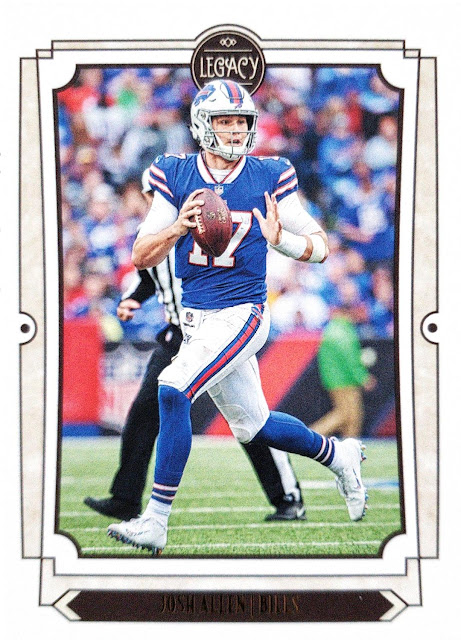 And I really liked Tyrod as well. He may not have been able to rally the team if they were down by 3 scores, but he also wouldn't try to do something stupid if they were up by a couple points.
February 12, 2022 at 7:22 PM

night owl said…
I have Peterman cards (probably thanks to you), but he never got the most starts in any year for the Bills.
February 12, 2022 at 7:33 PM

Cardboard Jones said…
Glad to see some football, as baseball has left a bitter taste in my mouth. I *HEART* the 1968 football design. Hope to one day begin building that set. Dan Darragh...I thought someone had photoshopped a guy from Green Day or some other popular 90s/00s band that I don't follow. Gee, the guy was waaaay ahead of his time when it came to hair fashion. Finally, I remember Rob Johnson was supposed to be the 2nd coming of someone (can't remember the comp) but dude flamed out in both Buffalo and Tampa.
February 12, 2022 at 7:55 PM

Bo said…
That Bruce Mathison card was one of the first football cards I ever had. I recognized the card instantly, but his name didn't ring a bell at all.

That Raab/Rabb is a great early parking lot card.

Old Cards said…
Like the Jack Kemp card. 1963 Topps was the only football set I seriously collected. Had Bart Starr, Jim Brown, Unitas. I know you guys are probably saying, who? Wished I had kept those cards like I did my baseball cards. No Buffalo Bills' cards in the 1963 Topps set, only NFL player cards and CFL (huh?). Fleer covered the AFL which included a card of Kemp which you alluded to. I don't have anything to say about the Bengals and Rams either. Probably won't watch the game. Thanks for posting the old football cards.
February 12, 2022 at 8:37 PM

Jim from Downingtown said…
James Harris began his career with Buffalo, but he was just a backup to Kemp and Shaw.

Fuji said…
I remember when Jack Kemp cards were popular back in the 90's. Always figured it was because he became a politician... but after looking up his stats, he had a pretty solid career as a QB too.
February 12, 2022 at 10:22 PM

steelehere said…
If the Rams win tomorrow, it would be cool if at some point there could be a photo or better yet a trading card of high school teammates Matthew Stafford and Clayton Kershaw showing off their World Series and Super Bowl rings.
February 12, 2022 at 10:39 PM

bryan was here said…
Funny, but I actually remember Ferragamo playing for the Bills. I also remember him playing in the CFL for the Alouettes. That was back when they showed the CFL on ESPN.
February 13, 2022 at 2:53 AM

Billy Kingsley said…
Considering that I don't do football there are a surprisingly high number of names I'm familiar with here, including some I know are in my collection.

gregory said…
When I first saw the title of this post, I thought it was going to be about the Bills announcing a new name for their team. Glad they stuck with "Bills", though.
February 13, 2022 at 8:06 AM

TheGoodMan19 said…
No cards of the Bills first QB, Richie Lucas? I remember all of these guys from Warren Rabb on. Even the "bargain bin" bums from Kelly to Allen (Flutie excepted). Funny, my father used to call Joe Ferguson "the Penguin" because he waddled off the field after every interception. Trying to think of another sports figure with that name.
February 13, 2022 at 12:07 PM