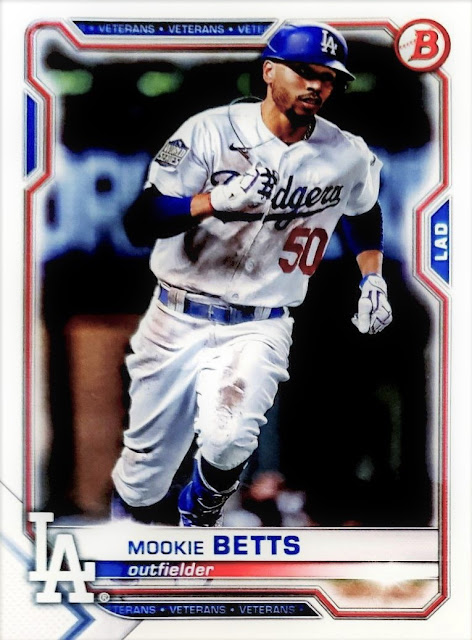 I have mentioned before how it's difficult for me to get interested in cards that were issued 20-80 years before I was born.
My main interest -- as selfish as it may seem -- is mostly the cards that were issued while I was alive. I do leave the light on for cards that came out immediately before I arrived on the earth, stuff from the '50s and early '60s. But even for the early '50s I just can't fully grasp the fascination. I do like early Bowman but there's still something missing for me. And those Topps sets from 1952-55, I'll never enjoy them as much as the stuff that came afterward.
So while you're scratching off that 1933 Goudey or 1922 American Caramel Dodger card on your "send to night owl list" (really, I will take them gladly), here are some cards that I received from three different people that span just about my entire lifetime.
You're going to see all manner of blog photo presentation here because I'm not happy with any of the ways I have to show cards right now. What I want is my scanner to talk to my laptop (the printer does but the scanner does not) because the scanning app is not nearly as clear, the camera doesn't cut it -- especially during this dark, damp, rainy summer -- and none of them crop like my scanner does ... or did.
So, let's start with a couple cards from 1967 sent to me by Dave S.: 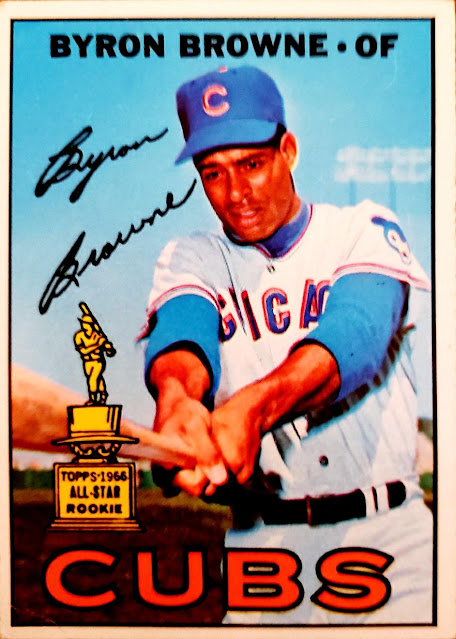 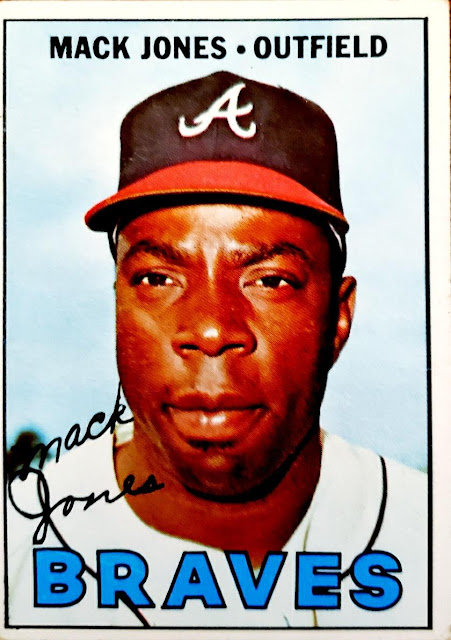 These cards were first issued about two years after I was born (both are from the fourth series). My first memory is as a 2-year-old, looking up at the ceiling after being put down for an afternoon nap in a strange room in a house I didn't know (I think my mom was visiting a friend). 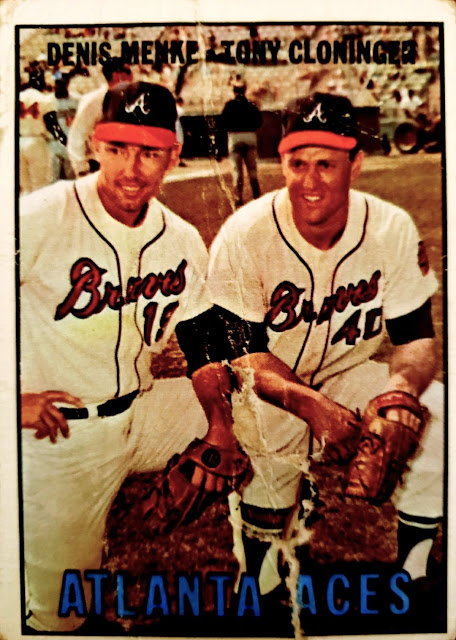 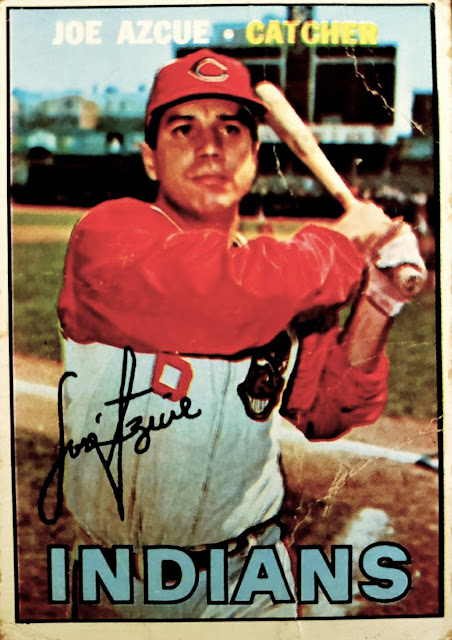 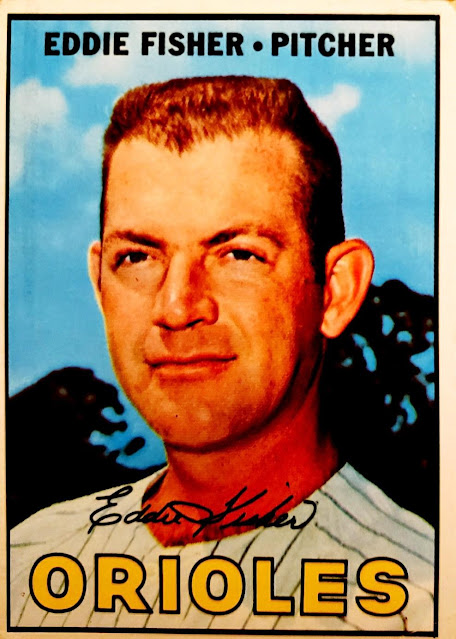 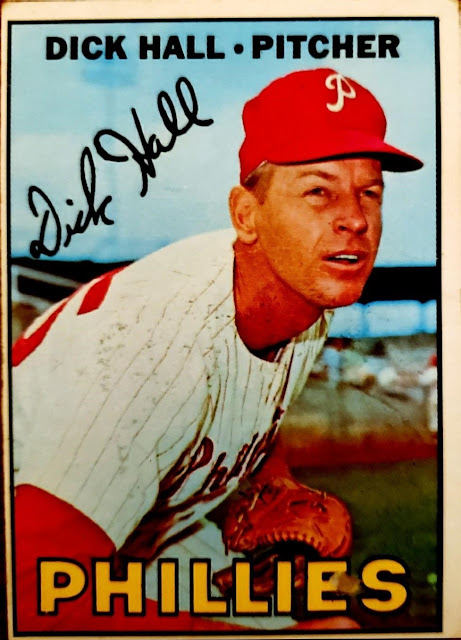 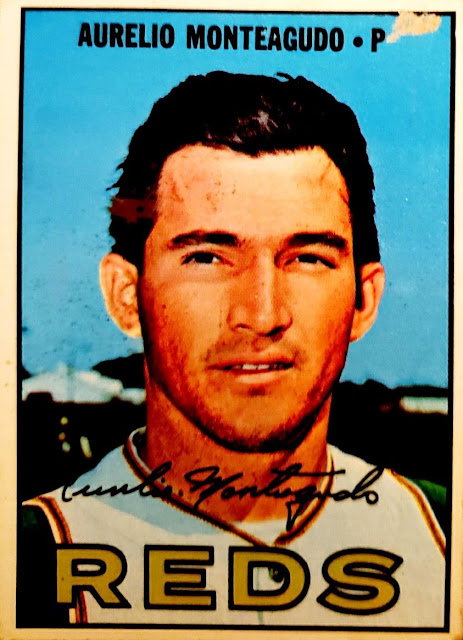 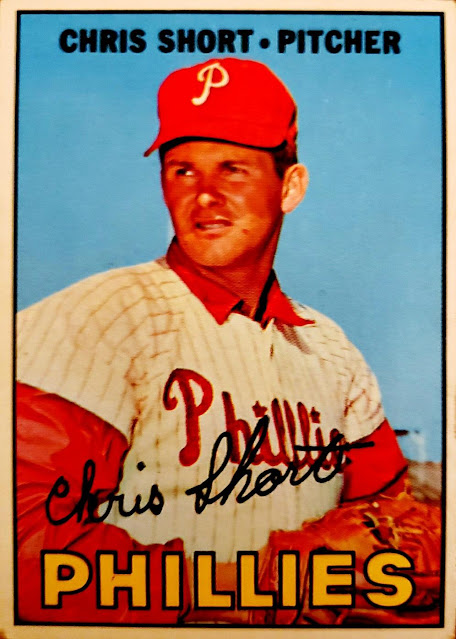 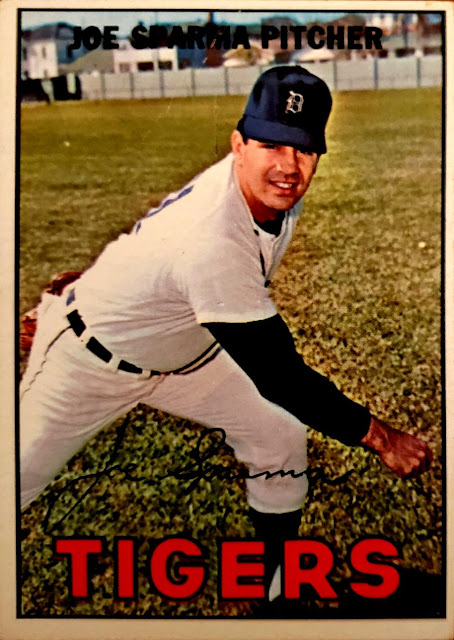 Some more '67s from when I was toddling about. These are all from Bo of Baseball Cards Come To Life!
We engineered another vintage trade, and although I originally requested only the Azcue and Short (I'm really excited for the Short card, which will become clear in a future post), he threw a whole bunch more needs at me.
The Atlanta Aces card, which is full of fascinating background material, seems to have been victimized by the tractor to the right of Cloninger's head. It's creased and half ripped down the middle. But lots of these '67s that I've acquired the last couple of years are working quite well as fillers. I swap them out as I can.

Bo even added a few 1970 Topps needs. I've called these "kindergarten cards" in a past post because that's where I was for the tail-end of 1970. Look at that glorious unchecked checklist.
OK, now let's rocket 18 years forward. 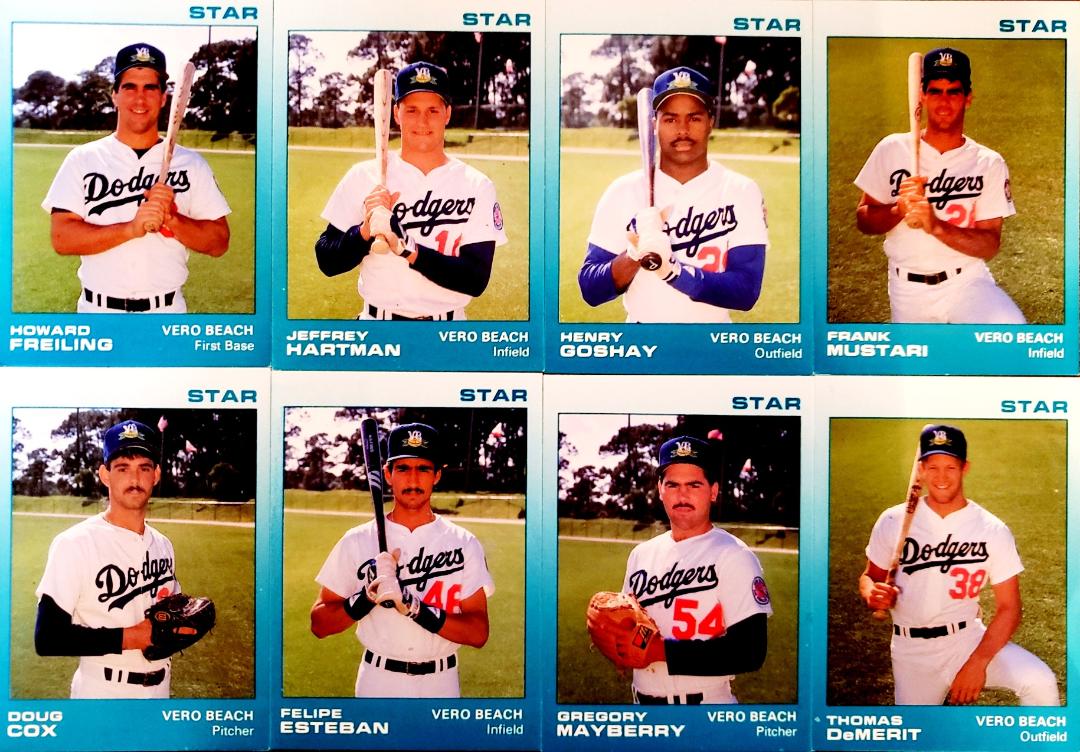 These are also from Dave S., and they seem to be his second batch of Vero Beach Dodgers cards from 1988. I get a kick out of these even though none of them ever reached the majors. Mayberry is the only guy I recognize and that's because I have another minor league card of him.
In 1988, I graduated from college and was just beginning my career as a journalist, working an internship at a nearby paper, which became a part-time job in the sports department that same year. It's also the first full-year going out with who would become my wife. They don't make years like 1988 anymore.
OK, hold on again, we're hurtling 33 years forward to the present and something called 2021 and something called baseball cards in 2021. 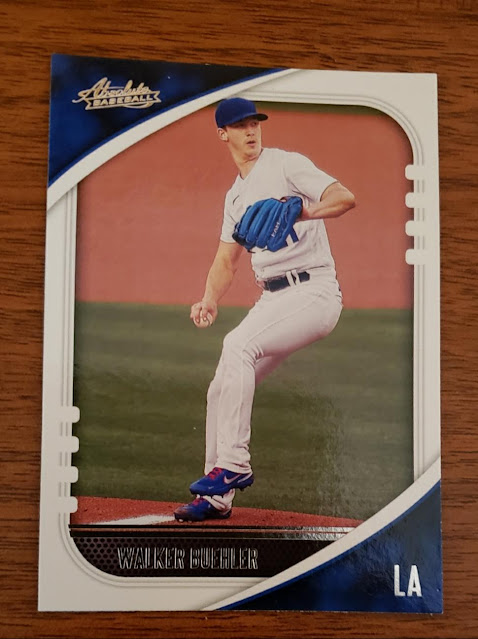 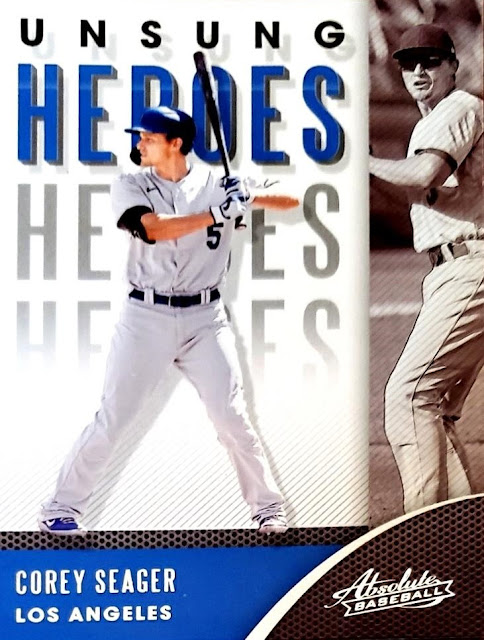 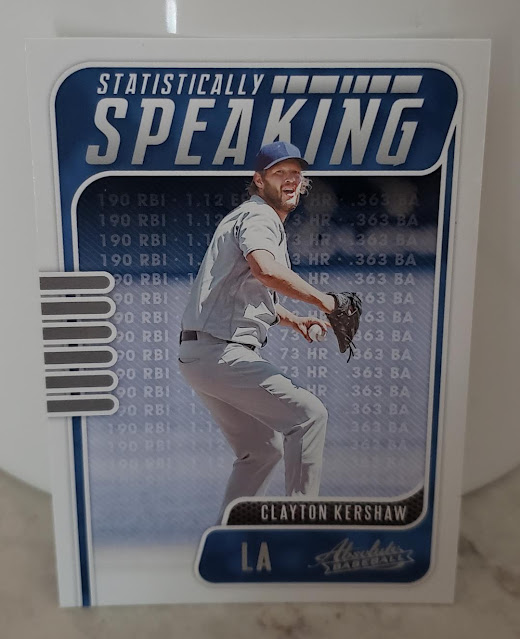 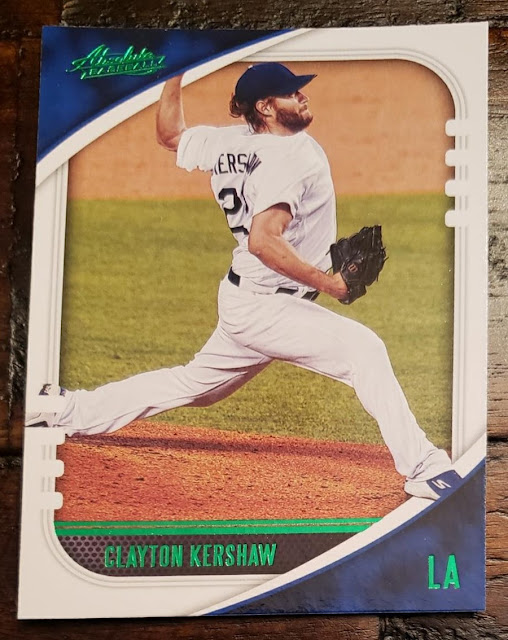 I probably should have cropped that Buehler card before uploading, huh? I'm telling you, I'll so discombobulated about how I should present this stuff.
These are my first look at Panini Absolute from this year. I received these from Joe, who used to blog but I have reconnected with on Twitter and we've been exchanging cards like the old days.
The cards are Panini, so they aren't great, but they're a little fancy, which is nice. Panini has more inserts than even Topps, I think, and it places about as much thought into them as Topps does. The Panini Absolute ones are practically all one word -- "Power," "Prospects," "Icons," -- and they're vague enough so Panini can squeeze any player it wants into them.
I do like the look of the Unsung Heroes insert though -- I'm a sucker for large type fonts with players superimposed over them.
So, unlike 1967 and 1970 and 1988, you know what I'm doing here in 2021. I'm writing about baseball cards and trying to navigate this weird version of the hobby and baseball in the 21st century.
For example, three more cards from Joe, these from 2021 Diamond Kings: 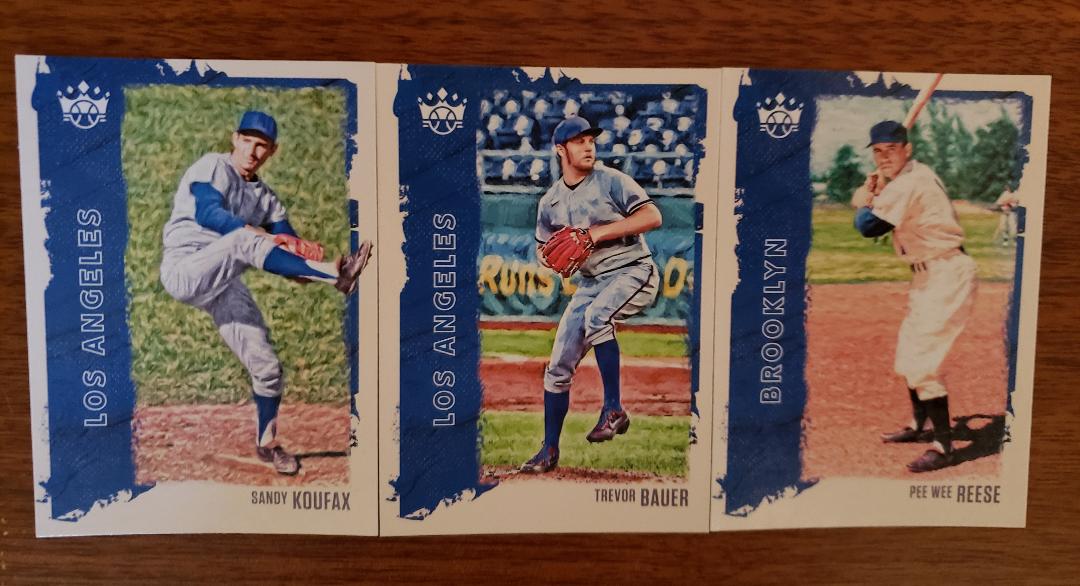 Tell me which one doesn't belong.
This illustrates better than perhaps anything else:
1. Why it's so weird to mix legends with current players in a set.
2. Why I am not primarily a player collector.
The less said about Bauer these days the better, but the card serves as a teaching lesson for modern collectors. If I was unfortunate enough to sink my collecting money into a Bauer player collection, I would've probably burned all my cards by now.
But since I am a team collector and am mainly interested in collecting cards that represent my team that particular year, I have no problem with a Bauer card or two, he did pitch for the team.
But putting him with Koufax and Reese in the same set will never not be weird and I will always consider those sets strange, even though companies have been creating sets like this for a long time.
That's collecting in 2021 and what I'm doing at this period in my life.
These are the cards I'm interested in, for better or worse, because these are the years that I know. Will I ever get around to collecting pre-war or, say, try to complete the 1953 Bowman set? I doubt it.
But you can always send me one of those cards and see if you can change my mind. 😏

POISON75 said…
Mr. Owl:
Just wanted to give you an update on my progress of the 1967 set I'm working on I now just need of the following mind you that is not counting the Variants still.

I am heading home tomorrow night after attending the National Sports Card Convention hopefully I can find a great deal on the Robinson how close are you on yours.
July 30, 2021 at 1:09 AM

Fuji said…
I understand your interest in collecting cards issued during your lifetime. I'm the same way. In fact, I'll take it another step. My main interest is cards from my youth when interest in baseball and statistics were at its peak for me. I do enjoy collecting modern baseball cards too, but if I ever had to pick an era... it'd be the 80's. As for cards created before I was born, I have a deep appreciate for them. I just don't actively chase them nearly as much.
July 30, 2021 at 10:44 AM

cardstacks said…
I feel the same way. It's hard for me to connect with the players and cards from before my time, which makes sense. Even if the cards are pretty iconic and important to the history of the sport, I haven't necessarily searched out those types of cards.
July 30, 2021 at 4:55 PM

Jon said…
I'm sure glad I don't stick to cards that have only been produced during my lifetime, as that would make for a pretty uninteresting collection.
July 31, 2021 at 8:24 AM