I can tell there was a card show somewhere 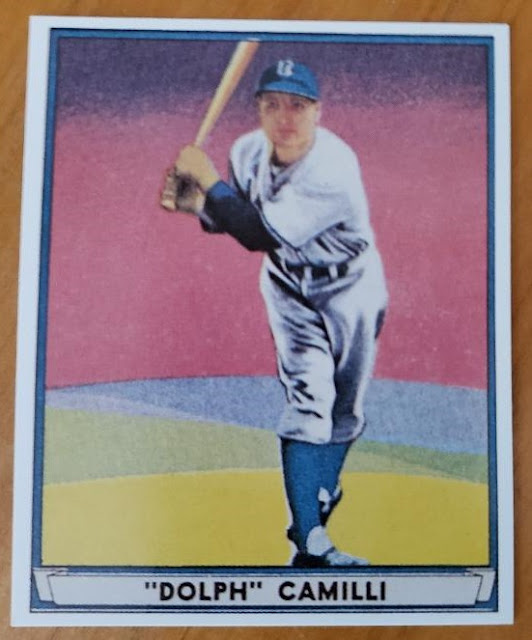 Early last week there were air quality warnings on the east coast. Winds had blown wildfire smoke from California across the continent creating a haze in the sky. I was traveling Monday and all I saw on my trip were dusty skies.
Even before I knew it was related to wildfires, I knew something was up.
And so it is with the return of card shows. I know they are happening somewhere. They're not here yet -- or at least not any that I can get to -- but some of the goods from those shows have floated across the continent to my nest.
After a long absence, card shows have been popping up everywhere. One even showed up an hour away but the timing was bad. There's one in September hopefully I can attend.
Meanwhile I watch from afar (that National thing is happening again at the end of this week) and praise the card winds that blew some card show scraps toward me. Why several days ago, I looked to the sky and there were some card show remnants from Nick of Dime Boxes! (At least I assume that these came from a show).
Nick is good at seeking out cards to my tastes and it was a varied envelope because my interests are, too. 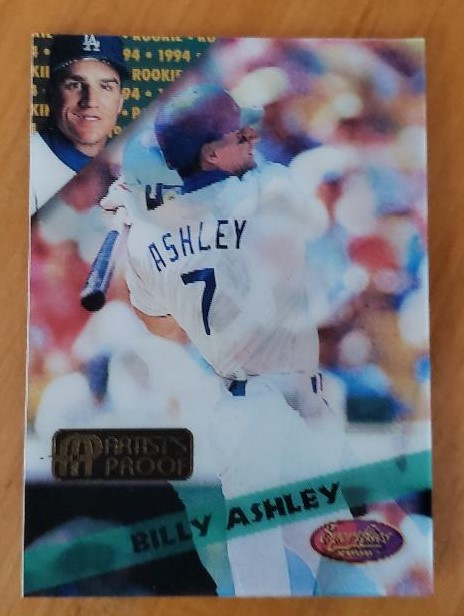 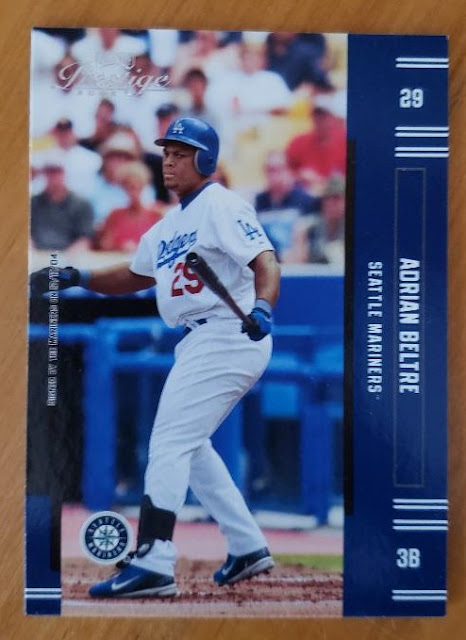 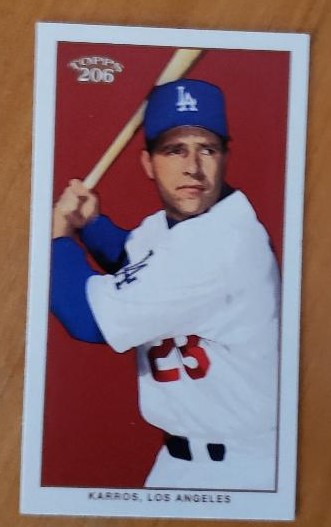 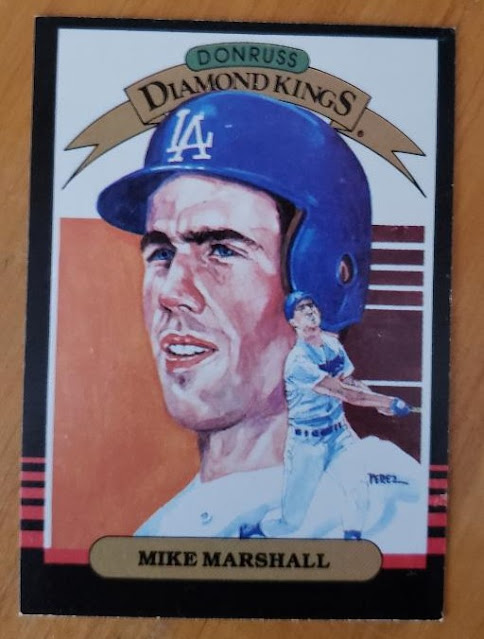 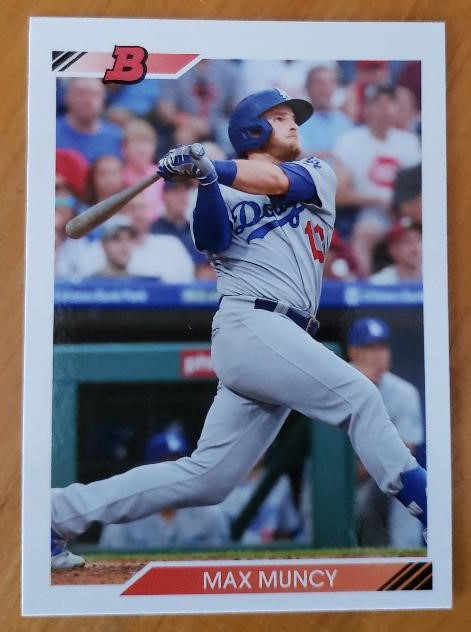 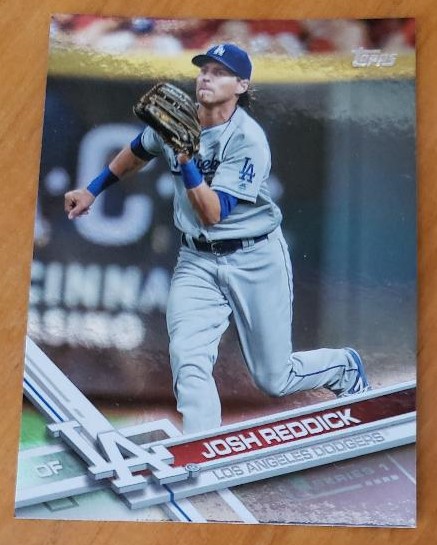 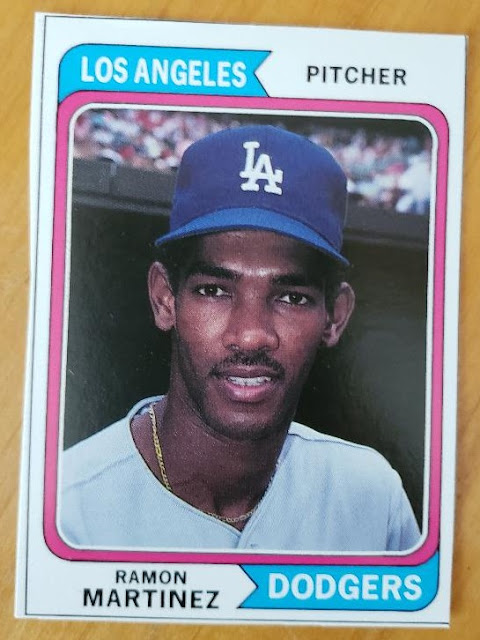 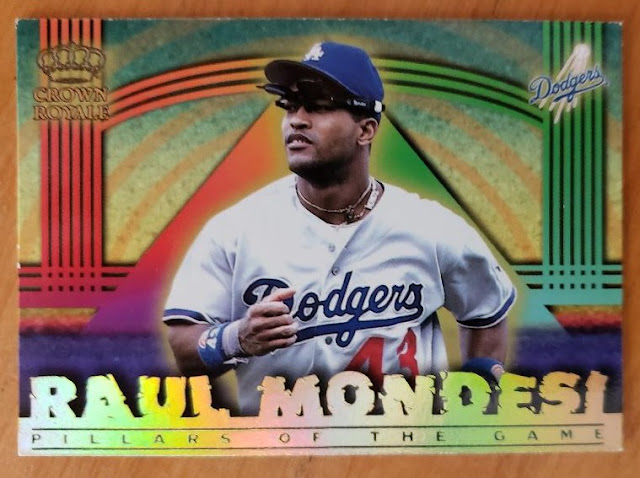 This Mondesi Pacific card from 1999 gets singled out because it features every color of the rainbow, which is something every card should put on its goals list. 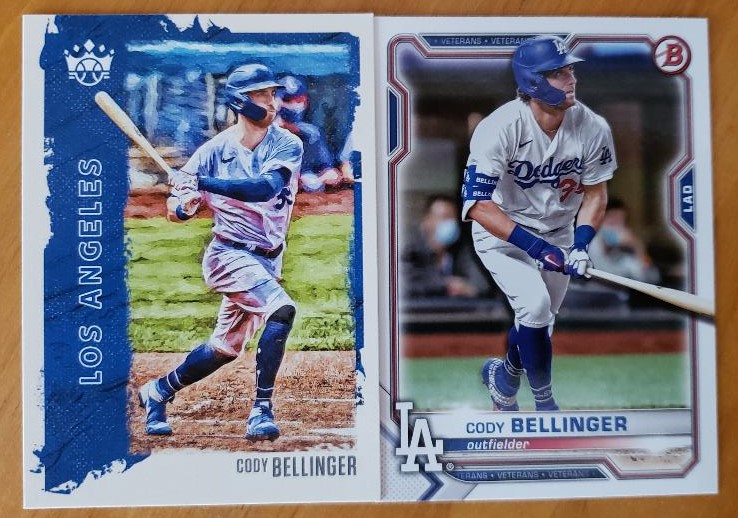 When I see Cody Bellinger attempting to hit these days, the thought that I've had many times springs to mind -- why are there designated hitters for only pitchers? What if the pitcher is hitting fine but some outfielder has completely lost his way, why can't you DH for him? If we're going to let the DH in the game anyway, might as well go full slo-pitch rules and make it work for teams. 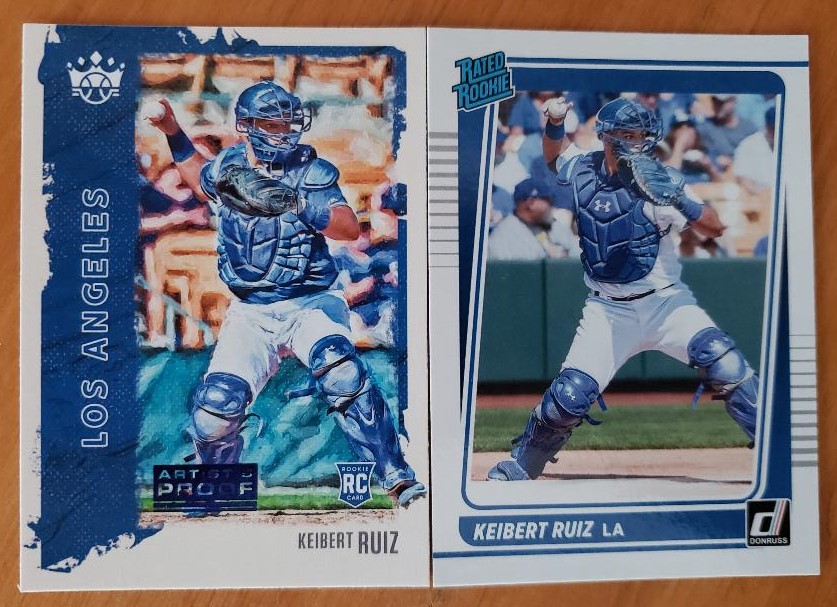 There's Panini working real hard with photo choices. And one's an AP, so now I'm going to have to get another card of Ruiz doing the exact same thing. 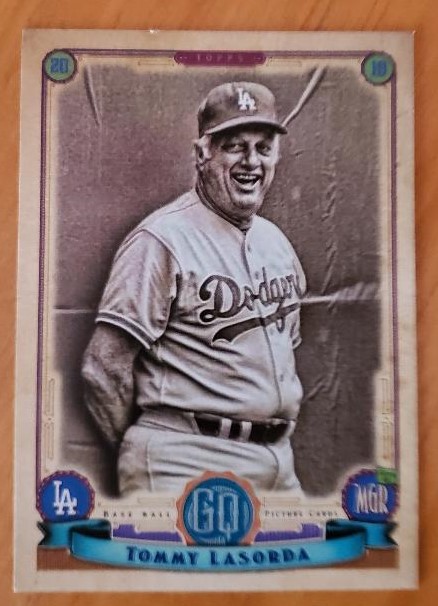 Woo! A Gypsy Queen short-print! GQs are the rarest of short-prints in my collection because I absolutely refuse to chase hard-to-find cards that are ugly, too. 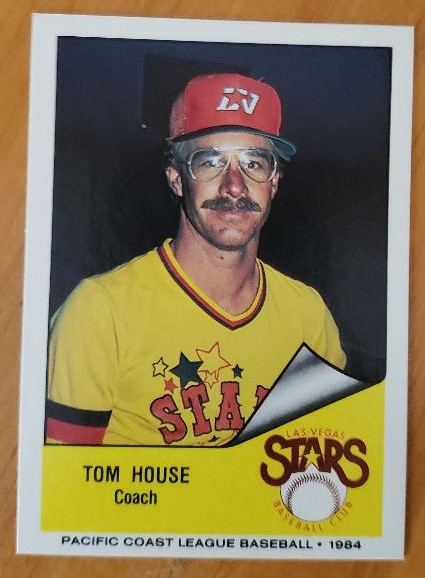 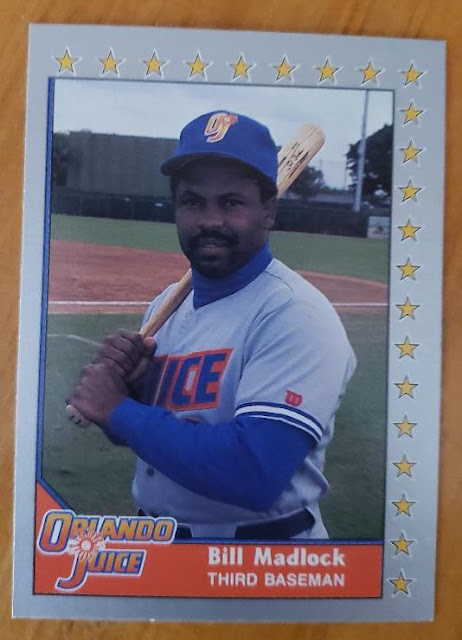 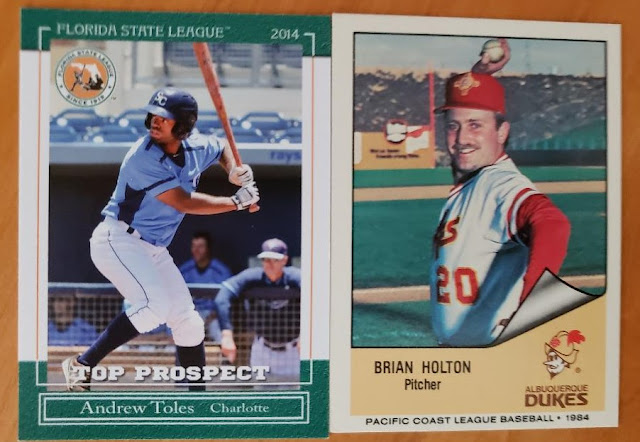 Both Nick and I are oddball fans and we don't restrict our fascination to MLB-issued cards. When I see known players on unfamiliar cards or in unfamiliar uniforms, my collecting heart skips a happy beat. 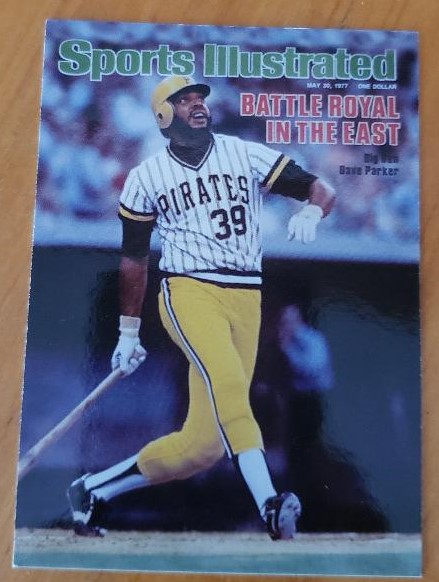 Here is another thing that Nick and I like, "magazine cover" cards. I remember this issue of Sports Illustrated coming to my house back in the late '70s (my first subscription to SI lasted from the spring of '76 to the spring of '77).
The late '90s Fleer SI covers set is so fantastic that it's been on my "too complete someday" list for a long time. I'll get to it. But I don't need the Parker anymore. 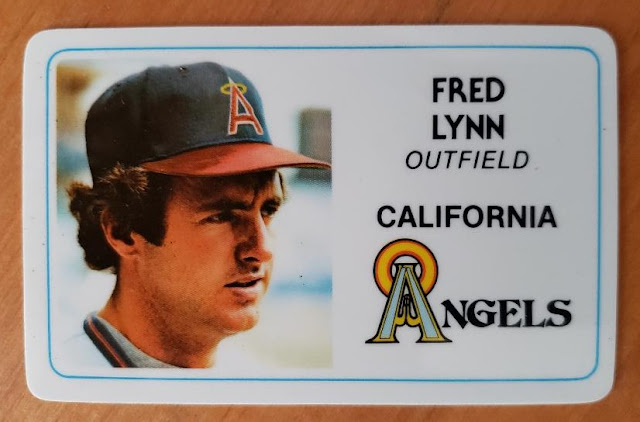 Here is another set featuring players from my childhood that I need to complete. All of the early '80s Permagraphics sets are great but the first one, from 1980, is the best and I will finish it someday. (My guess is you can find the whole set fairly cheap). 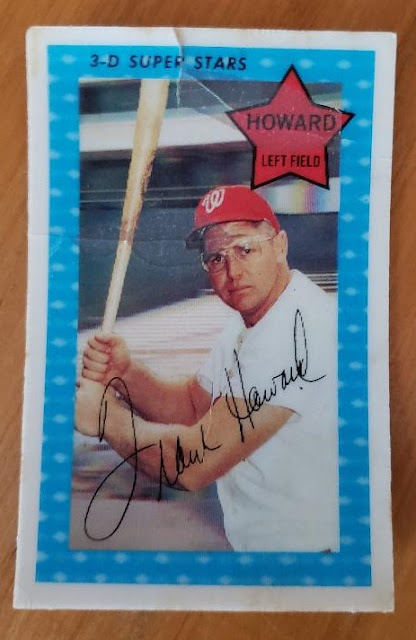 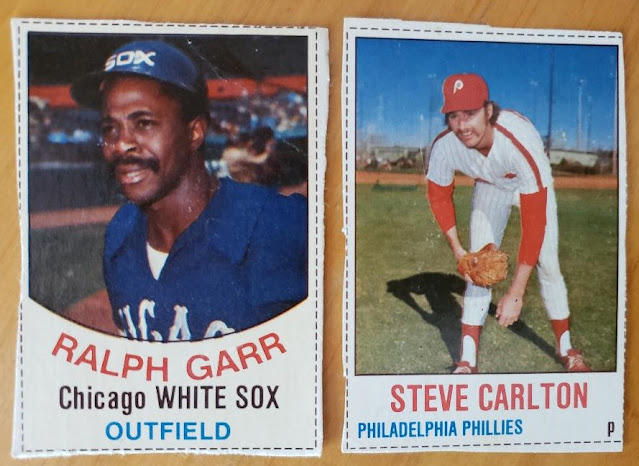 OK, here are a few sets that I am already on the record as collecting. I'm especially happy about the two Hostess cards. I seem to have switched over from Kellogg's to Hostess collecting on my priority list lately. But I'm sure I'll flip over to Kellogg's again. 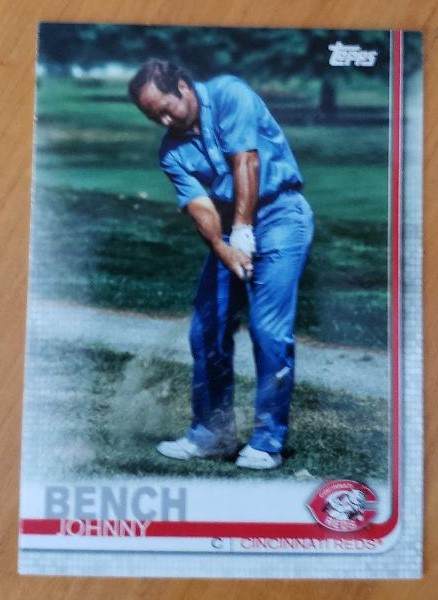 Finally, how about a 2019 SP of Johnny Bench golfing? Stuff like this never stays in my collection because I'm always trading it away to someone who wants it more. Maybe I'll keep this around though. It's pretty handsome even if my snapshot is blurry.
So that's my taste of card shows opening up around the country (just not here). I hear they're spreading like wildfires!
Enjoy! And think of those collectors in the distant outposts. Thanks, Nick.

Nick said…
You're very welcome! Most of these did indeed come from card shows/flea markets around here & I'm just happy I was finally able to bolster my Dodgers trade stacks up to the point where I could start sending halfway decent packages again. Figured you'd get a kick out of the Bench - I somehow lucked into having two copies of that one. I'll be on the hunt for more Dodgers & fun randoms at The National!
July 25, 2021 at 6:32 PM

Chris said…
Great to see some bloggers shopping at card shows, and thinking of those who can't. That Tom House card was alarming to see among all the shiny modern Dodgers. And the Bench golf SP is fantastic, too.
July 25, 2021 at 6:32 PM

Zippy Zappy said…
Man those Ruiz cards are hideous. It's a shame since catchers in full gear are usually a good way for Panini to get around the lack of licenses in a way that could offer a visually appealing product but those look ugly af.
July 25, 2021 at 6:36 PM

To play "Panini's Advocate", catchers in full gear are ideal because little to no photoshopping is required.

Lately I've become intrigued by those Cramer PCL cards... I'll get a couple in my hands this fall when my COMC shipment finally arrives
July 25, 2021 at 7:36 PM

It's Me, It's Me, It's Robert C! said…
Not sure you'll see this but here it goes. I discovered this blog about three months ago, and I’d like to simply say thank you. You’ve made me feel good about my collecting again. I had fallen into the trap of thinking every card I bought needed to be significant in some way or at a certain price level. I’m not sure where such ideas came from? Once again, I am enjoying collecting cards from my youth such as Hostess, various 80s issues, and now I have discovered the Fleer SI issues, thanks to you. All fun, affordable options. I’ve also had a blast with Baseball Card Store and it’s 10 cent cards! Thank you so much!
July 26, 2021 at 8:30 PM

Fuji said…
Nick hooked it up. Great variety of oddball stuff from the Permagraphics to the magazine card of Ramon.
July 27, 2021 at 12:48 AM

Jon said…
If things keep going the way they've been going card-wise, one would have to think that more shows might start popping up in your neck of the woods, I mean they certainly are everywhere else!
July 28, 2021 at 8:31 AM