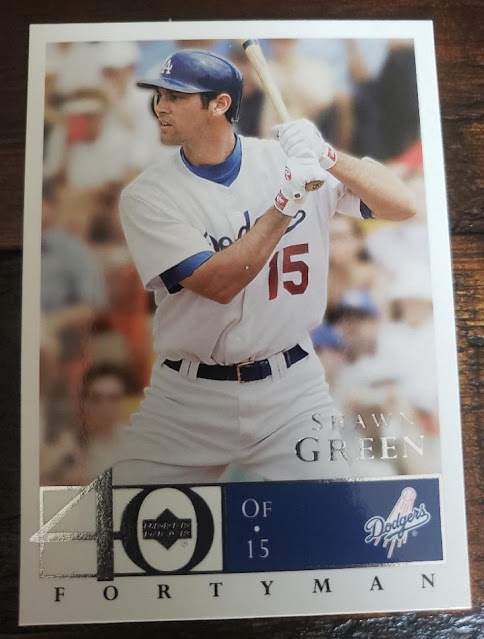 I just got back from a weekend away and there were some overstuffed card packages waiting for me.
I barely had the energy to open them, and probably should've waited for when I could appreciate them more. But that's what the blog post is for 8 days from now.
Meanwhile, I'm really tired. I don't sleep in other beds beside my own very well anymore. And long drives wear me out, too. It's amazing how you lose your adaptability as you get older.
I do need to post some cards though because I'm looking to update my Dodgers binders right now, which is a two-times-a-year occurrence. And I've landed so many Dodgers cards lately. 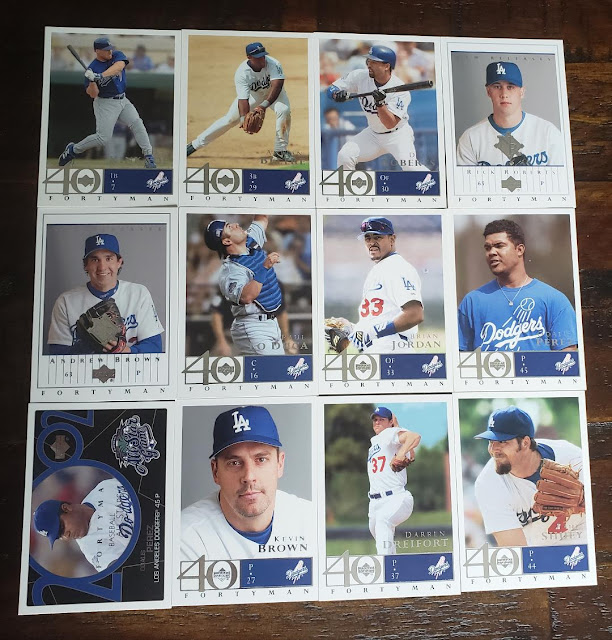 Such as.
I've mentioned before how much I like the 2003 Upper Deck 40-man set. Topps Total is the poor man's 40-man.
I decided to finish off the Dodgers in the set once-and-for-all. So Sportlots got me all of the ones that I need. There's one last card remaining -- Paul Quantrill -- one seller is being pokey.
But, like I said, those binders are waiting for updates. Can't sit around for Paul. 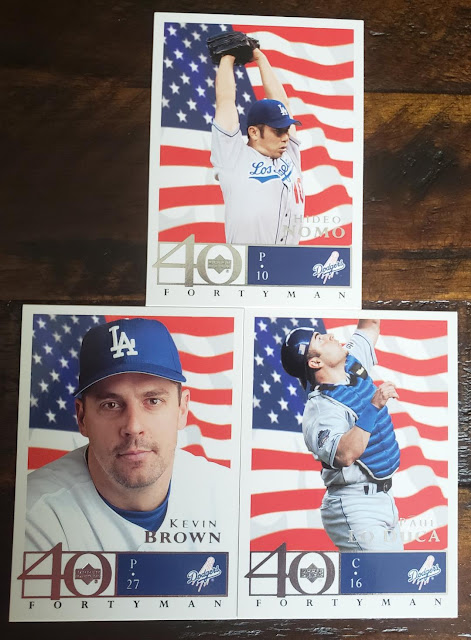 I also added three more of the 40-man flag parallels. Kevin Brown looks goofy but the others are cool. 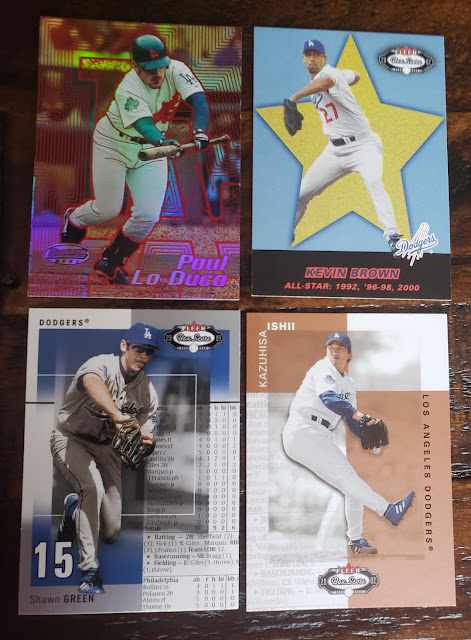 Here are some 2002 and 2003 Dodgers needs. I'm blaming Nachos Grande for these purchases. He's always opening product from around this time with his group breaks. I see the non-Dodgers that are pulled and I get jealous, so I go out and get the Dodgers.
By the way that red Lo Duca Bowman's Best card is one of the ugliest parallels ever (I have the blue one, too, and it's not any better). 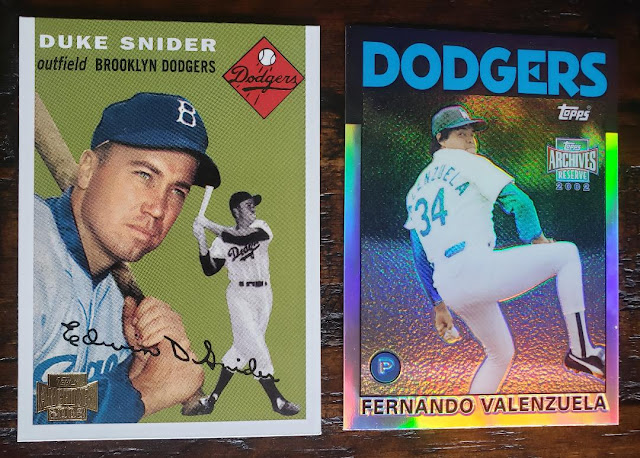 A couple more early-aughts needs from Archives. I'm just about done with 2002 Archives now. 2001 is a whole other matter. 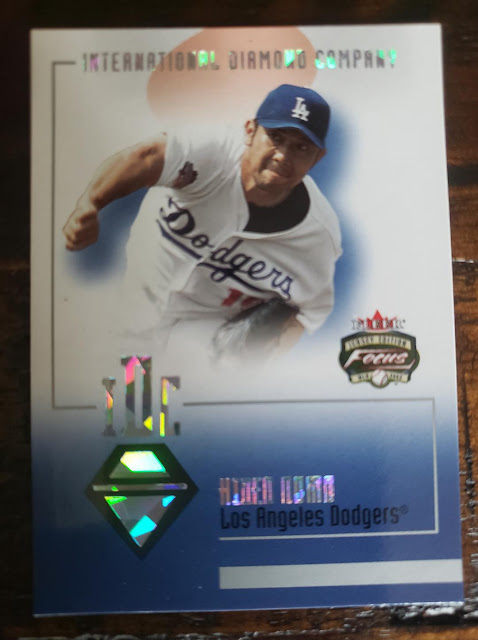 I am too zonked to figure out how to photograph these cards straight. This is another card purchased in a jealous rage after seeing another one pulled by Nachos. I don't even really remember what it is anymore and certainly am not going to look it up right now. But it's shiny. 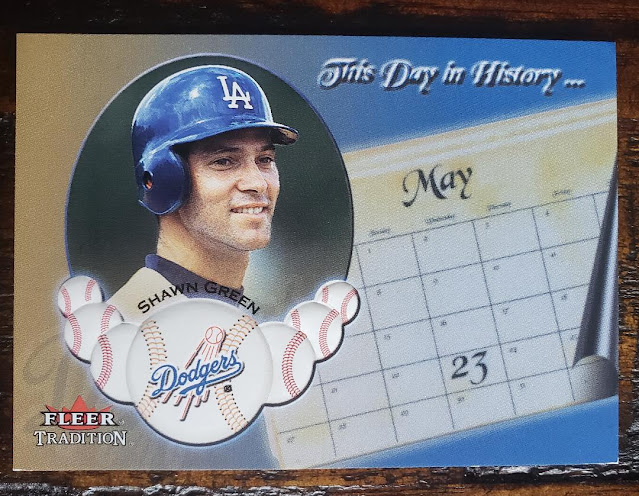 Same deal with this card. Nachos pulled some non-Dodger one of these, we all oohed and aahed, and I went right out and found the Dodger version. 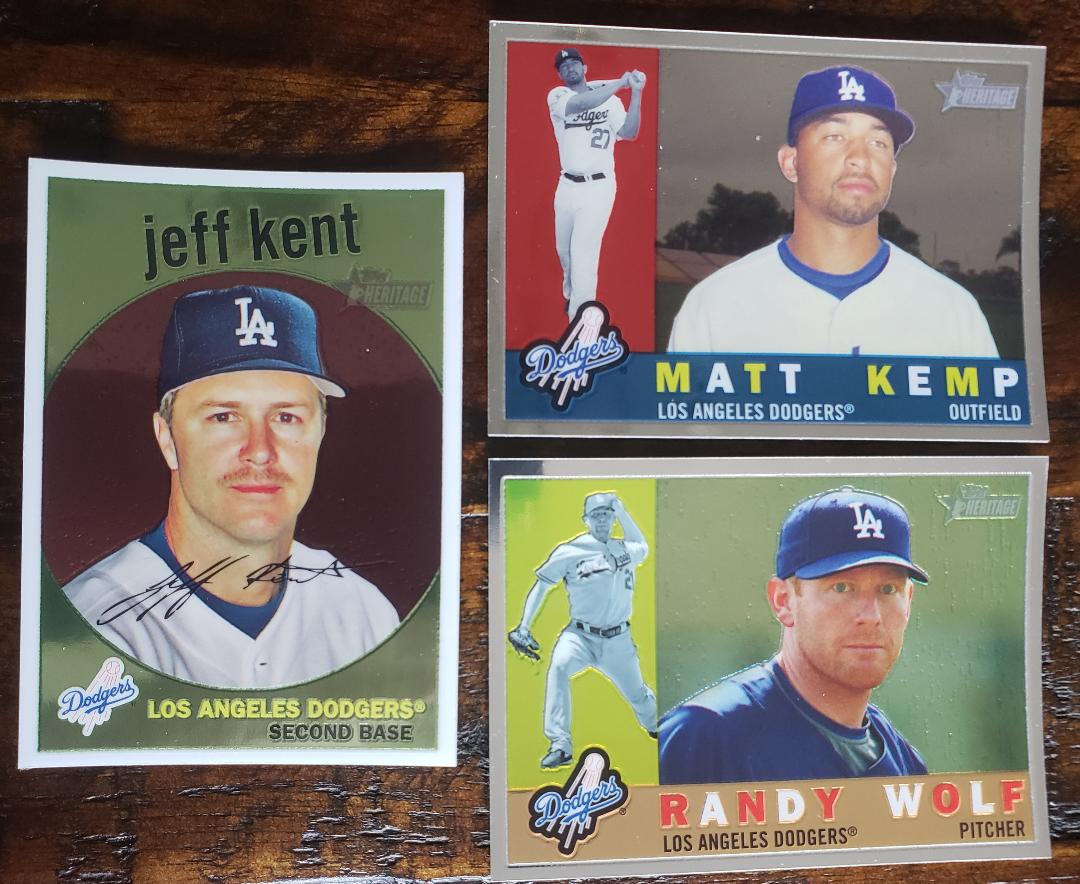 I don't have an explanation for these other than that I needed them. I probably got into a whole separate "I DON'T HAVE THESE" yank and now here they are. That's about the only way a Jeff Kent card from 13 years ago is getting here now. 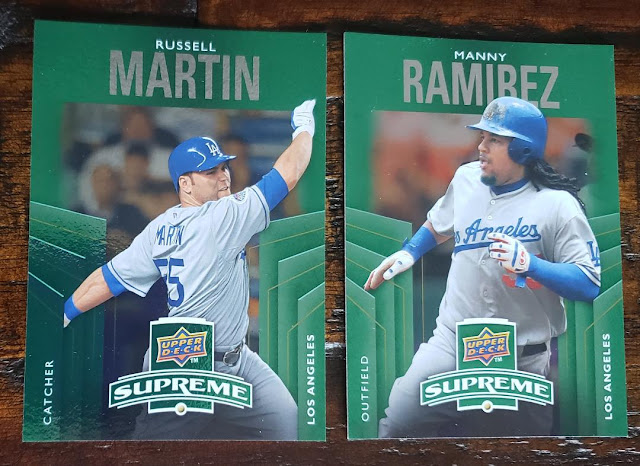 These came out in 2010 when Upper Deck was dying as a baseball card company. I never saw them and didn't know they existed until the Matt Kemp card came my way not too long ago. There are blue versions, too. 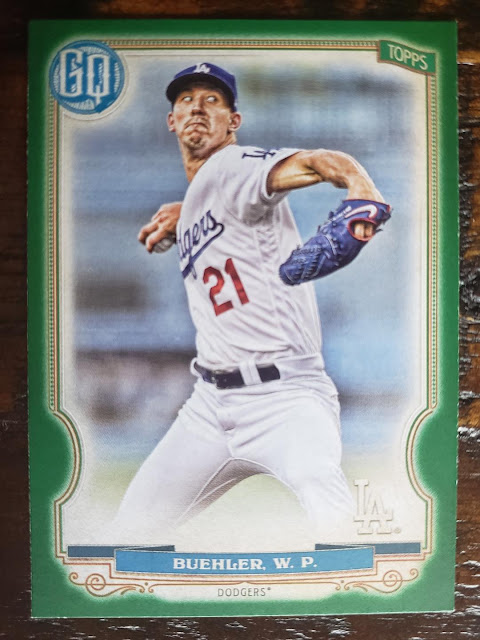 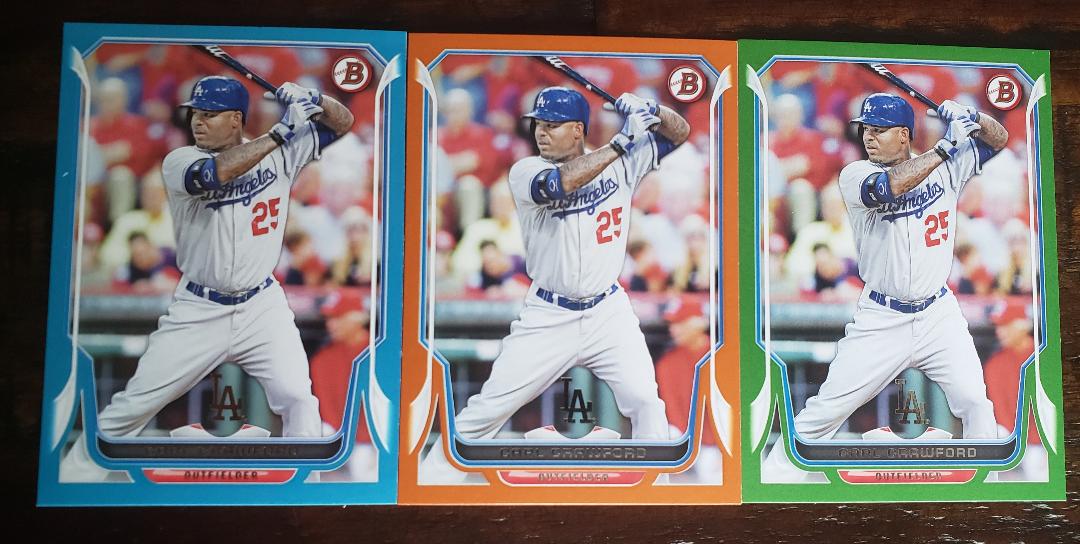 Still a big-time sucker for parallels. I can explain the Crawford by saying I wanted to see how easily I could get multiple parallels for a player that no one collects anymore. Crawford showed me I could get as far as the numbered-to-150 green. 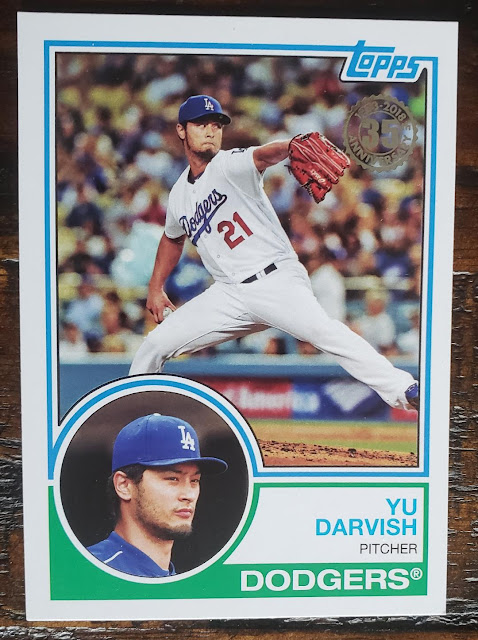 This finishes off the Dodgers 1983 inserts from 2018. Yeah, I still need to work on the All-Star cards but let me celebrate my small victory. 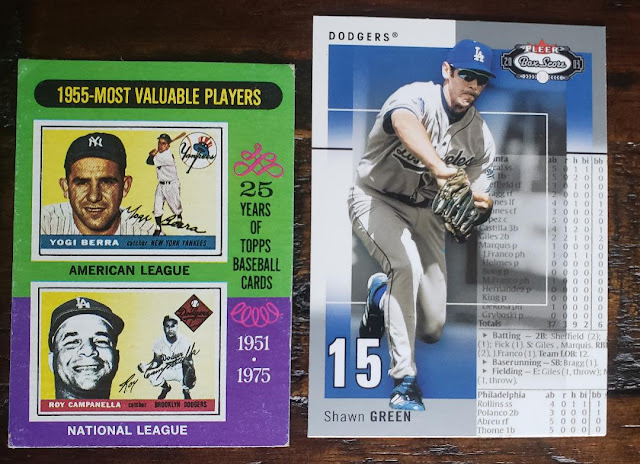 And on the topic of small victories, I finally picked up the '75 mini of the 1955 MVPs for my Dodgers set, it took me years to do this. I put it next to the Boxscore card to show that it was a mini, but now I'm realizing that 2003 Boxscore had minis, too, so maybe this is the Boxscore mini and the '75 card is some sort of freak mini mini that has only been unearthed just recently throwing the hobby world into a frenzy.
OK, don't pay attention to me, I'm delirious. There's no such thing as a '75 mini mini. 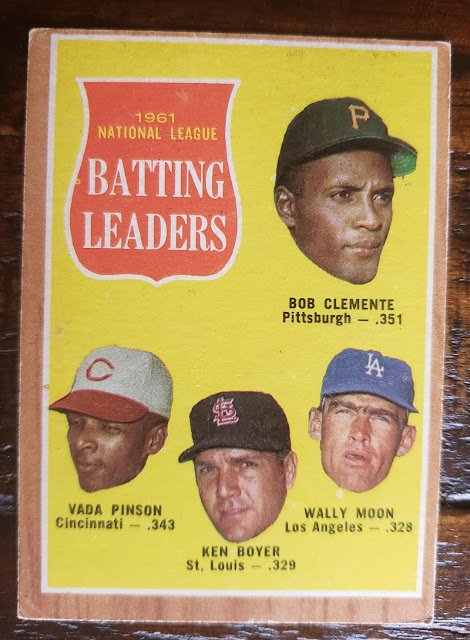 Final card. I saw this card somewhere and spotted the Wally Moon right away and knew I didn't have it.  I didn't even pay attention to the Clemente. I went right out to add one to my collection. I shouldn't have found anything cheap, given the Clemente, but I did and now it's mine. And that's why I say, ignore the Clemente, maybe you'll find a good deal.
OK, so that's a bunch of Dodger I got recently that I'm throwing into my binders shortly.
Oh ... 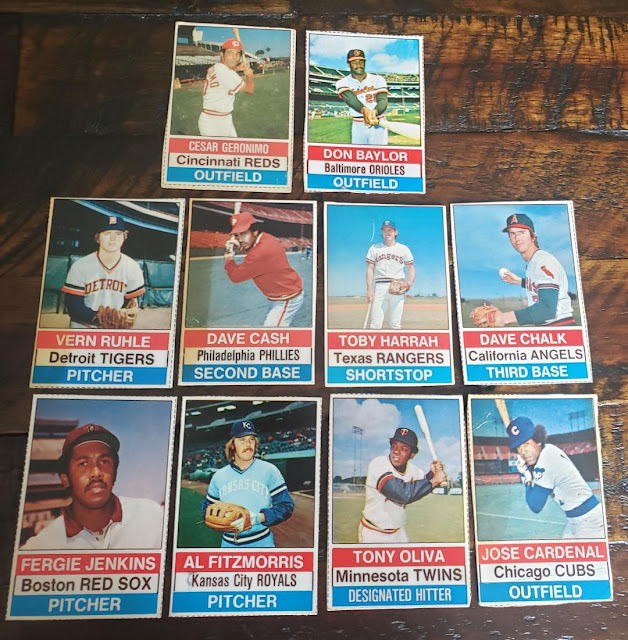 Fuji said…
A. I have difficulty sleeping outside of my own bed too.

B. Took my nephew and his girlfriend on a day trip down to San Luis Obispo (about 3 hours away) for some delicious eats and bonding time. It was a lot of fun... but I was exhausted by the time we got back into town.

Doc Samson said…
I always liked UD 40-Man and Topps Total. They were a great idea for a baseball card set by being so comprehensive. Heck, I even think that 2004 Topps Total was one the best designs by any company during that decade. Mr. Owl, you, like any other owl, need to get your sleep so you can be well-rested for your hunt for Dodgers.
July 20, 2021 at 4:46 PM