Not as enjoyable as I remembered 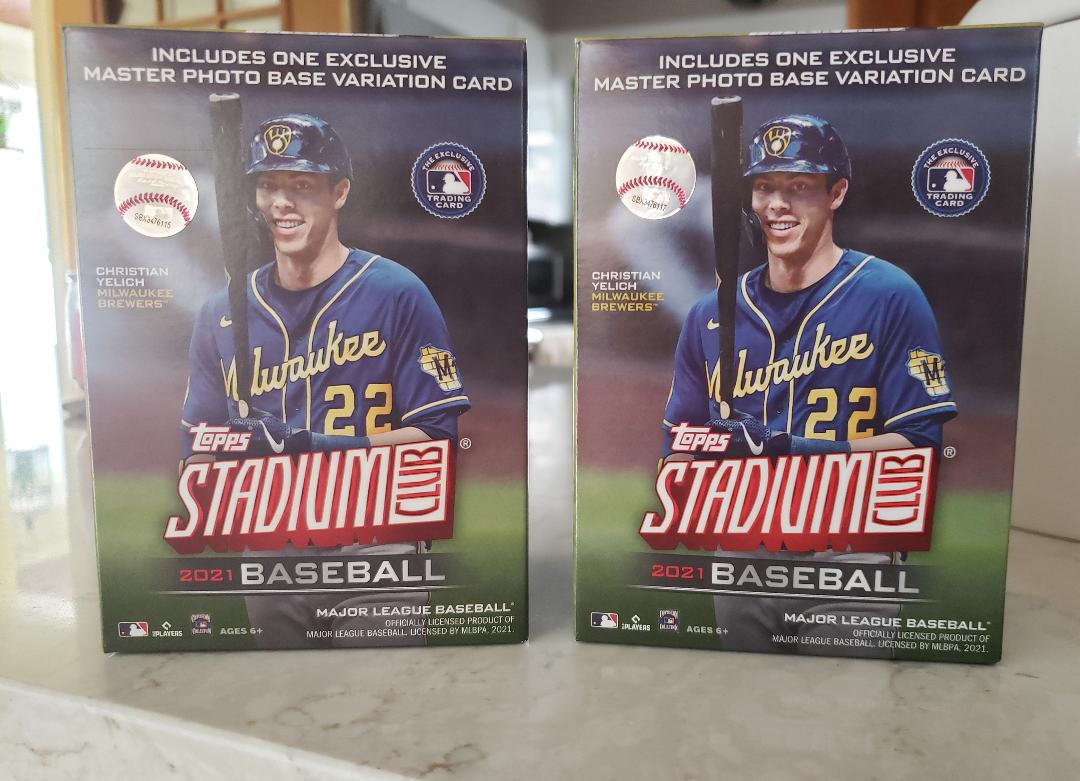 I watch a fair amount of record album reviews. There is a common sentiment among reviewers when they come across double albums. Many times they say, "if they took out all of the filler, this would make a nice single album."
Welcome to my two blasters of 2021 Stadium Club.
These weren't as fun as I remembered. Don't get me wrong, I liked opening them. They didn't cost me anything, they were gift-card birthday purchases. And Stadium Club is about as entertaining as current cards get.
But after a year-plus of tracking down and buying only cards that I want, getting extra Marlins and White Sox and an overabundance of Yankees is even less amusing than ever. And, no, I don't want to take the time to list them on some trading site either.
By the time I went through the 82 cards that comprise two boxes of this year's Stadium Club, I had about one box worth of cards I either want to keep or can/will trade. Because of this (and other reasons), I don't have the patience to show off each card in the exact order I pulled them as I've done many times in the past.
You'll just get a general review of the cards I pulled.
Here are probably the best images that I pulled. Stadium Club is good like that: 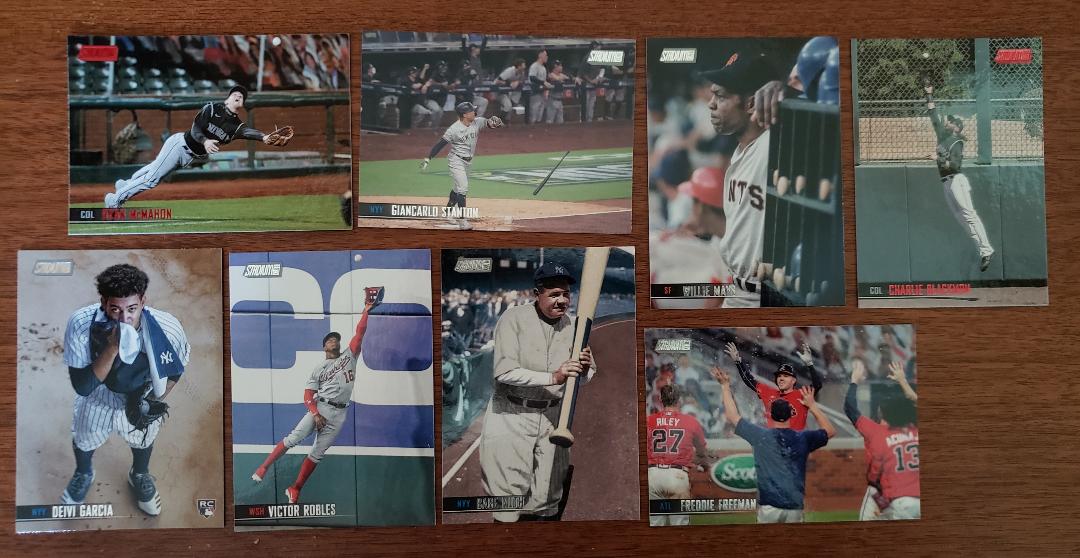 The Mays and Freeman are already in someone's trade stack. I really need Cards From the Quarry to start posting his trade bait again because of course I pulled TWO red-paralleled Rockies leaping for baseballs. 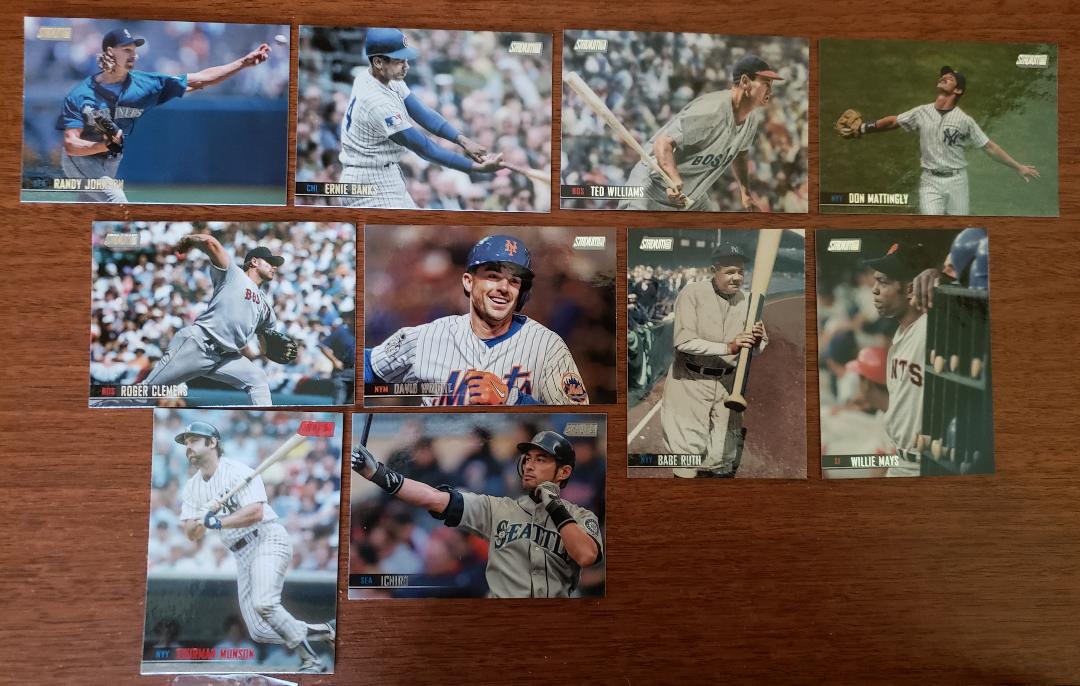 Here are the legends that I pulled, subtracting one that is in another person's trade stack. The Wright and Mays are spoken for, too. I've mentioned many times that I'd prefer '70s and '80s legends (like the Munson) over recent stuff like Ichiro and Wright. I was just pulling cards of those dudes 5-10 years ago when they were playing, they're not interesting enough from a "I haven't seen a card of him in forever" standpoint. 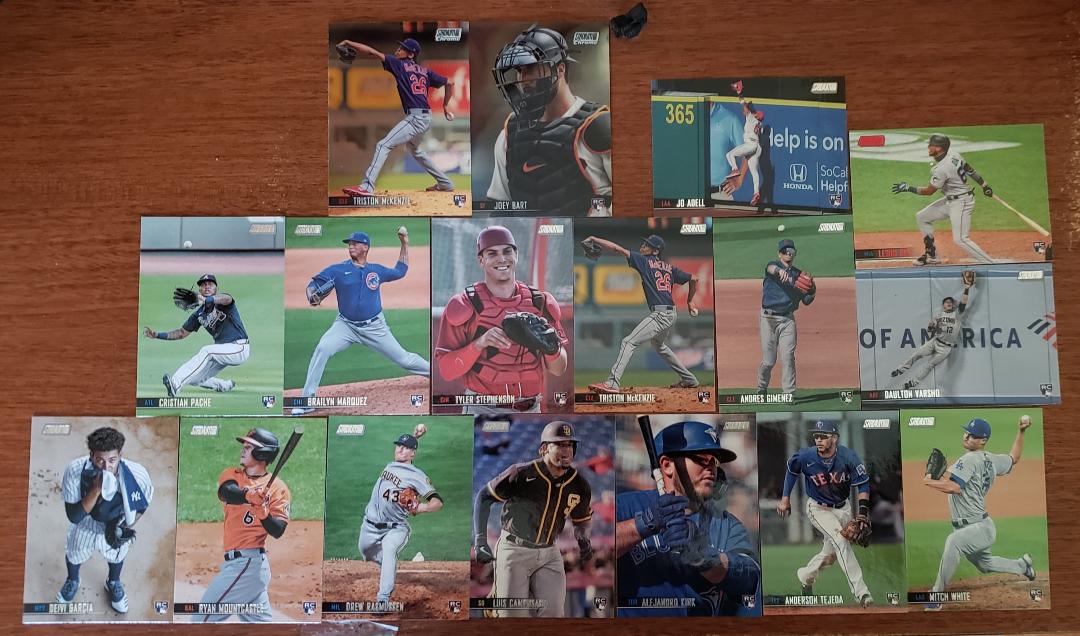 Here are the rookie cards I pulled. Just bananas. For one box, 14 of the 41 cards were rookie cards. I enjoy when someone posts a box break online and mentions they did good on RCs. Yeah, of course you did, dude, that's all boxes are now -- nonstop rookies. 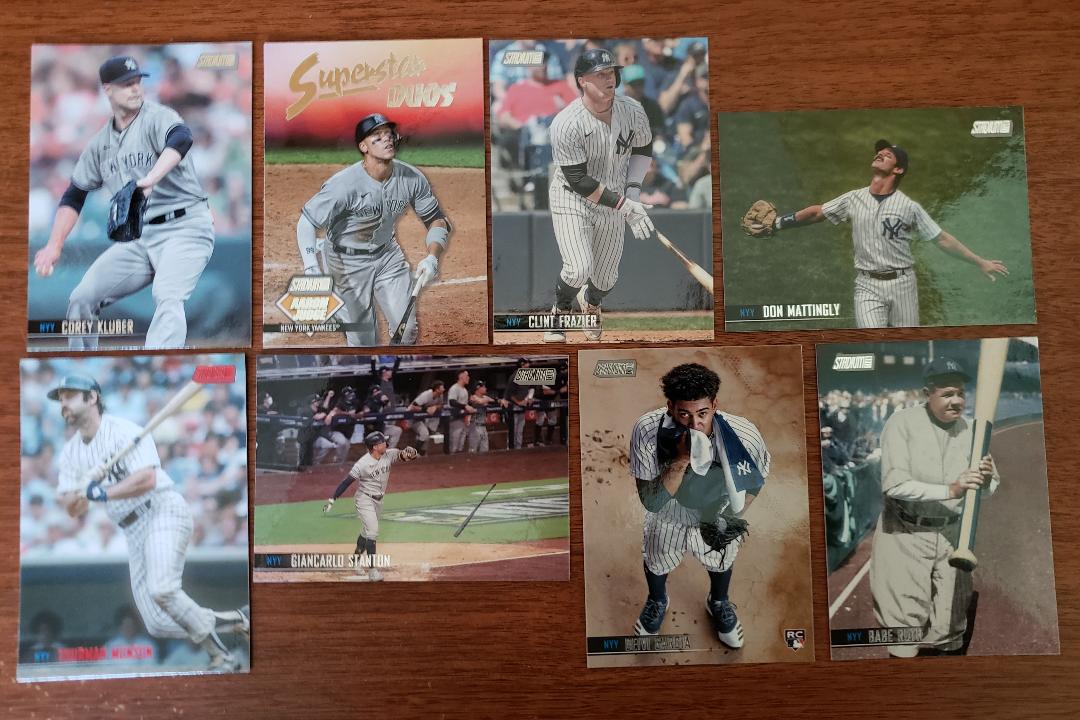 Same goes for the times I hear some breaker celebrate a "Yankees box!" Alert me when it's a Mariners box because almost all of my SC or A&G blasters are Yankees boxes. What is Clint Frazier doing in a set of 300 cards?
So, um, night owl, was there anything you liked about these boxes?
Yeah, sure, I showed you the best images already. 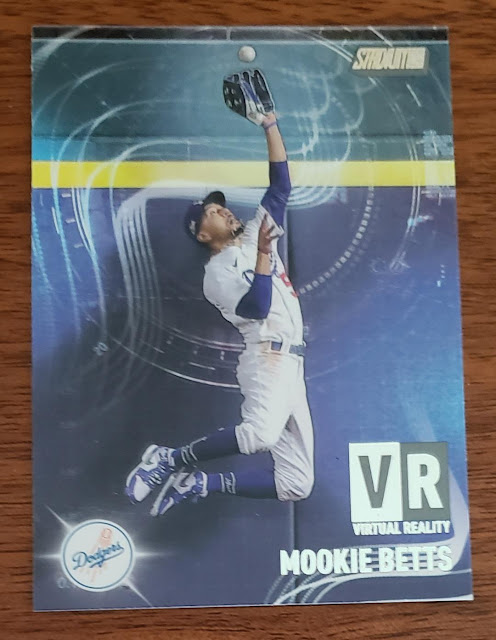 There was a nice Dodgers insert that I didn't have, which is key because Sportscards From The Dollar Store already sent me most of the base Dodgers (future post on the way!). 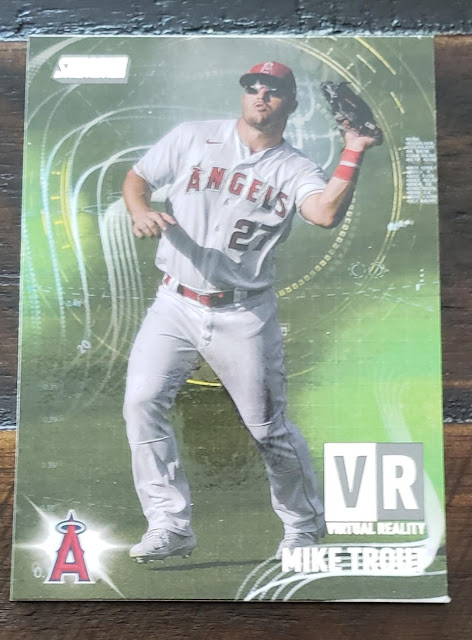 That was the other Virtual Reality card. I'm sure this will be in someone's trade envelope soon. 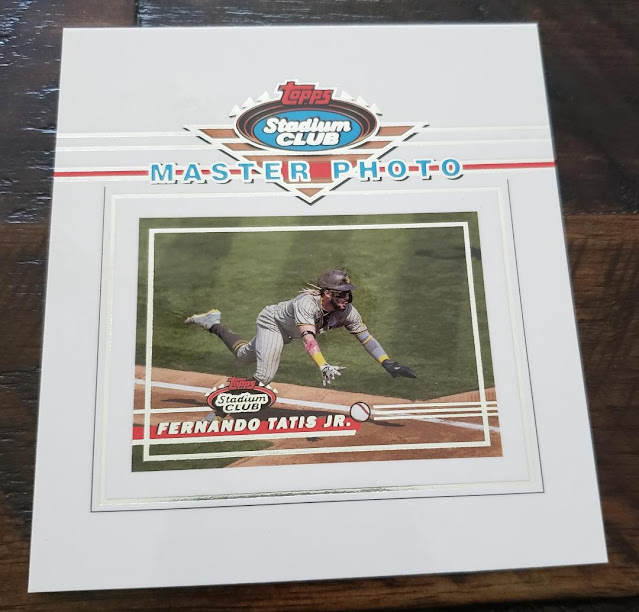 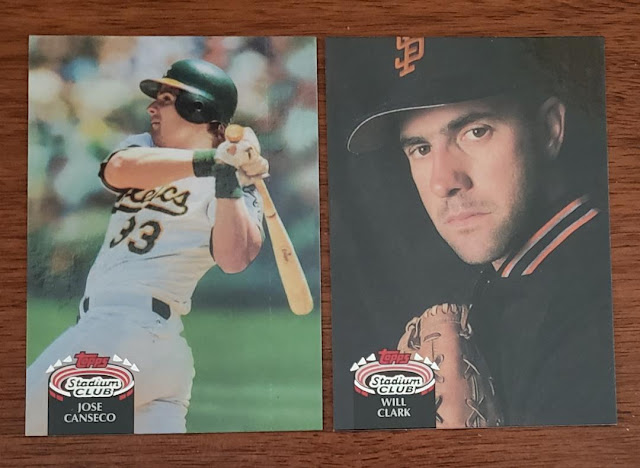 These are inserts that are basically reprints of 1992 Stadium Clubs everyone pulled in 1992. I certainly did. I almost considered purchasing another box besides SC because that Will Clark card has shown up in just about every SC blaster I've seen opened online. It's easily my least favorite card from these two boxes. 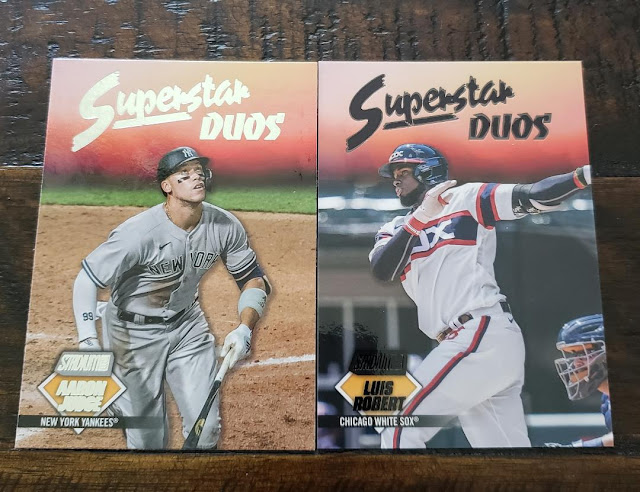 The Superstar Duos inserts are a tribute to past SC cards, too, I think. The Luis Robert is a black parallel numbered to /99. Wee.
OK, I guess I've gone a little negative again.
Probably should wrap it up then.
There were a few nice cards and some stuff for my collection and very needed trade material, too. But I'm glad these boxes were free because 41 cards for $19.98 is almost 50 cents a card and that is not worth it.
Like I said, take out all the filler and there is probably one good "album's-worth" of material here.
I'll probably stick to my pandemic habit of purchasing only cards that I want. Sure I'll get the itch to open something again. Until then, better make those current cards free.

Nick said…
I'm one of the few reprint apologists still around, but I will say I HATE that Stadium Club has reprints now. There's really no need to reprint dull 1992 Jose Canseco cards.

2021 SC definitely has some highlights but it did seem like there was quite a bit more filler than in years past. Especially with the gluttony of rookies.
July 26, 2021 at 9:39 PM

Nachos Grande said…
Topps is making it harder and harder to continue to be a "new card" collector, aren't they?! I guess team collectors don't bring in the big bucks?
July 26, 2021 at 9:59 PM

Johnnys Trading Spot said…
I love TSC, but I do believe this was their worst year in a long while. Even the card stock is lame, um off this year. Love that Babe.
July 26, 2021 at 10:09 PM

Matt said…
I still enjoyed the base photos and the blaster box master photos, but inserts were way beyond lame this year. NOt like the 90's SC with pizzaz
July 27, 2021 at 7:41 AM

Chris said…
And I just asked my wife for a Stadium Club blaster as a bday gift. Figures.

Mark Hoyle said…
I’ve always liked SC. But there is a lot of filler. I agree I would like to see more 70’s legends . My family also goes the gift card route for gifts to me. They only get eBay or Amex gift cards. That way I’m not limited to a certain store.
July 27, 2021 at 10:05 AM

Fuji said…
Wow. That's a lot of rookies. Although I do remember hoping to pull Jeff Bagwell out of the 1991 Stadium Club packs... I've never really considered SC to be a rookie card product. Sign of the times I guess. I picked up a blaster on Target's website and after seeing numerous reviews there are a few singles I'm hoping to pull.
July 27, 2021 at 10:55 AM

The Diamond King said…
I would be thrilled to get these for a birthday gift, but I doubt I would pay for them. Of course, you are going to get great photography, but I also really don't have any use for the reprints. And those Superstar Duos cards never thrilled me either. Sweet Tatis box topper though, I have a small stack of those from the original Stadium Club set back in the day. Hard to store, but I like them anyway.
July 27, 2021 at 12:49 PM

AdamE said…
At least they used some different pictures for some of the legends instead of recycling photos we have seen over and over a thousand times.
July 27, 2021 at 5:00 PM

Jon said…
I was almost tempted by one of these the other day, but I feel like I've seen the same cards from every single box that's been on a blog so far, and most of what I've been seeing doesn't do very much for me. The cards look nice though, so I guess that's something?
July 27, 2021 at 7:28 PM

Nick Vossbrink said…
Original Master Photos fit in 5x7 2-pocket photos. I'm curious what size the Blaster versions are. And as much as TSC is my favorite product that Topps releases each year, I hate that after you cross out the rookies and legends there's only enough room on the checklist for like four players on each team who are established players. If I were kind of Topps I'd cut all the insert sets and replace them with a single legends insert set which I would use to clear up room on the actual CL for a couple more current players per team.
July 28, 2021 at 12:51 AM