I've wanted this book longer than she's been alive 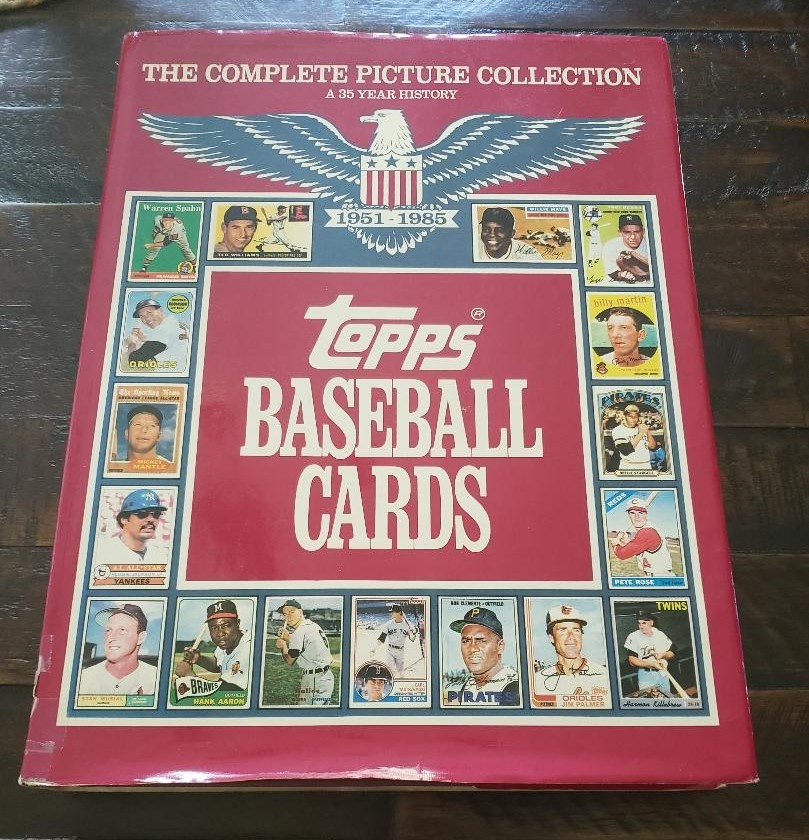 Somewhere around 30 years ago, I went to my parents' house while on summer break from college.
My dad and one of my brothers took a trip to nearby Owego where my grandmother lived. She was in her 80s at the time and we were there to do some house chores for her. One day we drove over to the small downtown area for some shopping and ducked into a second-hand bookstore, which was easily the highlight of the trip for me.
There were some oversized discount books for sale and one of them was the 35-year picture history of Topps cards in which every Topps card issued between 1951 and 1985 was displayed. This book was fascinating since the day I heard about it (I imagine any collector would be fascinated). I always wanted to own it.
The book was 15 or 20 dollars, a good deal even then. But either I didn't have the money or didn't want to spend the money and so I walked away without it, even though the book was destined for me.
As the years went on, that book began to grow in stature. Every time I thought to look it up, the prices were always too much. And then when buying things on the internet became a thing, it really went up. I remember asking for it for Christmas one year and my mom looked around and then dismissively announced, "oh, that book. That's expensive."
And so it was. I knew I could search for deals, get a used copy, etc. But even those seemed too much.
So the years went on and, you know, maybe it's finally time to put that thing on my wish list again. So I did.
My birthday came and went. The book wasn't purchased ... or so I thought. It actually arrived yesterday, six days after my birthday.
My daughter had bought it. Found it for 30 bucks, because she is really good at finding online deals, everybody her age is. (Those college textbooks are a racket).
And I now have a book that I have wanted for longer than she's been alive. Heck, I wanted it 10 years before she was born.
This book is huge, heavy and an excellent reference tool. Sure, it's not as fascinating as it was when I was a much less experienced as a collector. A big part of the attraction of this book is that you've NEVER SEEN THESE cards EVER. It was your one chance to see the images (because, also, what was the internet?). But I still love it. 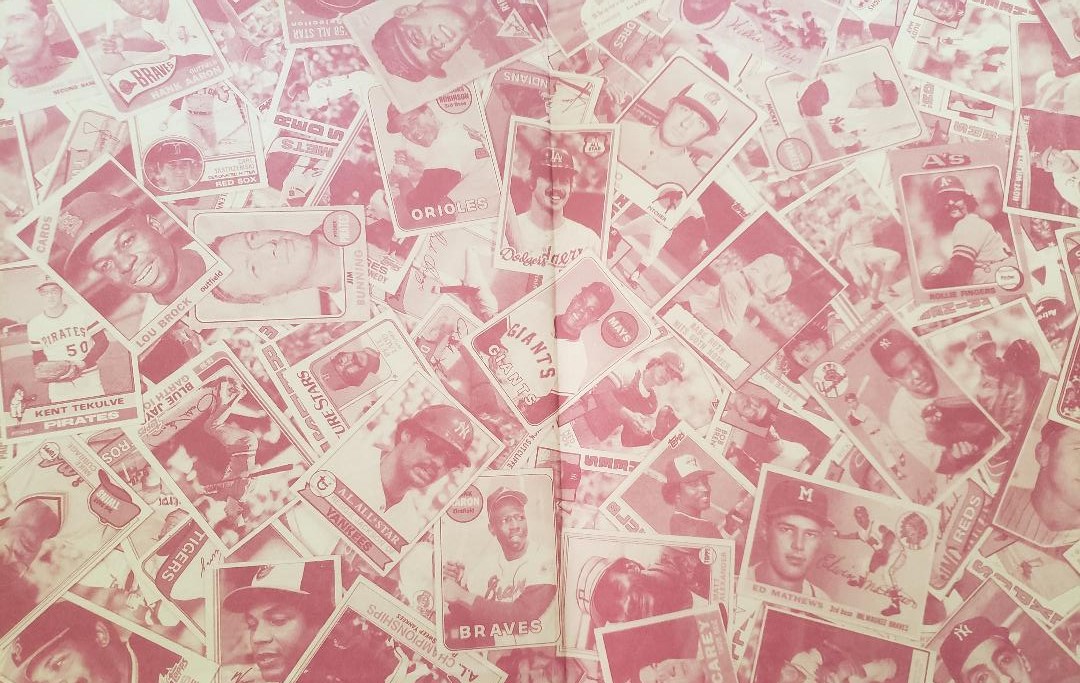 Look at that inside cover! Ron Cey's 1978 card is front-and-center! 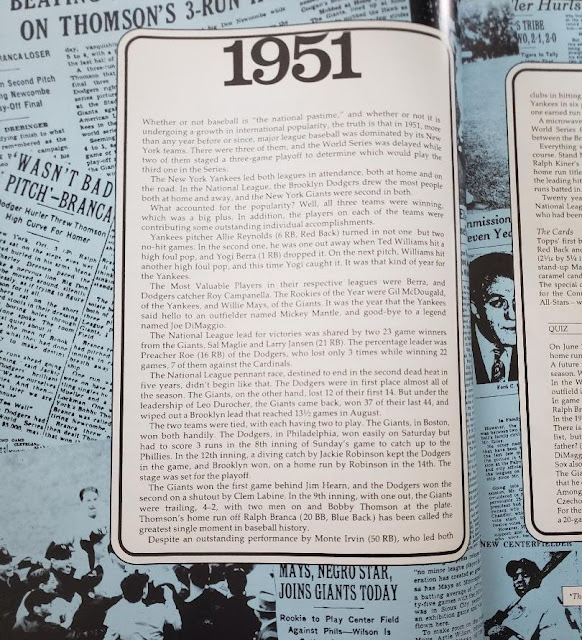 The book is very well-done with an introduction to each card set year, recounting the basics of that baseball season and the Topps set. I love the newspaper clippings on the outer edges in which articles from that year are used. That continues every year. 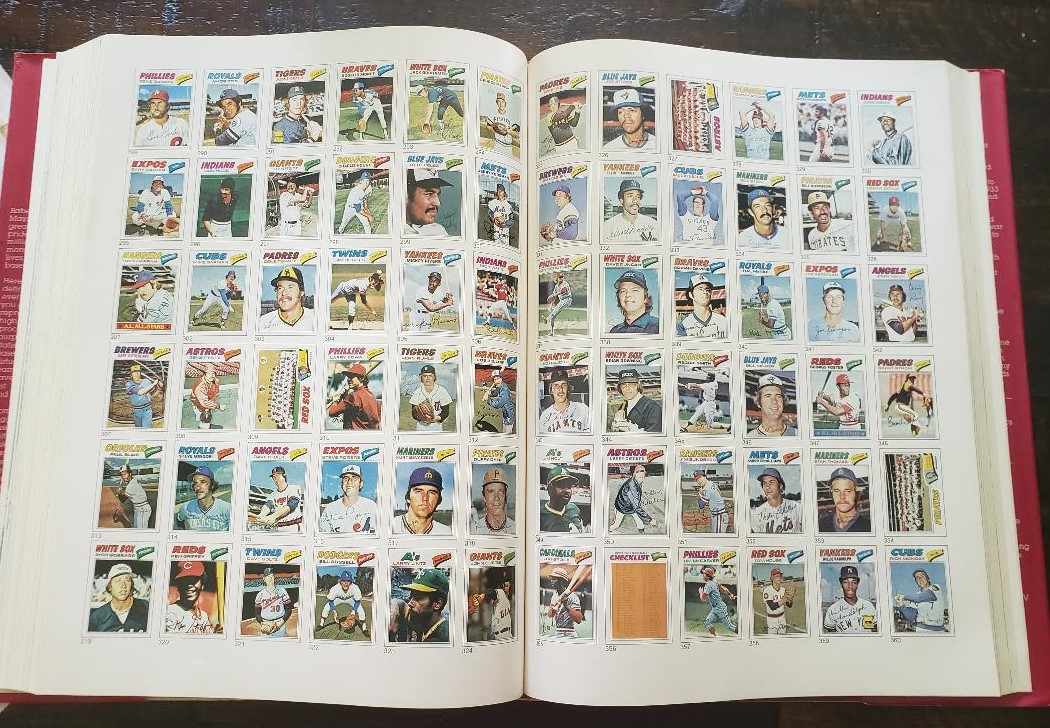 That is an example of the layout on every page. Just spectacular still. And, yeah, I've completed this set. It's still nice to look at. 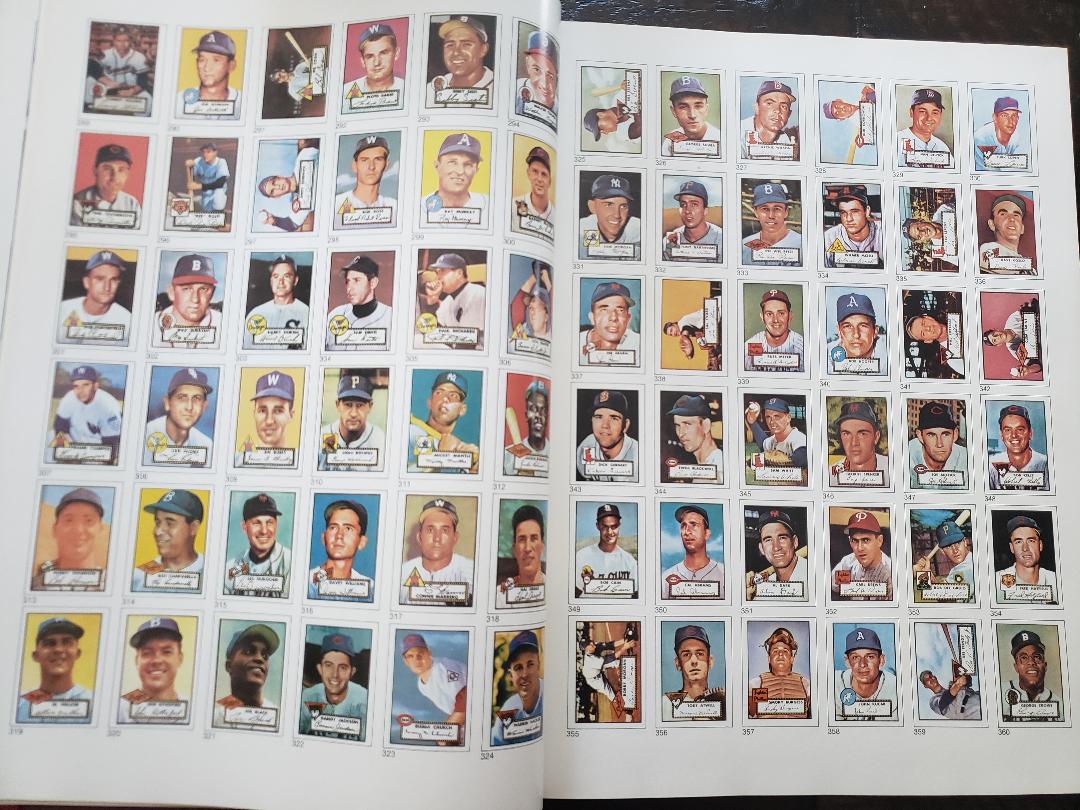 Of course you're never too experienced. Nobody has all the cards and that's why there are these two pages of 1952 high numbers that I can drool over for the rest of my life because the chances of even owning a couple of these cards are remote.
Let's all stare at that Mantle and Robinson for awhile. 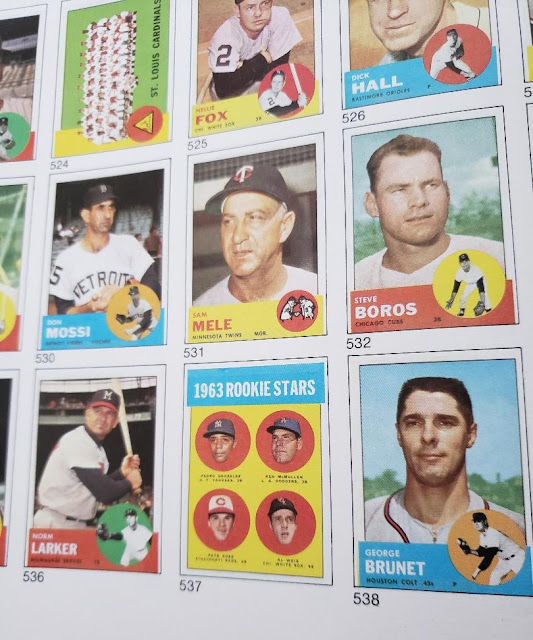 This is about the only way I'll view the McMullen rookie in paper form. 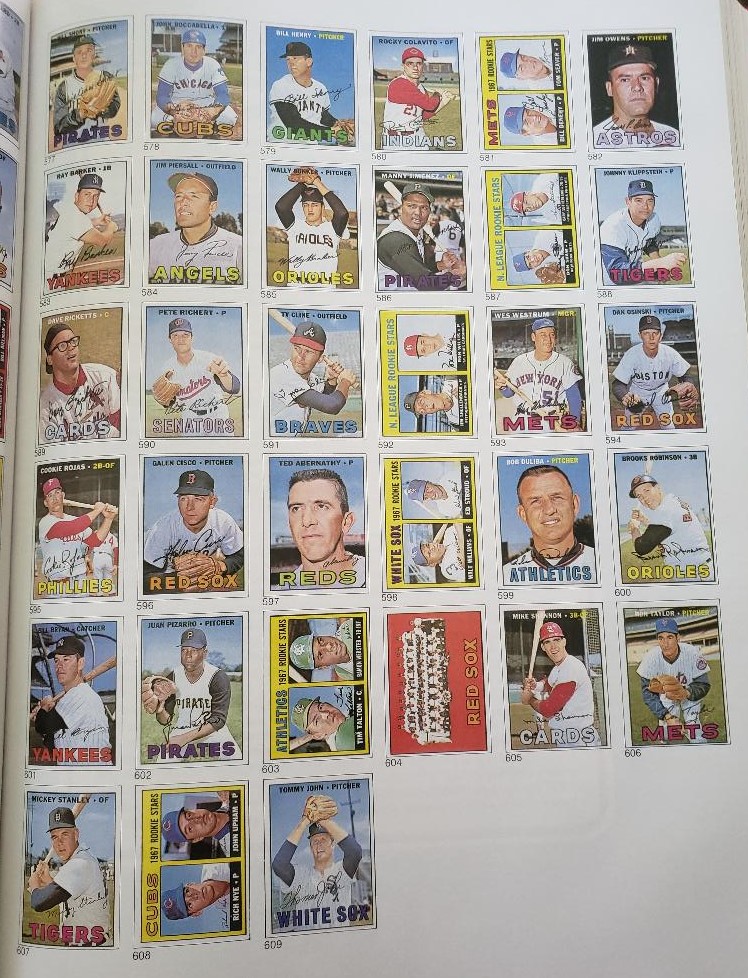 But I could probably leave this page open as inspiration like exercisers do when they put pictures of radically in-shape athletes on their wall. This is the final page of the 1967 set with all those brutal high numbers. 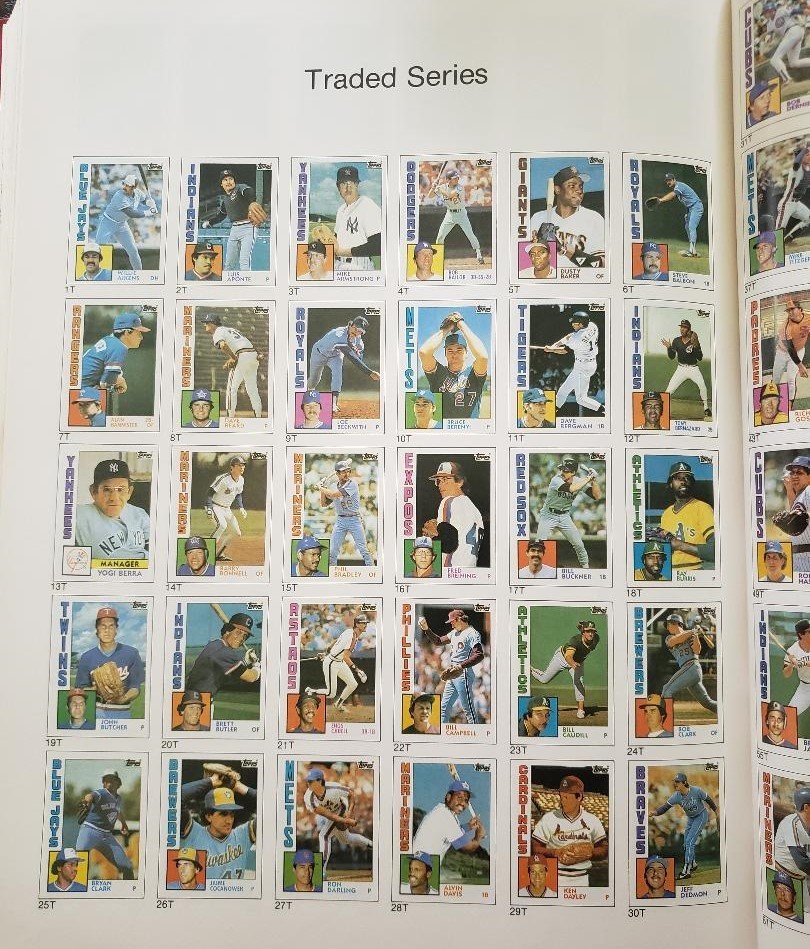 The later pages -- everything from 1971 on -- contain nothing but images of cards I already own. However, I have not completed the 1984 Traded set and it's nice to see these. The book includes all the Traded sets through 1985. 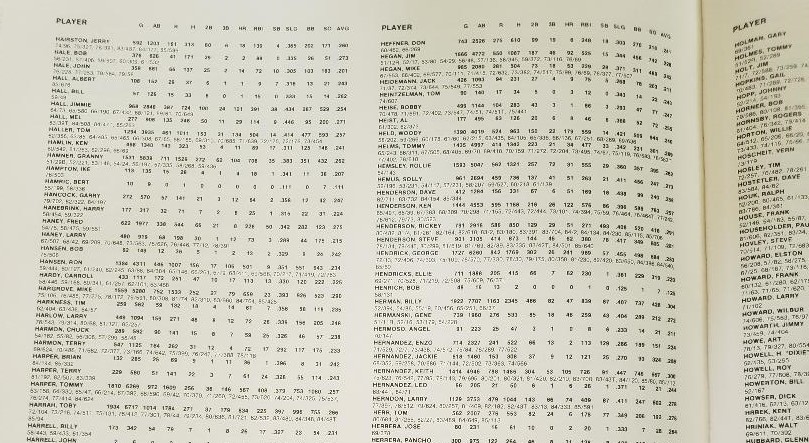 The back of the book contains lifetime stats for every player pictured on a Topps card from 1951-1985. Another nice touch.
This book was updated twice, once after the 1987 set and once again after the 1990 set. But 1985 is good enough for me. I've completed those other junk wax sets and see them plenty.
It's a fantastic book and you can tell it was put together with care (can't say that for current-day Topps with most of its stuff). I'm still in search of the perfect place to display it and I'm sure I'll be looking through it again and again.
The more I think about it, the more I can't believe I have it. Or that my daughter found it for $30.
It was definitely worth the wait.

Jordan said…
I have a very funny story about that book. My uncle gave me a copy when i was a kid, cause he got an upgraded version of it i think, and the binding of the one i got was very loose, very weak, very old. And I flipped through it all the time, looking for hall of famers and yankees and such. But we had to be very careful with it after a while, and not shelve it a certain way, cause of the binding. Anyway, for the holidays one year, my parents went to a book-binder in Philly, and had them re-bind the thing, with a new cover [conserving the title font], as well as printing my name on it, and the name of the blog [this was within the first few years of it]. So that book is very important to me as well, and I'm glad you've finally gotten your copy of it.
July 23, 2021 at 6:12 PM

RoundtheDiamond87 said…
Great book. I kept wanting to reorganized the cards in the book, so I credit it with leading me to reprint sets, which then led me to building vintage sets. There's also a book in that series for Pre-Topps and Bowman cards, which contains tobacco sets and many others.
July 23, 2021 at 6:27 PM

Old Cards said…
I saw this book when it first came out in our local bookstore for $100. I wanted it badly, but could not justify that much for it. Several months later I saw it in a bookstore while on vacation for $20. I couldn't believe it and couldn't get it to checkout desk quick enough. The clerk said "this must be a popular book, we have sold several of them today". I gave her the money and made a quick exit. With all these images so readily available now, it has lost some of its charm, but I still enjoy owning it. Glad you finally got your copy.
July 23, 2021 at 11:17 PM

Anonymous said…
This book is a spoiler. I'd rather discover the cards more "organically". On the plus side, it's a cheaper and quicker alternative to collecting cards in a binder.
July 24, 2021 at 5:25 AM

This is a great book that I remember seeing in a Waldenbooks back in the 80s for $75.

I finally got a copy a couple of years ago and it's a great resource to look through.

I believe there is a Football version of this book.

Angus said…
What an awesome gift! I didn't know that a book like that existed. I think I'm going to have to look for a copy.

mr haverkamp said…
Just pulled my 1985 copy off of the shelf, it brought back fine memories. Doubt I paid full retail (75.00!) in 1985, most likely found it in their half price stack a year or so later. As long as you have this book and the Boyd/Harris Flipping, Trading, etc book, your bb card library is very well stocked!
July 24, 2021 at 5:36 PM

Jon said…
As per usual, I had never heard of this book before. I can only imagine how big of a deal this one would've been in the pre-internet age, and can understand how nice it would be to still have, especially for anyone looking to take a break from the internet.
July 24, 2021 at 7:47 PM

Chris said…
Fantastic gift, and a huge shout-out to your daughter for finding and purchasing this one for you. I definitely know that nostalgic feeling of having an item you missed out on (or had but didnt appreciate) earlier in life.

Matt said…
Love that book! I just got one earlier this year and have spent numerous hours flipping thru the pages and discovering cards ive never seen before. I had this book as a kid: https://www.abebooks.com/Complete-Book-Collectible-Baseball-Cards-Consumer/17537925043/bd
It was pretty inspiring to me growing up but obviously, no where near as “complete” as that book!
July 25, 2021 at 11:43 AM