In it to win it 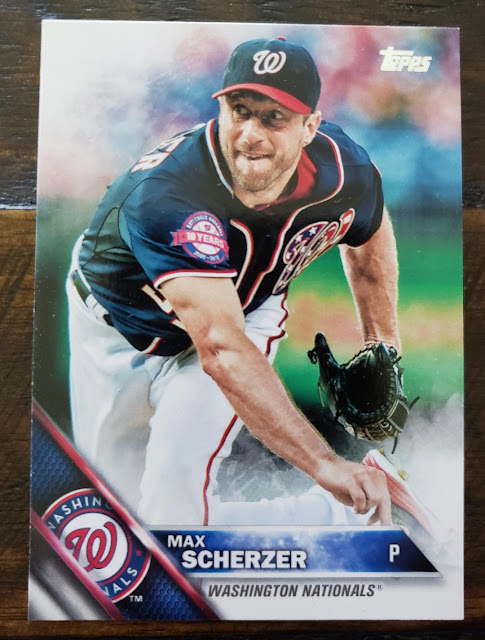 When I was in college, I worked the hamburger grill at one of the on-campus restaurants my first semester or two.
The cooking area was connected to the nearby cafeteria and one of the cooks who worked next to me was named Cliff. He was probably in his 50s or 60s, a cheerful Black man who enjoyed working around young college students and had a smile for everyone, even a couple of notoriously grumpy people who worked there with him.
Cliff loved to play the lottery and everyone knew that. He would always respond to jokes about him throwing money away every week by saying, "You've got to be in it to win it!"
I'm sure that wasn't the first time I heard that phrase, but it really stuck with me with Cliff uttering it so often. And it's what I think of now every baseball trade deadline or offseason. You've got to be in it to win it.
Once I used to rag on the Yankees, like a lot of people did, because they "bought their championships." But that was a different time. It was the late '70s/early '80s, a much different economic landscape and people regarded baseball and money differently then. The Yankees were unusual ... and hated for it.
Today, it's different. It is pretty clear that if you want to win a title, you need to spend money and make deals. To the newbie fan, it would seem every team would want to do that. But it's obvious that's not the case. The "gut-your-team-now-so-you-can-win-later" practice that probably began with the Marlins more than 20 years ago is now a plague on the game. So many teams subscribe to this philosophy today. I'm so glad my team isn't one of them.
The Dodgers completed a deal for Max Scherzer and Trea Turner with the Nationals this afternoon. They are trying to win a second straight championship because -- and this shouldn't be a foreign concept -- they want to win one every year.
Obviously, I am thrilled. The initial thrill was because of this:

This came over Twitter yesterday afternoon and, man, was it annoying. It was even more annoying because of the immediate reaction to it by certain baseball Twitter people who have made my dislike for the Padres even greater.
Such as:

"The most fun team in baseball," something I've had to hear too many times from MLB types the last couple of years, will always be my team when they're playing well. Otherwise, that phrase has no meaning. No team has a monopoly on fun.
But the tweet became quite amusing as the hours went on because not only were the Padres not going to acquire Scherzer -- or to be congratulated for doing so -- but the Dodgers were going to land him, instead ... and Trea Turner.
(Insert insane laughter here).
This has been the most enjoyable trade deadline session in at least a decade, possibly ever.
Like every time the Dodgers acquire a big name, I have to look to see what cards I have of those players. In this case, I wanted to see if I have the rookie cards of those guys, which is always a crap shoot because I never actively seek rookie cards.
But it turns out I do have some of them. 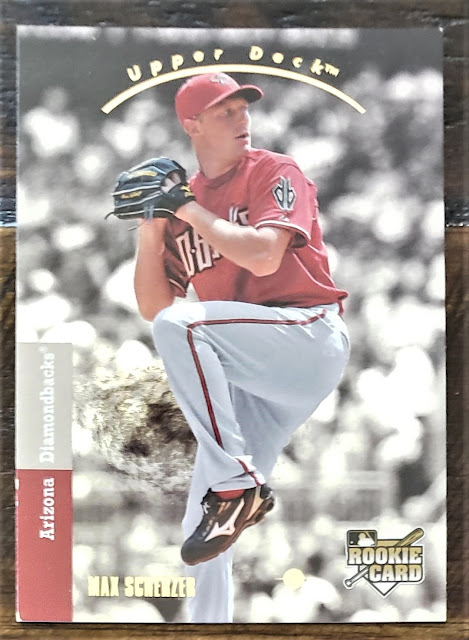 There is Scherzer with the old-school rookie card logo. Thirteen years have gone by, I think we can call it "old school".
I've held on to this card while I've traded several other cards from the 2008 Upper Deck Timeline set, a set I used to be collecting. I'm glad I held on to it now. I also have all the other Timeline RCs of him, as well as the Allen & Ginter, Heritage, Stadium Club and Masterpieces RCs. 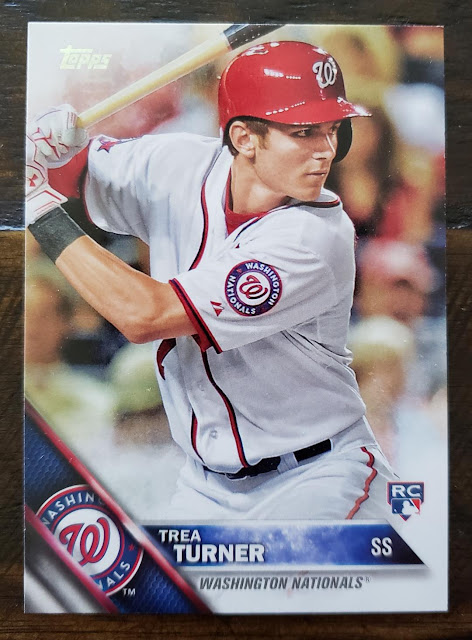 Trea Turner's rookie card is from the 2016 Topps "The Ballpark Is On Fire" set. Not a great set, but a great player. 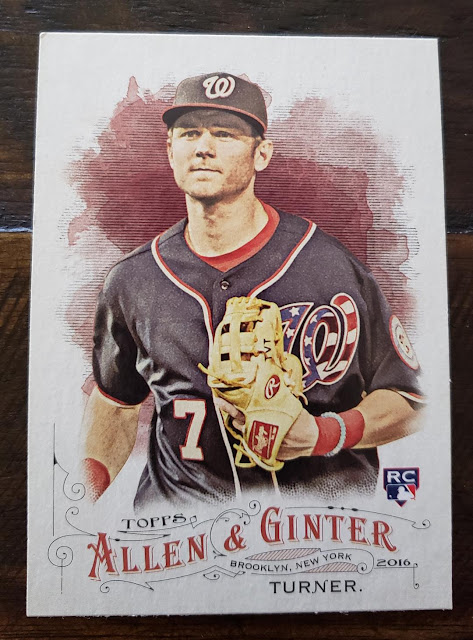 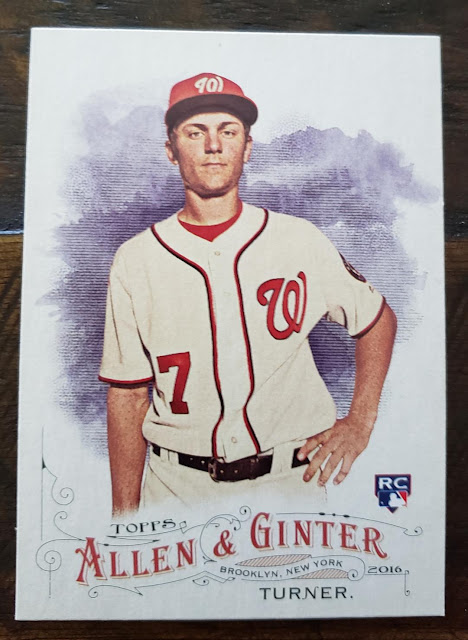 And, hey, look, I have the TWO Trea Turner rookie cards that Topps wedged into the Allen & Ginter set for reasons I still don't know. 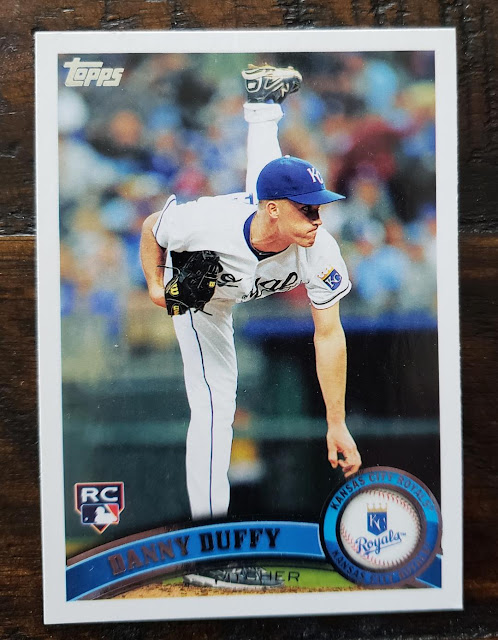 And here's the rookie card of the other guy the Dodgers picked up during the deadline deals.
While the new pitchers are very necessary for L.A., I don't fully know how the Dodgers are going to fit Turner in with all the other people who play the infield for the team. I'm sure it will become clear over the next few games.
I just know I'm glad I'm not a Padres fan, for about the 2,000th time in my rooting career.
The Padres, though, are finally one of those teams who actually try to acquire players so that they can win (for a long time they weren't that kind of team). I have respect for all the teams that tried to better themselves these last couple of days -- the Yankees, Red Sox, Blue Jays, A's, Rays, Cardinals, Giants, Phillies, Mets, White Sox, Braves, Brewers and Astros (jury is still out on the Reds and Mariners).
As for the rest of the teams, I don't know what they're all doing. The Cubs and the Nationals each won World Series in the past five-plus years. That's crazy. It's obvious that the MLB is pretty disfunctional in this way and it can't go on like this forever, even if the Dodgers are benefiting right now. A fan should be comfortable that their team is making a reasonable effort to improve themselves.
The Dodgers play by the rules that were handed out. And they're trying to satisfy the contract they made with the fans, that they will produce a winning ball club. That's why I will always defend them.
Those other teams with the owners who aren't in it to win it -- who look at their clubs only as a profit-making machine -- are the ones ruining the game.

Zippy Zappy said…
Yup, I agree with your sentiments about owners who'd rather sell a vague "hope" than an actual MLB caliber baseball team. Pretty surprised at how many teams got in the action after two offseasons of nothing but eh, I'll take it.
July 30, 2021 at 7:28 PM

Rod (Padrographs) said…
I think with the Padres rotation, the Dodgers and Giants are going to be battling it out. As Dem Bums used to say, Wait til next year.
July 30, 2021 at 7:28 PM

John Bateman said…
I can understand getting Scherzer, he is in his late 30s but why would the Nationals trade Turner. He was one of the best 5 players in the league and about 27/28 years old. To give him away for prospects, strange.
July 30, 2021 at 10:39 PM

Brett Alan said…
Mixed emotions for my Mets. Javy Báez is certainly an exciting pickup, but most of the other teams we're competing with picked up at least one player who's as good or better, and we didn't do much to address our lack of starting pitching depth. We really need to hope that there are no further setbacks or injuries to any of our starters.

I did check, and I have a few Báez cards but no rookies. And only one Trevor Williams. But it's not as though either are going to be with the Mets for very long anyway.
July 30, 2021 at 11:53 PM

Doc Samson said…
Congrats to your Dodgers, Mr. Owl, for making such bold moves. No one will ever accuse them of sitting on their hands. Living here in Chicago, I am experiencing both ends of the spectrum. My White Sox really bolstered their bullpen big time. White Sox fans are really pleased with their recent moves.

As for the other side of town, Cub fans are arming themselves with pitchforks and torches after trading away The Big Three. What the heck kind of team are the Cubs going to field next year?
July 31, 2021 at 1:14 AM

bbcardz said…
Wow to the Max! (Scherzer, that is.) I was really surprised to hear that the Dodgers got both Scherzer and Trea Turner. I figured Danny Duffy would be the extent of our trade deadline pickups, especially after hearing that Scherzer was close to being dealt to the Padres. This was certainly a very happy surprise. And like you, I so appreciate the Dodgers philosophy of going for it every year. I don't recall the Dodgers ever being one of the "gut-your-team-now-so-you-can-win-later" teams.
July 31, 2021 at 1:56 AM

Nick said…
Between Pujols and now Scherzer, the Dodgers have added two the most iconic players of this generation in a single year, and that's crazy. Really like Mad Max & I hope he does well for your squad. I've collected him since his early Diamondbacks days and have quite a few of his rookies as well.

Anonymous said…
Spending money goes a long way towards getting to the playoffs.
Not so much when you get there.
July 31, 2021 at 5:24 AM

Chris said…
Adding Scherzer and Turner was a heck of a move. I was hoping the Red Sox would get Max (or any pitcher, really)

The UD Timeline is one of my favorites, too. I've always liked the '93 SP design and made sure to get Max and Clayton Kershaw's RC back when COMC was still a functioning business.
July 31, 2021 at 10:17 AM

Fuji said…
As you mentioned... the Dodgers and all of the other teams that have been stocking up on talent are playing by the rules... so it's all good. I do think the game is more entertaining when there's more parity, but that can be said for any professional sport.
July 31, 2021 at 10:42 AM

Jafronius said…
It's been probably the most depressing 48 hrs in my lifetime watching the Cubs. I didn't expect Turner to be on the move too; congrats to the Dodgers for making that move.
July 31, 2021 at 6:37 PM

cardstacks said…
Always sad to see teams get gutted like the Cubs and Nats did. And like you said, both teams have fairly recent success with some of the core players that were moved. It's tough for the fans to see that happen.
July 31, 2021 at 8:44 PM

BaseSetCalling said…
If you say “In it to win it” in Michigan, you are likely to hear “like Yzerman” in response. At least Yzerman is a GM now, so that helps.

Read an interesting take on “The Deadline” today - that the early ‘00s Marlins were the first team to be deliberately “blown up.” But I wonder if older trade deadlines were perhaps similar, and we just noticed less?
July 31, 2021 at 9:30 PM