Working for a living 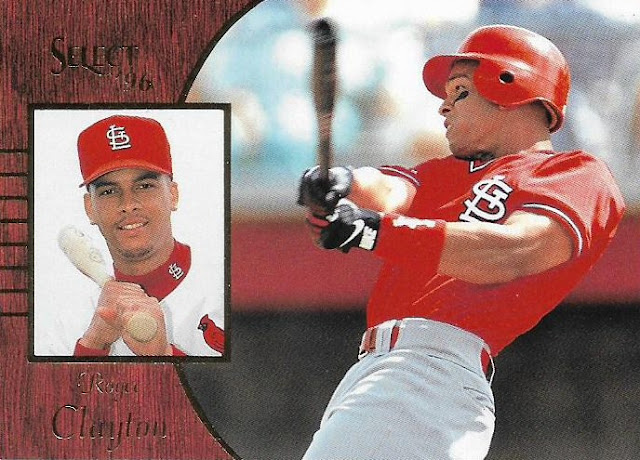 A long time ago -- more than 20 years now -- I drove up to Montreal to interview some major leaguers for a story.

It wasn't the easiest process. Only somewhat familiar with the city and Stade olympique, I didn't know any of the players, other than their names and vaguely what they looked like. I didn't know where I could find them or their routines either. So, as I wandered around the locker room and clubhouse as players and coaches went about their business, I searched in vain for someone who would be good to talk to about my topic.

Someone told me that one player who might help was veteran infielder Royce Clayton. I happened to spot him walking through the locker room with a bat in his hand and asked him if he had a minute to talk.

He turned to me hurriedly and said, "I've gotta go work," and vanished.

That annoyed me. And it continued to annoy me for almost 20 years.

First of all, I needed maybe two minutes of his time, five at the most, to ask a couple of harmless questions, allegedly about someone he admired.

Yeah, that bothered me.

But, you know what? I've come around.

Fans have long held an idealized view of a major league baseball career and that includes me. We say, "they play a game for a living." And that's true. The between-the-lines stuff looks like a great amount of fun. But ask a ball player about the thing he does for a living and he'll probably use "work" more often than "play." Or at least more often than we would.

That's because, like anything you do for a living -- that supplies your paycheck -- it slowly becomes "work." Anything with expectations or responsibilities or objectives or instructions or requirements is "work." No matter how much money, no matter how much fun.

Secondly, fans often don't see what's involved, what leads up to all that fun we see on the TV set or when we're in the stands. There is a bunch of work. Players need to be in shape, especially in the last 30 years or so. So they work out in the weight room, go through their offseason workout rituals and overhaul their diet. They run. All the time, they run. They drill. Fielding drills. Situational drills. How many times have you heard, "we work on that in spring training"? That is work. If you ask me to participate in a drill on who covers first base 30 times in a row, it's going to turn into work.

Yet, if a player complains about some inconvenience on the job or dogs it down the base line, we're on him. "You're getting paid a bundle to play a game, dude!" But we're not working out for three hours every day from November through February and then working our bodies almost every day from March through September or October.

As baseball -- and other sports -- has become more and more of an entertainment and identity vehicle for fans, it's developed into more of a job for players.

Part of the problem is baseball cards (you thought I'd never get there). 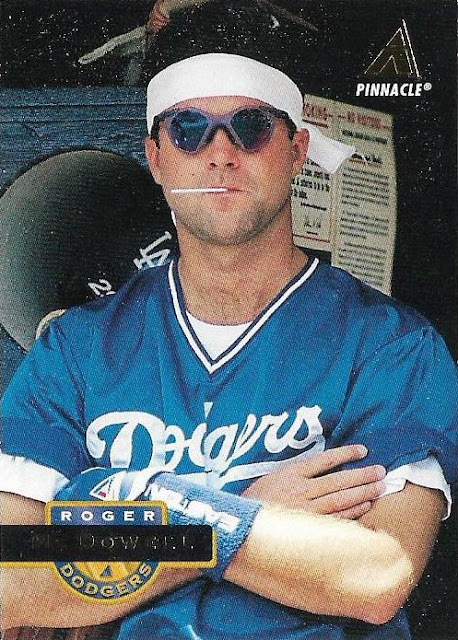 Baseball cards don't do a great job of showing that a professional baseball career can be work.

Instead, baseball cards show players goofing off. Laughing. Chilling in the dugout. Signing stuff. Or celebrating. They show lots of celebrating. There isn't a lot of celebrating at work. Not the work that I know. Certainly nobody is showering Gatorade or bubble gum on anyone at my office.

So that's what baseball cards convey. Baseball is cool and it's fun. They're either showing what's between the lines (that's mostly what baseball cards show), which even baseball players will tell you is the fun part -- the nonwork part -- or showing the casual side. There's a lot of history of this on baseball cards. Decades of happy poses and nonchalant appearances.

I looked for anything that looked like work on my baseball cards. I didn't find much. 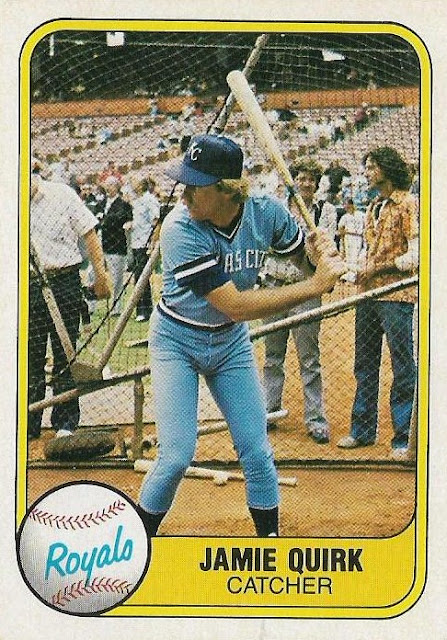 I think many baseball players would describe batting cage time as "work." They're "working on stuff" in the cage. But we look at that and think of the place down the road where you can step into the batting cage for a few swings and then take a spin around the go-kart track and grab an ice cream cone. Besides, look at those people hanging around Jamie Quirk. They look like they're having a good time. How can that be work, Quirk, if everyone is having a good time? 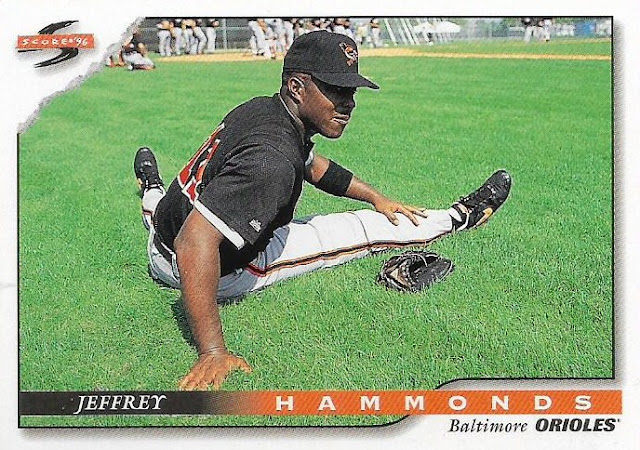 Stretches. OK, now we're getting somewhere. That looks like work to me. Stretching may not be all that unpleasant but I certainly wouldn't call it fun. 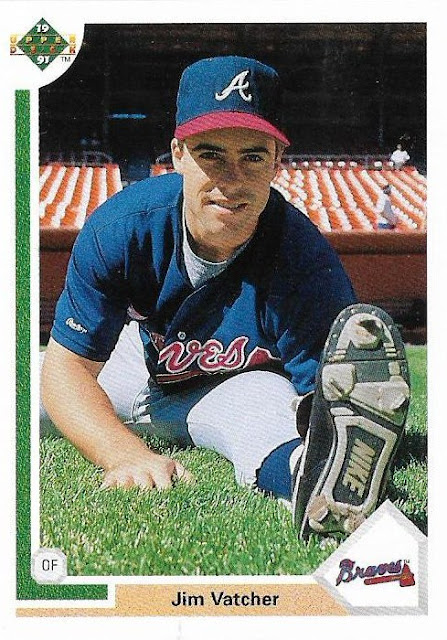 You're not "playing" when you're stretching. And having to stretch while someone is taking your picture seems pretty close to work. Get that thing out my face when I'm doing groin work, pal.

But I didn't find that many stretching cards in my collection either. 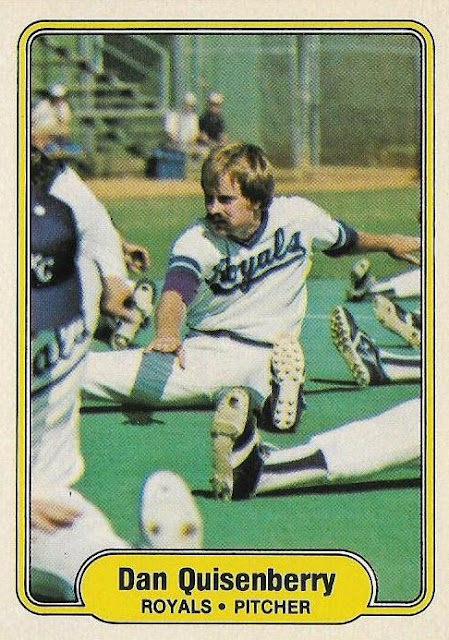 This one is pretty much the gold standard of stretching cards. We all know these kind of drills. That's calisthenics. Straight out of P.E. No kid I knew thought calisthenics in gym class was playing. It certainly wasn't floor hockey or basketball. It wasn't fun. 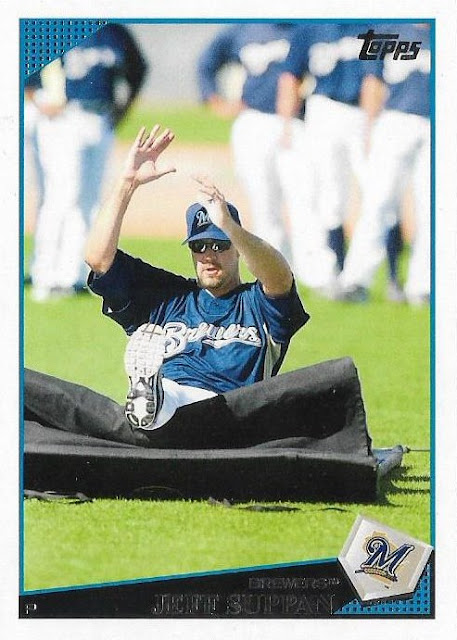 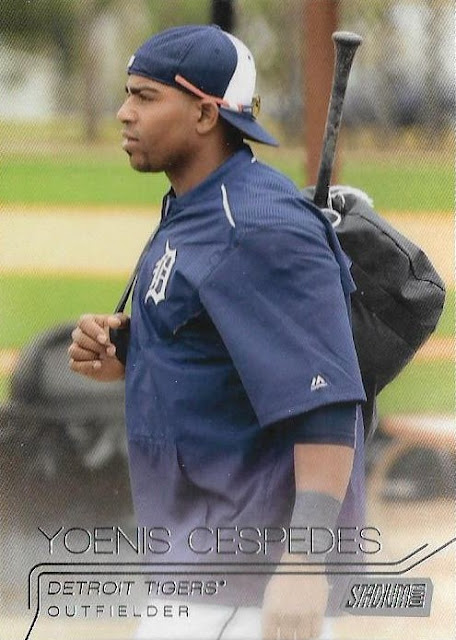 This is often is as close as we get on baseball cards: evidence that work will begin or has just ended. Lugging that equipment, that just says work, even if they're not showing you the work. 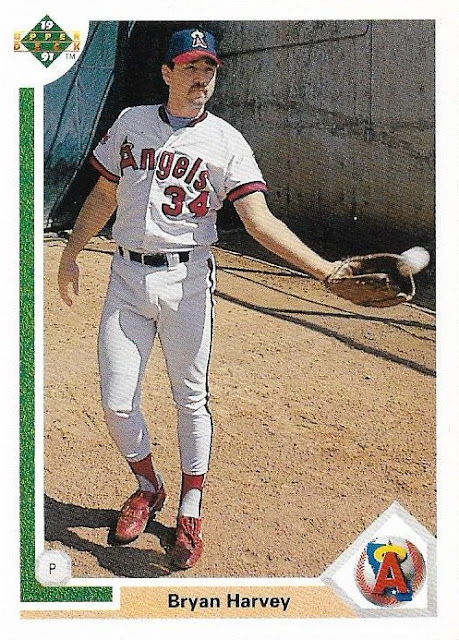 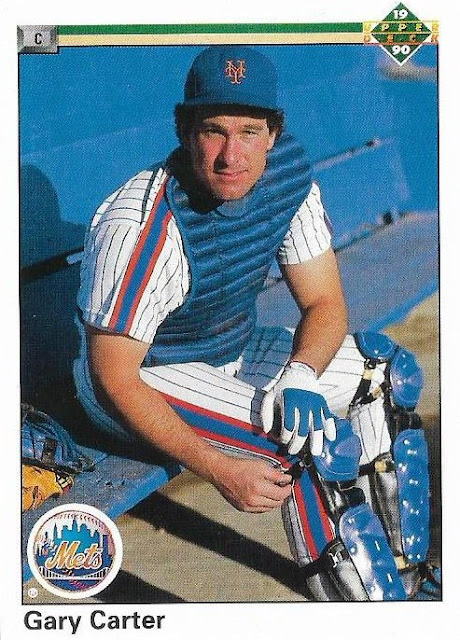 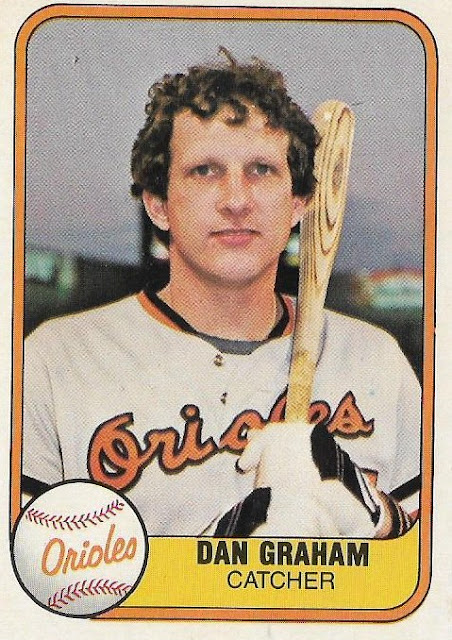 But mostly what we see is the aftermath: the sweat. 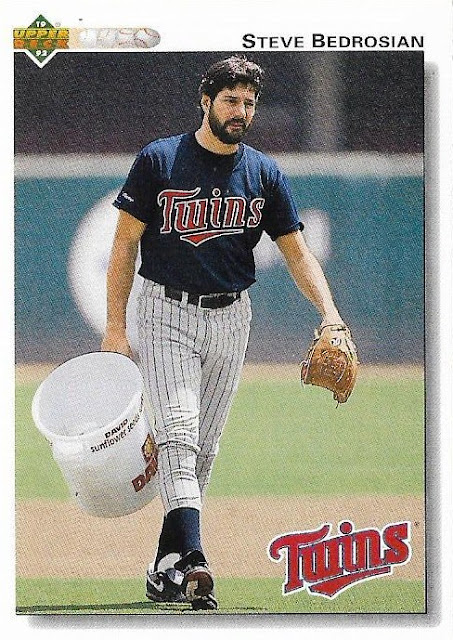 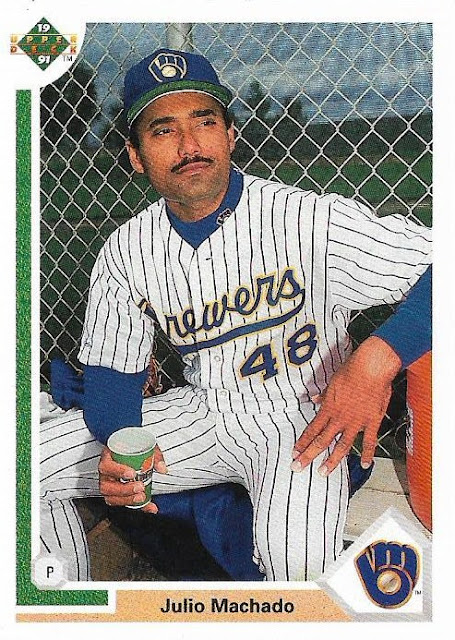 It's difficult to convince us that ballplayers actually do work. But they do.

So on this Labor Day I'm sorry I thought that about Royce Clayton, even though I still think he could have stopped and answered a question.

I had a job to do. But baseball players have a job to do, too. All you have to do is turn on your TV today, a day most of us have off, and see them working.

Well, the ballplayers will say they're working anyway.

Sean said…
I believe that "talking to the media" is part of a ballplayer's work. So I think even with your current understanding of playing ball = work you have a legit basis for criticizing Clayton, since by giving you the brush off he was shirking one of his employment duties.
September 2, 2019 at 9:37 PM

Nick Vossbrink said…
I kind of love this post and the idea of cards that show players working. I seem to recall a few Stadium Club cards of players lifting weights (not that Canseco one that Paul Ryan ripped off)
September 2, 2019 at 11:10 PM

Mr. Lasiewicz said…
I used to have to travel often for work. I got sick and tired of being in aluminum canisters. Being a pro ball player would be fantastic, but all of the travel would take its toll. In some ways it is incredible that people can live like that for 10-20 years of their life.
September 3, 2019 at 9:55 PM

Fuji said…
If I were a player, I could handle the practicing, studying, stretching, and the transporting of equipment. But the thing I could never deal with would be the interaction with fans and the amount of traveling. As much as I enjoy collecting autographs, I could never stand around signing autographs for people and I have the worst time falling asleep outside of my own bed. Guess that's why I'm better suited to be a teacher. Well... that and the fact that I don't have the skills to play professional baseball.
September 4, 2019 at 1:10 AM

Baltmoss68 said…
This may be my favorite post ever!! Loved the subject and great writing. Thanks for a unique perspective of sports and the cards we collect!
September 5, 2019 at 4:03 PM