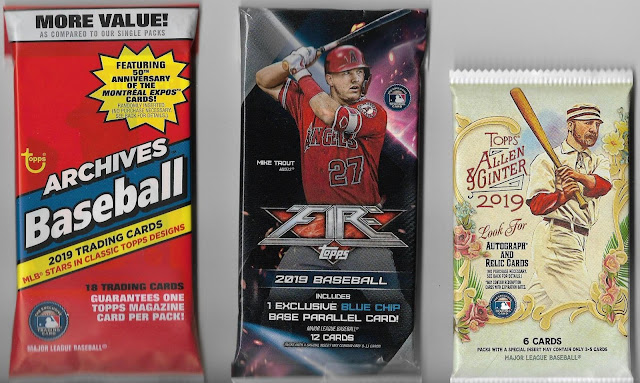 Those of you who frequent the card aisle at the two main big box stores that sell cards probably know about the bottom shelf.

At both stores, the bottom shelf is usually reserved for things like binders and pages or sometimes big boxes of cards (complete sets, for instance). This is also where you can find discounted cards, which almost always are filled with nothing but football or basketball unless you get really lucky.

With the exception of an impulse search of the discount area, I usually ignore the bottom shelf. Merchants aren't going to put anything that I want down there anyway.

They especially aren't going to put loose packs down there -- where little kids can get their grubby hands on them -- and that's what I was looking for this afternoon.

I was actually at Target to get a few decorative items for the card room. I'm still waiting on some drawers to house my card packaging materials, which will officially complete my room. So in the meantime, I looked for some picture frames and such to dress it up.

Then I ambled over to the card aisle. I just wanted a few loose packs or maybe a rack pack. No blasters. I'm probably done with blasters for the year now.

But for the products that I desired, it was blasters or nothing. None of the rack packs had anything I wanted (it was all Series 1, Series 2, Heritage, Opening Day or Donruss). The loose packs were almost non-existent, Series 1 and that's it. I started to get indignant: what kind of day and age are we living in when we can't even buy a loose pack of cards?

Then I looked down and spotted something.

A few random packs were tucked between a couple of boxes on the bottom shelf. One pack of Allen & Ginter. One pack of Archives, which was only available in blaster form anywhere else. And one pack of Topps Fire, which was nowhere to be seen anywhere.

Well, that's meant to be.

I bought all three. 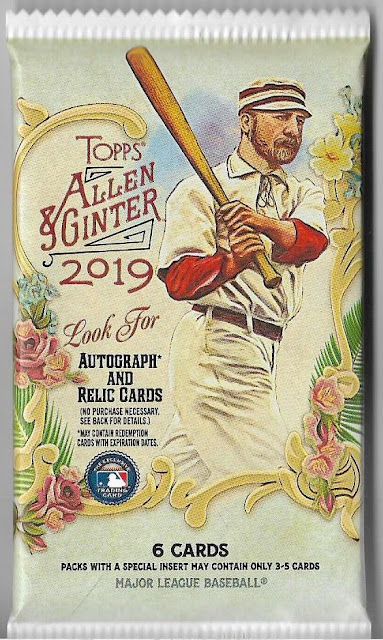 The Allen & Ginter pack was a dud. 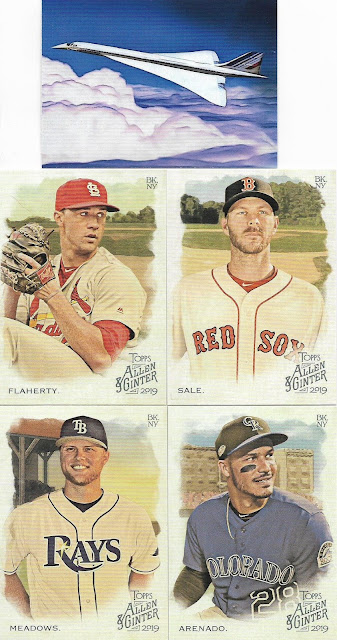 The pack said six cards within and I pulled only five. It also says that packs with a special insert may contain 3-5 cards. The Concorde card is cool but I wouldn't call it a special insert. I've pulled 3 or 4 cards from that insert set already.

Also, every other card except for Nolan Arenado was a dupe. 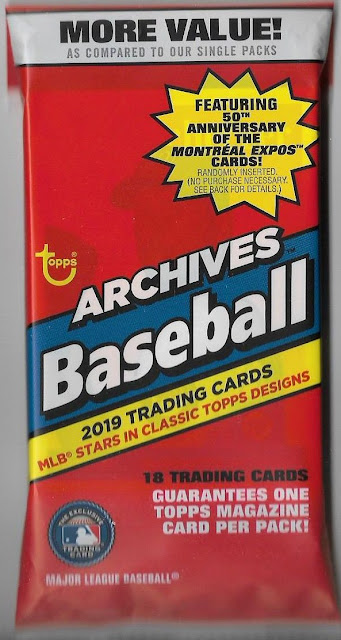 I was quite pleased to see this sitting unattended on the bottom shelf. Just from the shadow of the card on the top of the stack, I could tell it was Max Scherzer. I must have his silhouette memorized. 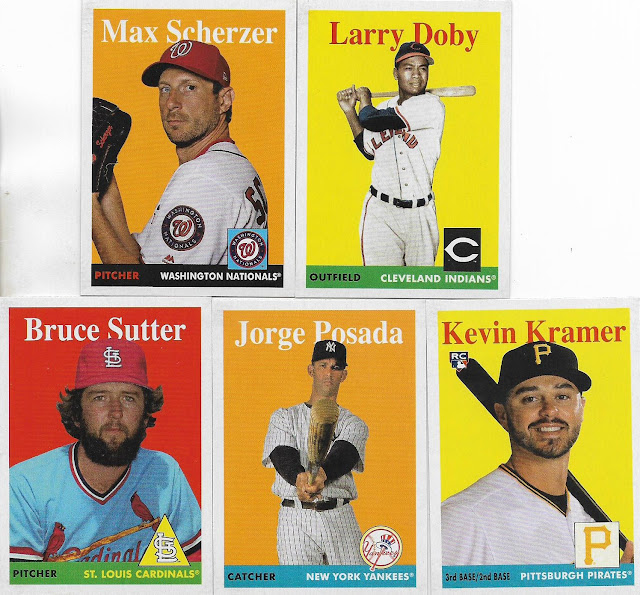 Yup, it's Scherzer. And we still have to be getting cards of Posada for no good reason. 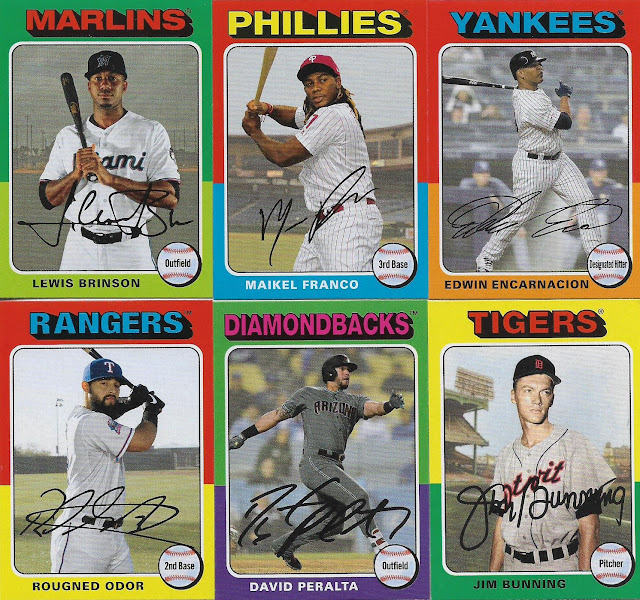 Here we go. I just posted a want list for the '75 portion of the set and all six of these were needs. In fact, I just saw the Franco card on The Phillies Room blog this morning and thought it was a cool card. And now I have it.

(The faded backgrounds, though, are starting to bother me). 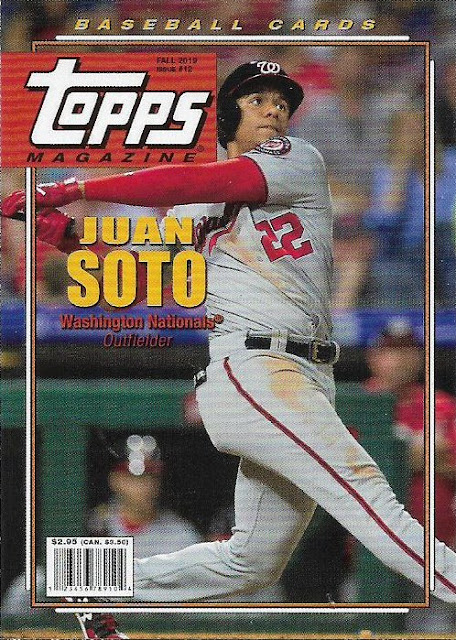 People from a younger demographic are enjoying these Topps Magazine cards. But they don't mean a thing to me. I have never seen an issue of Topps Magazine. I think when it was issued I was busy trying to land a job or get married or something adult like that. Certainly had no time for a card fan mag. 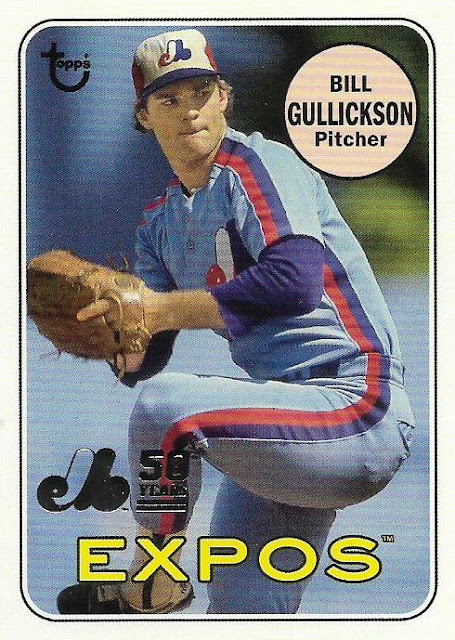 These are cool though. The Expos cards are pretty much the selling point of Archives for a lot of people this year. Seeing Bill Gullickson on the '69 design is a bit odd. I grew up pulling Gullickson cards but they were all on early '80s designs. 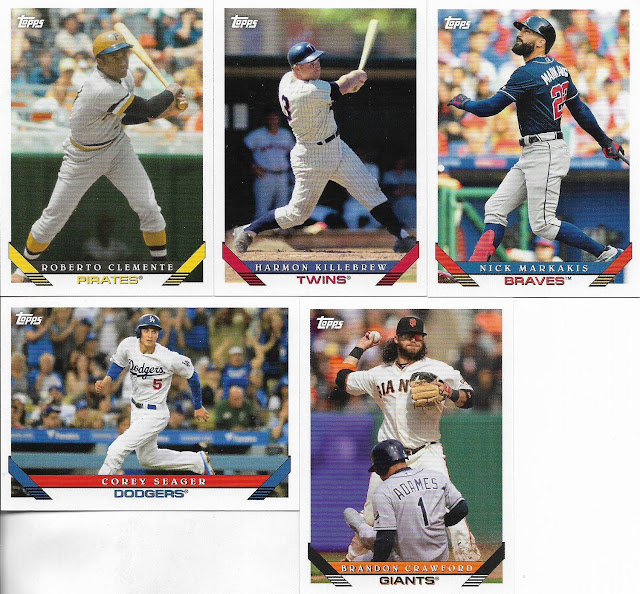 Here are the '93s. A pretty good assortment, except that I pull Brandon Crawford cards way too often. At least I need that Seager.

That was a satisfying pack. 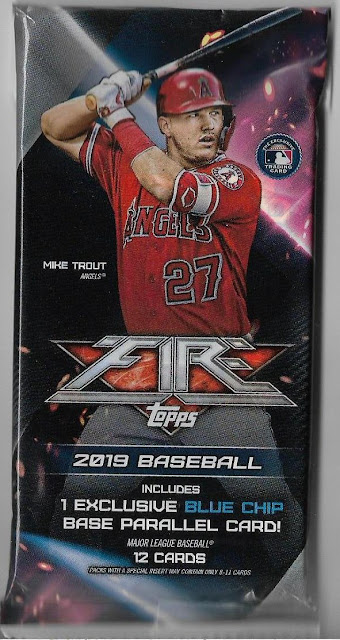 Now for the one pack of Fire in the entire Target card display. I'm thinking some collector must have squirreled this away for a future purchase and I swept it out from under him.

Like many modern sets, I have a love/hate relationship with Topps Fire. I like bright, flashy designs and Fire certainly checks that box. I also like Fire better than its Walmart counterpart, Gallery, which doesn't do anything for me. 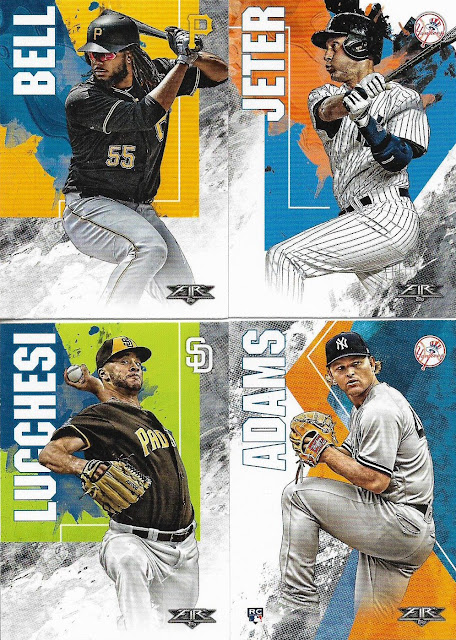 This year's design looks like something you'd see on a motocross poster. But I like it. It's brighter than past Fire sets and it has a pop-art feel. 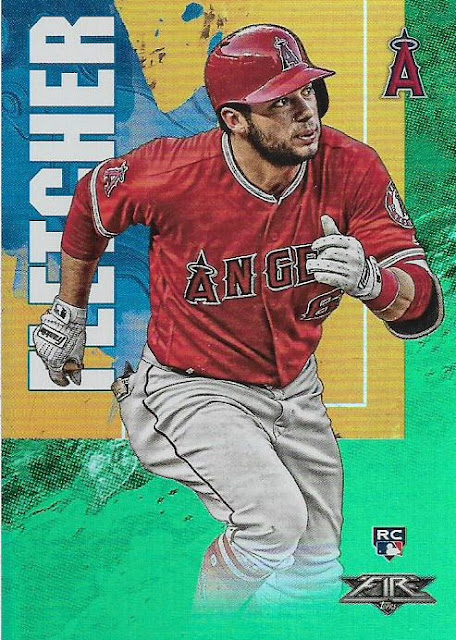 This is one of the numbered parallels. I'm so sick of pulling parallels of teams that I can't trade. Somebody make an amendment to the constitution that you cannot create parallels of players from the Angels (Trout excluded), Marlins, Rays, A's, Nationals and Mariners. 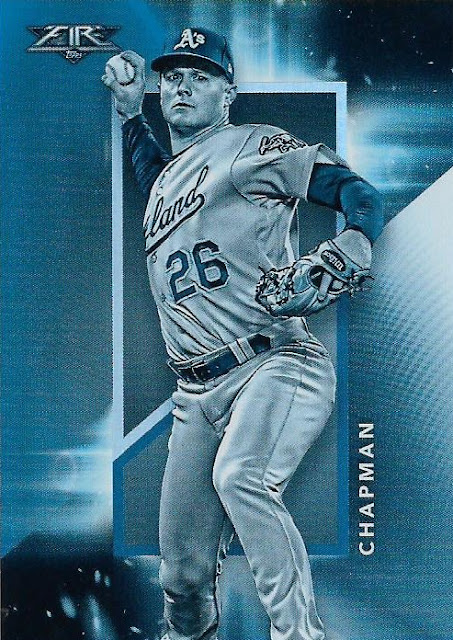 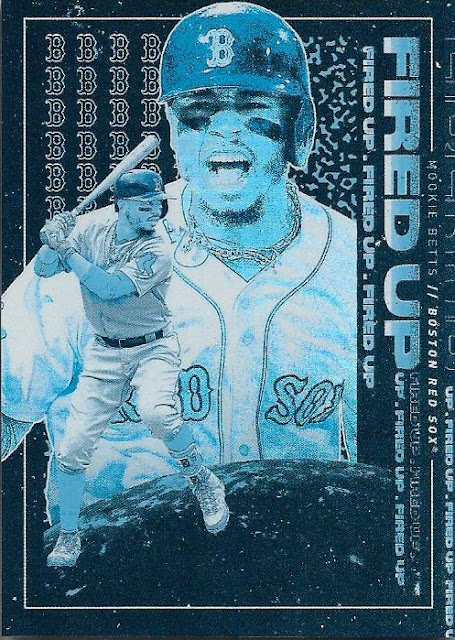 A couple of inserts this year, En Fuego and Fired Up. The Fired Up Betts card looks tremendous. I think these are blue parallel versions of the actual inserts. 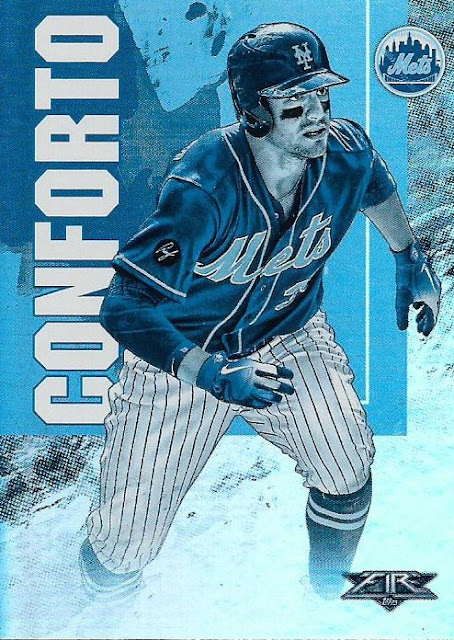 This is the base card blue parallel. "Blue chip" is what they're calling them. 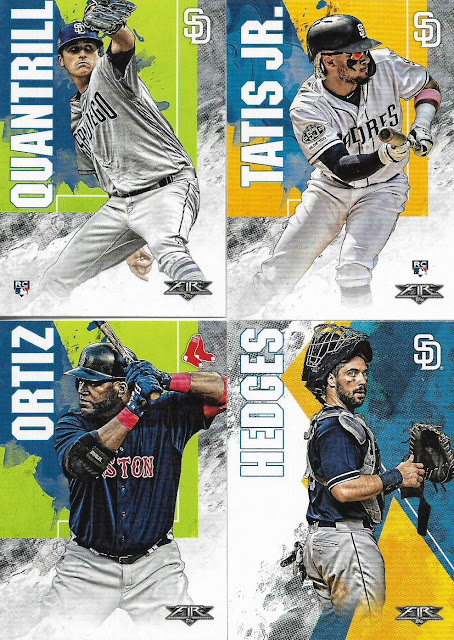 Here are the rest of the base cards.

Have you been keeping track? Did you notice I pulled FOUR PADRES in this pack? What the hell? Should there even be four Padres in the set?

Between the Chapman En Fuego card and the Padres I think I've purchased Fuji's dream pack of the year.

So, it goes without saying that the Archives pack was the best of three on the bottom shelf. But I was entertained by the Fire pack, too.

Sometimes I feel self-conscious when I scan all the rows of the card aisle for several minutes. Some worker is probably giving me the stare down from some camera somewhere. But I just want to make sure I get a full idea of everything that is available.

I also happened to buy one of those three-pack Series 2 blister packs, which was way up on a hook, just because the Pee Wee Reese 150 years of Baseball insert showing on the front has been tormenting me for months.

When I opened the packs, this came out:

Have you ever seen anything more miscut in a modern pack? This is what was known back in the days when I was a kid opening cards as "diamond-cutting," except it is an extreme, extreme example. I never saw anything like this back in the '70s.

You can put the cards together like a puzzle! Shaw's bat is on Greinke's card!

Oh, by the way, I did pick up some picture frames. Hopefully you'll see some completed card room pictures near the end of the month.

Nick said…
I, too, found exactly ONE pack of 2019 Topps Fire at my local Target -- and it was hanging backwards on the rack. I think we might have a nationwide pack-searcher manhunt going on here.
September 9, 2019 at 7:29 PM

P-town Tom said…
I hear that Ack Reinke SSSP is in even higher demand. LOL
Serious though. You might be able to start a crazy run on these types of cards similar to the Shane/Justin Bieber fiasco.
September 9, 2019 at 9:56 PM

Zippy Zappy said…
"Should there even be four Padres in the set?"

GCA said…
Technically, they're parallelograms. Rhombii have all four sides the same length. Just wanted to point that out so I could use "Rhombii". :)

Jon said…
Wow, those miscut cards are really awesome! I can't believe that something of interest to me actually came out of a pack of modern flagship. Also, baseball is usually the only thing that one can find discounted at the Walmart's near me, not that that does you any good of course, but I thought it was still worth mentioning.
September 10, 2019 at 12:39 PM