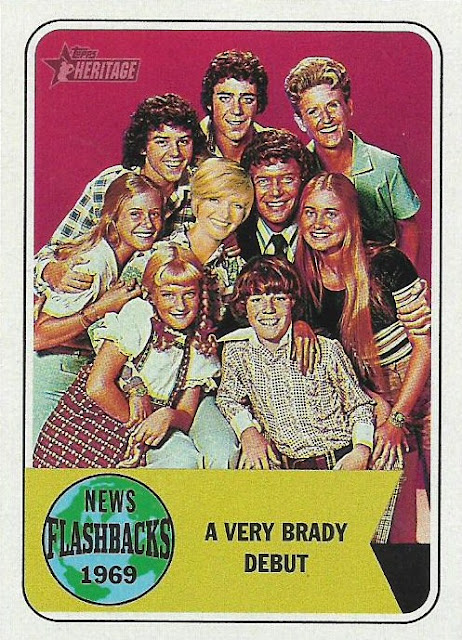 Adult life is all about demands on your time. That's all it is, scrambling from one thing to the next, forgetting important dates or tasks or interests because your brain has run out of room.

I've been dealing with it for years and complaining about it on the blog for a long time, too. But I didn't know anything until I reached 2019.

Ever since my parents' passings, I've been attempting to catch up. There's still plenty of aftermath to handle, nowadays it's all about finances. I just got a call on a financial matter because I haven't tended to something basically because I've had no time. At the moment of that call, I felt like I was being pulled in 100 different directions.

I even feel like I'm being pulled in too many directions with my collection, too. With all of my interests, I find it difficult to focus when I have a little cash. Recently I used a portion of my payment from my latest Beckett Vintage Collector article to hit up COMC. What I got back was all over the place. No direction. No real progress. Just me attempting to fulfill a few cardboard demands.

But let's go ahead and see them. 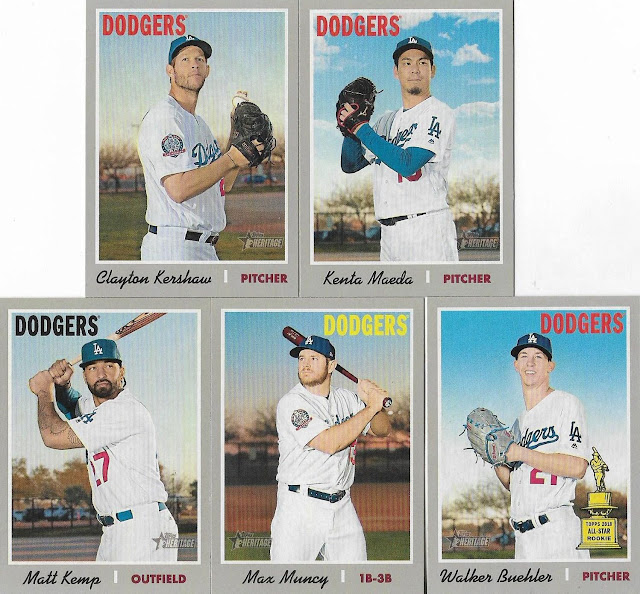 Here is proof that I'm a bit too flustered. These are the five Dodgers short-prints in Heritage this year. Yes, five.

I bought all five. I needed only three. I had the Kershaw and Maeda already but I can't retain any card acquisitions that happened in 2019. Perhaps I should have consulted my want lists but I'm apparently a little too scattered for even that. Fortunately, all the SPs came very cheaply. And the team set is done. That's the most important part. 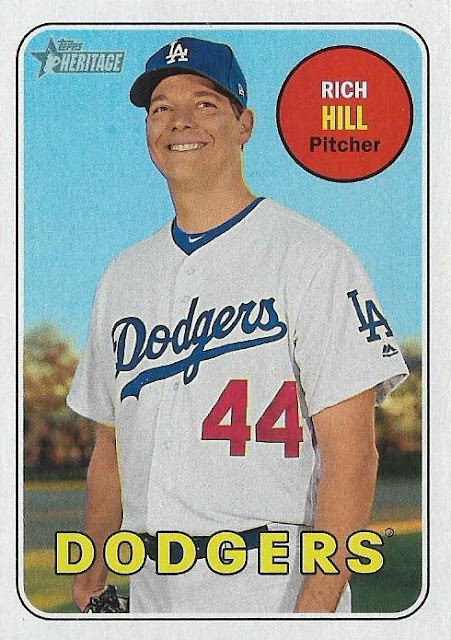 Still working on that 2018 Heritage team set though! This is one of two Dodgers SPs that I was missing, only Hyun-Jin Ryu is left. Rich Hill may be the most fragile pitcher that I've ever known. Maybe he wasn't cut out to be a pro athlete. Perhaps he should have found a nice desk job.

These hot box purple refractors are pretty damn cheap, especially if the players are in low demand. 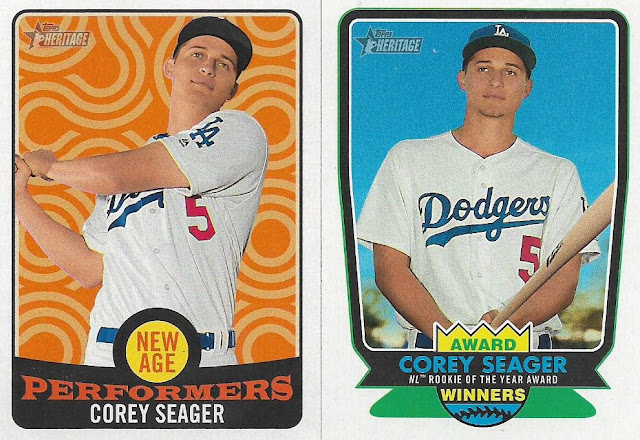 Inserts from 2017 Heritage. I haven't done very well chasing down current Dodger needs ever since 2016 or so. 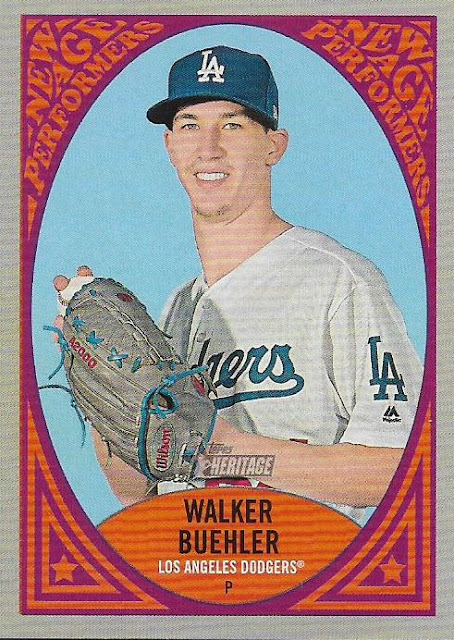 So I made sure to get a Heritage insert from this year before another three years went by.

These three 2006 Eric Gagne cards arrived after a fit of righteous indignation on my part. I don't know why I get so fired up that Gagne cards are so cheap, like he's being sold short or something. I should be HAPPY I can get them so cheaply. 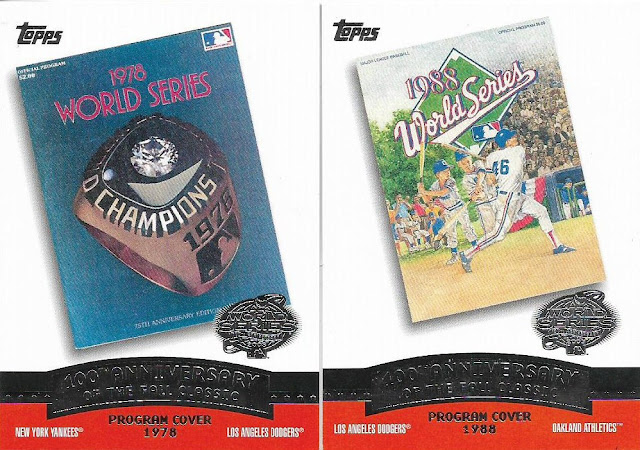 Here we've reached the portion of my order that contains cards from frustrating sets or are frustrating types.

I'm supposedly collecting the 2004 Fall Classics program set, but, man, nobody is making it easy. Too pricey for a 15-year-old insert set. I nabbed both of these for the Dodgers collection (yeah, I need two of all of those). I actually have each of these programs. 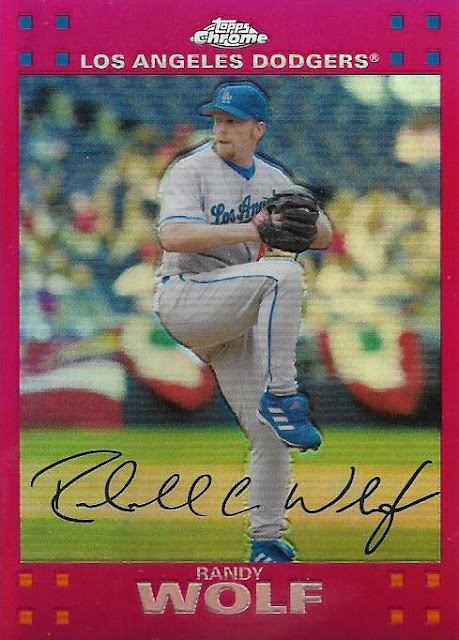 You try to let some time pass on some of the coveted parallels in hopes the price will go down a bit. But those red refractors don't cooperate. I went bottom-feeding and could basically only afford this one. 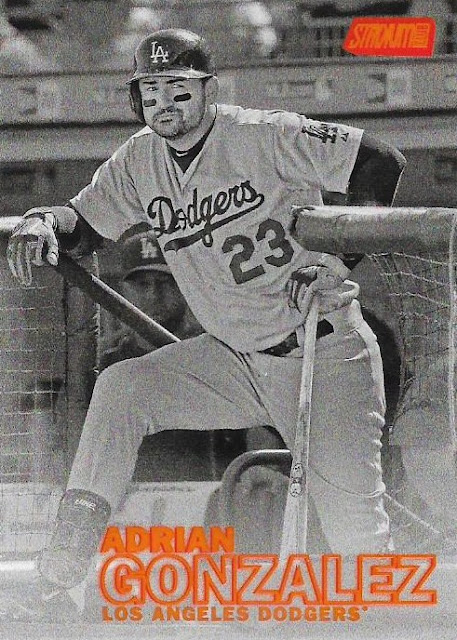 Same deal with these orange-letter parallels in Stadium Club. I adore these. But they just seem unattainable. Gonzalez's facial expression represents my opinion of all of this. 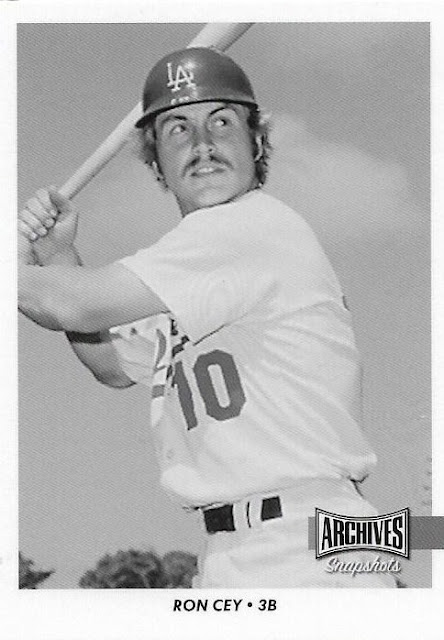 Every once in awhile there is a Ron Cey card that is not an autograph or relic that I don't own. Maybe I should discount parallels too, such as this one, but I can't do that. Welcome, Penguin! 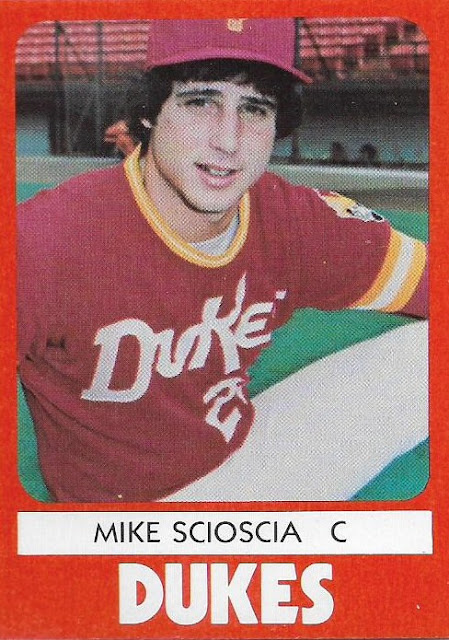 This was the most expensive of the very fine 1980 TCMA Albuquerque Dukes cards that I was missing. I'll double-check what's left but I think it's all minor characters (get it?). 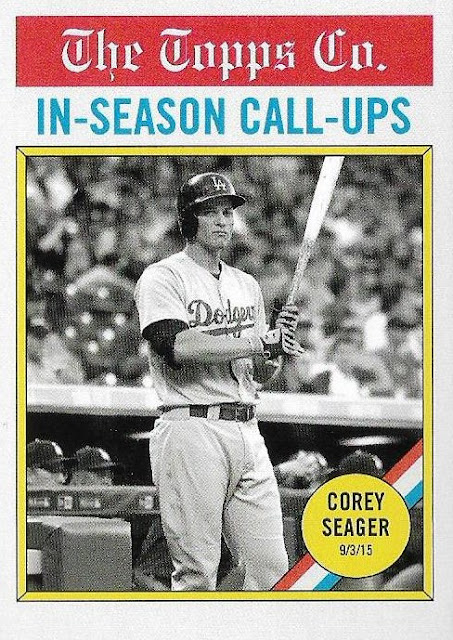 I've mentioned before that the online-only Throwback Thursday cards appeal to me somewhat. But I can't possibly get them all so I limit it to designs that I find appealing or that hark back to my childhood. Here is one that resembles the 1976 Topps All-Time All-Stars, which I was pulling as a 10-year-old. 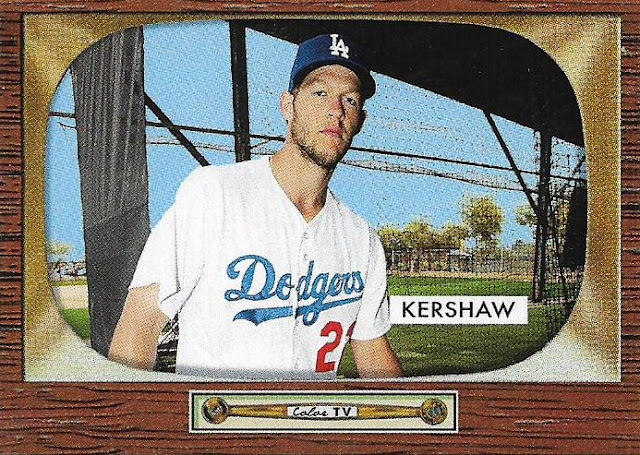 Here is another one, Kershaw on the 1955 Bowman design. You've got to like that. 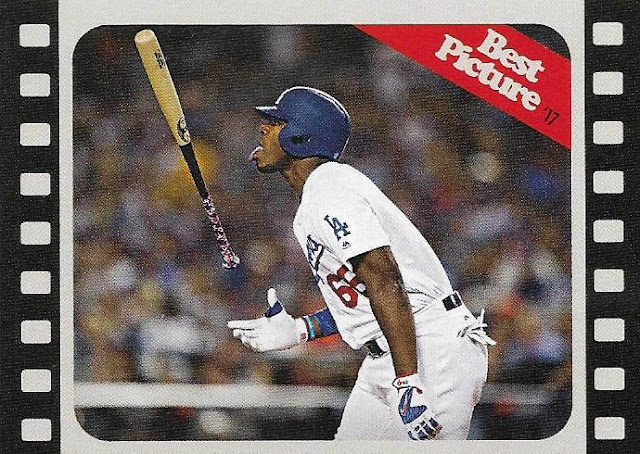 This is phenomenal. Tongue, bat flip and all on the 1976 King Kong set design. Mercy. 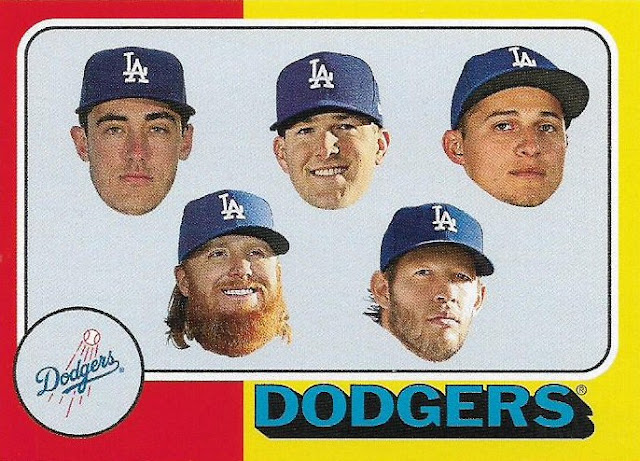 Of course you know I had to get this thing. It's about as far from a 1975 Topps tribute as you can get while still being one. This sort of mimics the Chicago White Sox team card from that year, except there are a lot less floating heads and there's no way there was any team logo on '75 Topps.

Throwback Thursday card backs are abysmal and Topps doesn't even bother to identify the floating heads on the front. Most are easily recognizable although Alex Wood might offer some question marks. 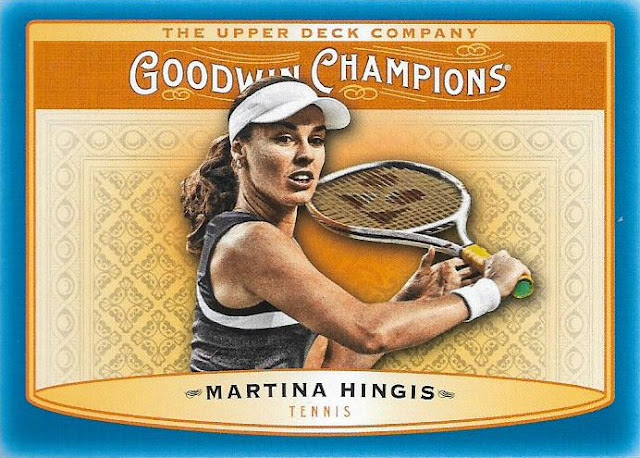 My latest Martina Hingis card. This is beautiful. I know nothing about 2019 Goodwin Champions but heavens, those blue-border parallels. 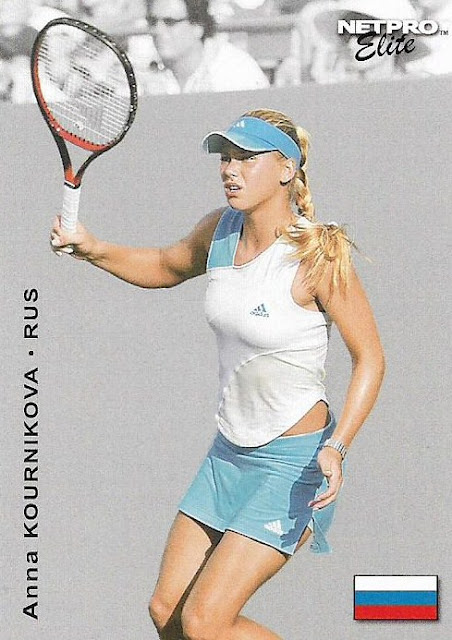 And since I got a Hingis I had to get her old doubles playing partner, too. 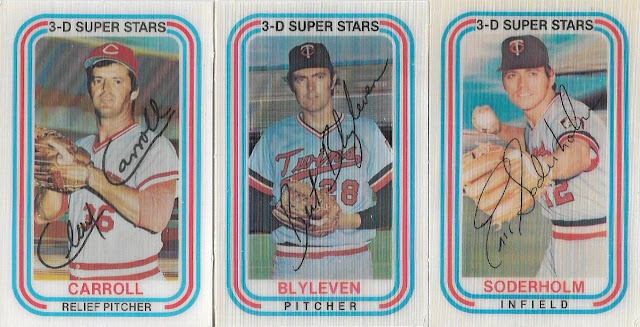 Three more for the 1976 Kellogg's completion quest! I'm now down to the final 10 to finish off this set. That's a good thing because I'm starting to get itchy about my next Kellogg's completion attempt, which will be the 1977 set -- the first Kellogg's set that my brother and I ordered off the Frosted Flakes box.

The last four items aren't even cards but I really love them a lot. 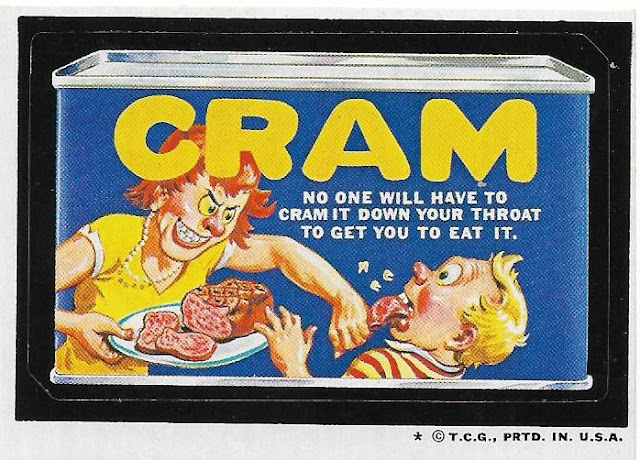 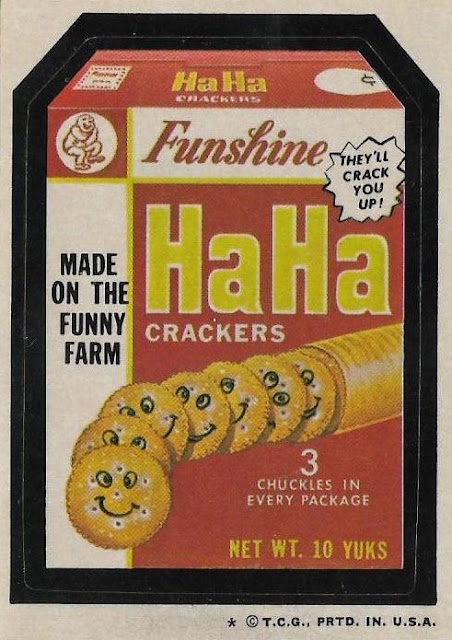 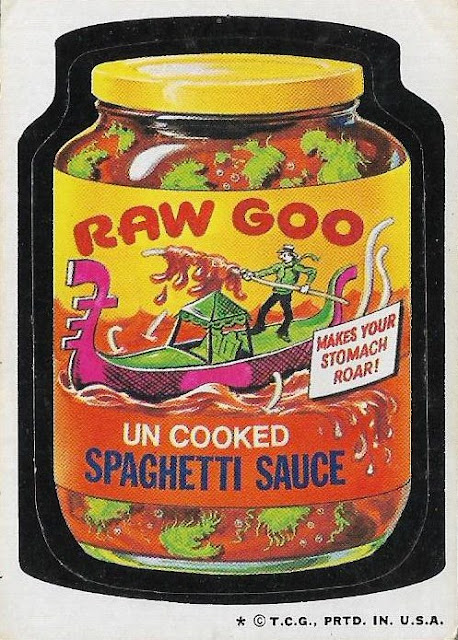 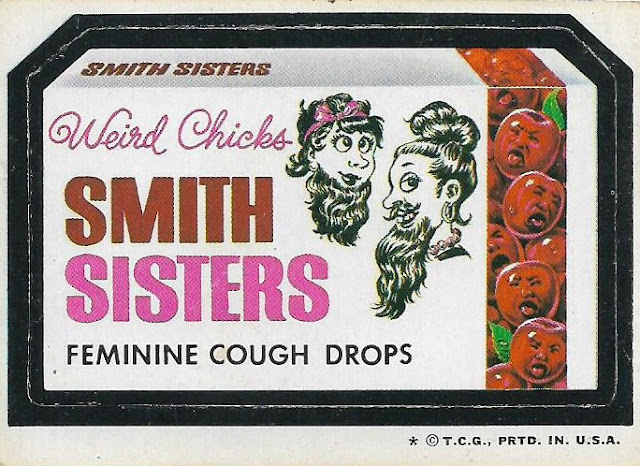 There are very few collectible items that make me swoon. The short list is:

Wacky Package stickers was the other pack-enclosed item besides 1975 Topps baseball cards that I bought that spring and summer of 1975. All four of the above stickers were ones I saw that year and I could not get enough of them.

This officially begins my quest to get more Wacky Packages from the '70s, especially from the 73-74 period.

It also means I'm pulling myself in yet another collecting direction.

But unlike those other aspects of life I can never get to, this is a lot more fun.

Johnnys Trading Spot said…
My first collection was Wacky Packages, loved them then and have most of them too, the old and new.
September 16, 2019 at 8:11 PM

Mike the History Teacher said…
It looks like you bought a bunch of different things that you like. I know the feeling. That's what collecting is all about.
September 16, 2019 at 8:30 PM

CrazieJoe said…
Always nice to get cards you like, even if a bit from different collections you are working on.
September 16, 2019 at 9:08 PM

Billy Kingsley said…
I literally went by the location of the Smith Brothers cough drop factory less than 24 hours ago. It's all overgrown and the building is gone, sadly.
September 16, 2019 at 9:09 PM

Nick said…
I love, love, love the Throwback Thursday cards. The price is too steep for me to buy them direct from Topps, but I always prowl COMC for cheap ones. That Seager is among the ones I've nabbed.
September 16, 2019 at 9:59 PM

Fuji said…
As much as I love this hobby... I completely understand where you're coming from in regards to your collection going in multiple directions. And at times, it can be kind of a pain. Sometimes I wish I collected only a handful of things.
September 17, 2019 at 11:54 PM

BaseSetCalling said…
An easy way to bargain hunt on COMC is to place a too-expensive card on your watch list and wait for it to be placed “on sale”, which might happen at any time. And these days they have some organized mass sales events, like on Black Friday weekend, and others now.


That technique can turn up some amazing deals, and also bring a too-high priced card back to a realistic level compared to its checklist mates.
September 20, 2019 at 10:57 PM