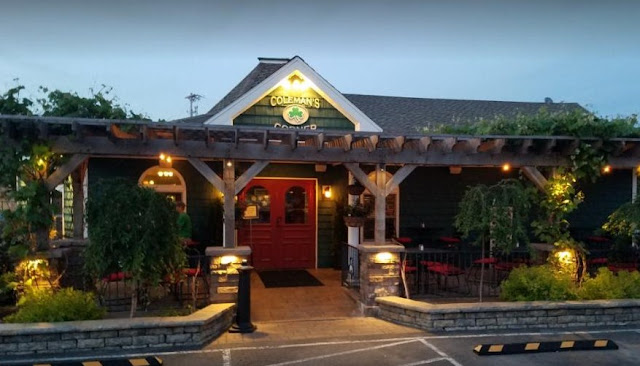 For the second time in the life of this blog, I enjoyed a nice meal over cards with a fellow collector.

I've chatted over Buffalo wings with Angus of Dawg Day Cards several times after card shows as we relived the glory of our cardboard conquests.

Yesterday was a little less heroic. Just a pleasant meal at a local Irish restaurant with another guy named Greg, who wrote a couple of card blogs years ago -- Lake Effect Baseball Cards and Nearly Mint -- but I've also known for a long time on Twitter.

Greg was accompanied by his wife, Megan, who I was also familiar with from Twitter. It's always cool to see people in the flesh who you've communicated with so many times only online. You know their interests and hopes, aggravations and joys, yet you've never talked face-to-face.

I finally got to do that with Greg.

Back in the old days, he would write about his pursuit of the 2008 Topps framed silk cards and it was interesting to hear that he's still at it, only three cards left to go in the 200-card set. He provided me with many cards during my first couple of years of blogging, some of my first Dodgers relics and first late 1990s Dodgers cards.

Later he showed off his supreme generosity by sending me a box of 2013 Panini Hometown Heroes and once an entire binder full of card wants.

I've blogged about all of that, but never met the man.

So it was good to catch up and discuss their recent vacation travels and all of the ballparks they've visited. The meal was good, which is always a relief as I don't want to recommend an out-of-town visitor something gross.

Greg is collecting the 1973 Topps set, slowly going back in time through the Topps sets. I gave him a couple of '73s, although I don't have many extras as I'm still chasing completion of that set myself.

It was a nice, leisurely time. They were a bit weary from traveling, and we talked more about other things than cards.

But this is a card blog, so I have to show at least a card or two. Fortunately, Greg handed me a couple cards before we walked into the restaurant. I knew they were coming. 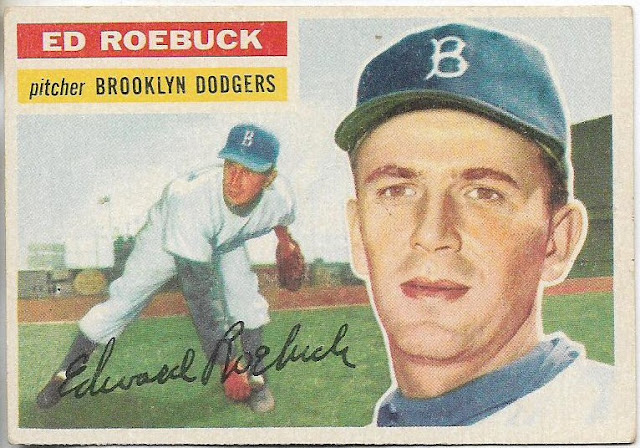 But this Roebuck item is useful because the one I had sported is one of those crossed-out name varieties as the collector tried to pretend Roebuck was Don Drysdale. 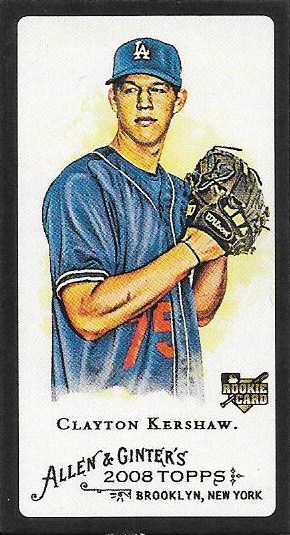 That's the other card. I pride myself on having accumulated most of Clayton Kershaw's 2008 rookie cards. I was able to nab them before most collectors knew who he was. But this black-bordered mini of rookie Kershy escaped me.

Its is now Clayton Kershaw card No. 676 in the collection.

Yesterday was like connecting with an old friend. We've enjoyed our time on Twitter through the Cubs' championship days (he's a Cubs fan) and the Dodgers' almost-but-not-quite World Series titles. But it's nice to revisit our roots. Greg says he just has too many interests to stick with a blog and I feel like that's the way it is for a lot of people. I'm one of the odd ones.

But fortunately, we met when he was blogging. That online meeting led to an honest-to-goodness meeting in person with a fellow collector.

Those are always the best.

Fuji said…
That's really cool that you got to hang out with another blogger. Both of those cards are some really nice additions to your collection. I actually hung out with a blogger (Dan @ The Other World) yesterday. It wasn't over food, but we stood around and talked about cards at the card show yesterday. That brings the running total of meeting four bloggers in person and one famous blog commenter.
September 29, 2019 at 9:51 AM