Look inside the locker 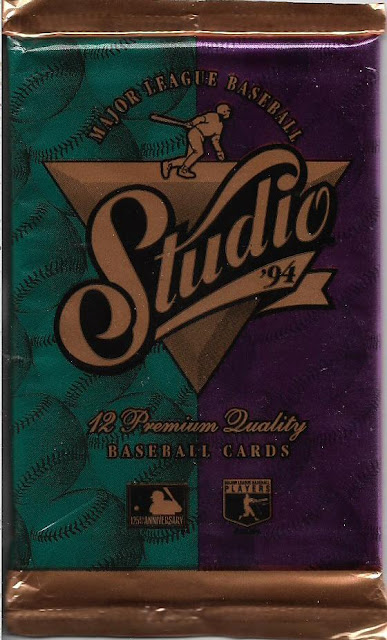 I decided to open one of the packs that was sent to me by reader Jonathan quite awhile ago. It's been sitting waiting to be opened -- in a home that never leaves packs unopened -- for quite some time.

And when I suddenly realized that there are Dodgers inserts that I need from this set, well what am I doing? Let's get this thing opened!

The 1994 Studio set is slightly more appealing to me than previous versions of the set. Even though the back features trimmed down personal information when compared with earlier sets, the fronts are cool. 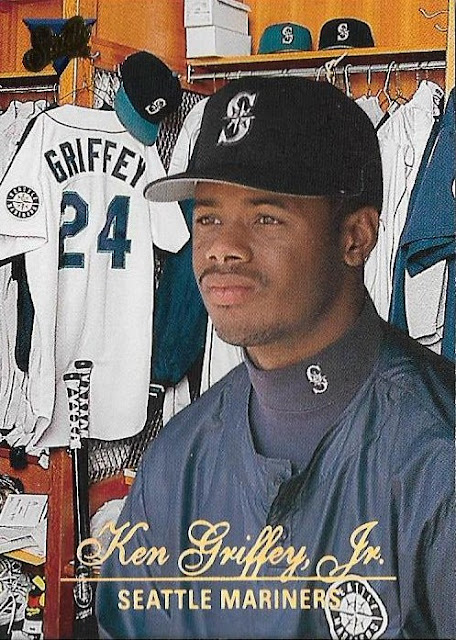 Lockers! The players are placed in front of their very own lockers!

From a fan's perspective this is quite awesome (from a sportswriter's perspective, it isn't so awesome, trust me). You get to see what's sitting in a major league player's locker!

For example the first card I pulled out of the pack, No. 101, Ken Griffey Jr. You get to see his various uniforms and caps. Very '90s there, Junior, with the teal. You get to see his taped-up bats. There are a couple of white boxes on a shelf above him that might contain baseballs (or, maybe baseball cards?). Down in the left corner looks like a pile of stuff, including some letters, maybe from fans?

I thought it would be interesting to see what I could find in the lockers of each of the players that I pulled from this pack.

One other thing before I continue. My guess is they didn't set up each player in front of their locker. The players' photos were probably taken separately and superimposed on a photo of their locker. Card photographers don't have quite that kind of clout. 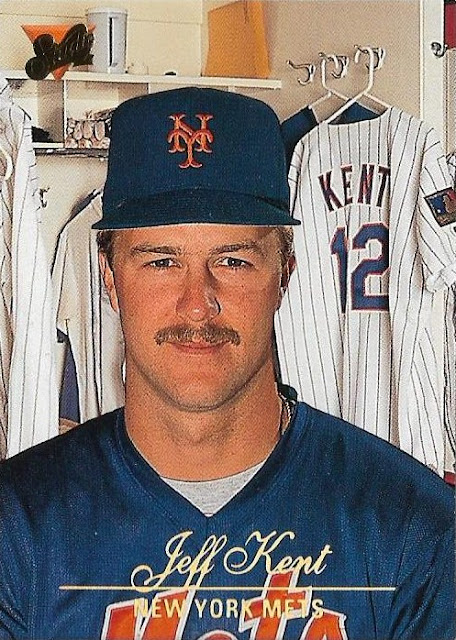 I covered a couple of Kent's games when he was in the minors. Other than a few uniforms, all I see behind Kent is a plastic cup or container and, gee, that sure looks like an envelope you mail baseball cards in. 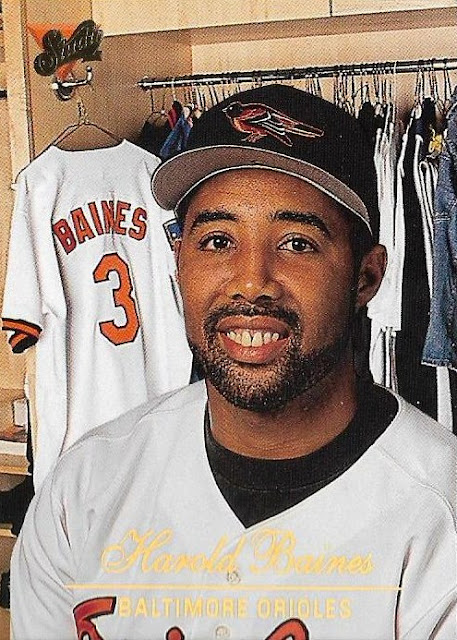 Nothing but uniforms behind Baines, except for some sort of denim thing off to the right. On some of these cards I notice the upper shelf has been cut off. Or maybe there is no upper shelf. But I'm automatically suspicious that they're leaving stuff out. 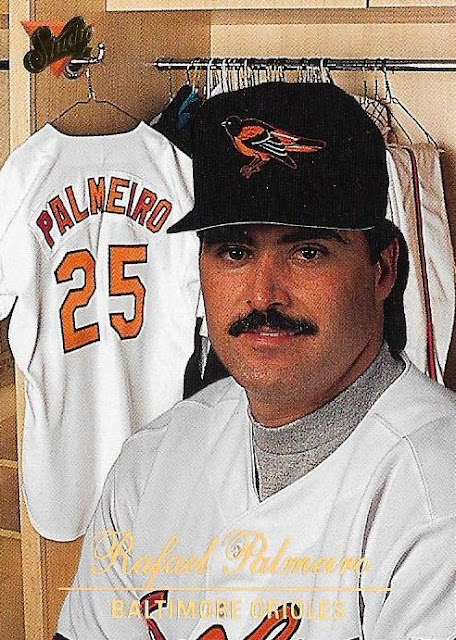 Like this guy. They have to be cropping stuff out with this guy. Just a uniform and pants. Yeah, sure, Raffy, that's everything in your locker. 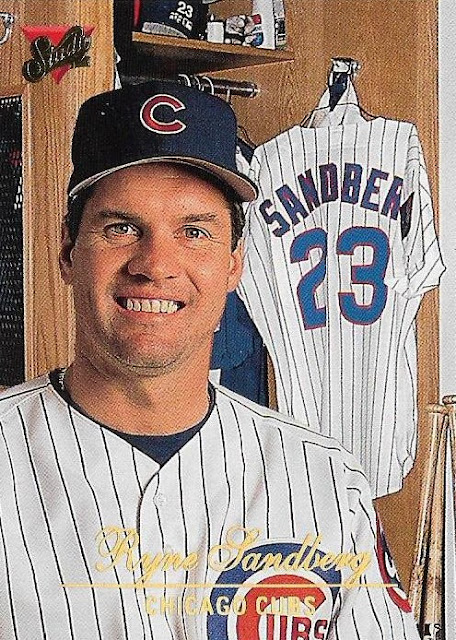 That's more like it, an upper shelf to peer into -- like staring inside a neighbor's medicine cabinet. Aside from bats and a uniform, Sandberg appears to have various lotions and ointments on the upper shelf. 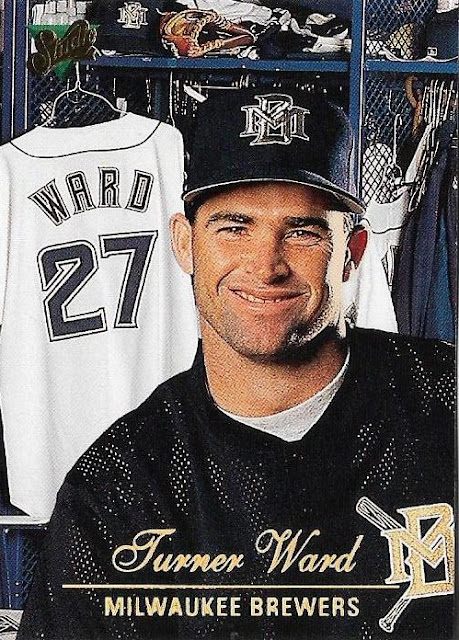 Now that's a locker. Ward is currently a hitting coach and that just looks like a future coach's locker. All of his equipment just jammed into a tiny rectangular box. 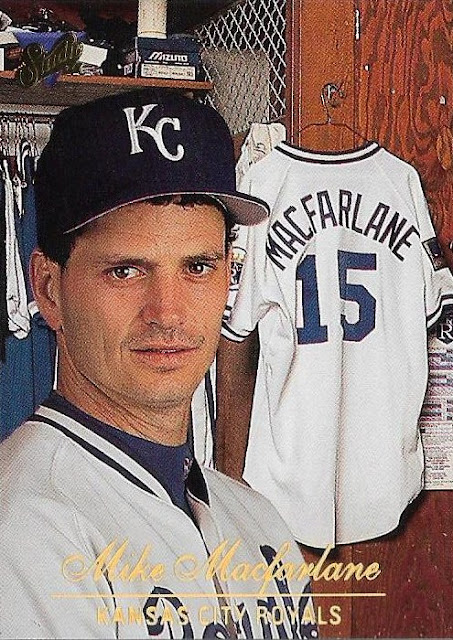 There appears to be some sort of lineup card behind Macfarlane's jersey. Up on the shelf is a Mizuno shoebox. Mizuno is a baseball equipment company. 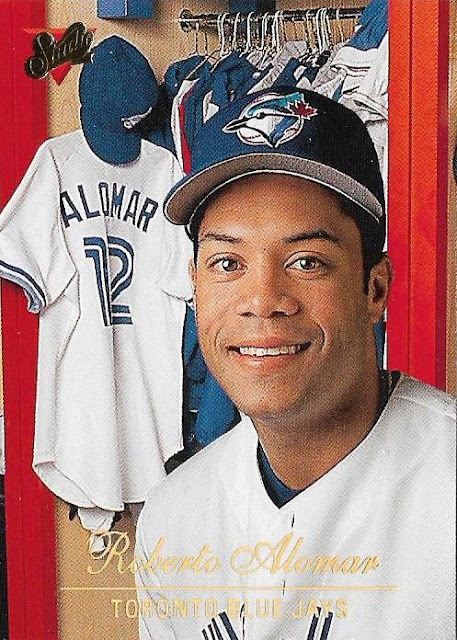 Nothing but baseball clothes. What's above your head, Roberto? 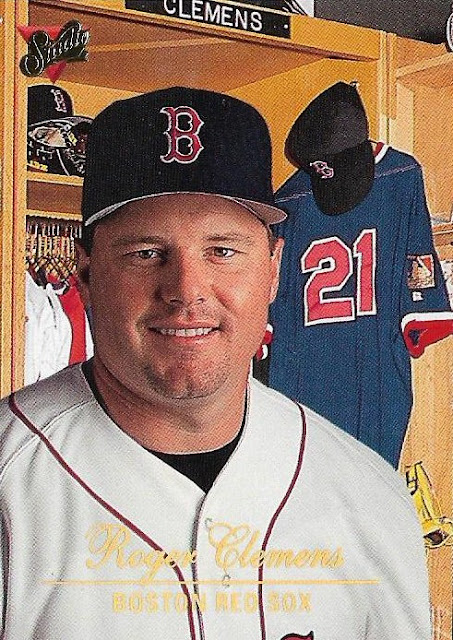 That looks very neat, although the sizeable caps they wore back then sure blocks out a lot. At least Clemens' nameplate is showing. 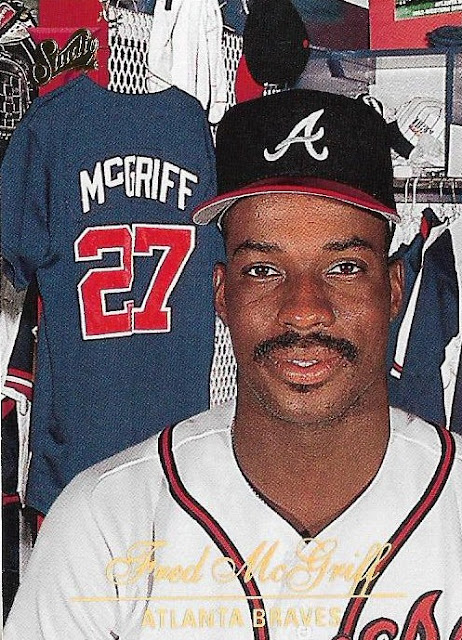 I see a lot of baseball clothes. 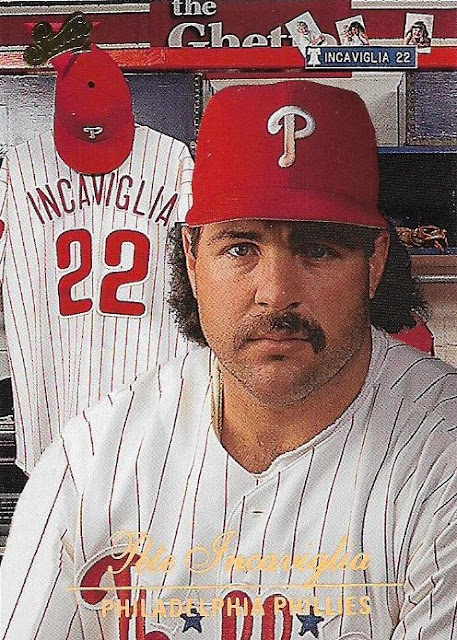 This is the most interesting locker for me. First, if you don't know how to spell his name, it's not only there on the jersey but also on the name plate. Second, does that say "The Ghetto" behind him, and if so, what's that mean? Finally, there are three pictures or photographs of little kids positioned behind the name plate. Maybe his kids? 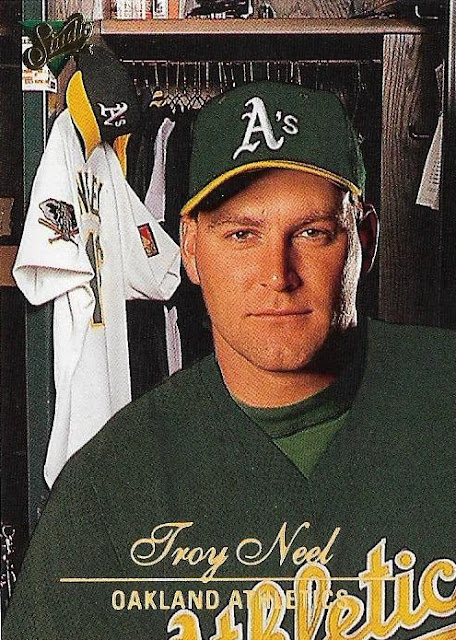 #5 - Troy Neel, Athletics (nothing of nonbaseball interest on the back of his card)

Ho-hum locker. If only the top part wasn't cropped out.

The 1994 Studio set was a little bit special, not only because of the lockers but because it was issued in fewer quantities than previous Studio sets.

The inserts are still a little tricky. Even with all the '90s Piazza inserts I've accumulated over the years, I still need the ones from the Editor's Choice and Silver/Gold Stars inserts.

Mike the History Teacher said…
I like interesting backgrounds in baseball card photos, so I also like this more than any other Studio set. I think you're right about the players' photos being superimposed over the lockers. While the lockers are brightly lit on all the cards, a lot of the cards have a heavy shadow over one side of the players' face, suggesting they were photographed separately.

I wonder if Incaviglia's card holds a record by showing his name on the front three times.
September 8, 2019 at 8:42 PM

Brett Alan said…
Yes, the sign says “The Ghetto”. Apparently the 1993 Phillies designated the area with the most rowdy veterans—besides Inky, they included Kruk, Daulton, Mitch Williams, and of course Dykstra—by that name. https://books.google.com/books?id=l8OyQuA2nwoC&pg=PA103&lpg=PA103&dq=the+ghetto+“mitch+williams”&source=bl&ots=9KZCBZ2z1S&sig=ACfU3U3NLgEagii3sW-9Lmro8rMHeYGyJA&hl=en&sa=X&ved=2ahUKEwin9NmG2MLkAhWQiOAKHRR8BKwQ6AEwA3oECAkQAQ#v=onepage&q=the%20ghetto%20“mitch%20williams”&f=false

CrazieJoe said…
Definitely a great background design which provides some nice insight into the players, which fit well with Studio.
September 9, 2019 at 7:55 AM

GCA said…
Looks like the Orioles have cabinets above the hanger spaces, so you can't see what's up there anyway.
September 9, 2019 at 8:45 AM

Nick said…
I never really thought of it until I read this post, but I do see less of '94 Studio than most other years of the brand. I don't think I have any of the cards you pulled in your pack.
September 9, 2019 at 7:32 PM

Fuji said…
Although I much prefer action shots over portraits... I like the locker idea. I've seen these packs before, but I'm not sure if I've ever taken the time to bust open any.
September 9, 2019 at 9:35 PM