If I could complete all my team sets like this 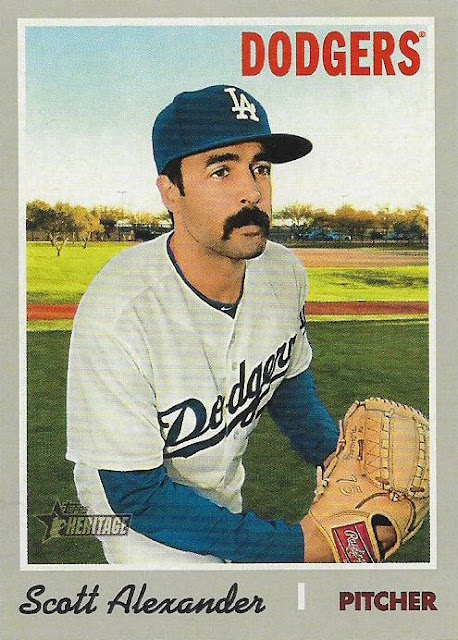 If you were gallivanting on Labor Day and nowhere near the blogs, I invite you to read my post from yesterday.

It's one of those observational, thinking card pieces that don't get the attention that they did back in the glory days of card blogs. Card blogging seems to be a lot more like Facebook these days. But I won't stop writing those kinds of posts.

Anyway, today's a notable day because I completed a team set! Those should be holidays in themselves. Also, it was a 2019 team set. And a very recent team set at that.

I completed the 2019 Heritage High Numbers Dodgers team. And I didn't have to purchase a single one of the cards. Oh, if I could only complete all my team sets like this.

I recently received envelopes from Rod of Padrographs and Doug of Sportscards From the Dollar Store that both contained Heritage High Numbers needs. Combine them together and -- *gasp* -- they completed the whole team set!

Here are the cards from Rod: 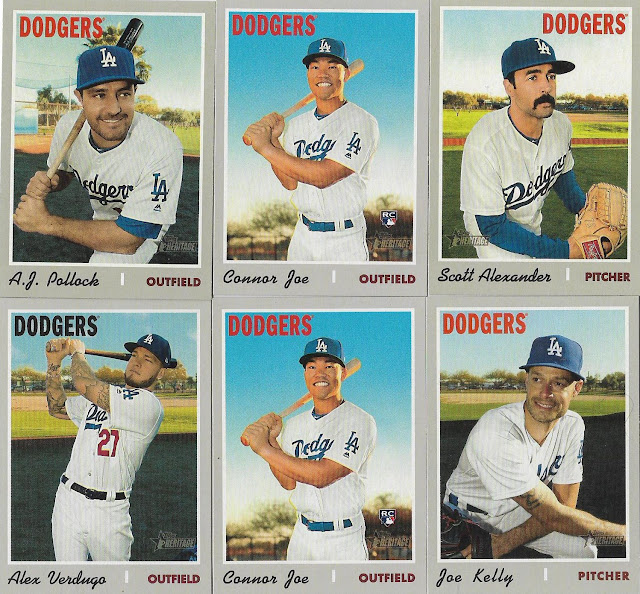 Two cards of Connor Joe -- I'll get to him in a minute.

And here are the cards I received from Doug: 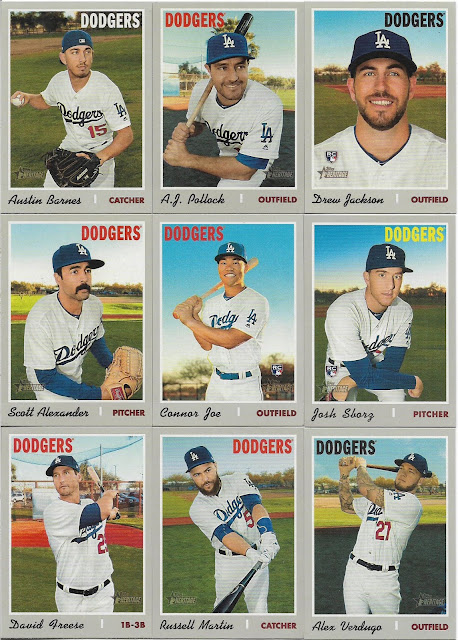 And that's it! The set is complete!

It's not really an inspiring crew. There are some definite 2019 contributors like Freese, Kelly, Martin, Pollock and Verdugo. And you can see the point of some of the others. Josh Sborz sneaks in by getting called up for brief visits including just the other day.

But the Connor Joe and Drew Jackson cards are puzzlers and continue Topps' annoying habit of including undeserving young players in sets just so it can plaster a rookie card logo on the card.

Joe, who played briefly with the Giants last season, has spent all of 2019 with Triple A Oklahoma City. He's done pretty well, but he hasn't played with the big club once, which should be a condition of appearing in a set unless that set is Bowman.

Jackson also has spent the season in Oklahoma City. No L.A. appearances. Not even a hint of him coming to L.A. (that .209 average might have something to do with it). Yet, here he is in Heritage High Numbers.

Who would be better candidates to replace those two non-Dodgers?

1. Where the hell is Pedro Baez?

I know Topps doesn't like recognizing relief pitchers, but Scott Alexander and his magnificent mustache is in the set. Baez is arguably the Dodgers' most reliable relief pitcher and has appeared in 63 games.

It seems that Topps this year is punishing players who are arrested for domestic violence. Addison Russell vanished from a couple of sets this year and now Urias, who was charged in May, which would be in time for Topps to make such a decision. If Topps is actually doing this it makes me a bit nervous. Topps isn't in the business of sanctioning players or shouldn't be. It's supposed to feature the players who have participated in major league games. Urias, who is just back from his suspension from MLB, has pitched in 27 games for the Dodgers, enough to be in a card set, especially over those who haven't appeared with the team this year.

So those are the two I'd definitely choose. You could make arguments for other relievers, Yimi Garcia, Dylan Floro, even JT Chargois. I'd also love to have a High Numbers card of Matt Beaty. He's played in 78 games for the Dodgers this year, Topps, and done quite well.

I know it can't be easy to compile High Numbers these days with all the transactions in modern baseball. The Dodgers are constantly changing their roster, it barely looks like the team that was playing in the spring. Here are some of the players who have appeared with the Dodgers in just the last couple of months, who probably hadn't arrived in time for them to go in High Numbers:

Tyler White, Edwin Rios, Kyle Garlick, Zac Rosscup, Kristopher Negron, Will Smith, Dustin May, Casey Sadler, Jedd Gyorko, Tony Gonsolin, Adam Kolarek and Gavin Lux. Smith was playing for the Dodgers a little in the spring so he could've made it to High Numbers. Heck. all of them are more qualified than Connor Joe and Drew Jackson.

But the main focus should be the set is complete and before I even put my wants on my want list!

Sure there are still inserts and all that stuff but the best feeling is when you finish the base set.

Both packages included other cards. I'll save Rod's cards for later as they touch on some other collecting themes. Here are Doug's other cards:

A nice numbered Panini card of Walker Buehler from his USA Baseball days.

And the Bills start their season this weekend against the Jets, so how about a couple of Bills notables: Josh Allen and Andre Reed! It will be interesting to see what Allen can do with an actual offensive line in front of him.

So, I'm off to add the Dodgers inserts to my Heritage High Numbers want list and that is all!

I'd better do something about those Heritage base needs now.

Jim from Downingtown said…
Heh heh, when you said "...Topps' annoying habit of ___________" I immediately thought "wow, there are so many ways to complete that sentence!

As a vintage-only collector, my "Topps annoying habits" is pretty much a fixed list:
- nonsensical airbrushing
- not being able to tell the difference between living (Dick Ellsworth) and dead players (Ken Hubbs)
- their three 1968 blunders of:
a) forgetting about a third of the team cards
b) screwing over the Astros (1969 too)
c) skipping key players like Reggie Jackson, Sparky Lyle, and Bobby Bonds.
September 3, 2019 at 9:17 PM

steelehere said…
Drew Jackson and Connor Joe were both players that other teams took from the Dodgers in the 2018 Rule 5 draft. Connor Joe (selected by the Reds, released and then picked up by the Giants) and Drew Jackson (selected by the Phillies and then traded to Orioles) both ended up getting returned to the Dodgers because the Giants and Orioles didn't want to keep them on their roster all year.

Topps just pictured them both in their current system (the Dodgers) because they're no longer in the Giants or Orioles systems anymore. As for why they got cards and Will Smith didn't, MLBPA and Topps require a player to be on the 25 man roster before they can appear in a major league base set (though Bowman has a work around for pre-rookie cards that are essentially inserts).
September 3, 2019 at 11:08 PM

Fuji said…
Maybe Topps will bless you with a Heritage High Numbers Update Series and create cards of Gavin Lux, Will Smith, and the other eight or nine players you listed.
September 4, 2019 at 12:07 AM

night owl said…
OK, that explains Smith, but not Baez or Urias. It's just silly to be including players who didn't even play for the teams they're pictured with -- just leave them out.
September 4, 2019 at 1:30 AM

Nick Vossbrink said…
Ahso I was thinking it had to do with Rule 5 and actually being on an Opening Day roster this season. Doesn't explain why Baez hasn't gotten a card but even while the rookie rookie rookie madness is annoying I kind of like the idea of trying to get all the guys who broke into the bigs (even if only briefly) onto cardboard. Listing them with the Dodgers instead of the Giants or Orioles though is really confusing (It's going to be interesting to see what they do in Update here)

The domestic violence correlation is interesting. I can see why Topps would do it—especially while they still want to claim this is for kids. It's also kind of wild that they could be doing that while printing Nazi flags in Ginter.
September 5, 2019 at 9:56 PM