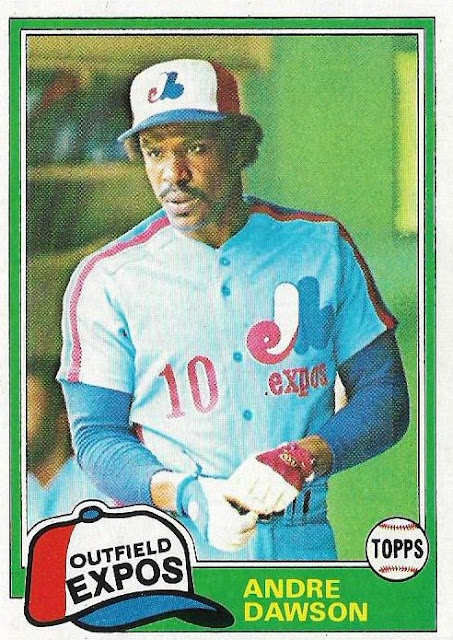 It's been nearly a year-and-a-half since I wrote one of these posts in this series. I'm not tired of it or anything, I just plain forgot.

Well, I screwed up that promise. Also, technically, I should be doing a Team MVPs post on a more current set because I've completed that since I've passed that year in this exercise. I usually go back to handle those completed-set stragglers.

But I won't do that to you. I've already broken one promise to '81 Topps.

So here we are in 1981. This set is one of the last from my "childhood" collecting days. I was a teenager by this point, but I still consider it part of my collecting golden age, which includes all of the sets I collected as a kid. I still had some the same wild-eyed enthusiasm for cards at this point as I did in my younger days, and I could feel that as I went through to determine the best card for each team.

There were a lot more cards that I had memorized and a lot more cards with meaning. Major, weighty cards. Just titans of that time. Practically the most valuable things that I owned. This is the territory we're getting into now with this series. And it's only going to get deeper and heavier the farther back in time that we go.

As I went through the cards, I was saddened by the cards that weren't named the "best." I have real attachment to these cards, something that I can't say for the earlier versions of the Team MVPs series. It really hit home with this exercise.

I often make a big deal about conducting this exercise on the floor as I did when I was a kid, and I've done that a few times. But now that I have a card room with it's very own table, for the first time ever, I determined each team's "MVP" in my card room! 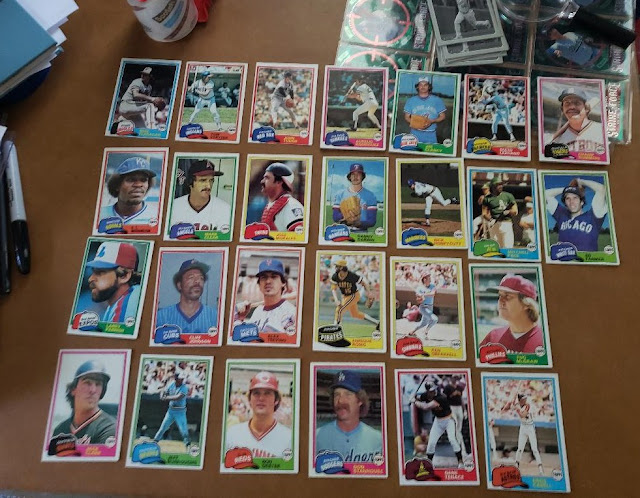 OK, so as is ritual, I've broken down the Team MVPs by the divisions that were in place at the time. And here they are: 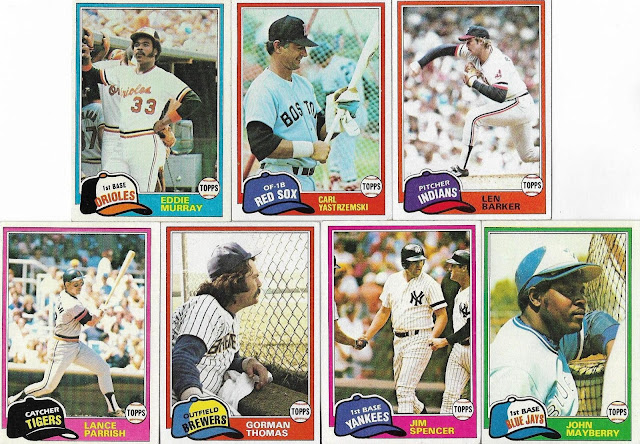 Team with the best cards: Orioles. Easily. And there are teams like the Red Sox and Brewers that feature several phenomenal cards. But you can tell that whoever shot the Orioles cards really knew their stuff (see: Benny Ayala, Dennis Martinez, Al Bumbry, Jim Palmer, Kiko Garcia, etc.)

Team with the worst cards: Tigers. You can hang your argument on the Kirk Gibson rookie, but the Lance Parrish card is about the only interesting card for the team.

Team I should go back and review: Maybe the Indians. I've loved that Len Barker card since the moment I pulled it from a pack in '81. 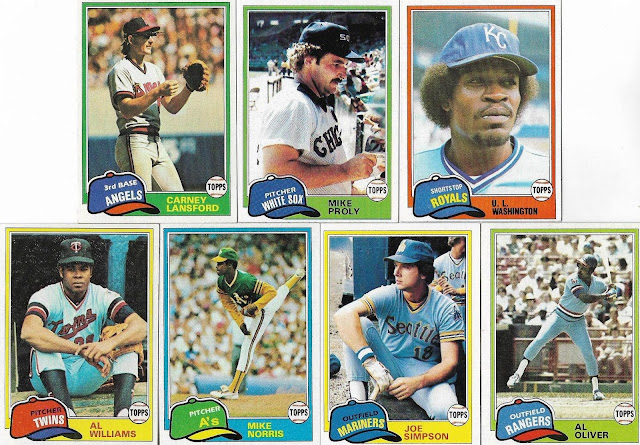 Team with the best cards: Royals or Mariners. Probably the Mariners.

Team with the worst cards: Twins. I did find a Cardboard Appreciation topic from a Twins card in this set, but it was about one of only 2 or 3 enjoyable Twins cards. The Angels were hurting, too.

Team I should go back and review: Royals or Rangers. I am a little too enthralled with U.L.'s toothpick and A.O.'s footstep. Also, I'm prepared to fight to the death over the Mike Norris card, so Tony Armas and the rest had little chance. 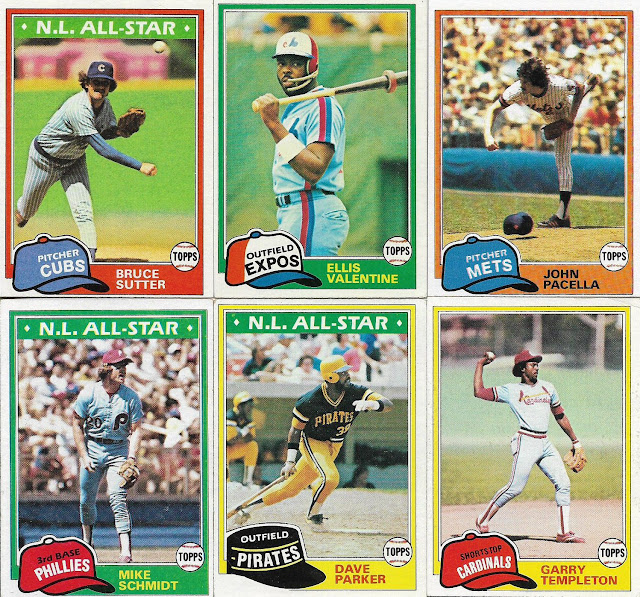 Just a great crop of cards.

Team with the best cards: A tie between the Expos and Pirates. No real surprise there.

Team with the worst cards: The Cubs were abysmal until Sutter came along.

Team I should go back and review: The Pirates. This is the first set where the All-Star logo comes into play and it really adds a presence that I didn't consider prior to this exercise (for example, Mike Schmidt wins over the excellent play-at-the-plate Bob Boone shot just because I though the All-Star banner was so phenomenal with this Schmidt photo). 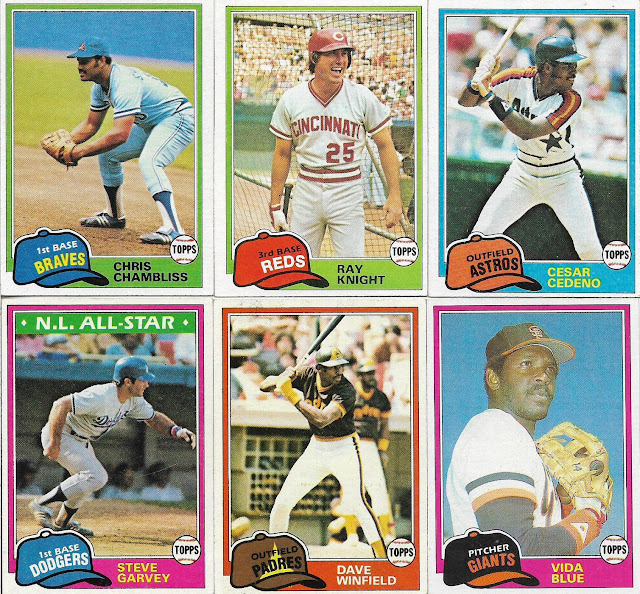 Team with the best cards: Astros. Cesar Cedeno kept knocking off worthy challengers with that devastating presence at the plate.

Team with the worst cards: Giants. The Vida Blue isn't that exciting but it is Vida Blue.

Team I should go back and review: Padres. The uniforms from that time make the photos so enjoyable.


Some too-astute readers may notice that Garvey was selected as the best while in a recent post of the best Dodgers for each year, I chose Rudy Law. That's because I'm trying to be more impartial with this exercise, while the "best Dodger" post included more of my "favorites."

I made several observations while conducting this exercise, beyond what I've already said. 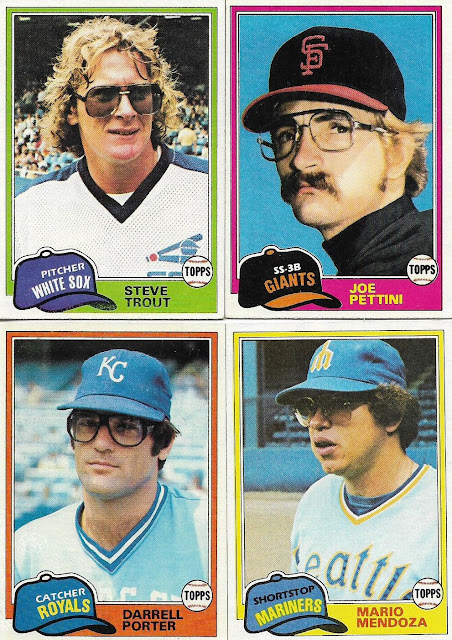 We need to give glasses-wearers from this time an award for putting up with frames like this. Thank goodness I didn't need glasses at this time. I have a difficult enough time looking back on photos of myself from this period. 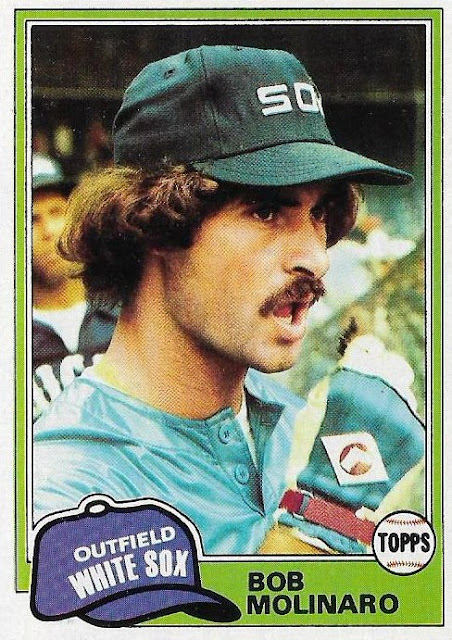 The White Sox feature several enjoyable photos of players chilling around the cage and at least three different shots of White Sox signing autographs. This, however, may be one of the few examples of a player displaying the act of ingesting tobacco. I think that's what that is anyway.

All right, that's it for this episode of the series.

I will try to revisit for the next episode sooner than a year-and-a-half from now. However, with the set I have coming up next, you may want me to take all the time that I need. It's from 1990.

John Bateman said…
This this the first time I ever noticed that the Pirates Cap did not curve like the rest of the other 25 teams. Somehow the Templeton photo is a precursor to the 1983 photos (design).
September 25, 2019 at 8:58 PM

Old Cards said…
Nothing says baseball cards like players chilling around the cage. The Yaz card is the best!
September 25, 2019 at 9:14 PM

Mike the History Teacher said…
That Mike Proly checks a lot of boxes for me ... Old Comiskey Park ... the collared uniforms ... signing autographs ... that intense look on his face ... a random metal folding chair in the background.

Nick Vossbrink said…
As a Giants fan I'm constantly disappointed at how boring the Giants cards are compared to other teams. I know you're inclined not to like them in general but Topps does them no favors through much of the 70s and 80s.
September 25, 2019 at 9:46 PM

Matt said…
The Yaz cards has always been one of my favorites, and then last year someone pointed out that was Carlton Fisk in the background. I never picked up on that, and I love it even more now!
September 26, 2019 at 10:34 AM

Fuji said…
Love seeing Mike Norris receive some love. And that Schmidt card is a classic!
September 26, 2019 at 11:45 PM

Nick said…
I've long loved '81 Topps, and this post makes me love it even more. Numerous masterpieces of stars (Murray, Yaz, Parker, etc.) and several staples of my frankenset as well (Pacella, Valentine). I'm in the minority on this, but I think it's the best Topps set of the '80s. (And I've somehow never seen that Molinaro before -- sure looks like tobacco to me!)
September 27, 2019 at 6:02 PM