November 21, 2018
(Greetings on what's supposed to be the biggest drinking night of the year. This has never been true for me. I've rarely gone out to bars the day before Thanksgiving. Back in college, when I traveled home on this day, I was actually leaving the bars I frequented and the people who joined me there. Who am I going to drink with back home? Grandma? It's time for Cardboard Appreciation. This is the 277th in a series): 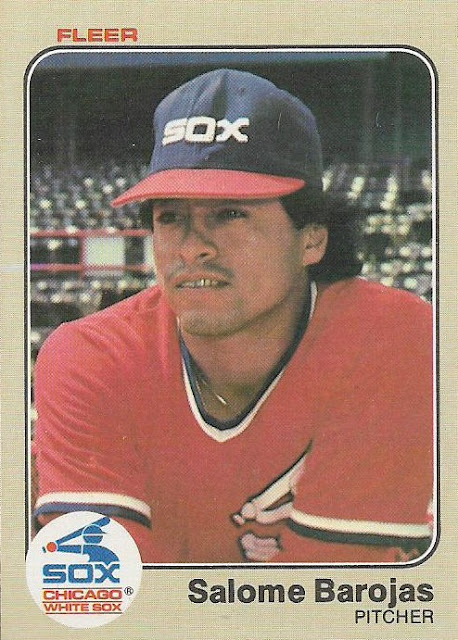 While going through the bounty of 1983 Fleer cards I received recently, I stopped on this card of mid-1980s pitcher Salome Barojas.

A veteran of the Mexican League both before and after his major league career, Barojas pitched for the White Sox and Mariners between 1982-85 (he also appeared in six games for the Phillies in 1988). Barojas was a key relief pitcher for the 1983 White Sox, who won the American League West that year.

So I was familiar with the guy, from the '83 White Sox and his trading cards and the way announcers enjoyed saying his melodic name.

But something made me look up his cards on COMC and then on Trading Card Database.

There, I confirmed what must have been stored in a tiny corner in my brain: Salome Barojas has no Topps cards.

The only one I can think of right now is 1960s player Tony Horton. His absence from Topps cards is well-established and he can be found only in oddball sets like Kellogg's and TCMA. But Horton's case is so well-known that collectors have even made cards of Horton.

I can't think of anyone bringing up Barojas' non-Topps story, even with nearly 400 innings pitched in his career. Perhaps it's because Barojas did show up on Donross and Fleer, licensed cards.

But I did find one mention of Barojas' absence from Topps. A SABR research site tracked the pitchers with the most career innings pitched prior to 1999 who had never appeared on a Topps card.

The pitcher ranked first is Rich Robertson, who appeared with the Twins and Pirates in the mid-1990s. He totaled 415+ innings without showing up on a Topps card. 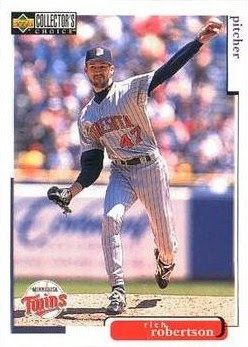 He appears on this Collector's Choice card and a couple of Fleer/Ultra cards. It's still pretty paltry considering the card era in which he competed. That might be because he lost 17 games in one season one year. Topps, which cut down the size of its flagship set dramatically in the mid-1990s, may have deemed Robertson unworthy of featuring. Or perhaps it was a contract disagreement with Topps, which was the case with Staub and Bonds and others.

I'm thinking that's definitely the case with Barojas. There is no way that Topps, in the middle of the 1980s, in a competitive fight with Donruss and Fleer at the time, would ignore a regular player like Barojas when Donruss and Fleer were printing cards of him. 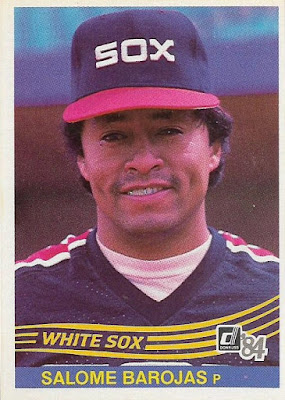 That makes me value the cards I do have of Barojas. He may not have had the longest career, but his cards seem a bit special now that I know he never appeared on a Topps card. I'd feel the same way acquiring one of those oddball cards of Tony Horton.

The Shlabotnik Report said…
Wow, that's pretty astounding. I'm sure that, at the time, I realized that I didn't have any Topps cards of Barojas or Robertson, but I probably figured that I just didn't happen to have them, not that there weren't any.
November 21, 2018 at 7:49 PM

Mark Hoyle said…
I think I’ve become a Tony Horton super collector. I’ve managed to grab most if not all his oddball cards.
November 21, 2018 at 7:52 PM

John Bateman said…
This was a forgotten memory for me. I do recall back then wondering why he was not in the Topps 1982 Traded Set. They included a lot more rookies that year (than 1981). He was a pretty big rookie that year (though Not a Ripken or Sax or Johnny Ray). Then I recall him not being in 1983 Topps set, which I found odd. His career sort of petered out after that and I guess I did not pay attention after that.

A theory: Baseball Reference said he was bought from a Mexico Team on 4/1/82. I thought Topps used to sign up players coming up in the minor leagues at spring training. Since he did not come through there they did not get him and for what ever reason did not sign him next spring training. His career went down pretty fast, so maybe just gave up on him.
I am assuming Fleer and Donruss has some different arrangement signing the players (what that was I don't know and this clouds my theory).

FYI your career Ings are off Barojas and Robertson both pitched less than 500 major league innings.
November 21, 2018 at 8:34 PM

night owl said…
Good theory ... IPs are fixed. Research site threw me off by listing total thirds of innings, which I don't think I've seen before.
November 21, 2018 at 8:42 PM

Commishbob said…
I didn't remember/never realized that he had no Topps cards. I DID remember that the O's lit him up (OK, it was only three singles in a row, but still) after Tito Landrum's dinger in the 10th that won the pennant in '83's ALCS 4th game.

Brett Alan said…
Fleer and Donruss had contracts with the players' union, not the individual players. If the player was in the union, those companies could make cards of them. I believe that prior to 1994 all major leaguers were in the union. (Some players who crossed the picket lines in 1994 were not accepted into the union.)
November 22, 2018 at 3:02 AM

Nick Vossbrink said…
Bringing up the strike is a great point. The weird dynamic of replacement players and MLBPA contracts and everything else should totally show up in cards over the next decade.
November 22, 2018 at 9:29 AM

Fuji said…
Wow. I'm pretty impressed that someone out there actually did the legwork and discovered all of these guys without Topps cards.
November 22, 2018 at 1:14 PM