Now is as good a time as any 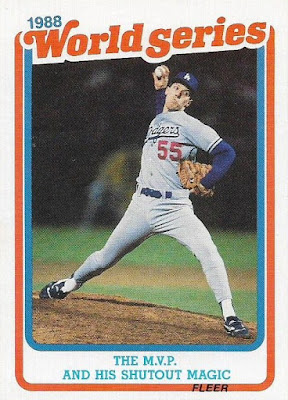 Not that I needed reminding, but I read a New York Times story the other day about how it's been 30 years since the Dodgers won the World Series.

Orel Hershiser was interviewed for the story and he was talking about how people still come up to him on the regular to thank him for 1988. This was the magic of 1988, he said. You win the World Series once and you'll be remembered fondly for the rest of your days.

As a broadcaster for the Dodgers, Hershiser said that he wanted this year's team to experience what he does. They came so close last year, one game away, and they could have easily won the whole thing, They deserve to know what that's like.

Now that the Dodgers are in first place, I think now is as good a time as any for them to win the Series. Last year's season of domination didn't work, so how about if they get in through the side door, after a season of injuries, hitting slumps and bullpen blowups?

Granted, there's the matter of one week to play with the Rockies less than two games behind and no wild-card berth as a fall-back. L.A. has to play the Diamondbacks -- who folded like a napkin against Colorado -- and the Giants to close out the season. So no guarantees against two spiteful teams.

However, I prefer to dwell in the positive today. And to help me do that, I have some 1989 Topps World Series cards to show.

They did too make them. 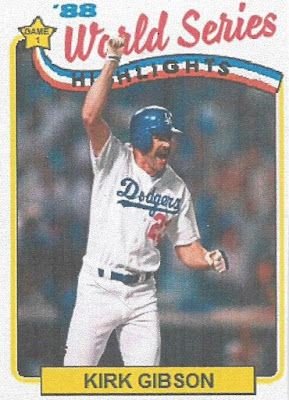 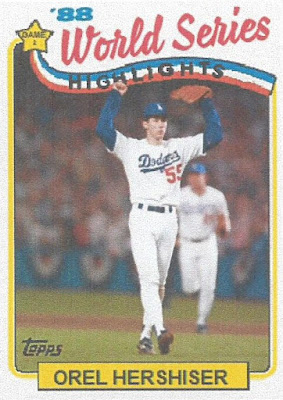 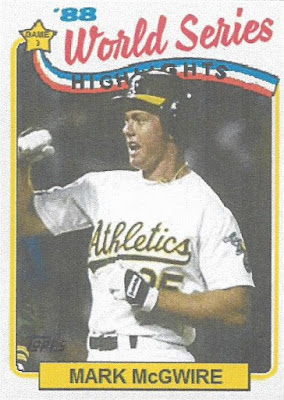 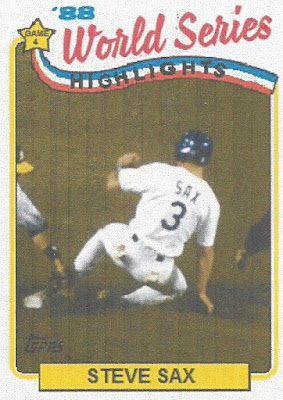 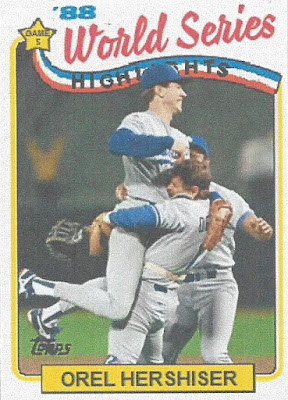 Well, someone made them anyway.

That someone was Jeremy of Topps Cards That Never Were.

One of the great injustices of 1980s cardboard was the lack of Topps World Series cards, none more appalling than the failure to recognize the 1988 Dodgers (and if I'm being fair, the 1986 Mets). Fleer did the honors, thank goodness, but I've always wondered what a 1989 Topps set of World Series cards would look like.

Jeremy came through. If that design looks familiar, it's based on the 1989 Topps all-stars subset design. 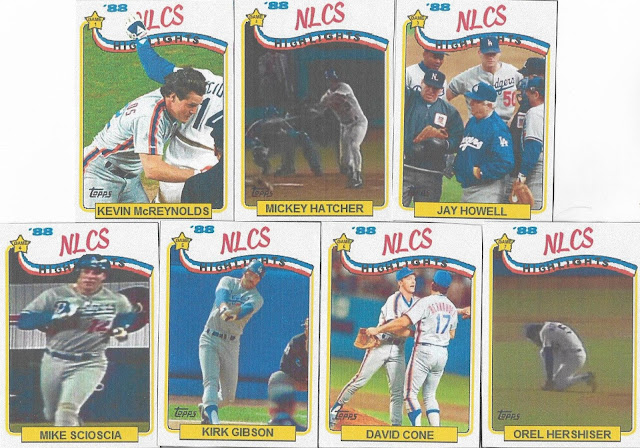 I still get nervous when I think about that series.

Also, there are backs for all of the cards with the familiar red theme: 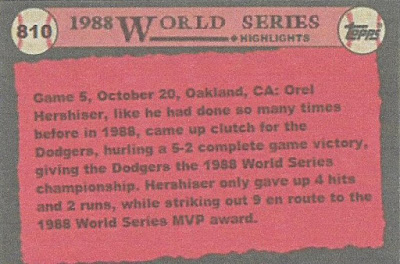 So this provides some closure for Topps dropping the ball all those years ago.

Jeremy also sent a bunch of Dodgers cards. I haven't had time to go through to figure exactly what I need (I'm just back from an out-of-town trip). But the prospects are good. I don't recognize a lot of these cards. 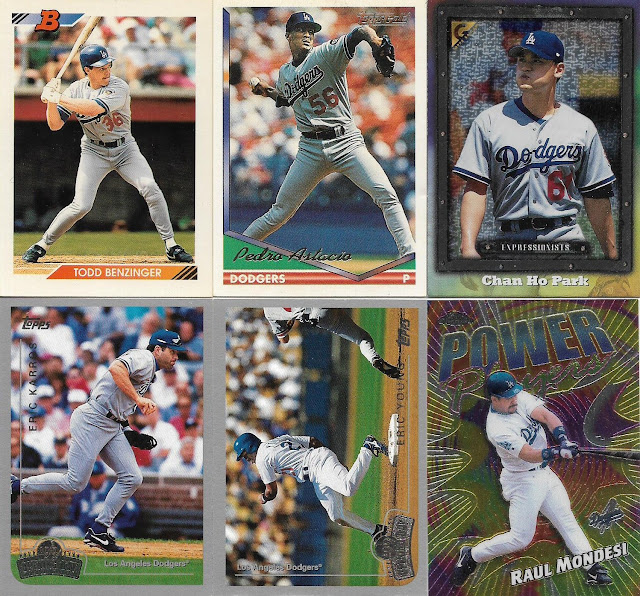 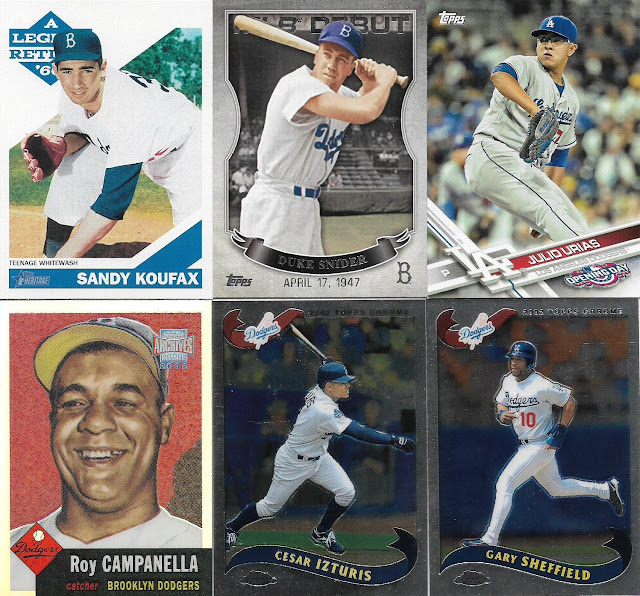 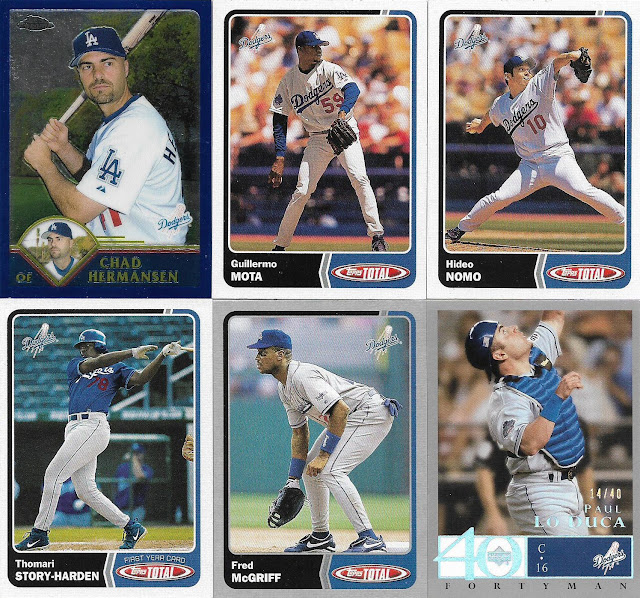 I got excited about the Lo Duca 40man card because I always need 40man cards, and then I saw it was a numbered parallel, which I suppose is cool, but only if I already have the Lo Duca base card!! 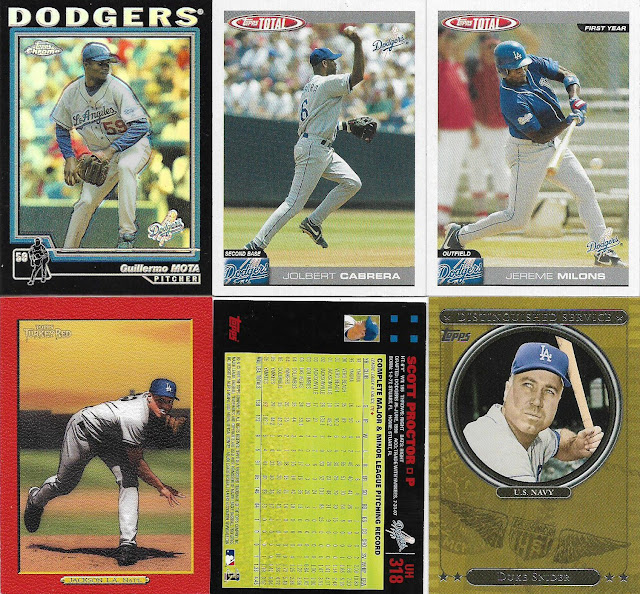 I know for a fact I need the Distinguished Service Duke Snider card. Snider signed my version of that card a number of years ago and then I forgot all about needing a regular unsigned version. 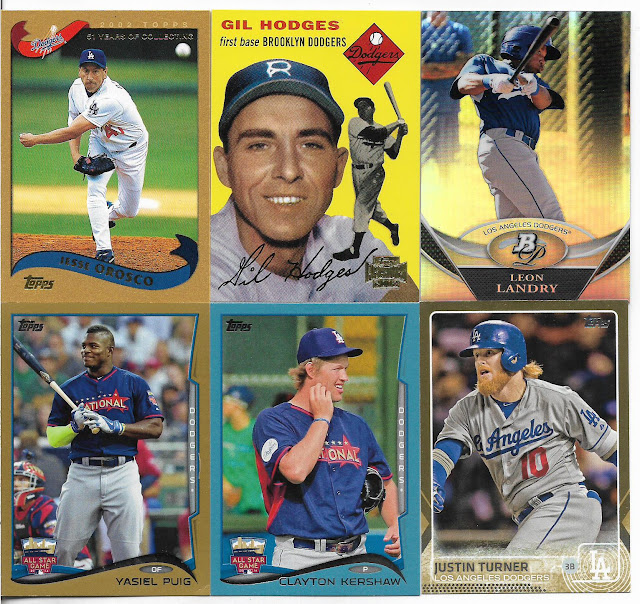 Parallels aplenty. I have some checklist checking ahead. (UPDATE: Someone found my want lists!!!)


The final week of the season could be a nerve-racking one for me and the Dodgers. But at least I have Jeremy's '89 Topps World Series set to remind me of the best times.

There's still that matter of a Topps 1982 World Series set recalling the '81 World Champion Dodgers. If any card-makers are listening.

The Shlabotnik Report said…
And this is why I should never scan the images without reading the accompanying text first. I saw those NLCS cards and I was thinking "Hey, I don't have that McReynolds card... or that David Cone card! How did I miss those?!?" I even went as far as to look in tradingcarddb.com... So, I guess what it boils down to is "Excellent work, Jeremy!"

Peter K Steinberg said…
This might get me blocked but I am fine with the Dodgers extending the drought. Jeremy made some sweet cards, thanks for sharing them.
September 24, 2018 at 9:15 PM

BaseSetCalling said…
World Series cards make the set of baseball cards go round. I was sometimes a little awestruck by seeing the World Series, again, on a baseball card the next summer.

bbcardz said…
After a tiny bit of research, I figured out why you show only the back of the 2007 Topps UH Scott Proctor card--the picture on the front would look out of place. Nice stuff!
September 25, 2018 at 2:25 AM

Jeremya1um said…
Glad you enjoyed the cards, Greg, and thanks to everyone who complimented the customs.
September 25, 2018 at 1:55 PM

Defenders50 said…
1999 Opening Day was one of the larger set collections I had as a kid. I still think the design is significantly better than Topps 1999 Flagship. Something about it being silver instead of gold makes it more appealing to the eyes.
September 25, 2018 at 2:12 PM

Angus said…
You still get nervous thinking about the 1988 NLCS. I get upset. Game 4 was bad enough, but Game 5 fell on my birthday. You'd think that my team should win on my birthday! But, no...

steelehere said…
Thanks to the Brewers and later this week the Cubs hopefully beating up the Cardinals, the Wild Card as a fallback should be in play.
September 25, 2018 at 9:56 PM