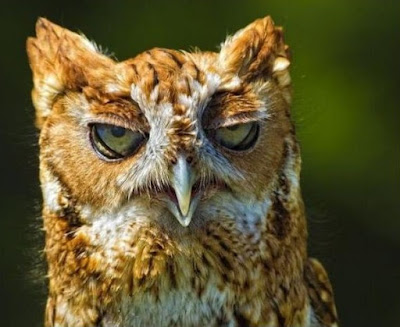 I'm supposed to be holding a giveaway, but life doesn't want me to hold a giveaway.

I'm supposed to be holding a countdown of the greatest 100 cards of the 1980s, but life doesn't want me to do that either.

What does it want me to do? Significant adult tasks that you don't need to be reminded of here. But they are all familiar, and they all take up a lot of time, and I am quite exhausted, and there is no end in sight at the moment.

So I've got to make some decisions here.

I'm still going to blog during this period, but the greatest 100 cards countdown will have to wait. I still haven't gotten down to 100 cards yet and that's got to happen before I even start ranking and scanning. So I don't know when that will kick off. All I can tell you now, hopefully, is it will begin sometime in autumn. That's as narrow a time frame I can make.

I'm still holding the giveaway to celebrate 10 years of this blog, but it's probably not going to start this week as originally planned.

So this is a little post so people can get prepared for the giveaway, whenever I kick it off.

I've decided that this giveaway will be of the card draft variety, meaning each participant gets to pick a card according to their rank in the draft. This is a little more difficult for me than the one-shot, one-person-gets-the-whole-booty contests that I usually run, but I think more people deserve to win a card for this anniversary.

As I mentioned last week, the giveaway is for regular readers of this blog only, based on who has commented in the three months between June 12 and Sept. 12. I just went through and noted all the commenters. Here is the list of those who are eligible:

So I'm probably going to cut off this giveaway at about 30 or so participants.

This is how I will determine who will participate in the contest: I will make a post called GIVEAWAY POST. That will be the cue for those who are eligible to begin entering the contest. They can enter the contest by commenting on the Giveaway Post. Once there are the maximum number of comments for the contest then I will determine the order of the card draft and begin the draft. So it's important to comment when you see the post because there are limited slots available.

Unless I receive 30 or so comments immediately, I'll probably reference the Giveaway Post in subsequent posts with a link to that post for a week or so to allow time for eligible people who may not read the blog every day to comment on the Giveaway Post.

Does that make sense? (in my current state I don't know if anything makes sense now).

It's entirely possible that not even 30 people will want what will be given away, but you can be the judge of that.

This is the majority of what's available: 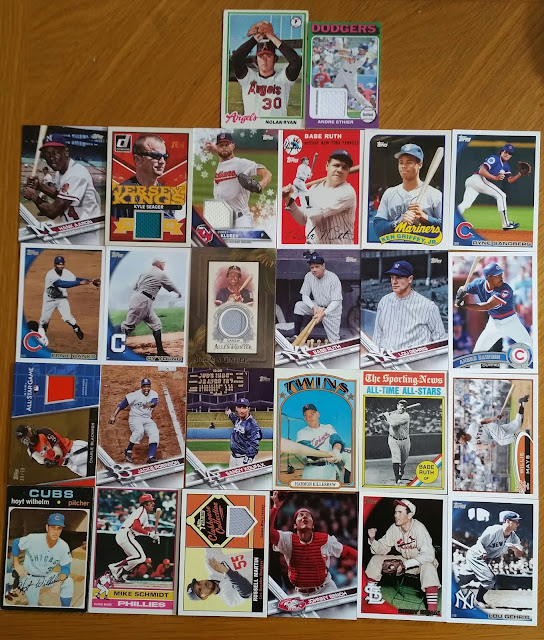 Almost everything here is a short-print, a relic or a vintage card (no reprints). I think only the Babe Ruth up top (insert) and the Griffey Jr. (no way in the world 1989 Topps is vintage) are the exceptions. Much of this was donated by R.C., who wanted the cards to go to a good home. That's what I'm doing here.

This image amounts to 26 cards. So I will add a few things to this to get it to more than 30 items for selection. You'll see the additions on the Giveaway Post.

An added note: When I was compiling those who commented in the last three months, there were a couple comments that were listed as "anonymous" or "unknown." I know Blogger has done some things recently that converted named comments from nonblogger sources into "anonymous," etc. So if you want in for the contest and you are one of those people, send me an email. I won't let just any random person who emails me, saying "I am Unknown," into the contest, but if the email is from a familiar person who's commented in the past, I'll include you.

So that's all I've got for today. Hopefully, I'll be able to post a few more times this week, but if not, you'll know why.

Henry Blanchette said…
Don’t worry, the contest makes perfect sense. I’ll be on the lookout so I can participate. If I get a spot, I’ll probably go with the Carew or Blackmon relics or the Babe Ruth for my 1976 Topps set.
September 18, 2018 at 8:03 PM

I know what you mean about things getting in the way.. I've been stuck at 1991 Donruss for a while now on my Expos project... Moreso when I found a random space in the middle of the spreadhseet...
Otherwise, it's just been work and sleep.. I'm thinking about going to bed right now since 545 comes way too early..
September 18, 2018 at 8:32 PM

Johnnys Trading Spot said…
Whew, when you said Prep I thought you were going to tell us they talked you into a colonoscopy, lol.
September 18, 2018 at 8:45 PM

Hoarding Cardboard said…
I've struggled to find the time to write during the month - 0 posts so far. It makes me feel better that I'm not the only one struggling.
September 18, 2018 at 9:07 PM

flywheels said…
Just a thought. I quit scanning a the majority of my card images for my blog awhile ago. I use my laptop in the dining room a lot of my scanner/printer is upstairs in my office. It's a long walk and there are a lot of steps to get to my office (that's sarcasm BTW). I instead just snap a nice pic w/ my phone and use the built in editor to make it look prettier. It's not as good as a scan, but it saves this lazy guy some time.
September 18, 2018 at 9:13 PM

steelehere said…
Thanks for including me in the contest. My fingers are crossed in hopes of being the winner of either of the 76 Topps cards or the 78 Ryan :-)
September 19, 2018 at 12:21 AM

Fuji said…
That owl photo is awesome. That guy looks exactly how I've been feeling the last week and a half. Hope life eases up on both of us, so we can enjoy the last two weeks of the regular season.
September 19, 2018 at 1:00 AM

Michael Ott said…
It only sounds confusing when you read it during the day. During the Night Owl shift, the contest makes perfect sense. Here's to another 10 years!
September 19, 2018 at 9:02 AM

Unknown said…
I made the list. Suddenly I feel need. Loved! Hoping for another 20 years from another Night Owl from the same place in the US (western PA). My wife would like to have words with you for getting me back into collecting.
September 19, 2018 at 2:42 PM

AdamE said…
Download an app called CamScanner. It takes a picture as a pdf and crops the image all at once. Even gives options like brighten, darken, highlight, etc.
September 19, 2018 at 3:18 PM

AdamE said…
I started reading your post and thought YES top of the list!!! Then was like AW CRAP, its just cause the alphabet!
September 19, 2018 at 3:21 PM

Jafronius said…
It's an honor just to be nominated...don't think there'll be any issues getting to 30 or problems with the prizes. Hope I get lucky!
September 19, 2018 at 5:00 PM

Jongudmund said…
Hey I'm in the list. Can I enter the giveaway of it means posting to Wales? That's a pain right? I think I've had my prize by getting answers to my dumb questions on Twitter!
September 19, 2018 at 6:32 PM

bbcardz said…
Hoo boy, I can relate so much to Mike Matson ("...it's just been work and sleep."), jasongerman9 ("I've struggled to find the time to write during the month - 0 posts so far. It makes me feel better that I'm not the only one struggling."), and Adam Kaninger ("...Crazy week at work for me but I'll try to get my name in the (second) hat."). Thanks for your generosity! btw, I'll have the last two installments of the Dodgers 60th Anniversary cards in your hands later this week.
September 24, 2018 at 7:51 AM

acrackedbat said…
thanks for including me on this list N.O.! the spots will fill quickly with this cool selection of available cards! I love the whole bottom row!
October 1, 2018 at 6:18 AM