September 10, 2018
(Today I bought some cards in the card aisle for the first time in 3 weeks. It was just a 3-pack of Chrome -- with the 5 pink parallels -- and the guy at the checkout asked if they put gum with cards anymore. I said, no, not really. He said his brother used to buy "old 40-year-old packs" with gum in them and eat the gum. I didn't ask him if his brother was still alive. It's time for Cardboard Appreciation. This is the 273rd in a series): 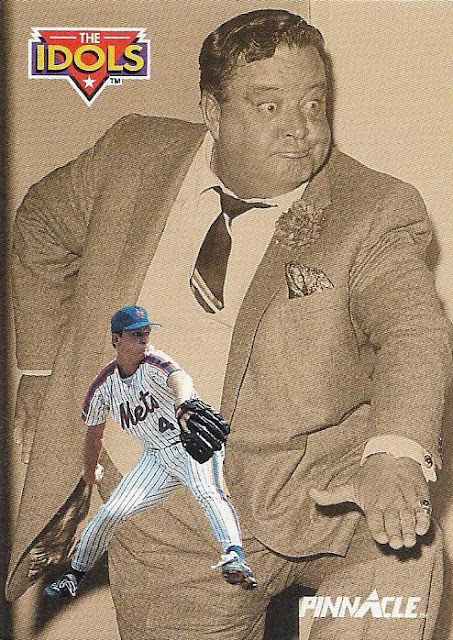 In 1992, Pinnacle arrived onto the baseball card scene with a sleek, slick first set that framed its players in midnight black. I didn't like much about cards in 1992, but I did like Pinnacle.

Pinnacle also featured an interesting subset that year called "Idols". This set -- similar in look to Topps' sets of the mid-1950s -- displayed a pair of photos, a smaller color action photo of the current player and a larger, sepia-toned image of the player's idol. (There was also an "Idols" insert set that featured rookies. That set featured horizontal cards and all-color images).

Pinnacle followed the same pattern with another Idols set in 1993.

The sets were a nice way to get old stars on current cards again. I particularly like the Gregg Jefferies card because his idol was Ron Cey.

But the card that interests me most is the 1992 David Cone Idols card because he did not pick a sports figure as his idol. He picked legendary 1950s comic Jackie Gleason. 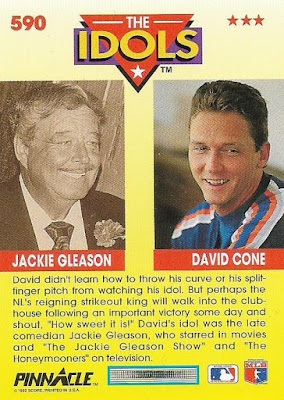 Out of all of the Idols subset cards in 1992, Cone is the only one who mentioned a non-sports person. Even the players who selected non-baseball players were a rarity as, including Cone, there are only three of them.

Here are the two checklists:

So for the idols that's 11 baseball players, two football players and a comedian.

To me, that makes David Cone the most interesting figure in that entire subset.

While batters are listing their hobbies as "sports" on the back of their Kellogg's 3-D cards, pitcher Steve Rogers lists "arrowheads" and pitcher Dan Quisenberry mentions "stand-up comedy".

David Cone is an interesting dude who had an interesting career. You don't believe me? Read this. All during his career teammates would call him goofy and "that crazy kid." He had a temper that came out of nowhere. He got himself into some weird situations. He enjoyed writing and his goal as a youngster was to become a sportswriter like Oscar Madison in "The Odd Couple".

I didn't like Cone much during his time with the Mets, because his team was always knocking heads with my Dodgers in the late 1980s. (Cone also wrote a story for the newspaper during the NLCS that backfired on him as it gave the Dodgers ammunition for the series). But if I could view him objectively I'd find someone strange and interesting, who was the only one that would go out on a limb and say, "I'm not just about baseball, I like other stuff, too. Jackie Gleason is pretty funny."

Because not only does that make the player interesting, it makes the card interesting.

Matt said…
Awesome card! Fun fact: Every time Gleason pet his stomach in The Honeymooners, it was because he forgot his lines.
September 10, 2018 at 8:01 PM

Anonymous said…
1993 actually has an idols subset in each series. The series 1 subset is most notable to me for the Delino Deshields/Malcolm X card. It's also Red Sox heavy with players' idols including Dwight Evans, Carlton Fisk (in a White Sox uni, to be fair), and Carl Yastrzemski. Also, Larry Walker being the good Canadian that he is idolizes Mike Bossy.
September 11, 2018 at 8:21 AM

Fuji said…
As soon I read colorful individuals and intelligent, I thought of Maddux. We all know what he did on the mound, but he was the most colorful off of the mound. Would have loved to see his hobbies on a Kellogg's card.
September 11, 2018 at 10:48 AM

Anonymous said…
1991 Studio is fantastic for talking about players' hobbies and interests on the backs. Did you know that Tim Raines enjoys remote control airplanes and his favorite show is Matlock?
September 11, 2018 at 12:29 PM

Defenders50 said…
See, I knew there were reasons David Cone became my favorite pitcher in the late 90s (forgive my Yankee fandom). Now I'm just curious about that temper and wonder if it would ever pop up in a YES broadcast. Hmmm...
September 11, 2018 at 2:06 PM

Henry Blanchette said…
Not sure which set it's from, but I'm pretty sure I have one of these cards showing Delino DeShields and his idol, Malcolm X.
September 11, 2018 at 3:24 PM

Community Gum said…
The only thing really missing from that card is the reason why Gleason is his idol. What about him over other actors/comedians and sportspeople? Maybe tough to get in a short blurb, but would be better to try than to wedge in a catchphrase reference.
September 11, 2018 at 5:46 PM