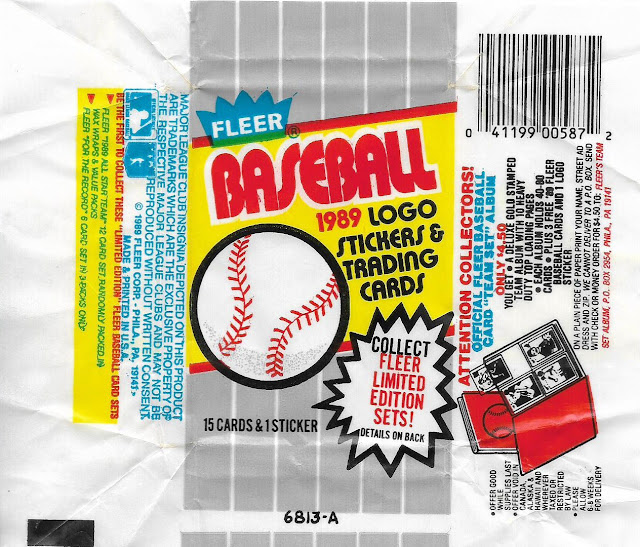 I finally made it through all 36 packs of the 1989 Fleer box that I received from Johnny's Trading Spot.

At 540 cards in the box, obviously I didn't complete the set from those packs since it's 660 cards in total. I'll have to see if it's complete once I add the many '89 Fleer cards already in my collection.

The collation was quite good -- this is pre-1990s after all -- absolutely no doubles and just about all the big names of the day. But I don't know why I'm telling you all that boring set-builder stuff because all you want to know is: what errors did I pull???

I'm right on the same page with you.

I found myself immediately searching for errors as I was opening the packs. With no real attachment to the set this was what was getting me through 36 packs. I went to Trading Card Database for a list of 1989 Fleer errors and took note: 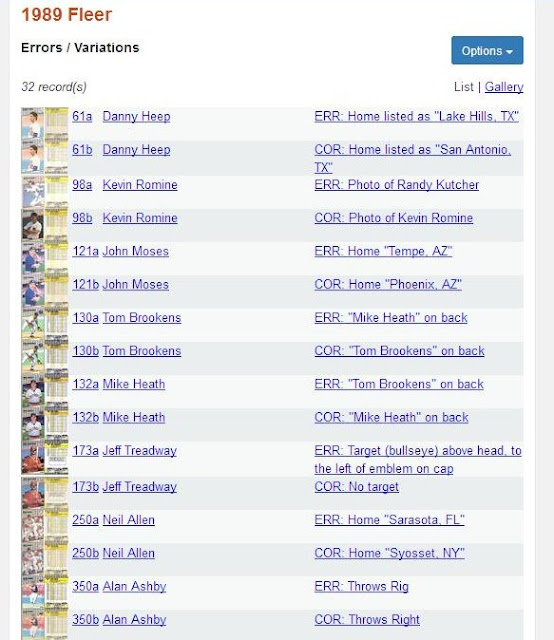 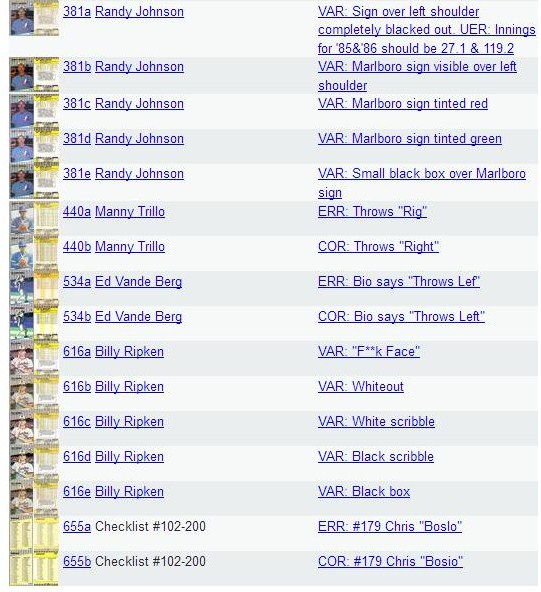 That's a bunch of them.

You already know I pulled the most famous one. 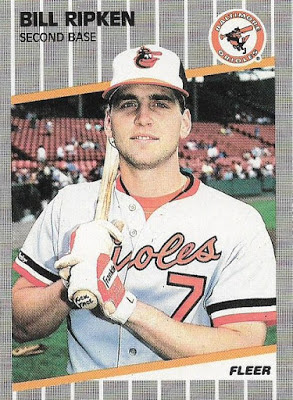 The FFer came out of Pack 4. Immediately, people were asking me if I pulled any of the variations of the card, but again, this is the '80s, collation was relatively under control. There were no other variations. 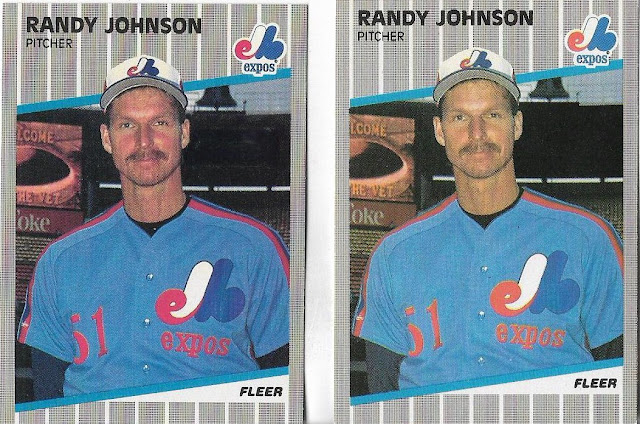 I also pulled one of the Randy Johnson variations from Pack 31. I paired it up with the one I had already in hopes that you can tell the difference. As everyone knows, there are several versions of the Marlboro ad being blacked out over Johnson's left shoulder. The one I already owned, on the right, shows no signs of the ad. The one I pulled on the left shows an outline of the ad, and if you see the card in hand you can make out a faint Marlboro ad.

There are also red tint and green tint versions, I don't know how people tell the difference between all of those.

As for the errors on the back, I did pretty well with those, too. But I had to double-check each. 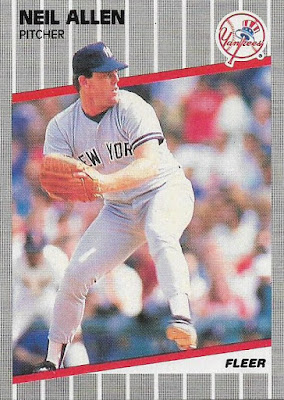 First out of box was Neil Allen. His error says his home is in Sarasota, Fla., when it should be Syossot, N.Y. Let's take a look: 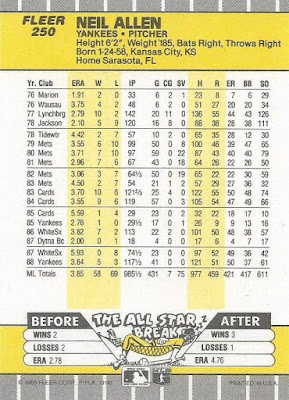 Florida! It's an error! 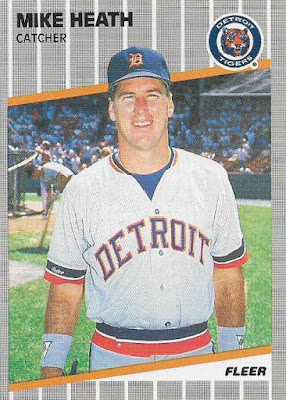 Next was Mike Heath. His error is a big fat one. The card features the card back of teammate Tom Brookens. I turned the card over and ... 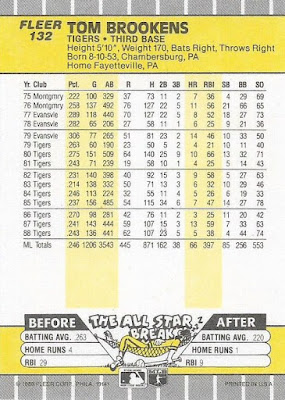 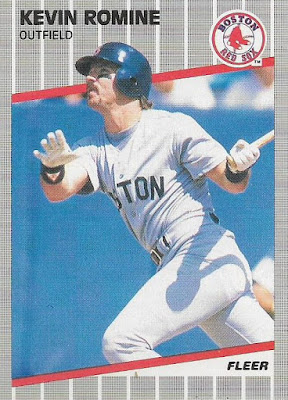 Moving on to Kevin Romine. This is actually an error on the front, sorry about that. The player shown on this card is actually Randy Kutcher. 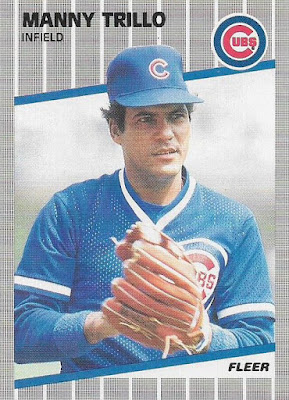 Manny Trillo is up next. His error card says he throws "Rig" on the back, leaving off the "ht". Let's take a peak: 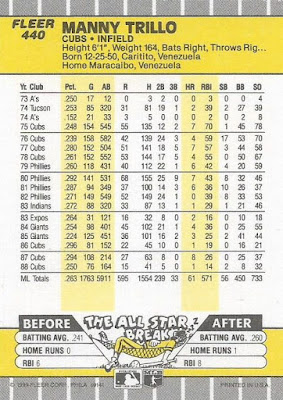 There's even some dots where the missing letters should go. 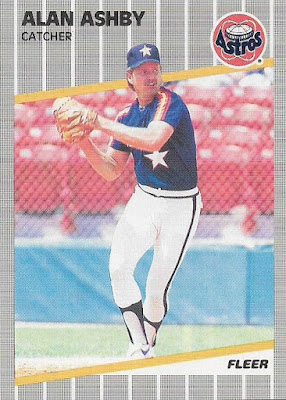 Alan Ashby came out of the box next. He has the exact same error card as Trillo. It says "Throws: Rig" 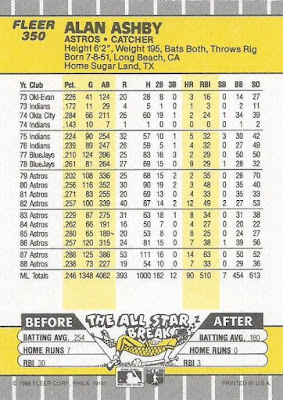 That's an error. But there are no dots this time.

Actually, this is a fairly lame error. Fleer could say that "Rig" was just an abbreviation instead of issuing a corrected version. But that wouldn't get collectors to hunt all over for an Alan Ashby card. 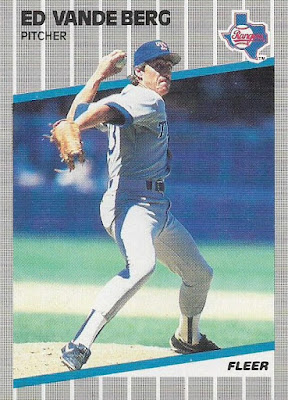 I pulled Ed Vande Berg's card next. His error is that the back says "Throws: Lef" instead of "Throws: Left" and now I'm convinced that Fleer was purposely making these errors. Let's turn it over. 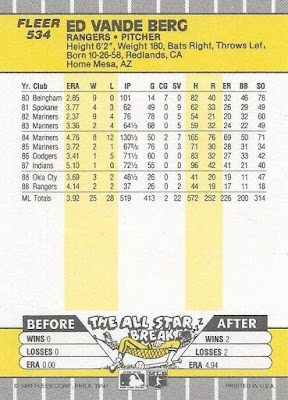 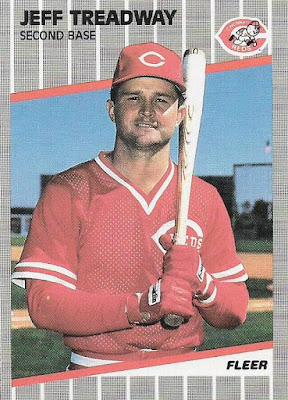 I pulled Jeff Treadway's card next. This is another front-facing error. The error is that there's a tiny target shown above Treadway's cap. But there is no target on this card, so this is the corrected version.

So I did pretty good on the errors. I pulled all of them except for Treadway, Danny Heep, John Moses, Tom Brookens (with the Mike Heath back) and checklist No. 655.

By now some you of insert fiends are saying "enough with the errors, did you pull any Fleer All-Stars???" 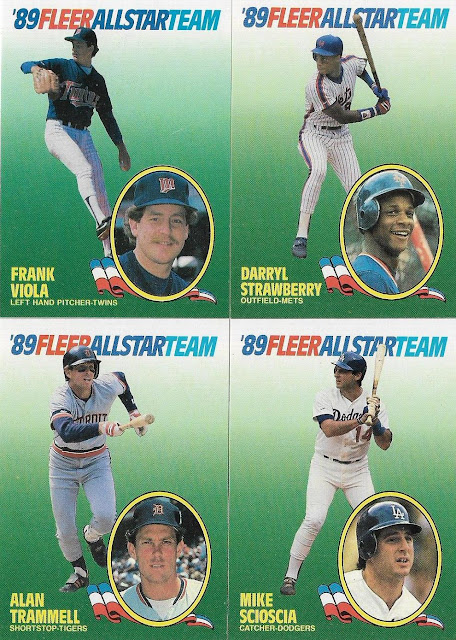 There were four in the box.

But some of you still aren't satisfied. Because you're all about the rookies. DID I PULL THE GRIFFEY CARD??? 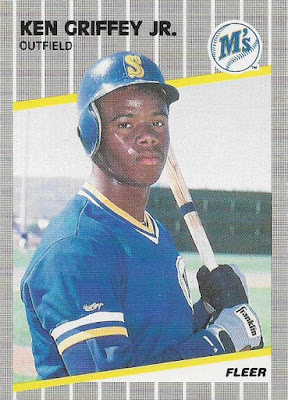 I did. With only two packs to spare, I might add.

That made it a very successful box with Ripken up front, Randy Johnson in the last third and Griffey Jr. near the end. 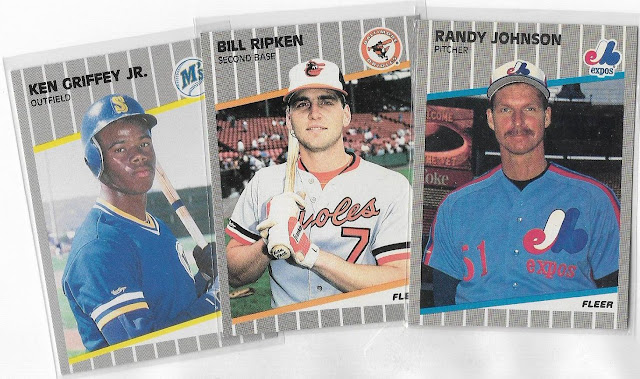 But there are still some people who probably aren't satisfied. 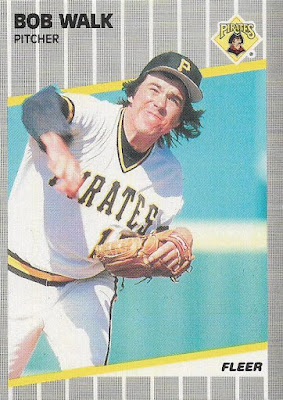 I pulled the Bob Walk card.

Peter K Steinberg said…
You have made me truly want to buy a box of these myself. I definitely could see the outline of the Marlboro ad in your Johnson card; and you're right that the only reason you'd ever actively say "I want an Alan Ashby card" is because you might pull the error. I was kind of sweating about the Griffey and am glad you pulled that. I have three of them just collecting dust. Great post!
September 21, 2018 at 8:10 PM

Nick Vossbrink said…
I don't know how master set builders do it with all these errors and variants. I can kind of see getting into it with PCs and even team sets but for a complete set? I'm impressed at the dedication.
September 21, 2018 at 8:19 PM

kcjays said…
I'm sure you had fun. There were some great pulls there. I put together a set of Topps every year by purchasing a hobby box. It's fun to open packs, although for me it's been diminished by the overwhelming number of inserts and parallel cards.
September 21, 2018 at 10:30 PM

madding said…
It's fascinating to me that the Randy Johnson variations were not known at the time that I was collecting back in high school, considering that he was a pretty big deal even early in his career. It turned out that I had two of the very visible Marlboro ad cards in my collection, both of which I eventually sold online somewhere years ago. Unfortunately, I sold my Ripken for $20 back in the day. Everything I bought in 1989 must have been from some of the earliest print runs.
September 22, 2018 at 3:53 AM

The Lost Collector said…
Had no idea there were so many errors in the set. Interesting. I'll have to see if I have the Neil Allen error. I'm guessing I might have a few of his cards from this set and I would have never known to check.
September 22, 2018 at 9:34 AM

Anonymous said…
Great post! Brings back fun memories of my stepbrother and I opening packs of this set back in '89. And hey, thanks to your post I learned that I was born in the same town as Neil Allen!
September 22, 2018 at 10:52 AM

Bubba said…
What a fun post. You should do more box openings. You always have interesting things to say. Maybe next time I send you a package, you'll get a fun box along with it (something silly of course).
September 22, 2018 at 3:29 PM

Jongudmund said…
Really enjoyed this post. Presumably it was a box shipped before Fleer realised Billy had a swear on the end of his bat.
September 22, 2018 at 4:02 PM

Jeff said…
"and now I'm convinced that Fleer was purposely making these errors." 1989 Fleer was one of the reasons I pulled away from the hobby during the 90's. If they weren't doing all the error insanity on purpose, there would have been only 1 corrected version. But of course they corrected it (and the Randy Johnson) multiple different ways. Pure money grab.
September 23, 2018 at 2:57 AM

Fuji said…
Holy smokes. I barely could make out the difference between your two Johnsons. Whoever originally found that error had some really good eyes.
September 23, 2018 at 8:36 AM

SumoMenkoMan said…
Wow, what an iconic set and I had no idea that there were so many errors in the set. It was like the wild west of card collecting back in 1989. I really enjoyed this post!
September 23, 2018 at 10:17 AM

Community Gum said…
It's this kind of thing that makes me roll my eyes when people call out a simple error in 2017 Topps as pure monopoly laziness.

This box must have been one of the first print runs with all those errors and the "a" versions you found. Pretty cool stuff
September 23, 2018 at 8:22 PM