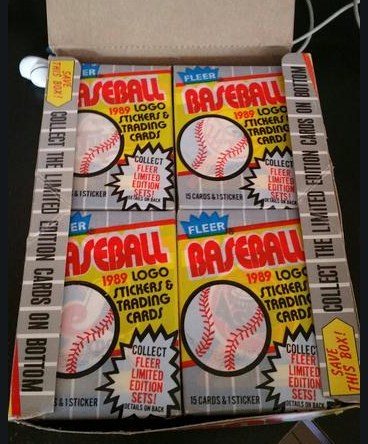 I mentioned last post about another medium flat-rate box arriving at my house early last week.

It was from Johnny's Trading Spot and it's going to take me days, if not weeks, to go through it so I can make a proper post.

I looked at it with question marks everywhere.

My 1980s Fleer completion quest clearly states Fleer sets from 1981-88. I'm not doing 1989 Fleer. Its pervasive nature turned me off of the set a long time ago.

But I don't think John cares about every collector's little foibles. I picture him at a card show a day, probably with a shopping cart, just piling things in, stating loudly: "I'll take that box and this box and all these and those over there and that one and that one, too, and a few of those and that big box in the back and all those little ones and that thing you got underneath there and that giant box in the corner and ..." It goes on like that until it's time to move to the next table and then he repeats it again the next day.

And of course the obvious answer is: "find the Bill Ripken fuck face card."

Good for you, 1989 Fleer, someone will always find you useful.

The Buffalo Bills were on TV this afternoon and I knew it wouldn't go well. During pregame, I felt like a mother sending her kid off to school just knowing he was going to be stuffed into lockers all year long. And it went wrong from the start. Before I knew it, it was 20-0, all the Bills were crammed into the same locker and I needed a distraction.

I started with the pack in the top left corner. As usual, it was fun opening random packs. I always enjoy that no matter how long I do this. It's more enjoyable then ordering up a card online. I leafed through the cards actually admiring the fresh, new pinstriped cardboard that had been waiting for me for 29 years.

After the requisite baseball sticker (the Twins), I thumbed through the familiar names: Bob Ojeda, Andy Allanson, Danny Jackson, Mark Salas, Joe Price, Mike Smithson, Les Lancaster, Glenn Braggs ... this was kind of a dud pack. Although I did come across a Joe Girardi rookie.

Packs 2 and 3 were the same. Maybe a little more star power. I called up the list of '89 Fleer errors so I could catch them as they passed. Then it was on to Pack 4.

I pealed open the wax seal, revealing the back of the bottom card and it said:

Now, as every card collector knows and even non-card collectors know, there are several versions of the Bill Ripken card. There are so many that I lose track of them. I've owned the black box version (where a black square blocks out the offending phrase on the bat knob) since 1989 or at least the early 1990s. So there was no guarantee that it was the f-face card.

I flipped the card over. 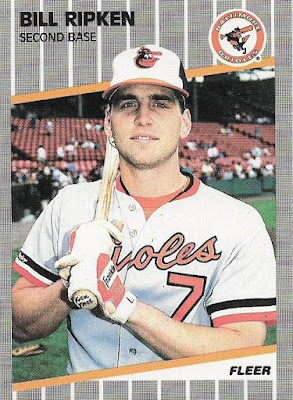 There it is! Possibly the most coveted common card of the late 1980s. Finally in my collection.

It was kind of exciting pulling the f-face card like those collectors did back in 1989 before Fleer issued all kinds of variations in a semi-panic. This is the excitement of pulling cards out of packs. The wonders that await.

Here is a diagram of where the Ripken card came from in the box: 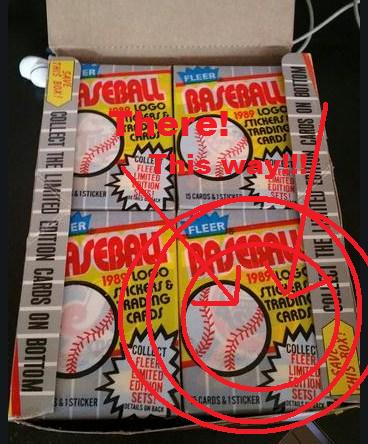 So, I still have 31 more packs to open. I'll probably get to most of them this week. Gotta find that Randy Johnson error and Ken Griffey Jr (which I have already) and a few other errors.

And then there is the matter of since I've got a box of 540 1989 Fleer cards maybe I should just finish off the set and make it a complete 1980s Fleer set sweep? Is it possible that I may actually post a want list for 1989 Fleer?

Eww, that's ugly. I'll have to think about that. Maybe if I need to fill some holes from this set after this box is opened, I'll do it quietly so no one has to know. Publicly collecting 1989 Fleer just makes me wince for some reason.

Anyway, the important thing is I accomplished the main objective for today. 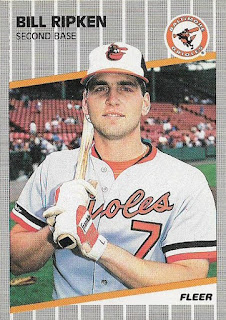 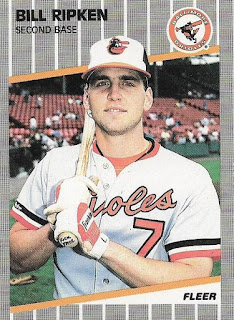 arpsmith said…
Nice pull! I only have the black box version myself.

If you do decide to post a want list let me know, I still need to go through your other want lists as I have tons of 80’s Fleer laying around.
September 9, 2018 at 8:20 PM

Fuji said…
That's awesome! I've opened up a fair share of 1989 Fleer and have never pulled the Ripken error. Plenty of the black boxes though. Oh well... that's okay. I cheated and eventually purchased the F-face card. But it'd be so much cooler if I could tell people I pulled it from a pack. You now have yourself a story to pass down to your grandchildren.
September 10, 2018 at 12:35 AM

bbcardz said…
Too bad about the Bills being crammed into the same locker but at least you found a (in)decent distraction. Like arpsmith, I also have only the black box version. Congrats!
September 10, 2018 at 12:36 AM

The Shlabotnik Report said…
Congratulations! I somehow have no cards of any version of Bill Ripken from 1989 Fleer, so I'm officially jealous.
September 10, 2018 at 6:59 AM

Nick Vossbrink said…
Supercool. Best card of that year and probably the only card from my youth that I still covet.
September 10, 2018 at 8:19 AM

Johnnys Trading Spot said…
I think I still have a few more of those boxes from an original case. I most definitely will take any f'n variations.
September 10, 2018 at 8:27 AM

Jafronius said…
Congrats on getting the card so early! I've always wondered if Bill Ripken gets inundated with those cards to sign TTM.
September 10, 2018 at 12:24 PM

Josh D. said…
Now you just need the Halloween costume to go with it.
http://grantland.com/the-triangle/presenting-the-winners-of-the-1st-annual-grantland-halloween-costume-contest/
September 10, 2018 at 5:49 PM

Defenders50 said…
As a fellow Bills' fan let me just say, Yikes that was bad! The Ripken card seems a fitting consolation.
September 11, 2018 at 2:02 PM

Community Gum said…
That's quite an accomplishment. Back when Andy was with the blog we opened a box and found no versions at all - possibly was searched. As a kid, my dad bought one of each of the versions he could find. I don't know if they survived the big basement flood several years back or not. Will have to check.
September 11, 2018 at 5:50 PM