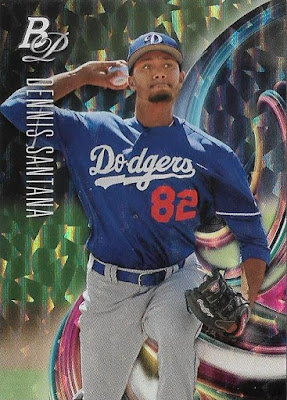 As I slowly pull back from collecting modern releases, some of my collecting goals have gone by the wayside.

My stated mission is to have every Dodgers card (and Dodgers prospects card). So that means getting cards from the new sets that come out every year. But that's starting to get old. I'm making fewer and fewer trips to the big box stores and when I look through cards online, I rarely focus on what was made in 2018.

It sounds like I'm ready to start ordering team sets of whatever modern set that is out and be done with it. But actually I'm not ready for that kind of collecting. As long as I can trade for cards, I'd prefer to land my modern cards that way. Let someone else do my dirty work.

There are other collectors far, far more willing and happy to buy modern sets, the kind that I can't even devise a want list for, and thankfully they send some of those cards to me.

Not too long ago, Douglas from Sportscards From the Dollar Store sent a boatload of cards over the border and they represented all kinds of 2018 needs that I've either ignored or been too lazy/broke to seek out.

I'll break them down by set. 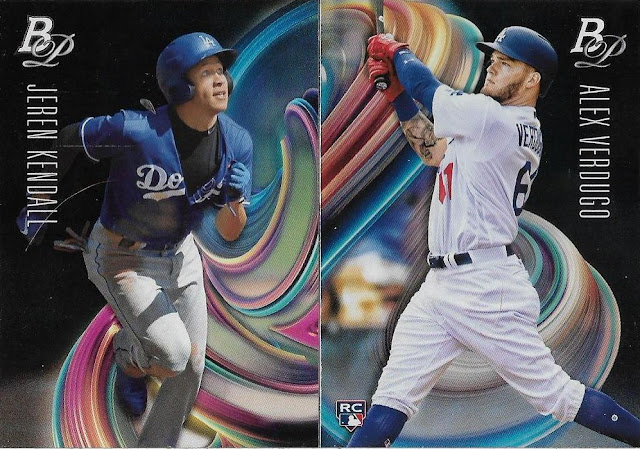 This is a set that if it did appear at the nearby Walmart it vanished in a matter of days and never came back.

I've never been a fan of this set, which explains why it took getting this package to post a team want list, but I do like the look a lot better than previous versions of it. I probably would've let myself overpay for a rack pack if there were any around. 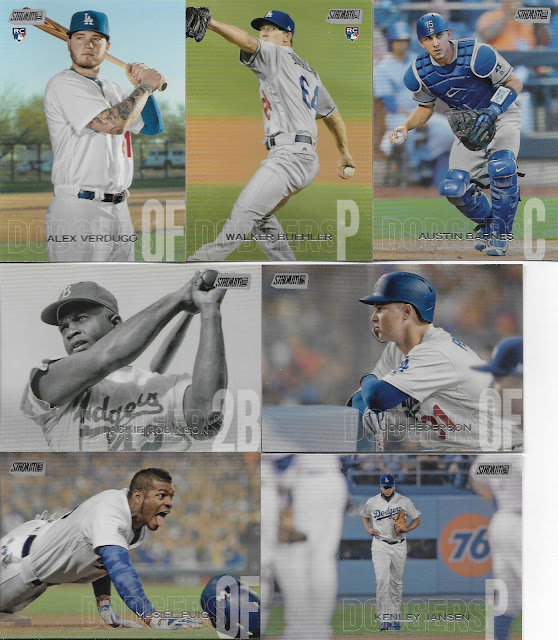 Doug erased nearly all my base-card wants from this list with this group. My Stadium Club purchases had stalled mostly because I don't find SC as exciting as when it first returned. I'm going to blame that on the giant position abbreviation, although it's more than that, I think. 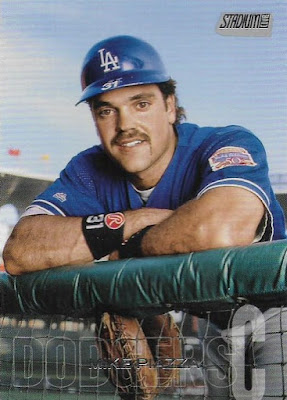 With the addition of Piazza and all those other SC Dodgers, I'm just looking for Kershaw and Chris Taylor to wrap up the team set. 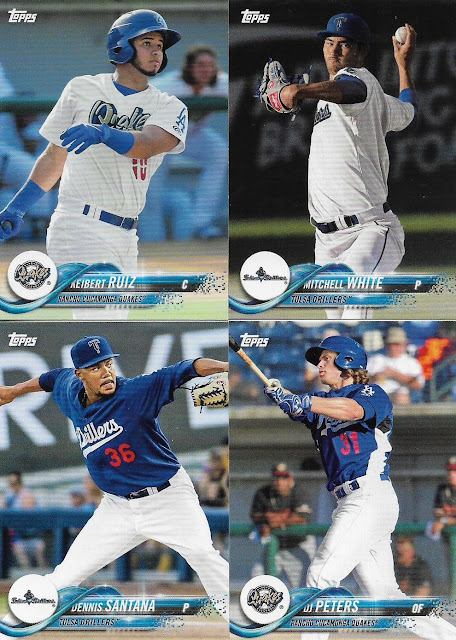 There is NO CHANCE I am buying these cards myself. First, I have never seen packs of this in the wild. Second, I have a difficult enough time rounding up cards of dudes in the majors. Who has time for the may-or-may-not-make-it guys?

But now there is a want list up for 2018 Pro Debut. My guess is it's not terribly accurate given I struggle sometimes to name all the Dodgers' minor league affiliates (what happened to San Antonio? Ogden? Jacksonville? Chattanooga?). 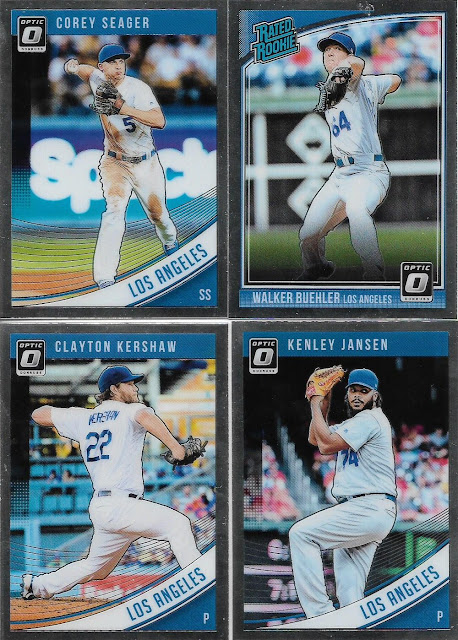 Not that I'm on the look out for Optic any year, but this year's Donruss design is pretty lousy and I don't need to see it again all shiny.

The selling point to Optic is some of the colorful inserts. Obviously these aren't those. But the Optic want list is now up! For me to ignore!

Doug really went the extra distance with this package, throwing in a few hits as well: 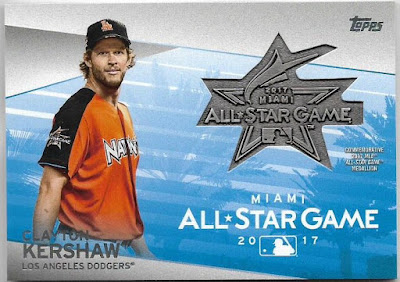 OK, not really a hit. But it's super thick and the metal is shiny and Kershaw looks confused as hell that he's in some Marlins outfit, so I'll enjoy it. 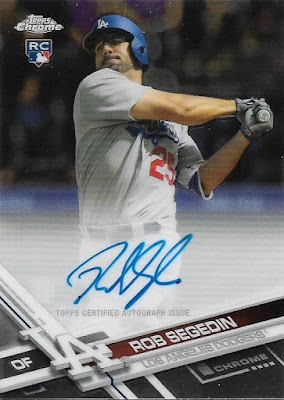 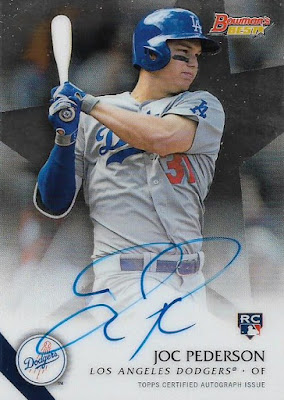 These, though, are definitely hits. That Joc Pederson Bowman's Best card is sweet in its simplicity. 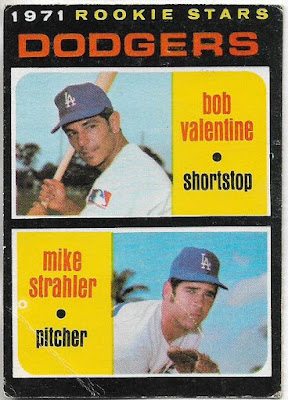 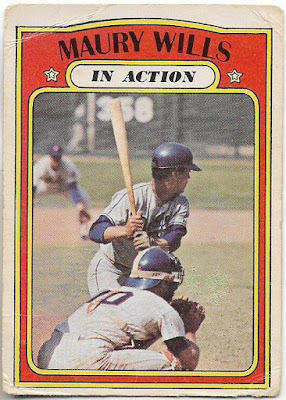 We've now reached the Canadian portion of the package. These are both early '70s O-Pee-Chee cards! It's interesting that on the back of the Wills In Action card, none of the type is in French. 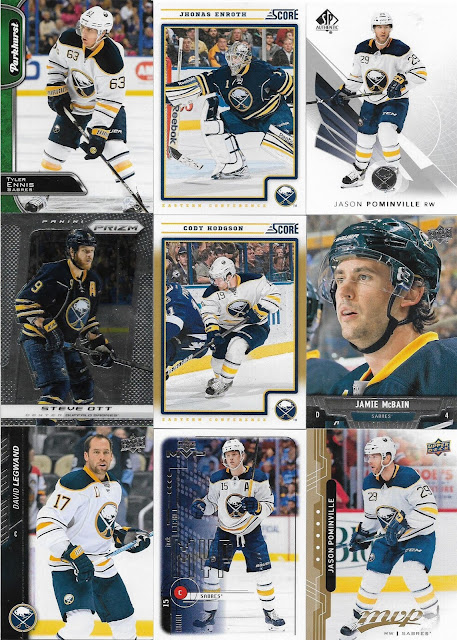 And, of course, there must be hockey cards if a package is arriving from north of here.

Just about all of these Sabres have moved on elsewhere as I always point out when I receive Sabres cards. Let's go through the rundown:

Well, that went better than I thought. 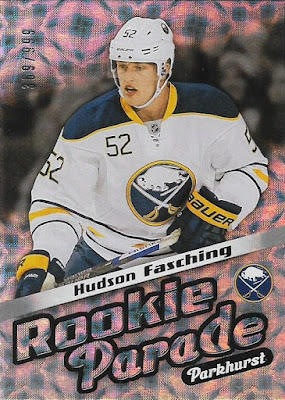 Doug also sent one of these fancy Parkhurst Rookie Parade parallels of Hudson Fasching, who was a Sabre only briefly enough to get on this card.

This package helped me get a lot farther on my modern sets without me lifting a finger (well, I will have to gather up some cards for Doug, of course). And that comes in quite handy when I'm focusing on vintage wants and Dodgers from past sets.

You can't beat trading for taking care of your dirty work.

Fuji said…
I'm the furthest thing from being a prospector... but I do enjoy opening Pro Debut... setting them aside for a few years... then going back and seeing which ones panned out.
September 16, 2018 at 7:58 PM

Johnnys Trading Spot said…
I prefer to get my team sets through trades, but I must admit that I'm generally inpatient and order the average brands off cardbarrel.
September 16, 2018 at 9:56 PM

GCA said…
Dang, I was just flipping through a whole monster box of Stadium Club at the monthly show yesterday, and there was Donruss, Optic, and some other minor league set next to it. Though that may have been Minor Heritage...
September 17, 2018 at 7:56 AM

kcjays said…
I usually don't mind the non-logo Donruss/Panini cards but for some reason this year they bother me. I can't decide whether I want to get the Optic Royals team set or not. Seeing your Dodger cards.... leaning further towards no. Always nice to see vintage O-Pee-Chee. I have to buy online or trade for my Royals. I don't think I've ever seen any at a show here in St. Louis.
September 17, 2018 at 9:17 AM

Mark Hoyle said…
N.O. Slowly going to the dark side. I don’t frequent Target or Walmart so I don’t know if my local stores have the Pro Debut but I do know my LCS doesn’t. Had. To go the team set route
September 17, 2018 at 9:36 AM

AdamE said…
Mark - Where do you buy your team sets from. I usually go the ebay route but maybe there is a cheaper easier way. I know I am way behind on picking up modern team sets. (actually I better shoot you an email, I doubt you see this)
September 17, 2018 at 4:39 PM

acrackedbat said…
BP was not where to be found in my neighborhoods so picked dime boxes for them. I love the all the color on these. Normally, this is not a product I purchase.
October 1, 2018 at 6:29 AM