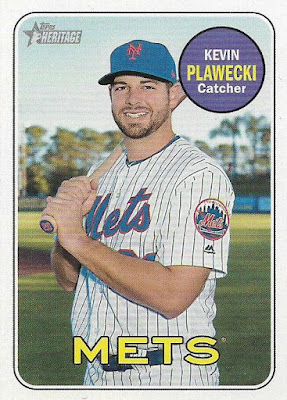 When I went to Target the other day and picked up a Fire blaster (OK, I think Topps Fire should come back for another year just because "Fire blaster" sounds so awesome), I had enough money left to grab a hanger box of Heritage High Numbers.

Heritage High Numbers hasn't done much for me since it returned to the retail aisles in 2015 (remember those awful years when it was just an online exclusive?). Every year I buy a rack pack or a hanger box and then that's it because it bores me.

I've tried to figure out why that is. For example, I find Topps Update at least a little bit interesting, why not High Numbers, which is basically the same thing without the bloat?

I think it might be because Heritage is all about the design for me. And we're still traveling in the '60s when it comes to Heritage designs and I'm not a fan of Topps '60s designs in general. I could handled the main Heritage set back in March. But now Topps is feeding us more of those '69 circles and I'm done. I'm pushing away from the table. No more for me.

Not helping matters is the Dodgers High Numbers checklist, which has been abysmal in recent years. Let's go through this year's checklist:

520 - Tony Cingrani -- got injured a couple months into the season and hasn't pitched since.
621 - Ross Stripling -- a decent spot starter for the Dodgers
638 - Logan Forsythe -- traded to the Twins
660 - Austin Barnes -- having a lousy year
665 - Chase Utley -- has basically disappeared since announcing that this would be his final season
713 -  Matt Kemp -- ah, finally, someone having a good year

Oh, did I mention that Matt Kemp is a short-print? The only Dodger in the High Numbers set that has really made an impact (we could throw Stripling in there, too) and he's an SP. Topps still up to its old tricks.

But anyway, I didn't pull any of Dodgers. Lots of Giants and Diamondbacks and other teams that make me gag, but no Dodgers. I was so unimpressed that I wasn't going to blog about the set. But then I figured every purchase deserves some attention so I struggled to find 10 notable cards to show. Here you are: 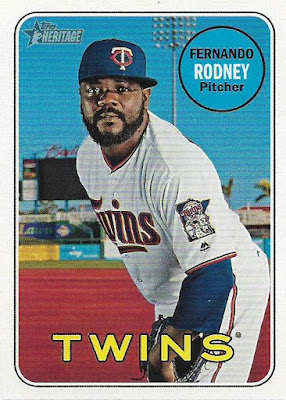 High Numbers wasn't quick enough for Rodney. He's already moved on to team No. 10 and the Oakland A's. Good luck in the playoffs with this guy. 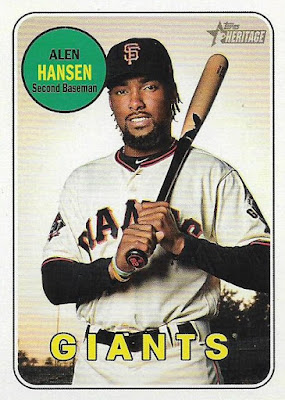 Some of the Giants cards feature a nice twilight glow in the background. I'm hoping that is a real background and not a phony image as it goes well with the Giants -- the sun setting on their season and all that. 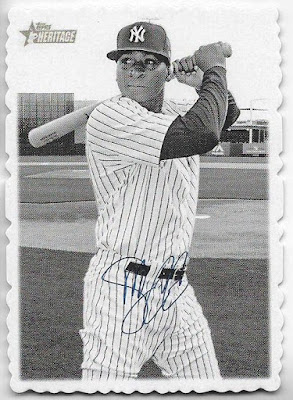 Yes indidi! (Sorry). I feel like I need to show deckle edge cards every time I pull them. They were kind of special when I saw my first 1969 Topps cards.

Lumping three rookies together (I've heard of them all!) because this is the underlying reason why anyone is buying this product, including me. We'll all just wait around and see if these guys blow up. 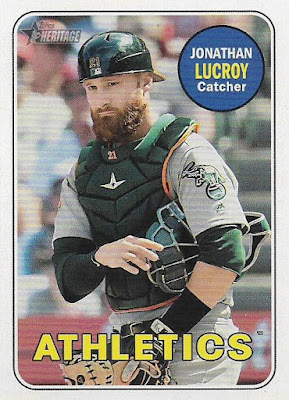 But this ain't it. Lucroy's variation card shows him ever so slightly more in action, waiting for a throw to the plate. That is some variation confusion. 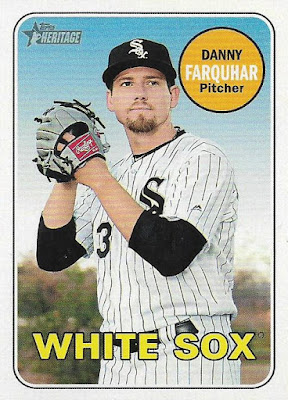 This card is interesting because Farquhar suffered a brain hemorrhage during a game this season and is out for the year. 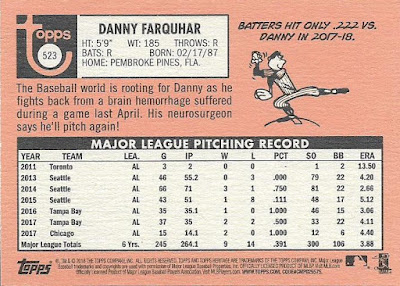 It's even mentioned on the back of his card. 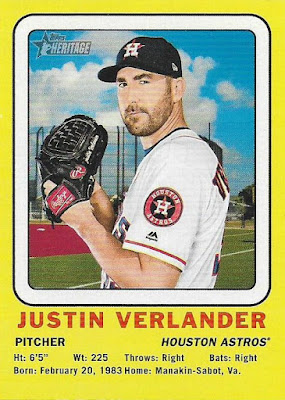 This is only interesting to me because I pulled this card one day after sending some Astros cards to Remember the Astrodome. I guess Mr. Upton stays with me a little while. 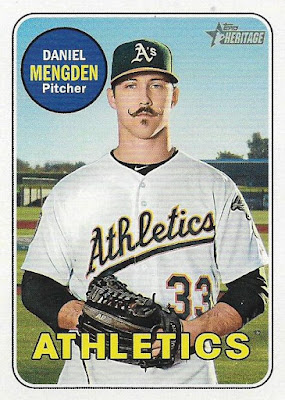 Mengden is channeling the memory of famed A's mustache-twirler Rollie Fingers. In fact, I think Oakland should require that at least one pitcher every year display a handlebar mustache in tribute. 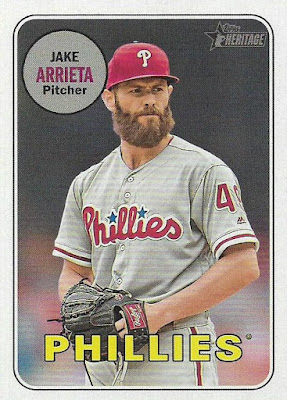 Here is the SP. I don't know if they're one-per-hanger box (I do know they're one every third pack). I like this card because I was ever so sick of Arrieta as a Cub. Short-sleeve meanie. 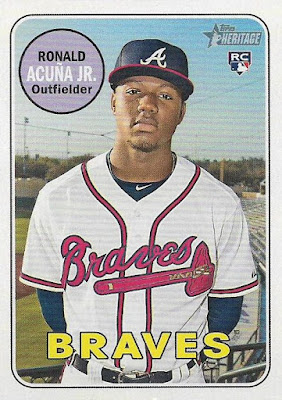 Ah, there was just one more rookie card in the pack. This card was staring up at me from inside the cellophane on the top of the stack.

Maybe there's one keeper in this box of Heritage High Numbers.

High Numbers is actually lucky that we enter the 1970s designs after this year. Because that may get me to buy a little more of this stuff in future years. And I still need to win the lottery before 2024 hits.

Adam said…
I'll probably bite on a hanger box or two some fat packs of High Numbers. I was really hoping for a Matt Harvey Reds card but sadly I don't think that's going to happen.
September 17, 2018 at 8:17 PM

steelehere said…
Here's hoping someone at Topps is reading this and considers hiring you as a consultant for their 2020 and 2024 Heritage sets. There's no reason Topps need to miss the fine details of 1971 and 1975 when creating the set.
September 18, 2018 at 1:31 AM

BobWalkthePlank said…
I was excited this year because Colorado Rockies reliever Harrison Musgrave has a card. He is a WVU guy!

GCA said…
"...because this is the underlying reason why anyone is buying this product,"

The main reason is current players in retro designs. Save the rookie hype for ... every other damn product out there.
September 18, 2018 at 7:57 AM

Apparently text bracketed by shifted comma and period is hidden in comments. Who knew?
September 18, 2018 at 7:58 AM

Bru said…
Oooh, I like that Verlander. I'll be excited whenever it does make its way down south.

I dig Mengden. He's a Houston kid, a fellow Aggie and was originally an Astros prospect before getting swapped to Oakland for Scott Kazmir in a 2015 deadline deal. He's been rocking the 'stache for a while.
September 18, 2018 at 1:19 PM

Nick Vossbrink said…
Is funny. I dig the High Numbers checklist much more than the regular one. But the way this season has gone all the Giants o the regular checklist sort of flamed out and the high number guys are the ones that have been memorable.
September 20, 2018 at 12:55 AM