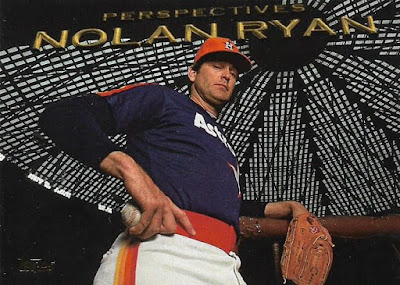 Earlier today I read a post on Torren' Up Cards about Kenny's blogging disaster in which he spent eight months -- eight months! -- writing up a post related to some cards he received from Johnny's Trading Spot and then accidentally deleted the entire thing.

Well ... since we're confessing about stupid blogging things we've done recently while showing cards from Johnny's Trading Spot, I have one.

Remember that "Best set of 1991" post I published a couple of days ago?

I already published one of those. About cards from the exact same year. Published it four months ago. Even worse, I selected a different "best set" in that post.

Welcome senility. I've been waiting for you.

I fully expect myself to forget things. That's why I use labels for my posts so I can remind myself on whether I've written something already. But the labels failed me and when I clicked on the "best set series" labels, the most recent post that came up was from last May when I covered the sets from 1990.

So I dutifully did everything I did already four months ago, pulling cards from the same sets, writing basically the same thoughts that I did four months earlier. The weirdest thing about this is that nobody else seems to remember I already wrote that post either. The more recent "Best set of 1991" received much more reaction than the previous '91 post, and maybe everyone is just being nice, but the comments didn't give any hint that this post was a repeat.

I was so horrified when I found out (I'm being flip here but there's a tinge of seriousness given my mother's recent short-term memory issues and my grandmother's well-known memory problems, guess what's in my future?) I instantly deleted the previous post from January. It's gone.

To make it up to you, I'll be writing a "Best set of 1992" post fairly soon. I just need to wash away the whole ugly affair.

Meanwhile, like I said, I have a whole bunch of cards from Johnny's Trading Spot to display.

I received four healthy stacks wrapped in newspaper -- as many of you did. Most of the cards I owned already, that's just the way it is when you've been blogging and collecting for as long as I have. This is the breakdown: 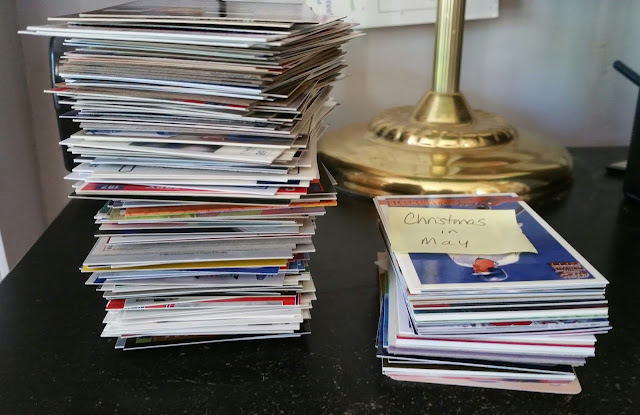 Cards I needed on the right.

But that's plenty. Oh, that's plenty. The cards on the left will go to other Dodger causes (there's this dude trying to accumulate one million Dodgers). I have 26 binders filled with Dodgers cards. Space is at a premium.

It took me more than hour, however, to determine exactly what I needed. I can blame part of this on senility's arrival, but I mostly blame it on the 1990s. The moment I turned my back on the hobby in 1994/95, the card companies went on a card-making bender. 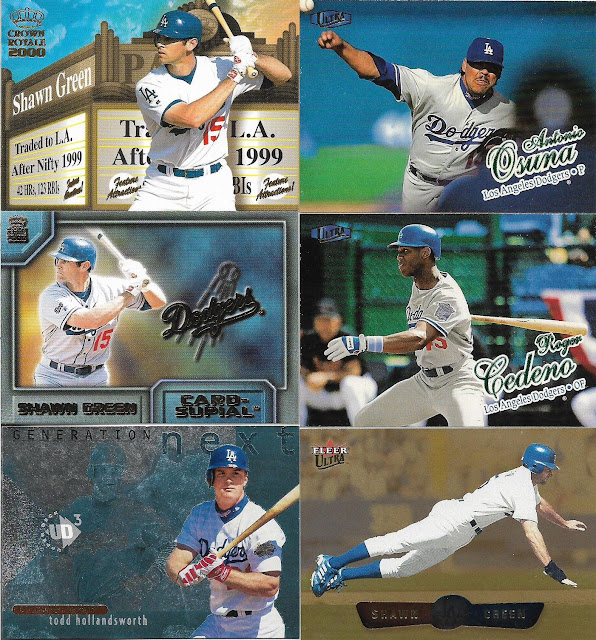 There you go. Most of those are from the '90s. After a number of minutes, I finally figured out I needed them all. 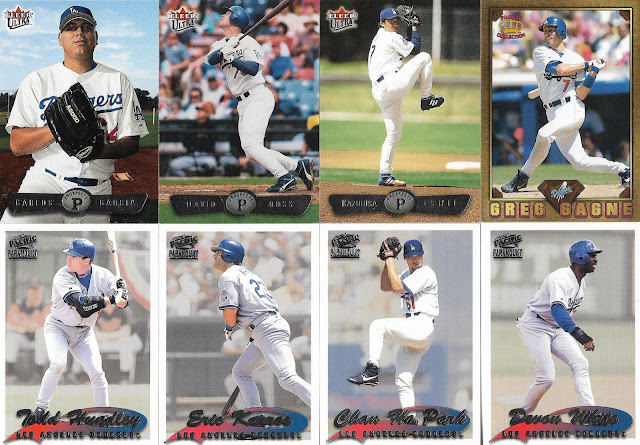 Kind of all from the '90s, or the turn of the century (some 2003 Ultra up top). Senility or not, I knew right away that those 1999 Pacific Paramount cards had never visited my collection before. 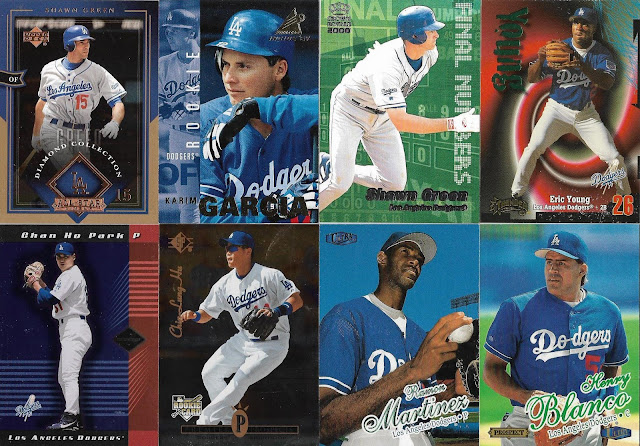 This is a combination of '90s/'00s cards that I either knew right away that I needed (a green Green!) or it took many binder openings and closings before finally figuring out they were needs. 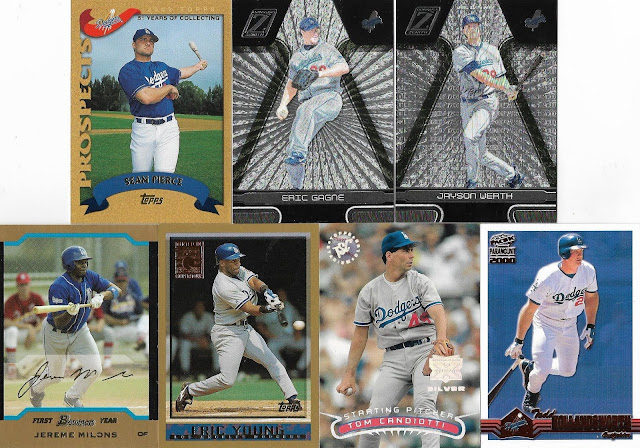 A sure-fire cure for senility is to throw a parallel at me. "Well!" I'll respond instantly, "I certainly need that one! It's a blasted parallel!" 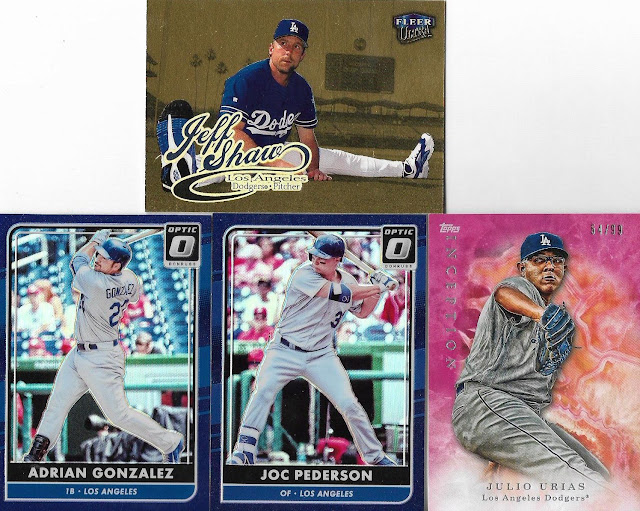 A combination of the wonderful Jeff Shaw Ultra parallel card with some more modern parallels. The Urias Inception card has really fancied itself up, but it still loses the beauty competition to the Shaw card. 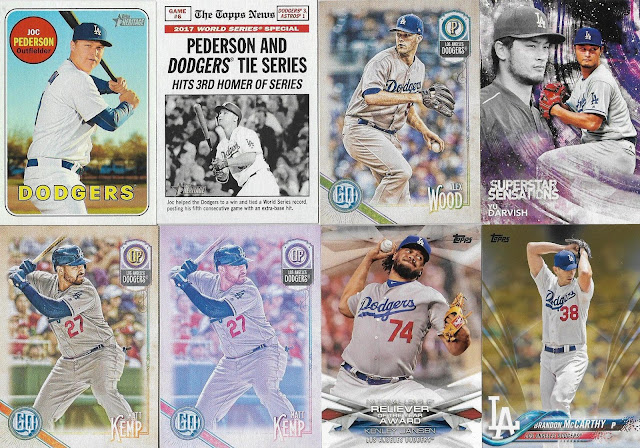 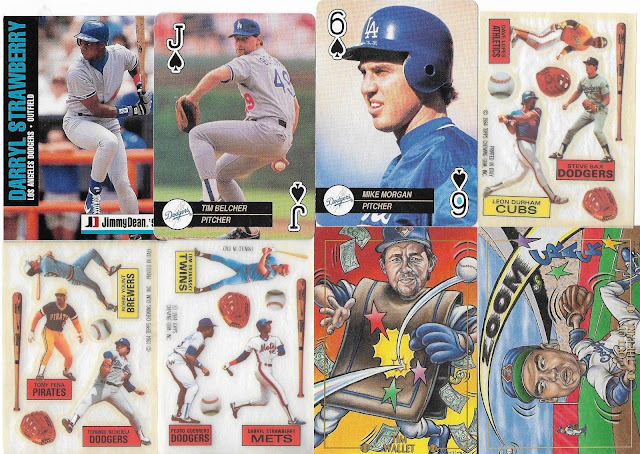 Oddballs! All needs, although I probably have the rubdowns already. I've never thought to put them with my Dodger cards until receiving them all at once like this. 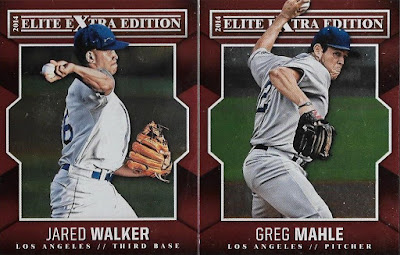 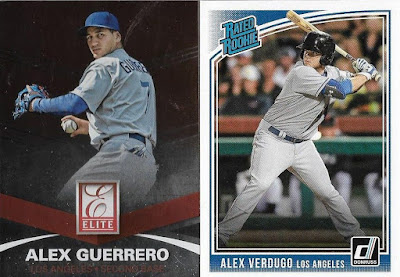 Some unlicensed needs. Not very exciting are they? 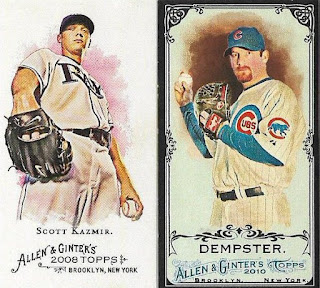 Johnny came across a bunch of tobacco minis and checked with me before sending them. These two I picked out as needs. 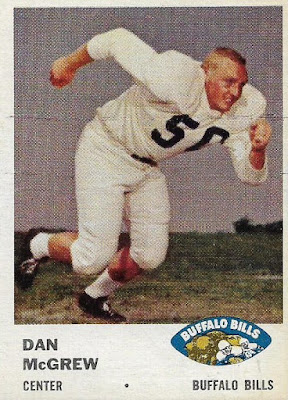 So those are just about all of the cards (I got a little sick of scanning after awhile) that I know I need.

It seems somewhat tedious figuring out what cards you need, especially when it comes to '90s cards, but I'm willing to bet it helps keep the senility at bay reminding your brain what you have and what you don't.

Either that or all my card knowledge is pushing other valuable stuff out of my brain -- like "posts I've published already."

Zippy Zappy said…
Honored that you read my gibberish in the morning.

Fuji said…
There's nothing wrong with writing two very similar posts... and there's nothing wrong with picking two different sets as your favorite either. Things change over time. Two years ago, I hated 1991 Fleer. These days I embrace it. But I feel ya on the senility thing. One of my co-workers and I were talking about how dementia runs in our families... and how we both notice our short term memory sucks. I actually started doing sudoku again, because my dad says it's suppose to help.
May 20, 2018 at 9:51 AM

Kevin said…
Its funny because i thought, didnt he already do this...the ranking of the yearly sets is one of my favorite posts...then i clicked on the category and i was like wow, has it really been a year since i last tead one of these
May 21, 2018 at 1:03 AM