History in the wee hours

I didn't think I could ever get excited about a combined no-hitter.

It's not a new phenomenon. There were several before I was born or actively interested in baseball. The first time I really took notice was when the Orioles used four pitchers to no-hit the A's in 1991. "What was that?" I observed. "Is that a real thing?"

Since then the Dodgers have been no-hit by a Mariners pitching assortment and now have thrown the 12th combined no-hitter themselves and for the first time in their history. No-hitters against the Padres still do count, I'm told, and it was the first MLB no-hitter thrown outside the U.S. and Canada.

This all happened late at night, making for a fun-filled last few minutes at work between this and Albert Pujols' 3,000 hits.

I was pretty excited that Walker Buehler was involved and gets the most credit for the no-no. I don't know about you but when someone does something notable, particularly when it involves someone not that established in the majors, I rush to my collection to see which cards I have of the player.

It turns out I have 15 cards of Walker Buehler. That's the same amount as the player listed before him in my card collection spreadsheet, Steve Buechele, and seven less than the guy that follows Buehler, Mark Buehrle. Watch out, Buehrle, Buehler will catch you fast.

I already own a signed Buehler card, thanks to one of his biggest fans, Zippy Zappy. 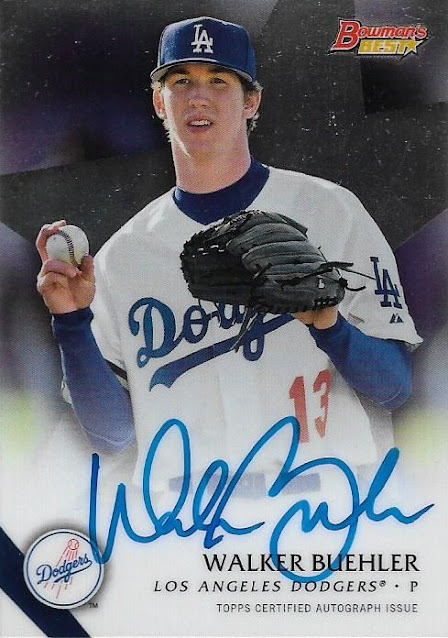 The earliest cards of Buehler are from 2015. Bowman, of course. 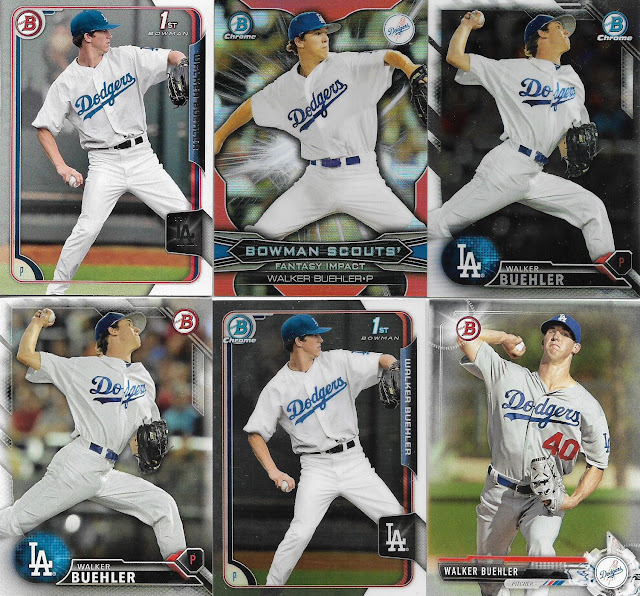 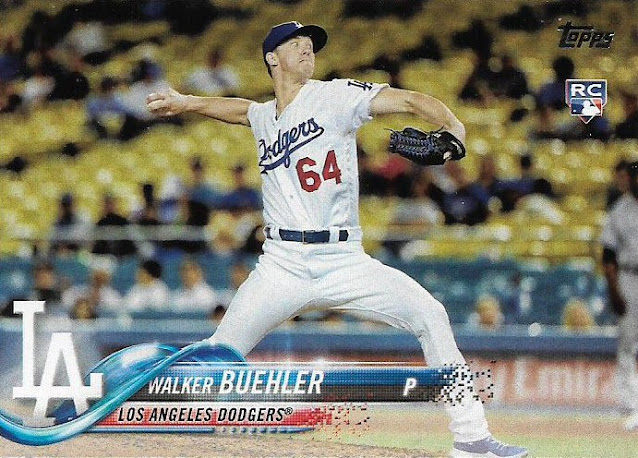 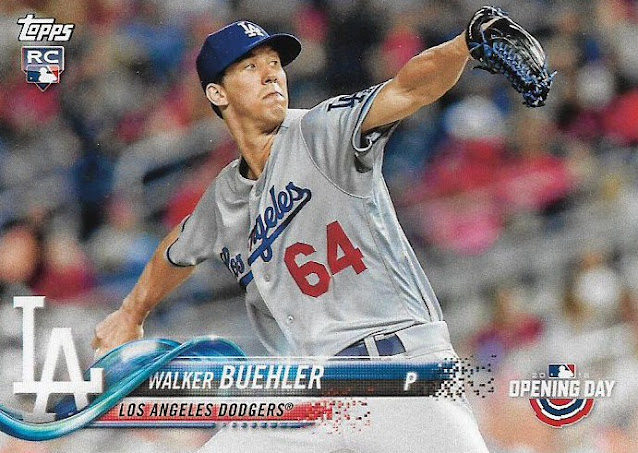 Here are his current cards from 2018 flagship and Opening Day. I like the different photos used for the rookies. 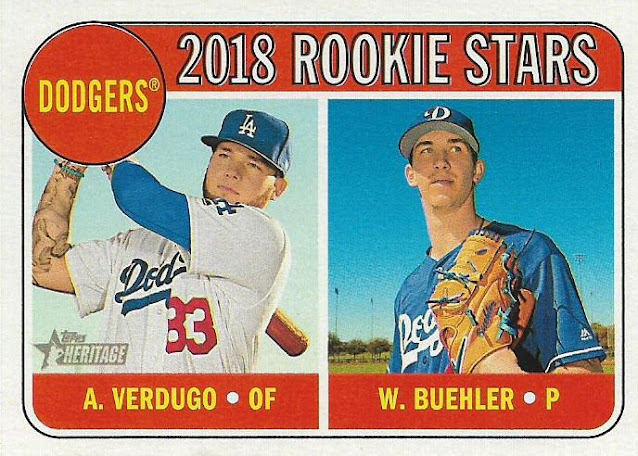 Heritage forces Buehler to share space with another "star," who is also playing for the Dodgers now because half the team is on the DL. 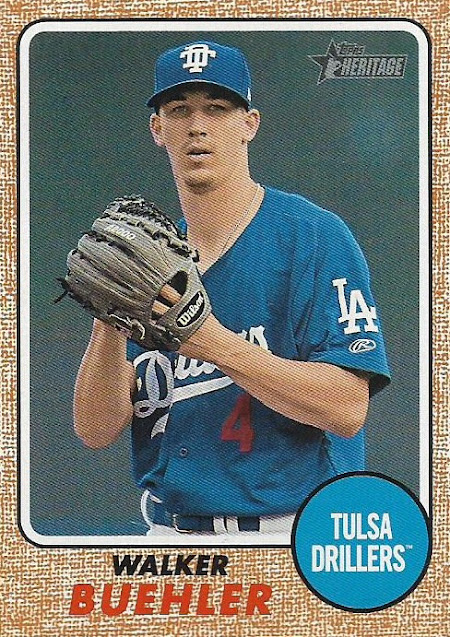 I also count minor league cards in my player totals. 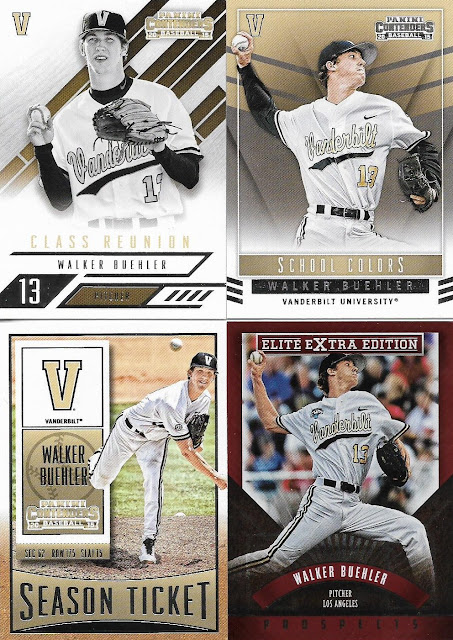 And even college cards. I don't know anything about college baseball, but the Panini Contenders cards from a few years ago were pretty nice.

The rest of the no-hit crew doesn't turn up much in my collection. 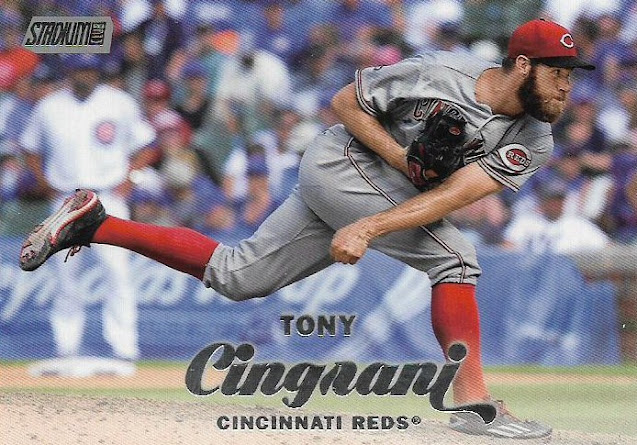 All of my Tony Cingrani cards are from his Reds days and I have very few of them. Topps is always reluctant to get middle relievers onto cards. 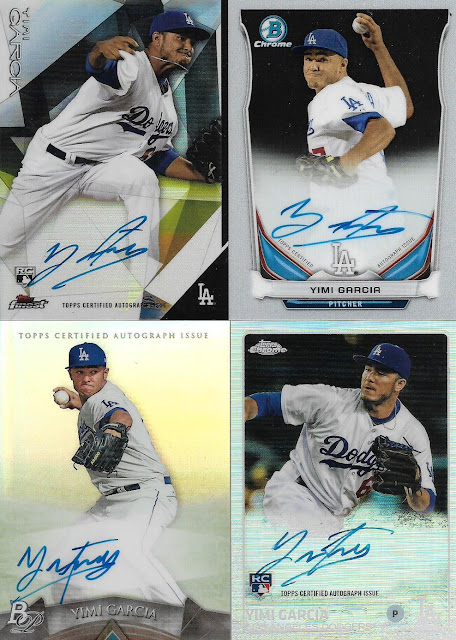 Yimi Garcia is a different story. I have 22 of his cards. Topps declared him a rookie darling a few years ago and asked him to sign a bunch. He promptly came down with an arm injury -- I don't think it was all that signing-- and then disappeared for years because returning and getting in on history. 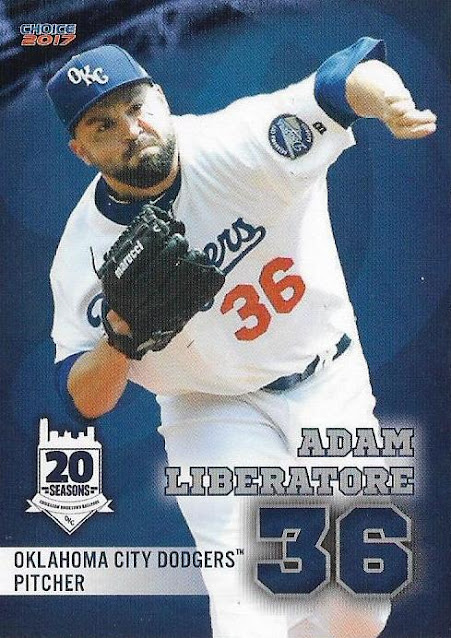 The last reliever, Adam Liberatore, has one Topps card, from 2015 Topps Update. But I also own his Oklahoma City Dodgers card from last year.

So two whole cards for Liberatore. But he got to celebrate the final out of a no-hitter. In Mexico. Think of all the pitchers who have never gotten to do that, and I have so many more cards of them.

It was all pretty cool and I quickly changed my desktop picture on my work computer before I left last night. 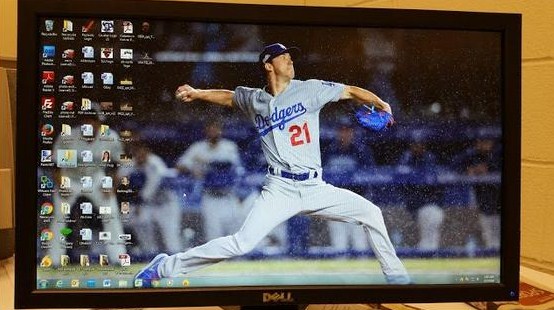 Life moves pretty fast. If you don't stop and look around once in awhile you could miss it.

steelehere said…
That 2017 Bowman card of Buehler where he's wearing a Dodgers road #40 uniform looks like it was photoshopped to put the Los Angeles script and the red #40 onto a gray jersey.
May 5, 2018 at 7:45 PM

Anonymous said…
It's probably just my perception, but it seems like there are several hundred Major Leaguers who played for Vanderbilt.
May 5, 2018 at 11:16 PM

Fuji said…
Uggh. It had to come against the Padres. The only MLB team to never throw a no-hitter. I mean... the Giants have thrown five in the last nine years. The Dodgers have thrown three in the last four years. Heck... even the Oakland A's threw one a few weeks ago. It's official the baseball gods hate the Padres.
May 6, 2018 at 10:44 PM

Henry Blanchette said…
Sometimes, I don't really understand combined no-hitters. I mean, if your starter is no-hitting a team, and he didn't get injured, why take him out?
May 8, 2018 at 6:34 AM