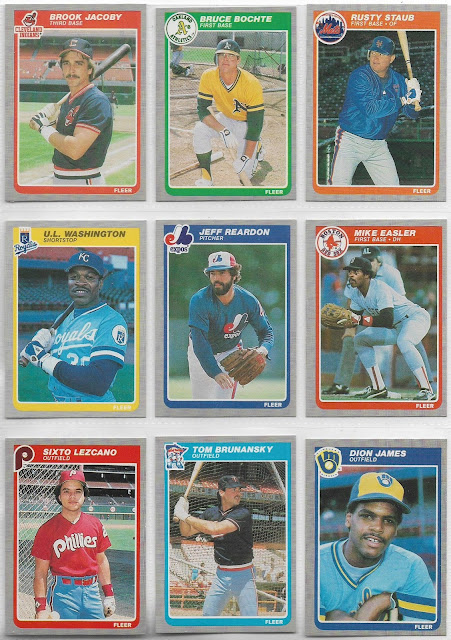 I will always give Fleer full credit for numbering its flagship sets in order by team finish. It's a wonderful organizational tool that has saved me time repeatedly and provides an interesting perspective on the season just passed.

The only time it fails is when a colorful cavalcade of a set like 1985 Fleer comes along. How wonderful would it be to stare at page after page like the page above? As someone used to seeing 1972 Topps and 1975 Topps in a binder -- colors intermingling with each other for a series of nine-page rainbows -- I think such card displays are a mind-bending delight.

But that's the only fault I can find in 1985 Fleer because I've recently discovered that I love it. 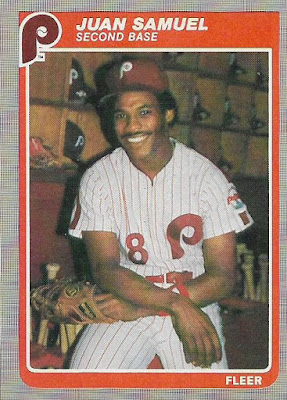 I have mentioned time and again how unfamiliar I have been with mid-1980s Fleer over the years. I quit purchasing packs cold in 1985 and 1986. Because of this, I constantly confused 1985 Fleer with 1986 Fleer.

That's a bit of an insult to 1985 Fleer because '86 Fleer, man, is not that exciting. I know this because I'm still going through all of the Fleer sent my way by Johnny's Trading Spot. After putting the '86 Fleer cards to bed, I started on 1985 and what was that set that I just filed away? 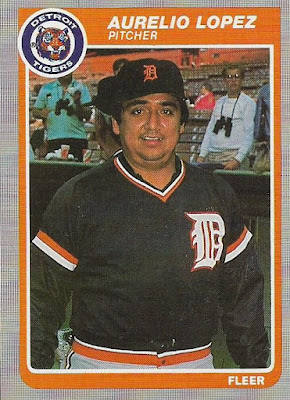 My favorite Fleer set has been the '84 set and I still don't quite see '85 knocking '84 from its perch, no matter what my blog title says. But 1985 Fleer contains all the great, wacky, bizarre photos that 1984 does, all  within a color-coded border that gives the set character. Add the logo in the top left corner and this is a perfect ode to mid-1980s baseball. 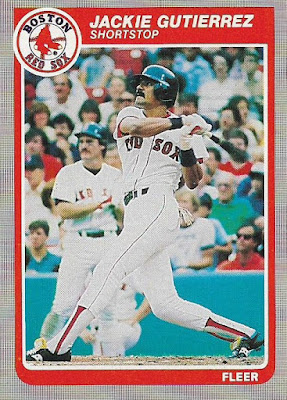 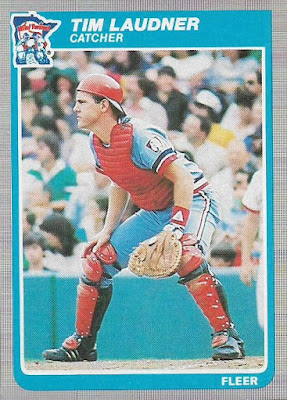 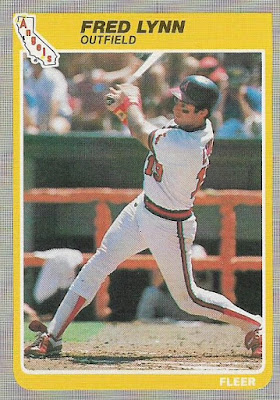 These are some well-framed action shots from the set. They make me smile, not just because they are players I knew growing up but because the frame adds impact to the photo.

I like my frames because that's what pictures have -- frames. Hang those babies up on the wall. Let's see what mid-1980s was all about. 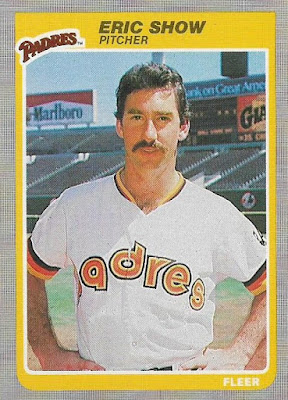 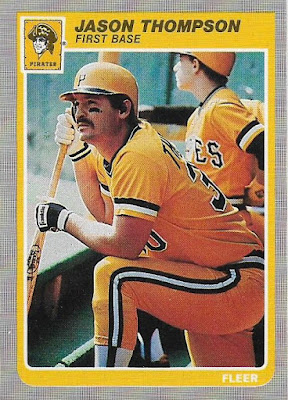 The banana uniforms. Without a doubt, it was about that. 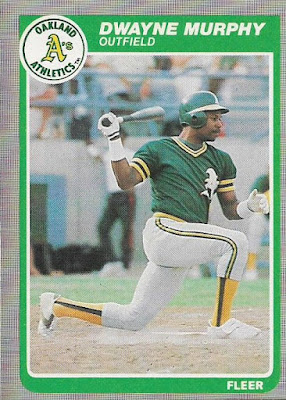 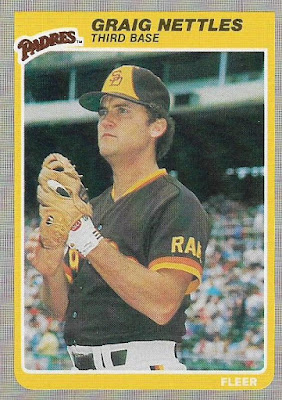 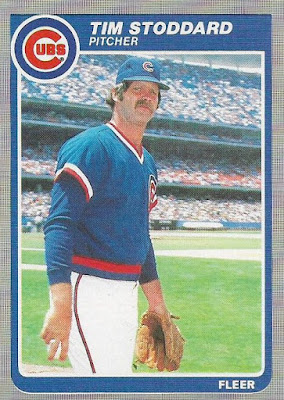 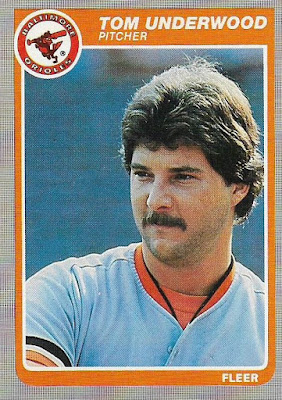 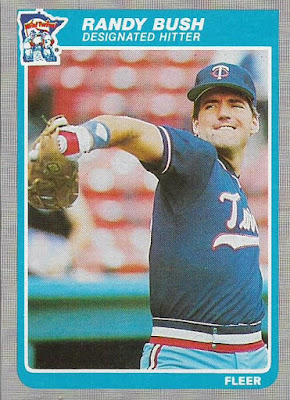 And off-center photos. It wouldn't be Fleer without those.

Many collectors regard 1985 Fleer as the set that produced rookie cards for Roger Clemens, Eric Davis and Kirky Puckett. And then they run out of words.

It is so much more than that. 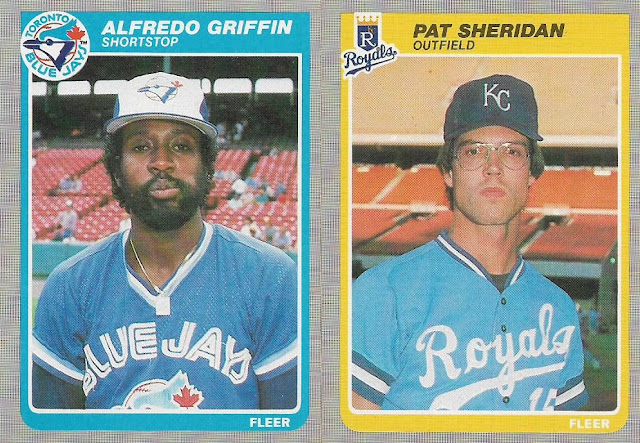 The mid-1980s was a tough time in baseball. The Pittsburgh drug trials were in the paper almost every day as fans learned which of their heroes were spending time in the hotel room snorting cocaine.

The first stirrings of owner collusion occurred in the mid-1980s. Labor strife was still a very real, daily part of baseball four years after the strike. 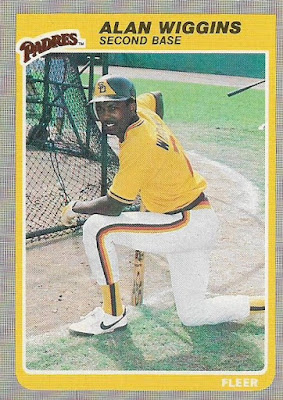 For me, 1985 Fleer brings out those desperate times better than any other set issued then. The odd photos. The darkened pictures. The dead stares. The awkwardness. Baseball was struggling to find its place at that time. 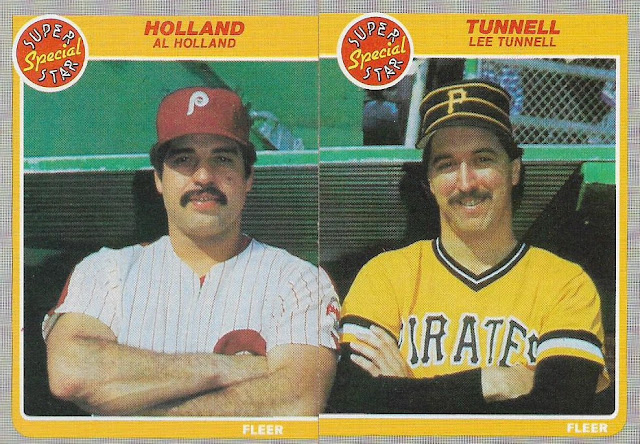 Fleer tried to find some humor in it all, even if it was forced. 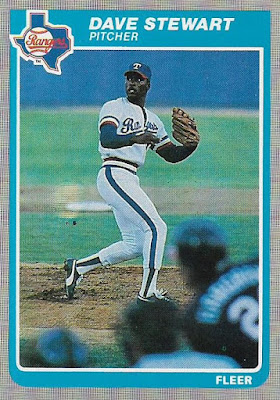 Today, I am looking forward to completing 1985 Fleer more than any of the other Fleer sets that I am currently trying to finish. 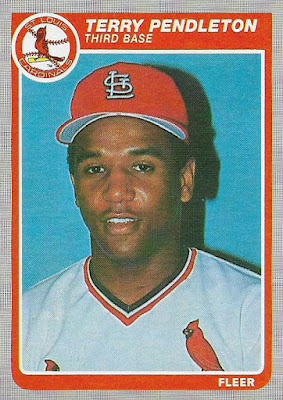 Each and every card, no matter how poorly photographed, is a gem.

I expect Clemens, Davis and Puckett to be the last cards that I obtain. 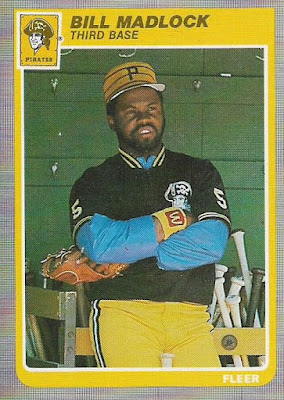 Never. (is that a McDonald's wrist band?)

Johnnys Trading Spot said…
You know I never put the "split" cards together before. I totally get the fun Fleer had with the Holland Tunnel.
May 10, 2018 at 8:05 PM