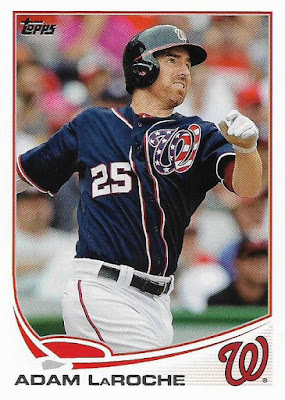 Several of the Rite Aid chain drug stores in the area are closing, including the two right in town. Walgreens bought Rite Aid a few months ago and it was only a matter of time before the local Rite Aids would be shutting down.

This is not good news. I grew up buying baseball cards at the drug store. Some of the major card-buying moments and acquisitions from the first 20 years of my collecting career came from drug stores. I can see the insides of those various stores right now, where the card boxes were positioned, everything. When it comes to traditional card purchasing, you will never be able to convince me that big-box stores are the better way to go.

So, Rite Aid has carried that nostalgia for me, even though they haven't been an impressive source for cards over the years. A number of years ago, I snagged from Rite Aid some Chrome cards. That may have been the highlight. Much more recently, Rite Aid's been OK for repacks.

Upon hearing the news of Rite Aid's closing (they'll be shuttered by the end of next month), I headed out to find a couple of deals. School supplies were 50 percent off so half-off binders are always key. But mostly, I wanted to grab some cards as a final tribute to the store.

Hanging from the lonely display off to the far end of the front register where nobody goes, were a smattering of various trading cards. The baseball items were 2015 and 2016 Topps (no need for either), and a couple of Fairfield repack boxes.

I bought just the one Fairfield repack, being somewhat concerned that the guaranteed sealed pack inside would be Panini Triple Play.

The box didn't yield anything exciting, but as always it provided some good entertainment and some cards that I needed.

Although a 1984 Topps card marked the oldest item in the box, I found relatively little junk wax in this repack. The overproduction highlights for me were: 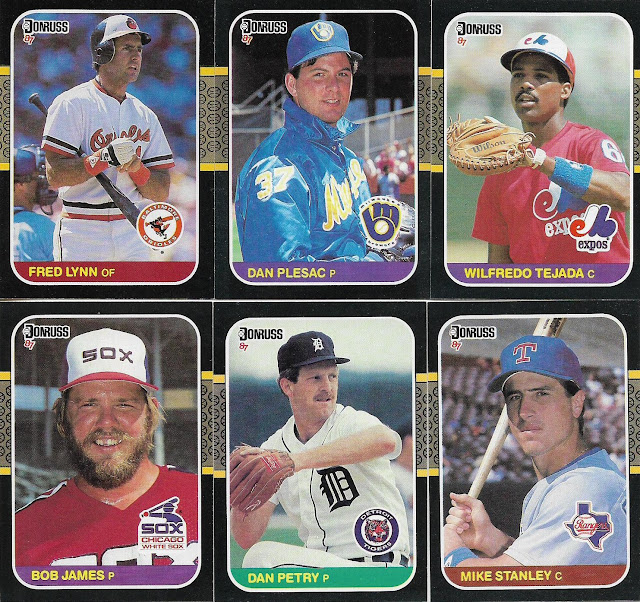 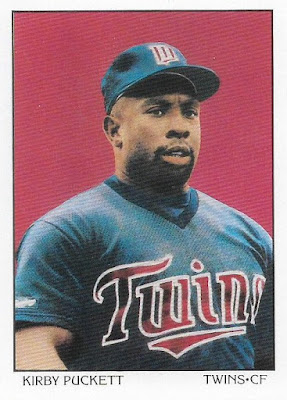 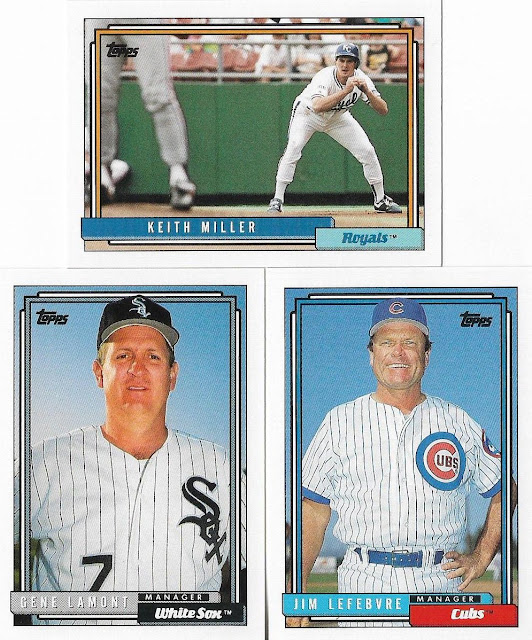 I don't know if this really counts as junk wax, but three 1992 Topps Traded cards, including South Side and North Side managers. 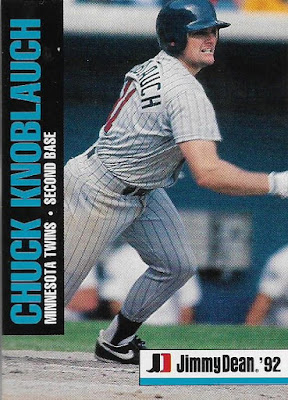 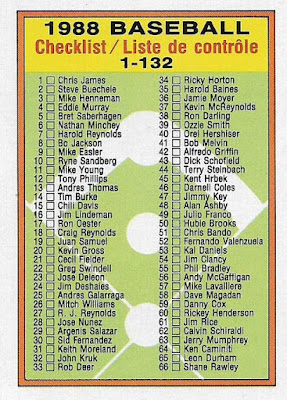 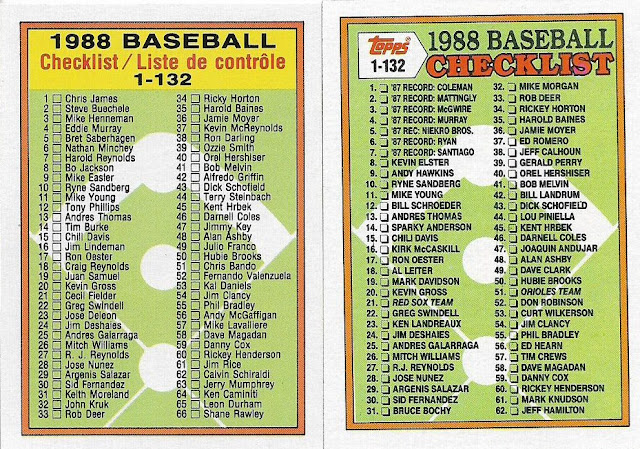 There are differences everywhere. About the only cards that remain the same between the two are the players whose card numbers end in "0" or "5". 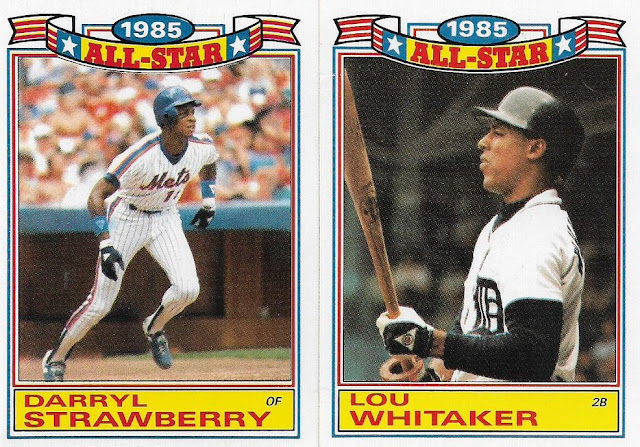 Unless you're counting the 1988 Donruss Paul O'Neill card I pulled -- and why would you unless you were me -- this was the other highlight of the '80s cards from the repack. The glossy all-stars from the '80s are almost guaranteed in each Fairfield repack, but they were pretty special back then and they still retain that feeling of something worthwhile. 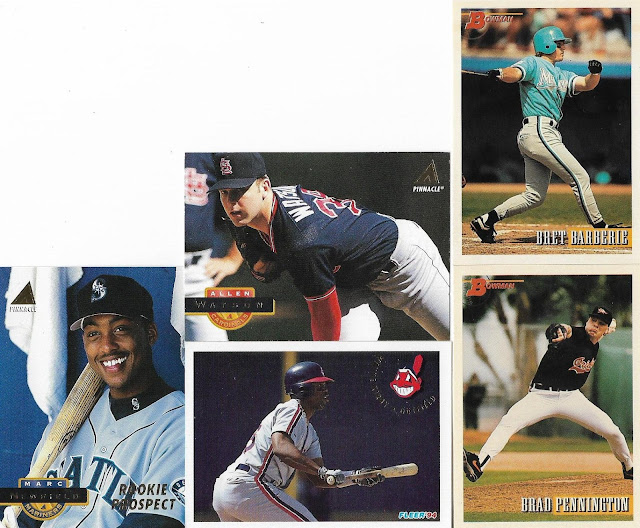 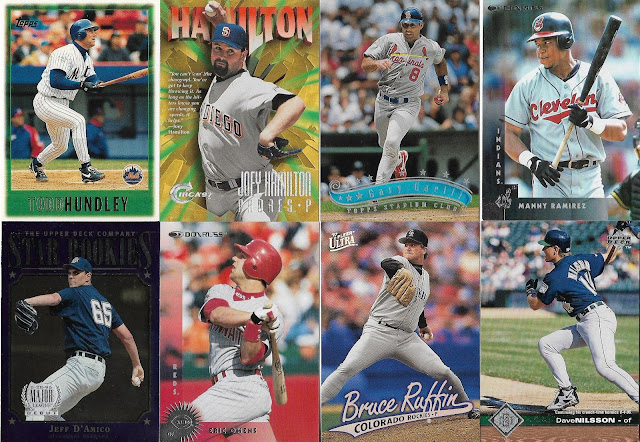 That's a lot of '90s cards that I didn't have before walking into Rite Aid. 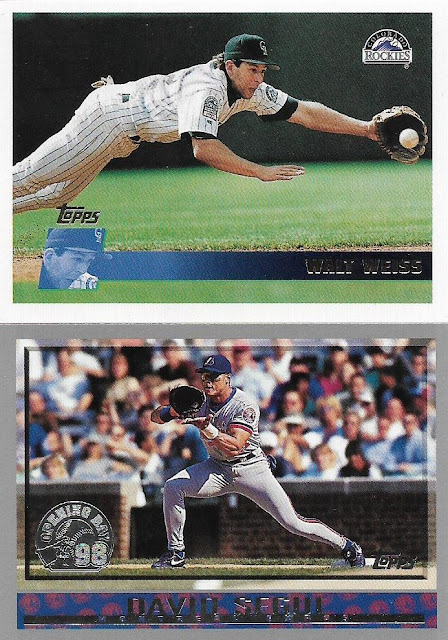 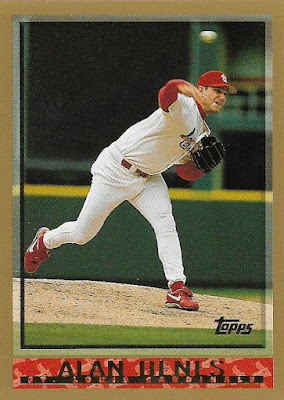 I'm most pleased about this '90s card. I interviewed Alan Benes back in the late '90s when he was considered a notable pitching talent for the Cardinals. The back of this card even says he was "headed for Cy Young contention" in 1997 before injury hit. I can't say I remember that although that was the same year I talked to him.

Some more recent cards from my very neglected 2008 Topps set. 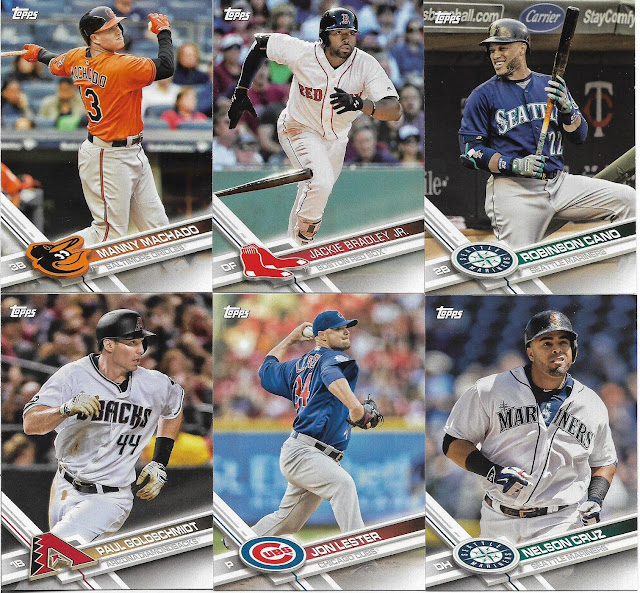 These are all American League and National League team set cards. I don't know when Topps removed the AL and NL logos from these cards but it sure is confusing when the photos look the same as the flagship cards.

The repack continued along like that as I found a couple of needs from 2013 Topps flagship and a fun card or two from random sets like '87 Fleer and 2000 SPx.

It may be the last purchase I make at Rite Aid, at least where I live. And now within the last two years, I've lost retail options with both Kmart and Rite Aid closing.

I'm not too shattered because as I've documented a few times before, Walgreens also features cards for sale, including these very same repack boxes.

Plus, Rite Aid didn't exactly give me a pleasant going-away gift with the guaranteed sealed pack. 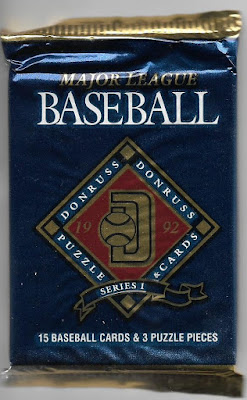 Objectively, 1992 Donruss is much better than Panini Triple Play, I will admit.

However, it happens to be a set that I loathe irrationally.

In fact, rather than sullying this blog with more 1992 Donruss cards, I'll probably open it on A Pack To Be Named Later. I see that Series I hasn't been opened yet on that blog.

So long, Rite Aid. You were good for scratching the pack itch and for reliving my drug store card-buying days.

That's the best compliment I can give you.

SumoMenkoMan said…
A nice little walk down memory lane...too bad your local store is closing though. Such are the times I guess.
May 28, 2018 at 8:00 PM

acrackedbat said…
It surely won't be long before my town - population 3100 - loses at least one of its TWO Rite Aids. They are two miles apart. This has always seems very odd to me. (My SMALL TOWN also has a CVS.) My only repack was purchased at the Rite Aid. I don't have the memories tied to small retail outlets other than buying in the 90s from 7/11.
May 28, 2018 at 8:01 PM

Brett Alan said…
My main memory of Rite Aid is from when they bought out Eckerd. In my town there happened to be a Rite Aid and an Eckerd across the street from each other, and for quite a while they were both a Rite Aids. Someone dubbed them "Rite Aid and Left Aid."

Left Aid is now a thrift store (which never has cards). I wonder whether Rite Aid will stay open as it's a good distance from the Walgreens.
May 28, 2018 at 8:10 PM

steelehere said…
For what it's worth, the Walgreens' purchase of Rite-Aid wasn't approved by regulators. A few months ago, it was announced that Rite-Aid would merge with Albertsons' grocery stores. In California at least, it means we'll still be able to get Thrifty Ice Cream at the grocery stores at a minimum.

BobWalkthePlank said…
Both the town I grew up in and my current home were both Rite Aid towns. Lots of memories buying cards at each. The other local Walgreens and CVS don't sell cards so that may end the drug store source for cardboard.
May 29, 2018 at 8:59 AM

mr haverkamp said…
In my hometown, "Rexall" was the drugstore of choice during my 75 Topps mini-chasing youth. Huge candy aisle stocked with cards of the day fully in view of the cash register jockey (to discourage shoplifting, no doubt). I wonder which drug conglomerate gobbled them?
May 29, 2018 at 5:31 PM

Kin said…
Not going to lie, I didn't know that Rite Aids were still out there. I've lived the past decade+ in Indianapolis and Texas and never saw one. I certainly had my share of cards from there. I've always been an introvert and in high school, my best friend was a neighbor (husband of a cousin) that was a district manager at Rite Aid. Sometimes I'd go in and do odd jobs to make a few bucks. Usually it was spent on cards. Also, when they'd destroyed the old "Baseball Cards" magazines, they'd take out all of those card panels and give to me. Good memories!
May 29, 2018 at 8:17 PM

Fuji said…
I felt the same way when the Longs Drugs store I used to walk to when I was a kid closed its doors 12 years ago. At the time I wasn't collecting... but it was still sad. My buddies and I would walk there to play Pole Position on hot summer days. It's also the place my friend and I got caught stealing a box of 1986 Topps from. Lots of memories.
May 30, 2018 at 1:12 AM

defgav said…
Longs was my local drug store as a kid, too. But my LCS was in the same shopping center, just a couple doors down, so I never bought much cards at the drug store. Still though, I was sad when it became a CVS.
May 30, 2018 at 5:40 PM