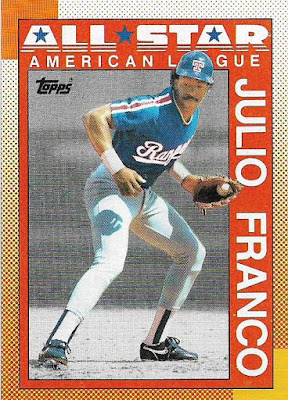 I have never consciously attempted to complete a run of Topps flagship sets. As a set-collector, it just kind of happened.

Except for one tiny issue.

I've never tried nor wanted to complete the 1990 Topps set.

I don't out-and-out hate the set, even though when I bought 1990 Topps for the first time that year, I wanted to throw them out as soon as I saw them. The 200 or so cards from that set I own sit in a binder, which means that someday, someway I may actually try to complete that set.

A few weeks earlier I had been reading the blogs when I came across a post by Brad's Blog. He mentioned that his wife wanted the thrill of pulling a 1990 Frank Thomas no-name card, so she bought four boxes of 1990 Topps from a dealer. That might be the coolest thing I've ever heard of a wife doing (outside of buying me a Ron Cey-Fleetwood Mac lamp).

Inspired, and realizing how stupid I would sound saying "I have every Topps set completed from 1971 to 1991, except 1990," I took Brad up on his offer. He was willing to send out a bunch of extra 1990 Topps that had accumulated in the unsuccessful search for Thomas no-name to anyone who asked.

I know this sounds like insanity -- actually asking for 1990 Topps -- but it's not like I was paying for those garish cards.

Last week, a box arrived on my porch. Man, was it heavy. I opened it up and it was 12-plus pounds of cards! 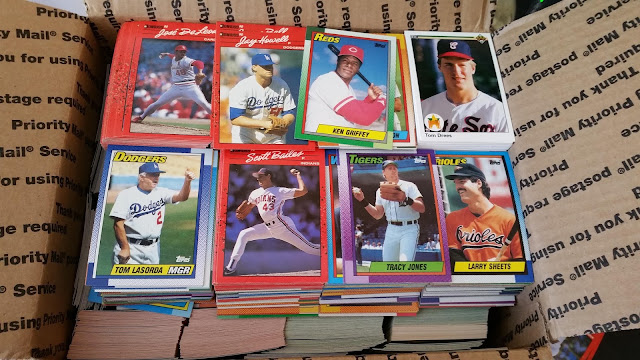 That's right. Twelve-plus pounds of cards from one year and one year only, 1990.

Fortunately, the non-Topps '90 cards made up just a small part of the box.

The whole rest of the box looked like this: 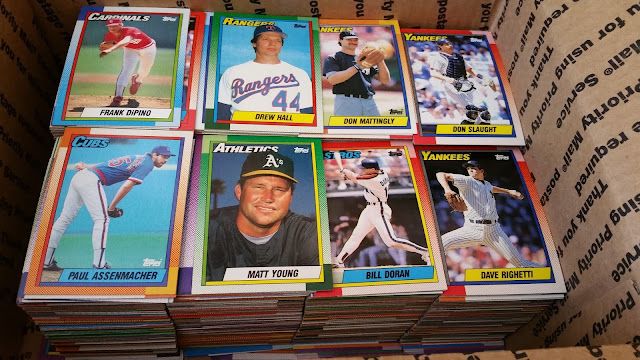 Wild colors that don't go together for as far as the eye can see. A bottomless pit of 1990 Topps.

I don't know how many cards of this stuff that Brad sent, but it was a lot more than 792 cards, I know that.

So, I knew I had quite the sorting task on my hands to see whether I had complete the 1990 set thanks to this 12-pound box.

Sorts like this take up a lot of time and space. Fortunately, the other people in the house went on an out-of-state trip over the weekend, leaving the dining room table free for a multiple-day, card-sorting task.

After sorting through Thursday, Friday and Saturday, I had almost the entire 1990 set. 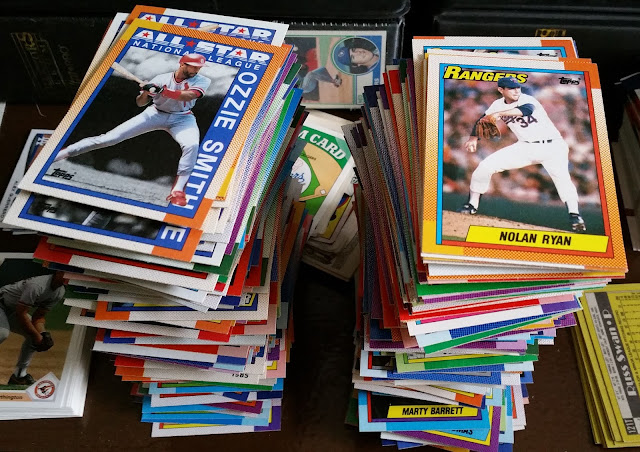 It's just begging for a binder.

But the set still wasn't complete. I had determined that 12-freakin' pounds of cards doesn't finish a set, and I was 21 cards short.

Brad took care of one of those cards with a separate item in the box: 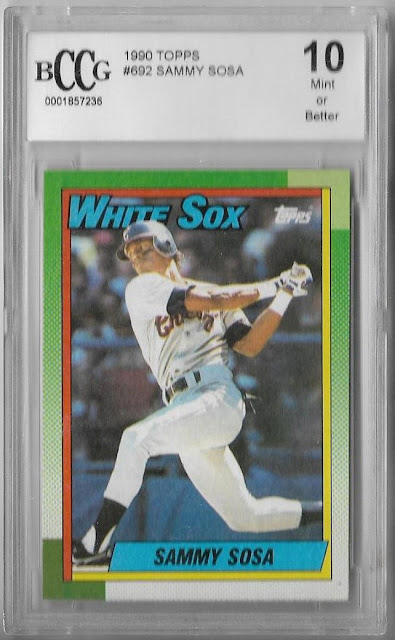 Sammy Sosa will be breathing the fresh, clean air very soon, mint 10 or not.

For the remaining 20 cards, I took my pen-scrawled want list to the binder with the 1990 Topps I already owned and hoped it contained all of those cards.

I was able to cross off several key cards, Randy Johnson, Frank Thomas (not the no-name one), Ken Griffey Jr., Eddie Murray, Walt Weiss. I crossed off 11 cards total.

But that left nine cards remaining:

Now, don't go running toward your silo full of 1990 Topps to find these cards for me. I already mentioned the nine I needed on Twitter and several collectors pulled a muscle trying to rid themselves of some 1990 Topps.

I'm getting all nine cards from one collector and then I can say I've at least completed 1974 through 1991.

I thought after sorting through all of those cards that I might grow sick of them. You know how 1990 is with sickly green paired up with orange and purple joining red. But, instead, my admiration grew for the Lichtenstein set with cards that look more like a comic book than any other Topps flagship set.

Some of the cards actually look quite nice. Here are just a few: 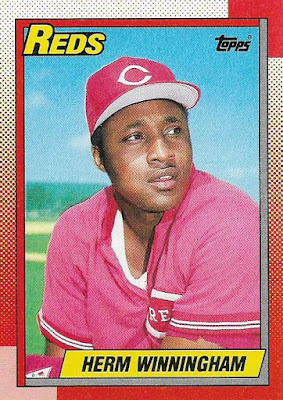 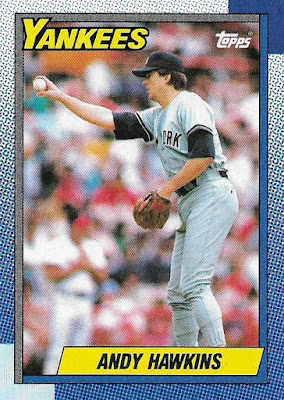 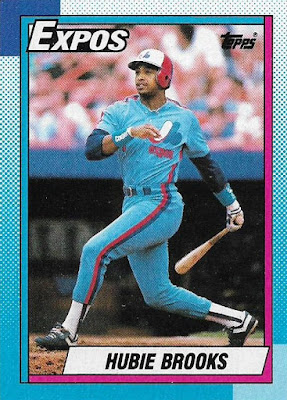 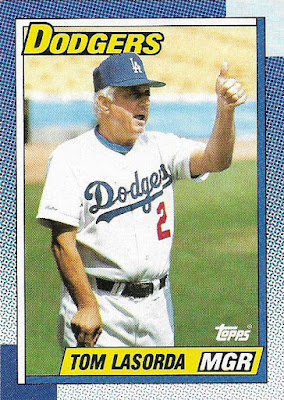 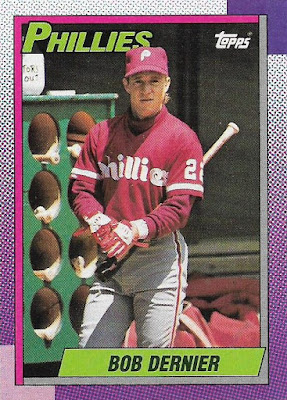 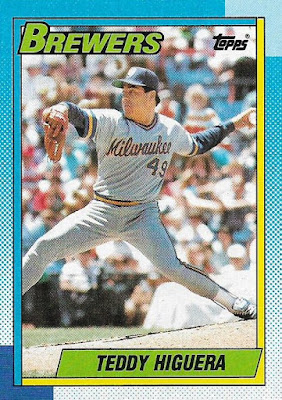 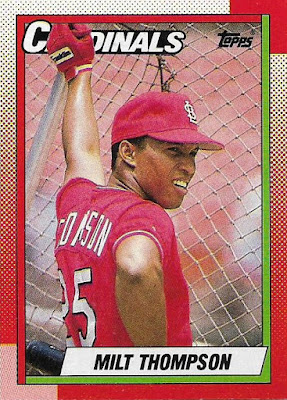 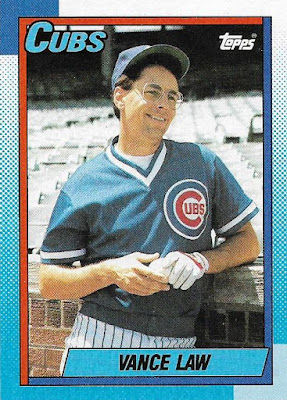 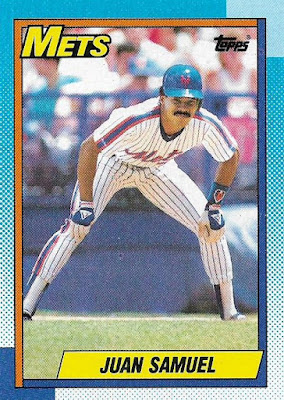 So that giant box of cards will accomplish what I wanted to accomplish. It will lead me to completing the 1990 Topps set and erase that glaring gap in my series of completed sets.

Of course, I do have a number of extras left over. I don't suppose anyone wants any 1990 Topps, but on the off-chance someone is crazy enough I have a few hundred extra.

I also have quite a few 1990 Donruss, Fleer and Score that's just waiting for someone to say the word. I don't ever plan to complete those sets.

Jeremya1um said…
My boss has been going to flea markets and has been bringing me some cards lately. He got me the '90 Topps set a few weeks ago. Wish I would've known you needed it. I was probably less than 50 cards from completing the set before I got the set, and I could've just sent you the whole set. If you still need any i can totally send you what you need, and I'm probably close to having an extra set or two from 1992 as well.
March 28, 2017 at 8:05 PM

RoundtheDiamond87 said…
I don't know how that Sosa got a 10; it's diamond cut. Don't forget to go after the Topps Traded, Topps Debut, Topps Wax Box Cards, and Topps Award Winners sets for that year. Maybe even the Glossy Send-ins, Glossy All-Stars, and Glossy Rookies too. I love the 1990 set. Look at the inner border closely. They all match the team colors.
March 28, 2017 at 9:46 PM

Billy Kingsley said…
I am probably the only one on the blogosphere but that is my favorite Topps baseball set of all time. Mark Hoyle sent me a 200 count box packed to the gills and I am doling them out slowly to prolong the enjoyment.
March 28, 2017 at 10:33 PM

Don said…
I have fond memories of 1990. That was the year that me any my newlywed would go to card shows and buy boxes of 1990 cards and we completed all but the leaf set by hand that year. Leaf was just to expensive for us to buy back then. I still have not become motivated enough to complete that set. Oh, I forgot to mention . Back in 1990 you could buy unopened boxes of this stuff at your local Sam's club.
March 28, 2017 at 10:45 PM

GCA said…
I was like you and had no aesthetic draw to the '90 set. Late last year, my friend got two wax boxes of it and we made two sets in the space of about three days. No blank Frankies, though. We put all the gum in a jar for some reason.
March 29, 2017 at 8:59 AM

Base Card Hero said…
Well, I am impressed. I have just a few Topps flagship sets completed... and all are from the last few years. Topps should at least send you a t-shirt... or something.

And that Canseco has all the right colors.

acrackedbat said…
what an awful year for design! UD is about the best option as far as beauty goes. Well, at least this won't be a long-suffering event for you with most of the set complete!
March 29, 2017 at 4:46 PM