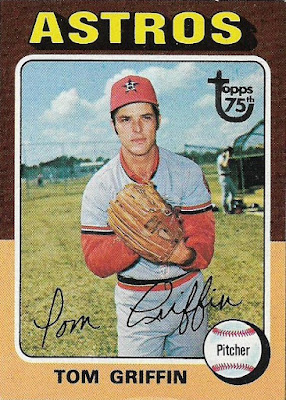 If you've been reading this blog long enough you know the routine:

March arrives in a blaze of burning dumpster fires of all shapes and sizes. I dodge said fires the best I can. If I get to the end of the month alive, I buy a few cards to celebrate.

Guess what? It's the end of the month. I'm still alive. I bought cards to celebrate!

Per usual, it's just a few because who has the time? Plus there's a card show on the horizon, so I need to stock up.

My annual "good riddance" purchases usually focus on whatever whimsical cards catch my fancy. And this year was no exception. 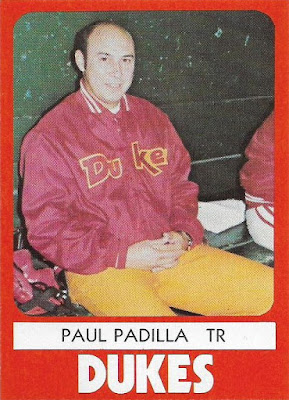 It is my goal to obtain all of the 1980 TCMA Albuquerque Dukes cards I can. I've loved the border design since I was a wee one and many of the players on the team then were the first Dodger prospects I ever knew. But this card is particularly special because what do I mention first?

Is it the bald-headed guy you'd never expect to see on a baseball card? Is it the mustard slacks? Is it the strawberry satin jacket declaring Paul Padilla The Duke? Is it the first time I've ever seen an abbreviation for the word "trainer"?

I must take a minute to compose myself. 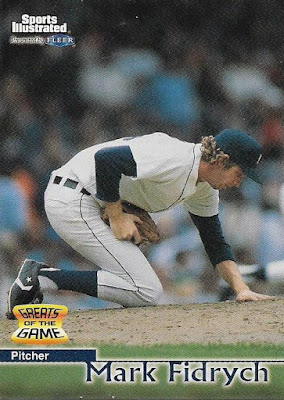 Here is the card I showed a few posts ago. You'll be happy to know it arrived safely. I'm a little bit disappointed the back does not describe what The Bird is doing here. People pulling this card in the late 1990s may have been baffled by the image of Fidrych making the mound look pretty. 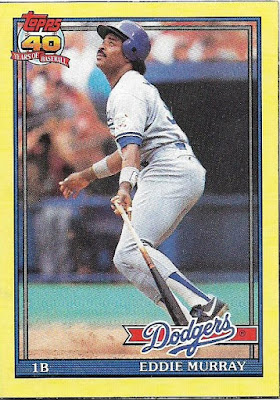 I was alerted to the arrival of this card on my favorite online card-selling site by a Twitter friend and Eddie Murray collector who I believe is no longer on Twitter. He spotted it on COMC and had a mutual friend contact me about it. That's so awesome.

This is a box bottom from 1991 Topps and completes the box-bottom Dodger trifecta of Murray, Alfredo Griffin and Juan Samuel. 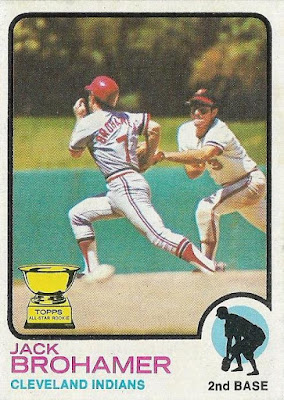 When purchasing cards so close to a card show I try to avoid cards that I'm sure will be at the show. This is one of those cards. However, I couldn't resist mostly because of the cartoon on the back. 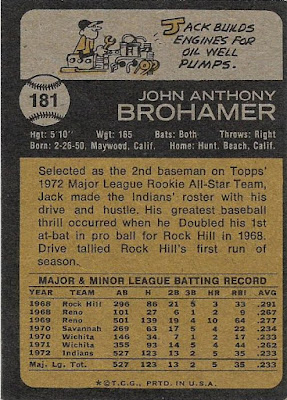 Never let a current ballplayer tell you how busy he is. 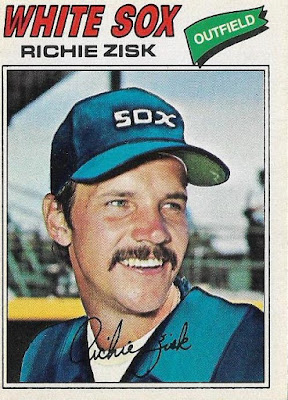 Several cards in this lot are the product of recent posts I made, including this one. After mentioning it earlier, I decided to finally start looking for the 1977 OPC variation cards. OPC was never finer than in '77. 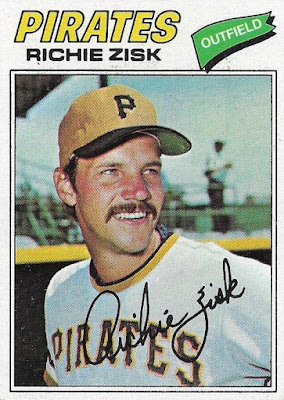 The signature change is interesting, along with everything else. 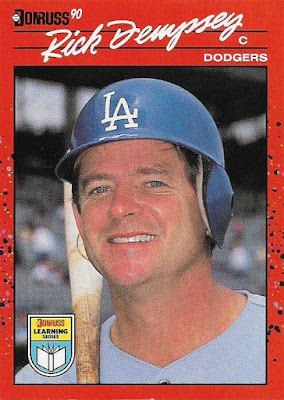 More weirdness discovered when researching a post. I stumbled across this card while writing about Rick Dempsey's cap-wearing habit.

This "Learning Series" was a 1990 Donruss issue that was published as part of teacher lesson plan for grade-school students. There's 55 cards and I am now aware I need to obtain the Fernando Valenzuela. I guess I'll never get to leave the land of junk wax. 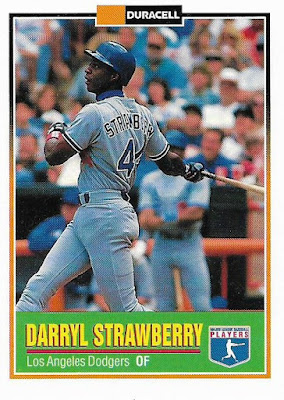 This card I knew about. Darryl Strawberry was one of 24 players in this 1993 Duracell series even though he managed to play in just 43 games in 1992. 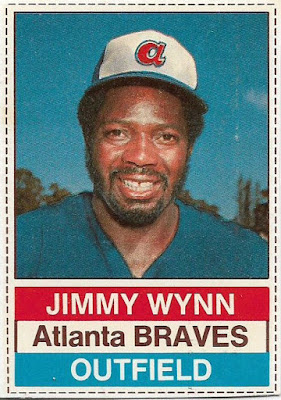 Another one for the 1976 Hostess quest. This card resembles the Card That Makes My Blood Boil. But Hostess went the extra step and painted Wynn's jersey blue. I don't find it any more convincing. 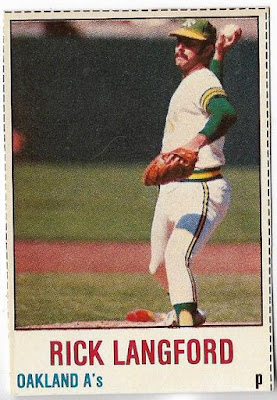 No idea how I came across this one. But I had to get it because outside of 1982 Fleer I don't know if I've ever seen so much wasted space on a card photo. (Dodger fans, insert your Chris Hatcher joke here). 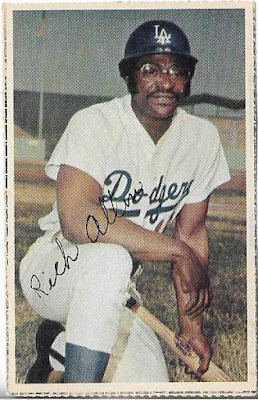 Not really a card. It's a 1971 Dell Stamp. I've begun to pick up the Dodgers from this set and I had to grab the Rich Allen item because there are so few collectibles with Allen as a Dodger. This is very cool!


OK, time for the grand finale (I told you I just got a few cards): 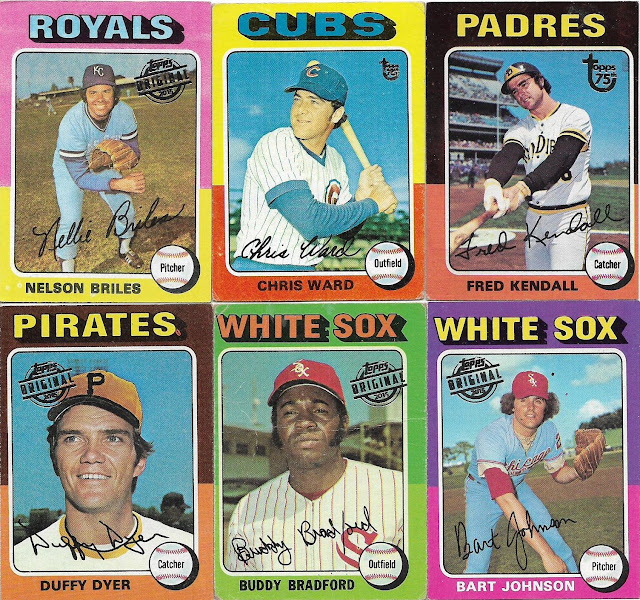 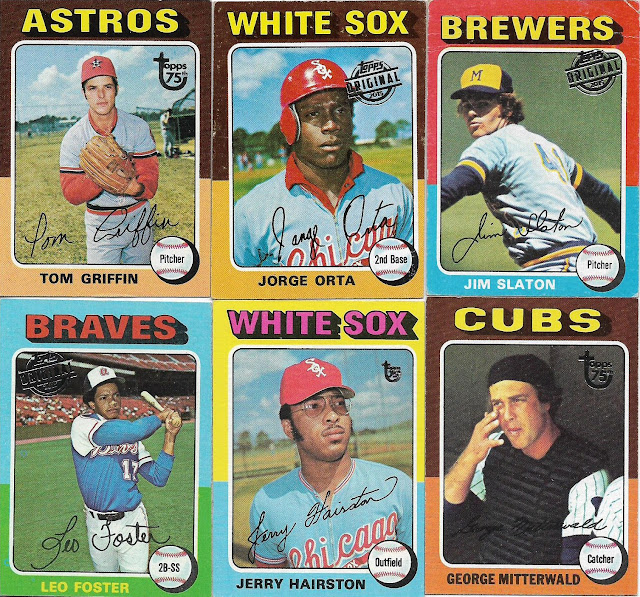 This gets me to 132 different buyback cards from this set. Happy Happy End Of March Dance!

I'll be able to get to 150 with absolutely no problem and I still think 200 buybacks from this set will be fairly easy before things start to get more challenging.

I suppose this is the kind of set that I said I didn't collect in the previous post. But I'm just doing this for fun and a bit of irony. I have no expectation of completing it.

That's what the end of March is all about. Saying goodbye and getting ready for some fun!

shoeboxlegends said…
Love those buybacks! Do you still need #127 Glenn Borgmann? I think I'd set it aside for you a while back and just found it tidying up this week. Drop me an email if you need it and I'll send it off your way.
March 31, 2017 at 8:08 PM

beefman said…
It's Awesome April here in Australia already, and Opening Day is just two short sleeps away. By far, the best time of year. Can't believe that it's been 3 years since I saw our beloved Dodgers play in Sydney! Congrats on getting through March, too, Mr. Owl ☺
March 31, 2017 at 11:02 PM

Zvon said…
I hate that Topps stamps the buybacks with the logo. To me it makes the card worthless. Anyone else feel this way?
March 31, 2017 at 11:03 PM

night owl said…
I don't approve of stamping vintage cards. Anytime I see a card from the '60s stamped, I cringe. I'm collecting the stamped '75s so these poor, stamped buybacks have a purpose again.
March 31, 2017 at 11:06 PM

beefman said…
I agree - stamping them devalues the cards to almost zero, in my opinion. It also makes unmarked originals a little bit rarer. So Topps can stamp any old cards - as long as I already own a copy!
April 1, 2017 at 2:31 AM

Stack22 said…
I'm not wild about it, but if they had done it in 1988 when I was 9, I would have thought it was the greatest thing ever.