Blog bat around: So difficult that I don't care

Another Blog Bat Around has snuck up on me, and it's kind of in my area of expertise.

"What is," Nachos Grande asks, "the hardest set that you have ever collected (or tried to collect)." I'm going to assume that by "hard," he means "difficult" and not "made out of granite" (OK, night owl, don't be a jerk).

This Blog Bat Around is directed at set collectors, of which I am one. But it focuses on something that I try to avoid. I intentionally do not try to complete sets that might be difficult. I don't need challenges like that in my life. I have a job. I have a family. I have a teenager and a dog and a government and parents and a neighborhood and 78 passwords that I MUST CHANGE IMMEDIATELY. I don't need difficult challenges in a hobby that's supposed to be fun.

So I intentionally avoid trying to complete a tobacco mini set from 1904 or every 2016 parallel of Kris Bryant. My completion quests are much more manageable (with the exception of '56 Topps which is just too beautiful to not at least attempt). If it's going to be "hard," then never mind. I'll find something much more agreeable.

I've done this for a number of years now. But when I first got back into the hobby, I didn't know any better.

In 2006, my first time really collecting since the early '90s, I picked up where I left off and collected the way I did when I was a kid. I started to gain more and more knowledge about how the hobby worked and then I discovered blogs and gained even more knowledge.

I also stumbled across something called a "short-print".

When I first decided to try to complete 2008 Topps Heritage, I don't think was fully aware of what a short-print was. But I found out soon enough. And as the pages in the binder began to fill up, there were certain slots that always remained empty. Those were where the intentionally short-printed cards would go.

This was my first encounter with the nature of Heritage. Back then, short-prints weren't reserved for the back of the set. They were distributed throughout. So if you put your pages in a binder, interrupting beautiful page after page like this ... 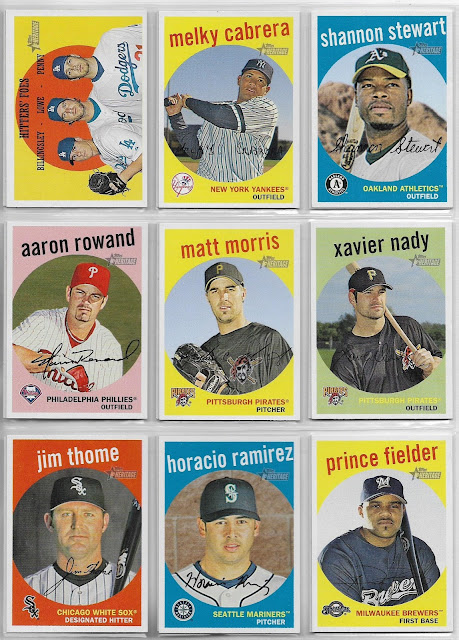 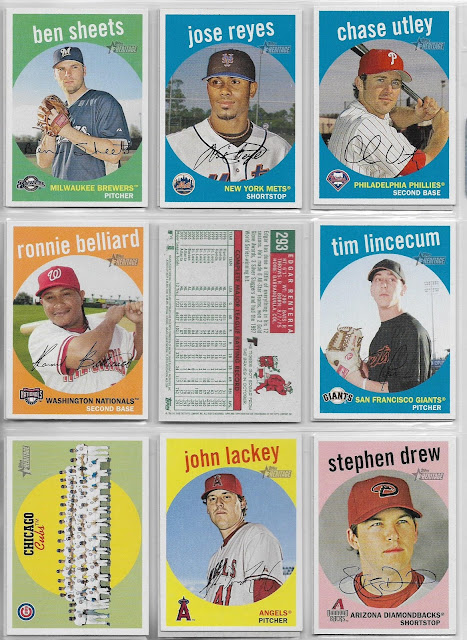 ... smack in the middle of the set! (I double-bag my pages, so you're just going to have to get used to seeing the back of a card in the empty slot).

The higher you go in the set, the more painful it gets. 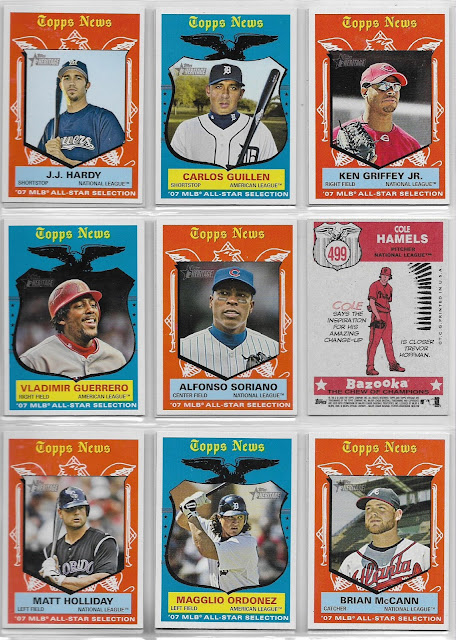 This beauty is just one card short. Ouch.

But for years now -- almost a decade -- this set has sat incomplete. I've needed nine cards to finish it for ages.

This is the set that caused me to decide to never try to complete another Heritage set again (until 2024, of course). The short-prints are just too time-consuming for someone with all of the activities and responsibilities I mentioned at the top of the post. I don't need a challenge like this. I like my card challenges to be 660 or 792 cards that are obtainable equally. Or, if you must short-prints stuff, do it like A&G, where it's not an investment to obtain the cards.

Probably years have gone past since I've thought about trying to complete this set. It's been so long that there are players in 2008 Heritage that are long forgotten by time. 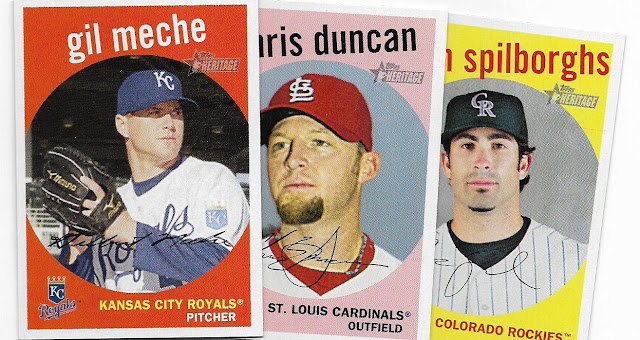 And there are other cards that are so out-of-date, they might as well have been issued in 1959, the set that '08 Heritage is referencing. 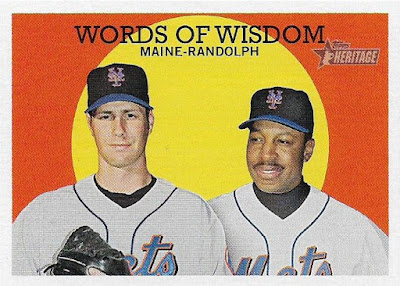 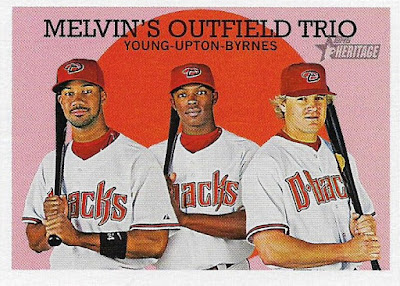 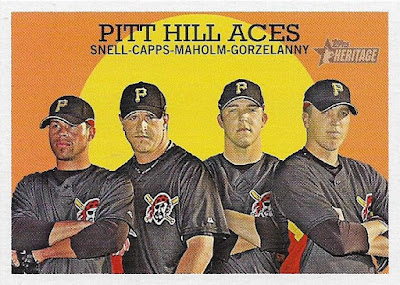 I couldn't even tell you, without looking it up, which card numbers I need or who is on those cards.

That's how much I've put this out of my mind. The set was such a pain to complete, I just don't care.

I was a newbie in 2008, so not only did I try to complete Heritage that year, but I tried to complete the Stadium Club reboot and Upper Deck Timeline. Both of those other two sets are notorious as far as completion. I gave up on Timeline and started trading some of the cards away. I haven't done the same with Stadium Club, but I'm still seven cards short and have given it about as much thought as 2008 Heritage. 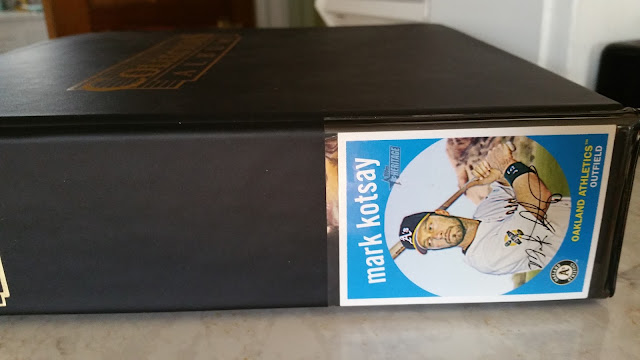 So the question is: do I want to complete 2008 Heritage?

Yeah, actually I do.

It's way down on the priority list, so far down you'll have to scroll a few times. But at least it's still there.

When/if I do complete it, I won't hold a party or be all that thrilled. The set's moved too far away from my heart for that.

That's what happens when you make a set that difficult to complete. It's not worth it. My time is valuable and card companies should know that. I will not bow to their artificially short-printed tricks if I deem them too time-consuming.

I may be a hopeless collector, but I still have the power and I know that.

Make it too "hard," and I'll stop caring.

Johnnys Trading Spot said…
I second that motion. Um, statement/declaration/promise. The intentional SPs in the middle of a set suck. At least at the end of a set I can choose to call it complete without the SPs, and I do. When they are scattered, I already don't care if I get them, they can sit on the ole want list forever if need be. If I wind up with one it is usually because someone sent it to me.
March 30, 2017 at 10:22 PM

GCA said…
2008 is the only Heritage I've ever completed. It's the first one I tried since it is the '59 design, which I rank comparably to you and the '75s. It took me until about 2016 to do it. I've since somehow become a Heritage collector, but mostly just the base sets, because I've traded bulk lots to get them. I don't even bother with the inserts most of the time either because they're always the same. When I'm fortunate enough to find 'em cheap or be traded shortprints, I'll take them. But like you said, it shouldn't have to be an investment. There are many other non-short-print-saturated sets to go after that are just as fun as Heritage.
March 31, 2017 at 9:20 AM

Fuji said…
This post helped me out with a huge dilemma that I recently stumbled upon. I have always enjoyed putting my completed sets in binders... and the entire time I've used the 9 cards per page technique. I like being able to look at the card backs... plus I've been brainwashed into thinking that putting two cards into a slot would somehow damage the cards. Last month, I picked up a set that won't fit into a binder comfortably unless I "double-bag" it. I kept going back and forth on whether or not I should break years and years of tradition and was leaning on just keeping the set in a box. But maybe it's finally time to try something new.
April 1, 2017 at 11:11 AM